Hereditary diffuse gastric cancer (HDGC) is an inherited form of gastric cancer that carries a poor prognosis. Most HDGCs are caused by an autosomal dominant genetic mutation in the CDH1 gene, which carries a 70%-80% lifetime risk of gastric cancer. Given its submucosal origin, endoscopic surveillance is an unreliable means of early detection, and prophylactic gastrectomy is recommended for CDH1 positive individuals older than age 20 years. We describe the case of a male with recurrent gastric cancer who was diagnosed with HDGC secondary to the CDH1 mutation, and we also describe the patient’s pedigree and outcomes of recommended genetic testing.

Core tip: Individuals who carry the CDH1 gene mutation are at very high risk of acquiring hereditary diffuse gastric cancer, a cancer with a high mortality if not detected early. The clinical findings we describe in this case may aid medical practitioners in the assessment and testing of patients with a family history of gastric cancer and raise awareness about the importance of genetic testing for this condition.

Gastric cancer is the fifth most common cancer and the third leading cause of cancer related death worldwide[1]. While most gastric cancers occur from sporadic mutations, inherited gastric cancers make up 1%-3% of cases and are referred to as Hereditary Diffuse Gastric Cancers (HDGC)[2]. The majority of HDGCs are caused by an autosomal dominant inheritance of an abnormal copy of the tumor suppressor gene CDH1. As the CDH1 gene has a high penetrance, mutations produce a multi-generational cancer syndrome that affects multiple organs[2]. The CDH1 gene mutation causes a 70%-80% life time risk of gastric cancer in both men and women and a 40%-60% life time risk of lobular breast cancer[2,3]. Unfortunately, detection based on gastrointestinal symptoms and endoscopic surveillance has a poor prognosis. Therefore, the International Gastric Cancer Linkage Consortium (IGCLC) recommends prophylactic gastrectomy in individuals with the CDH1 gene mutation between ages 20 to 30[2]. It is therefore imperative that patients with a family history of gastric cancer have a comprehensive family pedigree reviewed and undergo genetic testing for the presence of HDGC if they fit the criteria proposed by the IGCLC.

In this report, we describe the case of a Caucasian male who was found to have the CDH1 gene mutation and diagnosed with HDGC. We also describe the results of his family members’ genetic testing.

At age 49, the patient presented with abdominal fullness and was found to have gastric signet ring adenocarcinoma, and was treated with a partial gastrectomy (Billroth II). The patient had no evidence of metastatic disease at this time as evidenced by normal CT scans. The patient subsequently underwent triennial esophagogastroduodenoscopies (EGD) for surveillance of cancer recurrence. In 2012, at the age of 58, a surveillance EGD was performed with random biopsies taken from normal appearing mucosa in the gastric cardia, fundus, distal body, and anastomosis site. Only the biopsy from the distal gastric body revealed adenocarcinoma with signet cells; all other biopsy specimens were negative for cancer related pathology. Endoscopic ultrasound was performed and did not reveal any submucosal or mucosal aberrations. PET/CT showed no areas of increased activity suggestive of metastatic disease. 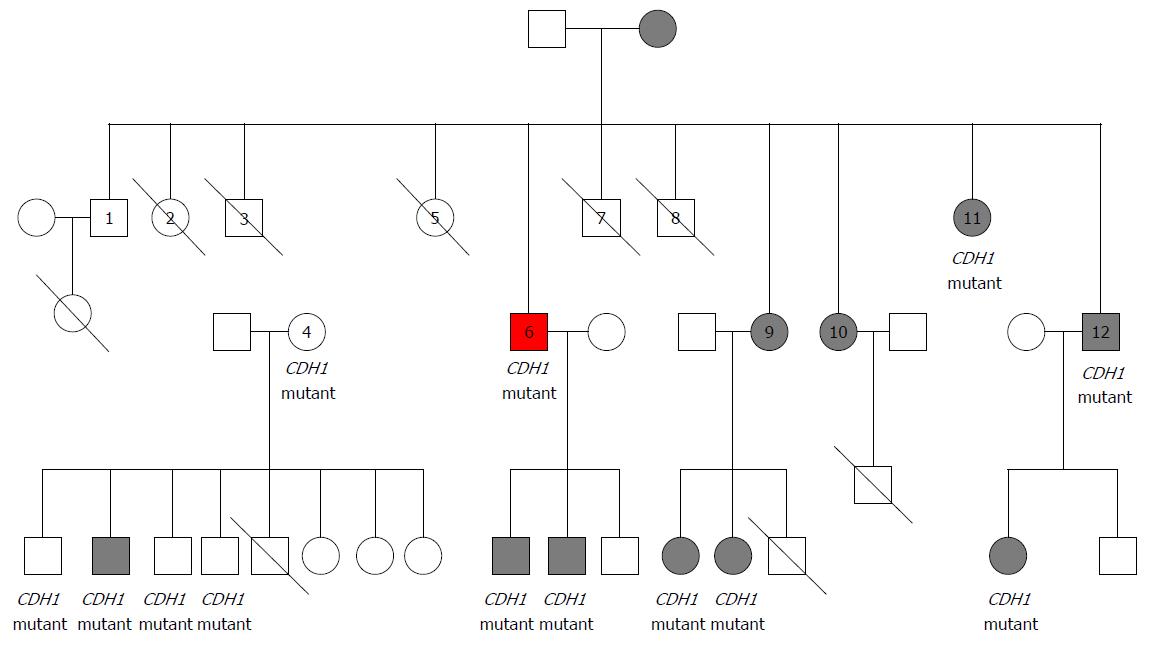 The patient underwent total gastrectomy, with lymph node sampling. The pathologic specimen showed a 0.6-cm tumor in the lesser curvature of the stomach with invasion into the lamina propria. Histologic analysis showed a poorly differentiated signet ring cell carcinoma (Figure 2), grade 3. Immunohistochemical stains for mucicarmine and keratin AE1/AE3 highlighted the signet ring cell carcinoma. No additional staining was performed. All 16 sampled lymph nodes were negative for pathology, and staging was deemed T1a.

The patient underwent a gene panel for known mutations linked to gastrointestinal cancers. The DNA sampled was from the patient’s lymphocytes and next-generation sequencing was used. The patient tested positive for the CDH1 gene with aberration in the c.521 dvpA and the STKII gene had a mutation of unknown significance with aberration in p.5354L. Testing for lynch syndrome and familial adenomatous polyposis syndrome were negative. Given the defined mutation, and with the patient’s encouragement, many of the patient’s family members underwent genetic testing.

The patient’s pedigree is shown in Figure 1. In total, 21 of the patient’s relatives underwent genetic testing, of which 12 were found to have the CDH1 gene mutation, including two of the patient’s sons. Of these 12 relatives, 8 underwent prophylactic gastrectomy, despite having no concerning gastrointestinal symptoms. At the time of gastrectomy all 8 family members had evidence of gastric cancer when pathological specimens were histologically analyzed.

HDGC, unlike the sporadic forms of gastric cancer, is composed of signet ring cells and originates diffusely throughout the gastric submucosa[4-6]. The sporadic form of gastric cancer is usually associated with Helicobacter pylori infection, which can lead to gastric atrophy and intestinal metaplasia[4,5,7,8]. Often with Helicobacter pylori associated gastric cancer, cells are arranged in a gland-like formation and begin in the mucosa[4,5,7,8]. As occurred in this case, the cancer found in HDGC related cases is usually poorly differentiated, which is a direct result of the CDH1 gene mutation. The CDH1 gene, located on chromosome 16, codes for E-cadherin, a calcium dependent cellular adhesion protein that is instrumental in maintaining epithelial cell structural integrity[2,5,6]. When this gene is mutated, the decreased E-cadherin expression promotes atypical cellular architecture and irregular cell growth, ultimately leading to cancer development[2,5,6].

The mutation in the CDH1 gene can occur sporadically or can be inherited through an autosomal dominant inheritance pattern. The CDH1 gene is a tumor suppressor gene and thereby requires a second hit, a somatic mutation in the second E-cadherin allele, in order to cause cancer progression. In individuals with germline mutations of CDH1, the second hit has been shown to occur mostly through CDH1 promoter hypermethylation, with fewer instances of loss of heterozygosity[9,10]. One study found that no additional somatic mutations beyond promoter hypermethylation in those with germline CDH1 mutations were required for cancer formation[9].

Because HDGC originates as discrete foci in the gastric submucosa, it produces no grossly visible architectural changes[2,6]. The presence of cancer as a result is hidden in its early stages on endoscopy and nearly impossible to detect with sampling by random biopsies[2,6]. Currently there is a lack of evidence regarding the timing of metastatic signet ring gastric carcinoma, though evidence suggests that there may be a dormant period before metastasis[11,12]. The progression of diffuse gastric cancer seems to be particularly aggressive in young individuals, as only 10% of those under age 40 who develop symptomatic and invasive diffuse gastric cancer have curable disease[12,13]. Thus the IGCLC recommends that individuals with the CDH1 gene mutation, even without evidence of gastric cancer, undergo prophylactic total gastrectomy between ages 20 to 30 years, rather than surveillance endoscopy[2] (Table 1). If a person is unwilling to undergo prophylactic gastrectomy, the IGCLC recommends intensive endoscopic surveillance at an expert center[2]. Other means of early cancer detection have also been met with limited success; PET imaging has a high rate of false negatives in mucinous cancers, such as occurs in HDGC[14].

Given the low yield of random biopies and the negative PET scan, our patient was highly fortunate that the random biopsy taken in the distal gastric body revealed the presence of cancer. This is especially lucky given the patient’s intact gastric mucosal appearance on endoscopy and the normal biopsies taken in the other gastric locations. At the time of gastrectomy, our patient’s cancer was staged a T1. Thus, our patient’s cancer was effectively caught early, before it metastasized. Furthermore, the 70%-80% penetrance[2] of the CDH1 mutation coupled with the patient’s diagnosis of gastric cancer 10 years prior and the death of 3 family members due to metastatic gastric carcinoma, suggest that the patient’s cancer would have ultimately progressed if it had been left undetected.

Due to the difficulty in early detection, the high penetrance of the CDH1 gene, and the early onset of incurable disease, genetic testing is the only beneficial means of detecting and preventing HDGC in individuals with a family history. The IGCLC therefore recommends CDH1 genetic testing in all individuals who meet one of the following criteria: 2 or more cases of gastric cancer in a family with 1 confirmed diffuse type in 1st or 2nd degree relatives independent of age, presence of diffuse gastric cancer in an individual less than age 50, and personal or family history of diffuse gastric cancer and lobular breast cancer with one of the diagnoses before age 50[2]. Genetic testing may also be considered in individuals with bilateral lobular breast cancer under the age of 50 or in families with multiple members with lobular breast cancer (with two of these relatives younger than 50 years)[2]. As the CDH1 gene mutation has also been linked to cleft lip and palate, the IGCLC suggests that genetic testing may be considered in families with a history of cleft lip/palate and diffuse gastric cancer[2].

Given the risk of lobular breast cancer, the IGCLC recommends breast screening from age 30 (composed of annual clinical breast exams and bilateral MRIs)[2]. The IGCLC does not recommend prophylactic mastectomy in individuals with the CDH1 mutation, though suggests that mastectomy can be considered on a case by case basis[2]. Colon cancer screening is recommended only in families with HDGC related colon cancer starting at age 40 or 10 years younger than the affected individual[2].

A 58-year-old male with a past medical history of gastric signet ring adenocarcinoma, treated with partial gastrectomy, presenting to our practice for triennial esophagogastroduodenoscopies (EGD) for surveillance of cancer recurrence. Patient’s family history was significant for 3 first degree relatives with gastric cancer. EGD performed showed normal appearing mucosa, though biopsy from the distal gastric body revealed adenocarcinoma with signet cells.

Patient was asymptomatic at diagnosis.

The patient underwent a gene panel for known mutations linked to gastrointestinal cancers. The patient tested positive for a mutation in the CDH1 gene which confirmed the presence of hereditary diffuse gastric cancer.

Examination of the pathologic specimen after total gastrectomy, confirmed a 0.6-cm poorly differentiated signet ring cell carcinoma in the lesser curvature of the stomach with invasion into the lamina propria.

The patient underwent total gastrectomy. The patient encouraged genetic testing in his 21 family members, of which 12 were found to have the CDH1 gene mutation.

There are currently other case reports of families with the CDH1 gene mutation, though none with as extensive a family pedigree.

HDGC is an inherited form of gastric cancer, with majority caused by an autosomal dominant genetic mutation in the CDH1 gene.

This case highlights the importance of gathering a thorough family history, especially as it relates to gastric cancer, and encouraging genetic testing in patients who meet the International Gastric Cancer Linkage Consortium criteria.