A 47-year-old female with 3 years of pain in the right lower quadrant and discovery of a pelvic mass 13 d ago underwent open abdominal exploration. In the right broad ligament, a solid mass with well circumscribed boundaries, approximately 15 cm × 10 cm × 10 cm in size was bluntly peeled off. The pathological result was a spindle cell tumor, morphologically considered to originate from smooth muscle. Immunohistochemical results supported a deep soft tissue leiomyoma.

Retroperitoneal leiomyoma is a rare benign tumor, and surgical treatment can have a good therapeutic effect.

Leiomyoma is a benign non-epithelial mesenchymal monoclonal tumor that originates in myoblast smooth muscle cells or muscle vessel walls or interstitium composed of fibrous connective tissue[1]. The most common type of these tumors is uterine leiomyomas, most of which are located posterior to the visceral peritoneum (serous membrane) of the uterus and occasionally in the pelvic or posterior peritoneal wall of the abdomen[2]. The signs and symptoms caused by uterine leiomyomas include pain, flatulence, menstrual irregularities, infertility, and uterine bleeding during the postmenopausal period. Retroperitoneal-abdominal leiomyomas are similar to uterine leiomyomas, but are relatively rarer, with more than 100 cases described in the literature since 1941[2]. They consist of elongated smooth muscle cells, occasionally arranged in a cord or reticulated arrangement. Compared to the most common uterine leiomyomas, the pathological features are similar to those of uterine leiomyomas, but the pathogenesis is unclear and the cytogenetics and molecular genetics of the tumor are almost unknown.

The patient had pain in the right lower quadrant for 3 years, aggravated recently, and a pelvic mass was found at our outpatient clinic.

The patient had pain in the right lower quadrant three years ago without an obvious precipitating cause, but she did not seek medical advice. The pain was aggravated after activity 2 mo ago, and she was examined in our outpatient clinic 13 d ago.

The patient had previously been in good health.

The patient had 2 pregnancies, 1 birth, and 1 daughter in good health. Her menstrual cycle was regular.

Ultrasound results were as follows: preutertal position, approximately 59 cm × 50 cm × 50 cm in size, uneven echo of the uterine muscle wall, unclear contour of the right wall and posterior wall, uneven echo of the endometrium, thickness of 12.5 mm. Color ultrasound examination showed that the right adnexal area demonstrated a mixed echo of 16 cm × 10 cm × 10 cm. It was considered as uterine leiomyoma based to the ultrasound images. 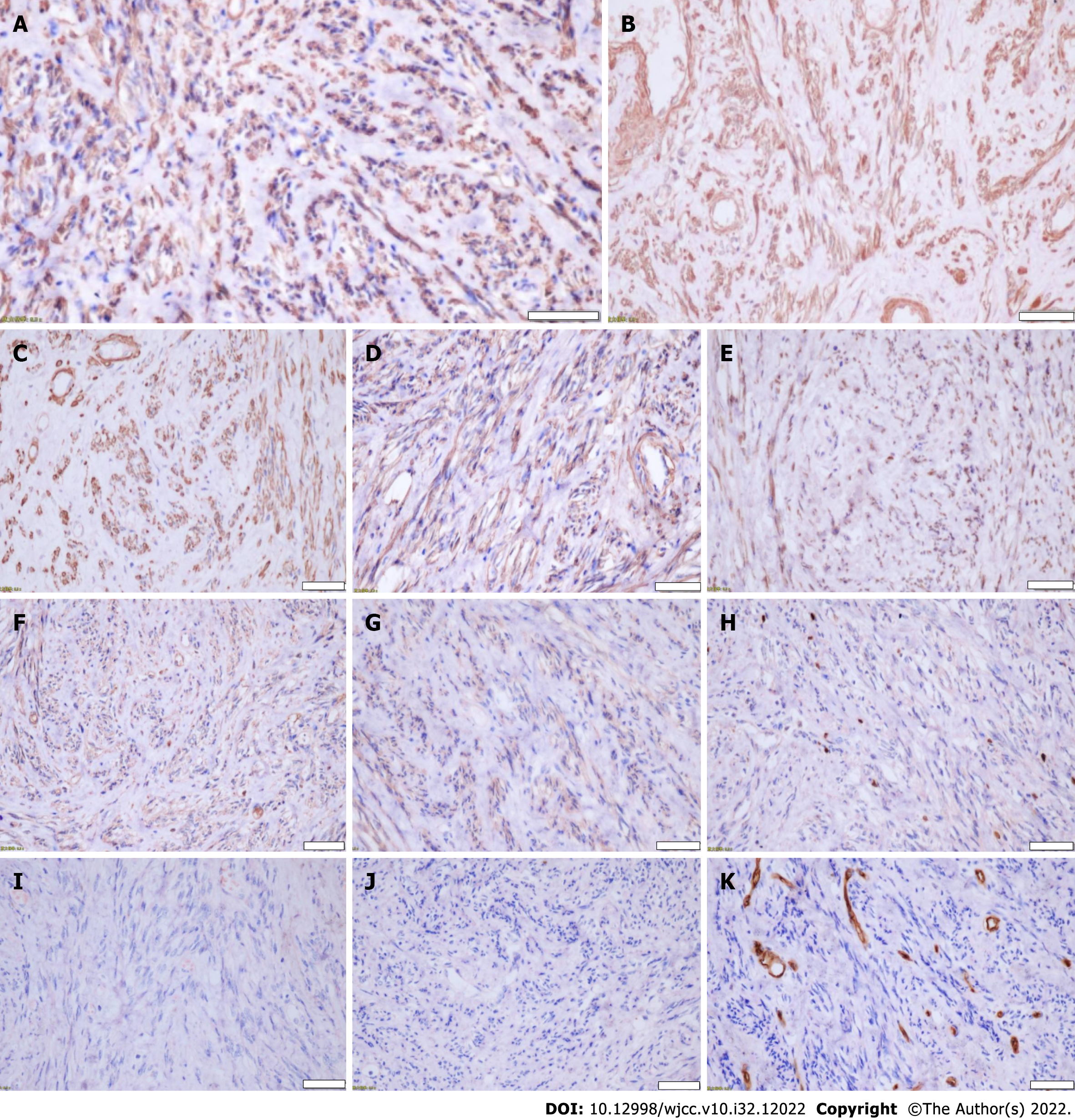 Retroperitoneal leiomyoma was diagnosed based on the pathological and immunohistochemical findings.

With the active cooperation of the patient, surgical resection was finally performed with good recovery.

At 8 mo follow-up, there were no signs of recurrence of the tumor.

We would like to thank the patient and her family members for their contributions to this report.