A 31-year-old female was admitted to the department of gastroenterology with a chief complaint of discontinuous hematochezia for 2 years. No previous history, accompanying diseases or drug use was reported. Physical examination and colonoscopy showed grade II internal hemorrhoids. The patient received ERBL therapy. Five days after ligation, the patient presented with mild hematochezia. On days 7 and 9 after ligation, she presented with a large amount of rectal bleeding, dizziness and weakness. Emergency colonoscopy revealed active bleeding and an ulcer in the anal wound. The patient received two sessions of hemoclipping on days 7 and 9 to treat the bleeding. No further bleeding was reported up to day 15 and she was discharged home. Although the hemorrhoid prolapse disappeared after ERBL, she was dissatisfied with the subsequent complications.

Here, we report on a case of internal hemorrhoid therapy which caused rare massive hemorrhage after ERBL. Furthermore, we reviewed the latest article involving the effects and complications of ERBL hoping to provide clinical reference for this therapy.

A 31-year-old Asian female presented with a chief complaint of discontinuous hematochezia for 2 years at the Department of Gastroenterology.

The patient generally had lower gastrointestinal bleeding occurring at the end of defecation 3-4 times per week along with several drops of bright red blood in the past 2 years. She frequently experienced prolapsed hemorrhoids that automatically retracted after defecation. Her stool habit was normal with a frequency of 1-2 times per day. The patient adjusted her lifestyle by reducing sedentary behaviors, stress and maintaining regular stool habits. However, these measures failed to improve her symptoms. Warm water baths and ointments could temporarily reduce bleeding but the patient was dissatisfied and required more aggressive treatment which included endoscopic therapy.

No other previous history or accompanied diseases were reported. The patient denied any use of anticoagulant or antiplatelet drugs.

The patient denied any history of smoking, alcohol use or food and drug allergies. She had no family history of gastrointestinal tumors or genetic diseases.

The patient’s temperature was 36.2 °C, heart rate was 80 bpm, breath rate was 18 bpm and blood pressure was 126/82 mmHg. Examination of the chest, lungs and abdomen showed no abnormalities. Examination of the anus showed prolapsed hemorrhoids during defecate movements (Figure 1A), and it was found to automatically retract after defecation. Digital rectal examination revealed enlarged hemorrhoids and no bloodstain was left on gloves. 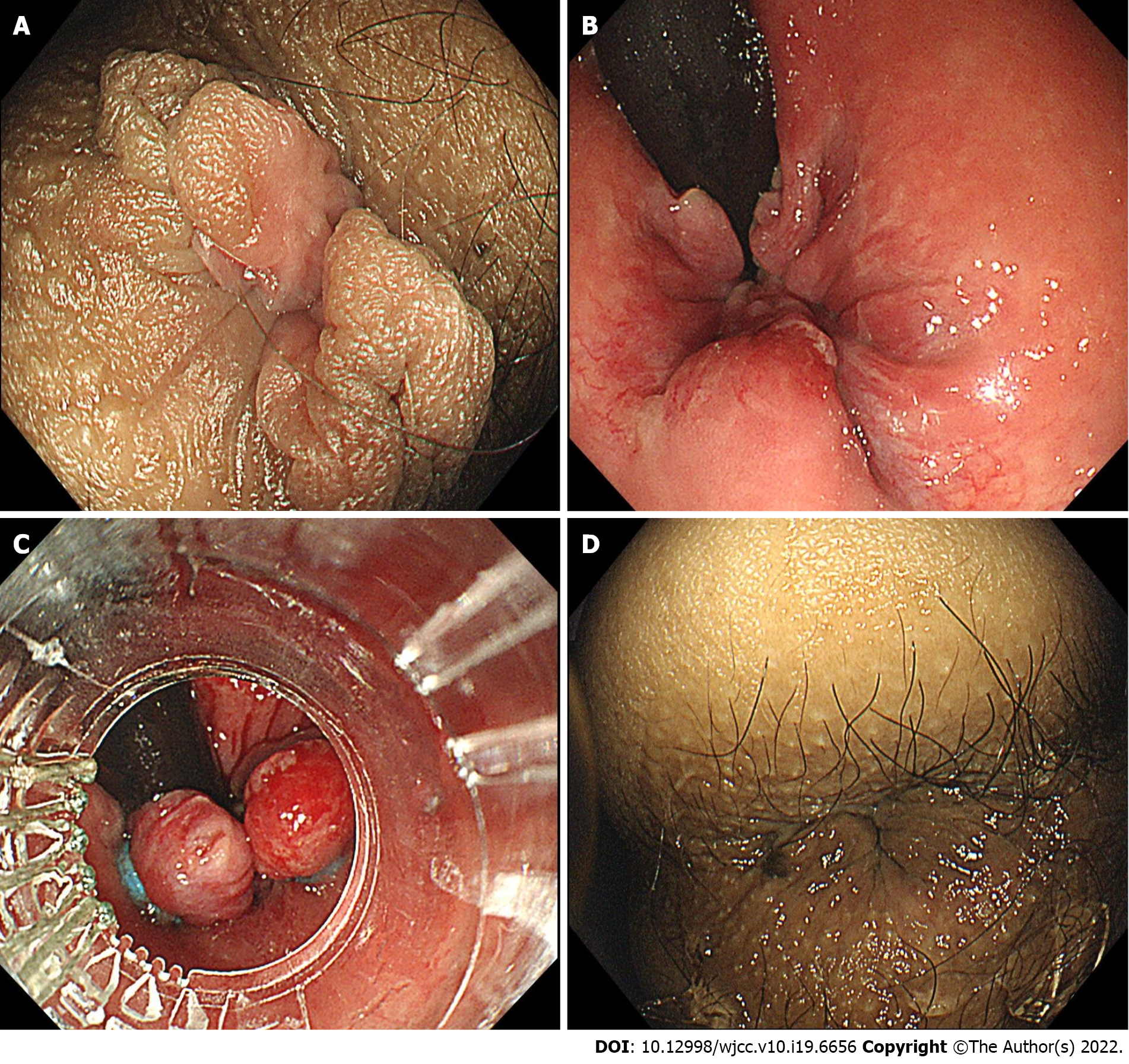 Regular preoperative examination, including routine blood work, liver and kidney function tests, coagulation function and electrocardiography was performed before ERBL. The patient’s hemoglobin (Hb) was 112 g/L and no other abnormal results were reported.

The patient was diagnosed with grade II internal hemorrhoids and mild anemia.

For the convenience of the patient, we performed ERBL with endoscopic examination continuously. In order to manage the patient with better postoperative care, the patient underwent hospital admission. Following the colonoscopy examination, the patient was treated with ERBL therapy using Multiple Band Ligator (Boston Scientific, Speedband Superview Super 7TM, 7 Bands). Five rubber bands were applied to the hemorrhoids (Figure 1C). She received Diprivan (Propofol Injection, 20 mL, 200 mg) for anesthesia during the endoscopic examination and ERBL therapy to avoid intraoperative pain. After ligation, the prolapsed hemorrhoid tissue was withdrawn into the anus (Figure 1D). After ERBL, the patient was advised to take a light diet to avoid bleeding and oral laxatives (10 mL, tid) were given to soften the stool.

On day 7 after ligation, she was sent to the emergency department with significant painless fresh rectal bleeding of approximately 400 mL, accompanied by systemic symptoms of dizziness and weakness. Emergency colonoscopy showed active oozing of blood in the anal wound (Figure 2A). Endoscopic electrosurgical hemostatic forceps (FD-410LR, Olympus Corporation) was used first. However, it failed to stop the active bleeding. Then two hemoclips (ROCC-D-26-195-C, Micro-Tech (Nanjing) Co., Ltd, Maximum Span width = 10 mm) were applied to stop the bleeding. Finally, the patient was sent to the ward safely with a Hb level of 93 g/L (Figure 3). However, early on day 9, she suddenly presented with large amounts of rectal bleeding of over 800 mL and fainted during defecation. Blood pressure was 95/50 mmHg and pulse was 116 beats/min. Resuscitation with oxygen and intravenous fluids with electrolyte solution was initiated. She was immediately sent to the endoscopic department under electrocardiographic monitoring. Emergency colonoscopy showed that all rubber bands had slipped off leaving multiple bleeding ulcers in the anal wound (Figure 2B). Ischemic necrotic tissue containing 1 hemoclip was removed by forceps (FG-32L-1, Olympus Corporation), and 3 more hemoclips were placed and successfully stopped the bleeding (Figure 2C). The patient received fluid infusion for symptomatic treatment and omidazole (200 mg qd iv) was used to prevent infection. Although the routine blood test revealed a Hb of merely 67 g/L (Figure 3), the patient refused blood transfusion. No further bleeding was reported until 15 d after ligation. A re-examination by colonoscopy on days 12 and 15 showed a gradually healed wound covered by ischemic scabs (Figure 2D and E). The patient was discharged home with moderate anemia and her Hb was 74 g/L (Figure 3). Although hemorrhoids prolapse disappeared after ERBL, she was dissatisfied with the subsequent complications. The duration of the hospitalization was 17 d, and the cost of the procedure was 1500$, including endoscopy + ligation therapy (800$), drugs (200$) and hospitalization (500$). 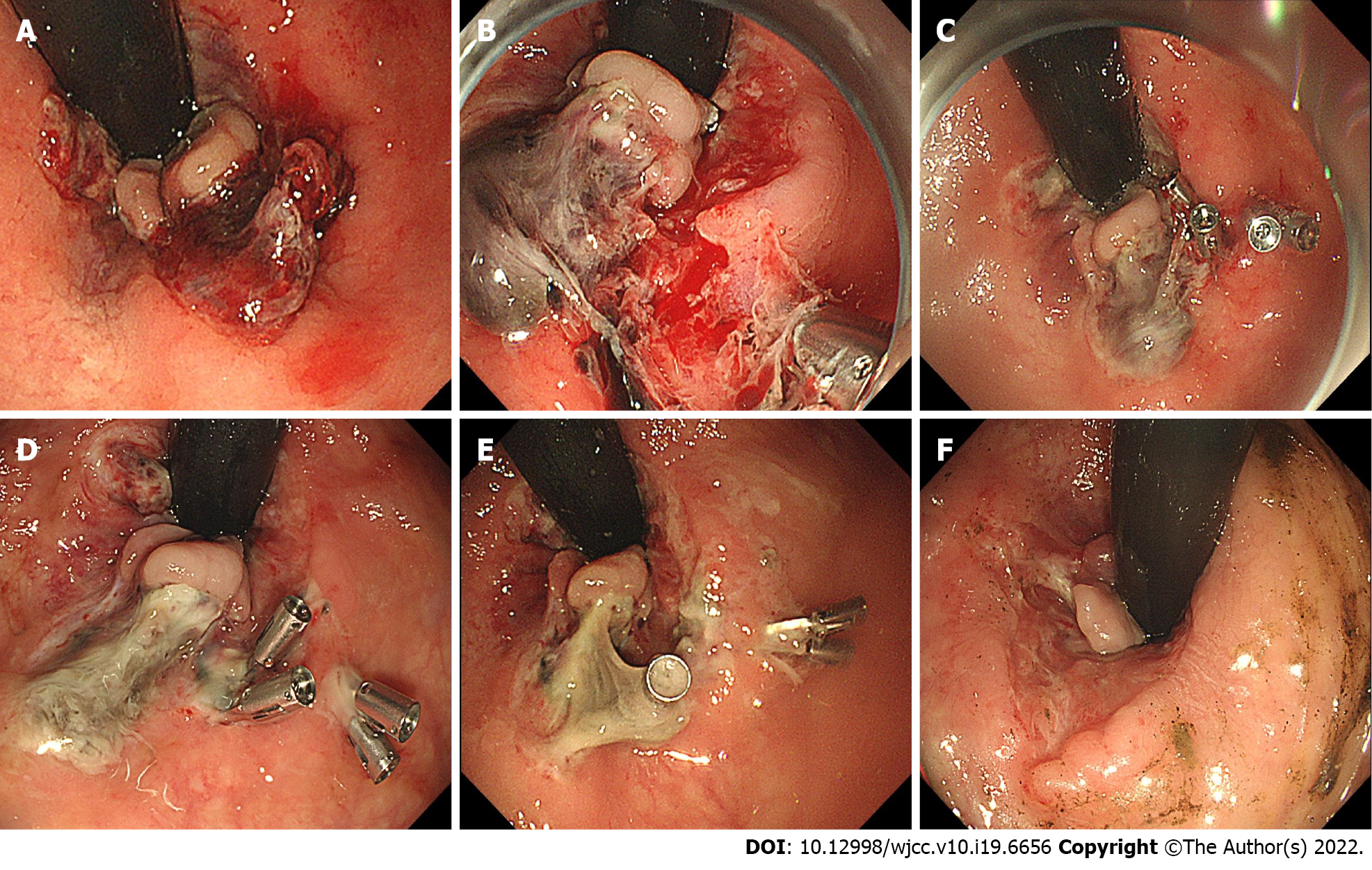 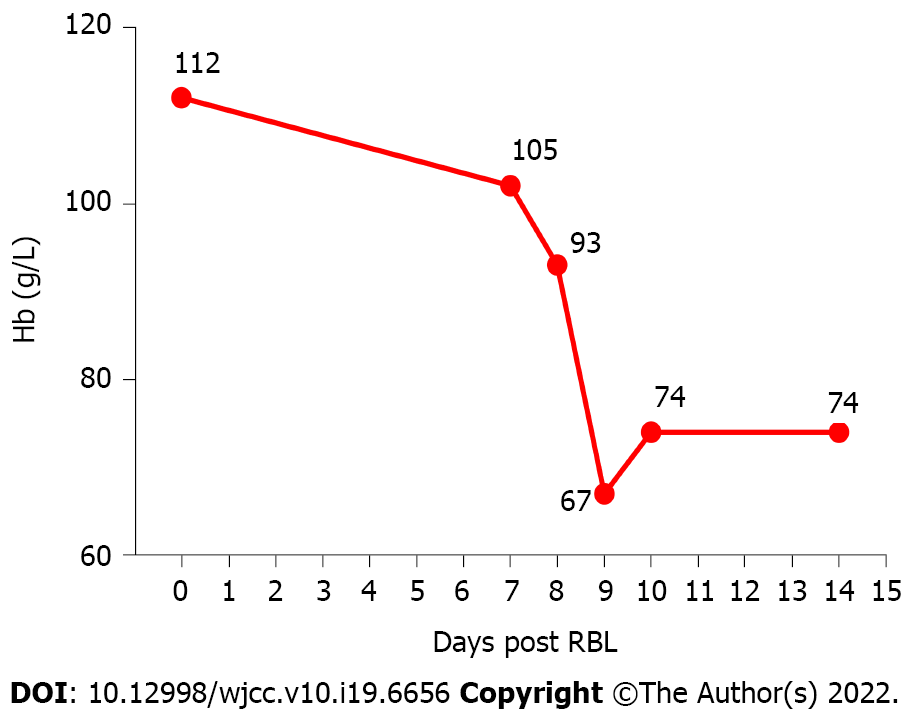 Figure 3 Curve of hemoglobin before and after endoscopic rubber band ligation therapy.

The use of RBL on internal hemorrhoids by grasping the hemorrhoidal tissue with an elastic rubber band and this ligation causes ischemic necrosis and cicatricial fixation of the hemorrhoidal tissue. Compared with surgical methods such as excisional hemorrhoidectomy, stapled hemorrhoidectomy and hemorrhoidal artery ligation, RBL with anoscopy causes fewer postoperative complications as well as a shorter hospitalization period[8-10]. Compared with other nonsurgical methods (sclerotherapy, infrared coagulation), RBL shows a higher efficacy and a lower recurrence rate and it is more effective for prolapsed hemorrhoids[10]. ERBL has been more commonly used in the treatment of grade I-III internal hemorrhoids. The therapeutic effects of ERBL have been verified by recent studies. In an observational study including 82 patients with grade I-IV internal hemorrhoids, Fukuda et al[11] reported a significant reduction in symptom scores within 4 wk after ERBL in the retroflexed position[11]. Su et al[12] enrolled 576 patients with grade II-IV internal hemorrhoids in a 1-year follow-up study which showed that 93.58% of patients experienced at least one grade reduction in the severity of hemorrhoids after ERBL[12]. Another follow-up study including 759 patients reported that 87.0% had controlled bleeding and 83.1% had controlled prolapse rates within 5 years[13]. These results indicated that ERBL is a simple and well-tolerated treatment for symptomatic internal hemorrhoids with satisfactory short and long-term recovery[12,13]. New devices for ERBL have been developed in recent years and the more flexible gastroscope and transparent cap are increasingly used to assist ERBL operation[14]. Paikos et al[15] reported that the O'Regan disposable bander device showed good response with low complication rates in outpatients with symptomatic hemorrhoids[15]. Su et al[16] demonstrated that both small (9 mm) and large (13 mm) diameter devices showed equivalent effects on 218 cases of grade II-IV internal hemorrhoids[16]. Furthermore, ERBL has been proven to be safe for certain patients including those with liver cirrhosis and portal hypertension[17,18].

Although the therapeutic advantages of ERBL on traditional RBL with anoscopy have not been evidently revealed, ERBL is increasingly preferred by operators. Endoscopy is strongly recommended to exclude other severe diseases including colorectal ulcers and cancer which share similar bleeding symptoms[19,20]. Simultaneous endoscopic examination with hemorrhoid treatments provides convenience for these patients. Flexible endoscopy is feasible for ligation in both forward-view and retroflexion. The advantage of the retroflexion procedure is its easy operation and controllability. Fukuda et al[21] demonstrated that using an endoscope in both the forward and retroflexed positions assisted with the treatment of internal hemorrhoids and allowed for an easier evaluation of range, form and red color signs which are closely related to hemorrhoid symptoms[21]. More importantly, retroflexion in the anal zone provides a better view which can help to ligate above the dentate line to avoid post-RBL pain[7]. In randomized trials performed by Cazemier et al[7], ERBL showed similar efficacy and safety compared with traditional RBL using anoscopy and the recurrence rate of bleeding symptoms using the two methods was also comparable[7]. However, the study reported that ERBL is significantly easier to perform and requires fewer treatment sessions[7].

In previous RBL using anoscopy, bleeding after RBL usually occurs 10-14 d after RBL when the rubber bands slough[23]. Coagulation disorders were demonstrated to increase the risk of bleeding related to RBL. Massive life-threatening post-RBL bleeding was rare but well documented (Table 1). In a prospective study enrolling 512 patients, Bat et al[23] reported 6 cases of massive post-RBL bleeding, of which 5 patients had a recent history of aminosalicylic acid (ASA) use[23]. Moreover, several case reports of life-threatening post-RBL bleeding had a history of ASA and clopidogrel[6,24,25]. Few cases of life-threatening post-ERBL bleeding have been reported and are also associated with coagulation disorders. Soetikno et al[26] reported 3 cases of severe bleeding after hemorrhoid ligation with a history of ASA/warfarin use. One of these patients accepted ERBL, resulting in an active bleeding vessel within the ulcer in the anal region[26]. Therefore, it is recommended that patients should stop anticoagulant/antiplatelet drugs in the perioperative period to prevent post-ERBL bleeding[6]. In contrast to previous reports, the patient in our case denied any use of anticoagulant/antiplatelet drug and the coagulation function examination was normal before ERBL. Furthermore, the patient underwent hospitalized observation and cautious postoperative care. She took a light diet and laxatives to soften the stool. However, all of those measures failed to prevent massive post-ERBL bleeding. No risk factors seemed to have been the clear cause of her massive bleeding.

In conclusion, ERBL is a safe and effective therapy for internal hemorrhoids with rare severe complications. However, our case reminds us that those patients who are also at risk of life-threatening bleeding and need strict follow-up after ligation, even if no coagulation disorder is present.

The authors thank the patient for her consent to share the whole diagnosis and treatment procedures.