Craniopharyngioma is a benign tumor that usually develops in children; however, it is located in the center and close to sensitive structures, such as the pituitary gland and hypothalamus. As the hypothalamus plays a crucial role in the homeostasis of anterior pituitary hormone synthesis, damage to the hypothalamus leads to multiple pituitary hormone deficiencies and non-alcoholic fatty liver disease, including hepatopulmonary syndrome (HPS). HPS has limited treatment and poor prognosis.

A girl aged 13 years and 6 mo underwent surgery for craniopharyngioma 6 years prior. Right craniotomy was performed with total resection via the corpus callosum approach, and the tumor at the base was approximately 3.5 cm × 3.5 cm × 4.0 cm. At 1 year postoperatively, she exhibited abdominal distension and weakness, and the laboratory tests revealed fatty liver disease. Thereafter, she had not visited the outpatient clinic for 2 years. Two years ago, she developed decreased activity endurance, severe cyanosis, chest tightness, wheezing, and intermittent and recurrent low fever after mild physical labor. Hepatobiliary ultrasonography, liver biopsy, and contrast echocardiography of the right heart showed cirrhosis and multiple pituitary hormone deficiencies, indicating HPS. After 1 year of treatment with recombinant human growth hormone, the liver function and oxygenation improved; she did not undergo liver transplantation.

Craniopharyngioma surgery can easily cause hypopituitarism, which can lead to nonalcoholic steatohepatitis and HPS in children. Early growth hormone therapy is important to improve the prognosis of these diseases.

Core Tip: Hepatopulmonary syndrome (HPS) is a serious complication of chronic liver disease with a poor prognosis. Currently, liver transplantation is the only available treatment; however, severe hypoxemia before transplantation is a high risk factor for postoperative death. We present a case of postoperative craniopharyngioma in a child with nonalcoholic steatohepatitis and HPS secondary to hypopituitarism. The patient’s liver function and hypoxemia were improved by growth hormone replacement therapy, and liver transplantation was expected to be avoided.

Nonalcoholic steatohepatitis and hepatopulmonary syndrome (HPS) are rare in children with secondary pituitary insufficiency after surgery for craniopharyngioma. Craniopharyngioma and treatment sequelae may lead to polypituitary insufficiency, which further affects the hormone secretion in the body. Endocrine diseases also cause nonalcoholic fatty liver disease (NAFLD)[1]. This report aims to further elucidate the clinical characteristics of nonalcoholic steatohepatitis (NASH) and HPS caused by hypothalamic-pituitary dysfunction after surgery for craniopharyngioma and the improvement of this disease after hormone replacement therapy, which has great significance in the clinical prognosis.

The chief complaints were liver enlargement for 4 years, activity loss for 2 years, and cyanosis for more than 1 year.

A female patient aged 13 years and 6 mo was diagnosed with craniopharyngioma 6 years prior and underwent surgical resection without postoperative hormone replacement therapy. She had weakness after the surgery, and multiple laboratory tests revealed hypernatremia and hyperchloremia. The maximum serum sodium level was 176 mmol/L, which was improved by infusion of glucose, and the lowest sodium level was reduced to approximately 155 mmol/L. Four years ago, abdominal distension due to liver enlargement was noted, and B-ultrasound examination suggested fatty liver disease. The patient had severe cyanosis, chest tightness, wheezing, intermittent fever, and progressive exacerbation after mild physical labor for more than 1 year. Oxygen saturation fluctuated around 85% under high-flow oxygen inhalation. Hepatobiliary ultrasonography, liver biopsy, and contrast echocardiography of the right heart revealed cirrhosis and HPS.

The patient had no history of hypertension, diabetes, or heart disease. She had undergone surgery for craniopharyngioma 6 years ago.

The patient was born to a G1P1 mother at full term. The patient’s parents are alive, healthy, and divorced. The patient does not have siblings.

Under atmospheric inhalation, oxygen saturation (SpO2) mostly fluctuated at around 70%. Cyanosis of the face and lips was noted. The heart rate was 124 beats/min, respiration was 26 breaths/min, blood pressure was 96/46 mmHg, height was 141.5 cm (-2.5 SD), and weight was 41.85 kg (-0.5 SD). The skin sclera did not have obvious yellow staining, and acanthosis nigricans was noted around the neck and axillae. No abnormality was found during cardiopulmonary auscultation, and the abdomen was soft but enlarged with palpable spleen and liver. Examination of the nervous system was negative, double breasts were in stage B1, pubic hair was in stage PH1, and no axillary hair was found. 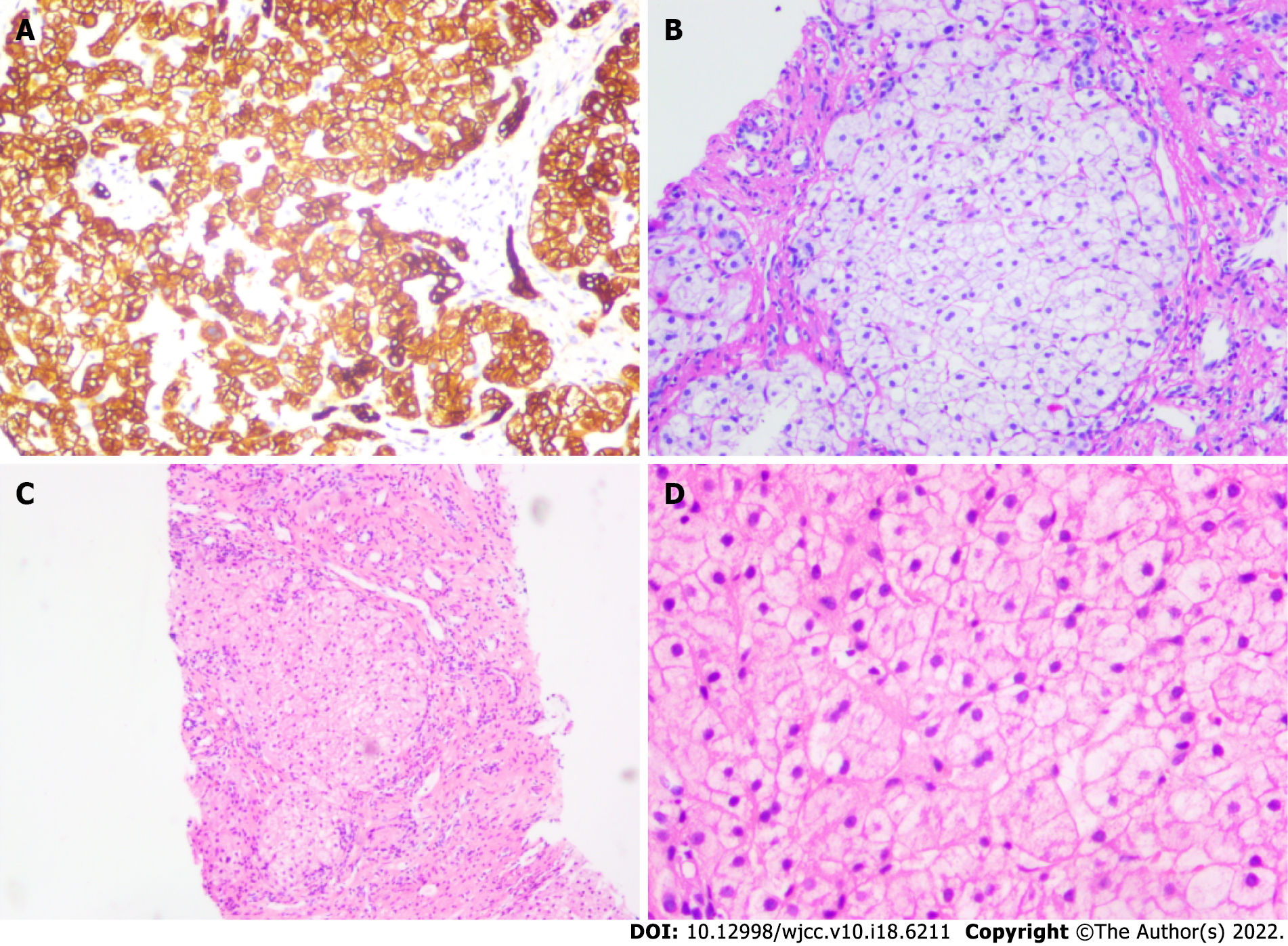 Oxygen saturation improved significantly after 1 mo of GH treatment and currently fluctuated at around 92% for low-flow nasal catheter oxygen. Liver function was reduced to the normal range, hypernatremia improved, and total bilirubin, indirect bilirubin, total bile acid, and lipid levels were significantly improved. During regular follow-up, it was found that liver transplantation was not required.

Craniopharyngioma is a rare primary brain tumor that originates from ectopic embryonic remnants of the craniopharyngeal duct or squamous epithelial cells. Its incidence is 0.5–2 cases per million persons per year, with peaks in childhood/adolescence (8 years) and adulthood (40–50 years)[2,3]. Although histologically defined as a benign tumor, craniopharyngioma often compresses nearby key structures, such as the optic neurohypophysis or hypothalamus[4,5]. Postoperative complications of craniopharyngioma, especially endocrine dysfunction, have a high incidence and mainly manifest as intractable diabetes insipidus hypothalamic-pituitary insufficiency, severe electrolyte disorder, and neuropsychological defects, which seriously affect the quality of life of children.

NAFLD is a chronic liver disease worldwide, and its incidence is increasing with the prevalence of obesity, diabetes, and metabolic syndrome. Statistically, the global incidence is 25%[6]. NAFLD is histologically classified into NAFLD and NASH, cirrhosis, and hepatocellular carcinoma. NAFLD and NASH are associated with hypothalamic hypopituitarism, but their pathogeneses remain unclear, and an increasing number of studies have found that the development of NASH is closely related to endocrine hormone abnormalities[7]. In children, it is caused by craniopharyngioma or pituitary adenoma and sequelae of treatment, leading to hypothyroidism, adrenal insufficiency, hypogonadotropism, and GH deficiency[8]. Adams et al[9] reported 21 cases of NAFLD, among which 15 were secondary after brain tumor surgery (approximately 71%), suggesting that brain tumor near the pituitary hypothalamus is an important cause of NAFLD. More than 50% (eight cases) of these tumors were craniopharyngiomas, suggesting the importance of careful diagnosis and exclusion of this type of tumor in the presence of clinically unexplained NAFLD[9]. Jung et al[10] reported the case of a 19-year-old girl diagnosed with craniopharyngioma who developed hypothalamic obesity, NAFLD, and progression to HPS after tumor resection[10]. Recently, studies on patients with hypothalamic-pituitary involvement after craniopharyngioma have found that the prevalence of NAFLD in children is approximately 3%–10%, while the incidence of NAFLD caused by hypothalamic-pituitary damage after craniopharyngioma has increased to approximately 50%[11,12]. Previously, it was generally believed that the risk factors for NAFLD were excessive fructose intake, insulin resistance, and metabolic syndrome, followed by oxidative stress injury and endoplasmic reticulum stress, adipocytokine, mitochondrial dysfunction, and bisphenol A intake[13,14].

In a retrospective study that reported the association between hypopituitarism, hypothalamic dysfunction, and NAFLD, NAFLD was found in 2.3% of patients with hypopituitarism and hypothalamic obesity[15]. Moreover, a recent analysis of long-term outcomes after childhood-onset craniopharyngioma found that 1 of 32 patients (3%) died of cirrhosis[16].

The risk of progression from childhood simple fatty liver to adult cirrhosis and liver failure is low, and the natural course of NAFLD in patients with hypothalamic and pituitary dysfunction may be more aggressive than that in the general population. Therefore, children with craniopharyngioma should be closely followed postoperatively, especially for liver function and pituitary hormone levels. Some scholars have reported NASH 4 years after pituitary tumor resection, accompanied by dyspnea and hypoxemia, which eventually developed into HPS[17]. HPS is a serious complication of chronic liver disease, which includes three main characteristics: Abnormal liver function, pulmonary telangiectasia (shunt), and hypoxemia[18]. It is a progressive disease that is a complication of cirrhosis or portal hypertension. The main clinical manifestations are dyspnea and cyanosis. At this point, the exact pathogenesis of HPS is still unclear, and is most likely thought to occur due to vasodilatation caused by nitric oxide[19], which increases pulmonary blood flow and cardiac output, leading to pulmonary ventilation-perfusion mismatch and arteriovenous shallows, ultimately making it difficult for oxygen molecules to bind with hemoglobin, and resulting in hypoxemia[20,21]. Currently, liver transplantation is the accepted treatment. Despite successful liver transplantation, NAFLD has a high recurrence rate. Therefore, the prospects for the treatment of NAFLD and HPS secondary to craniopharyngioma are not optimistic, and the need for liver transplantation should be carefully considered. We present the case of a 13-year-old girl with hypopituitarism following surgery for craniopharyngioma; particularly, GH deficiency resulted in slow-progressive NASH, which progressed to cirrhosis, and HPS was eventually diagnosed. After GH replacement therapy, liver biochemical indexes and hypoxemia were significantly improved. Therefore, it is speculated that GH may provide a new approach for the treatment of HPS in the future. An 11-year-old boy from Japan was reported to have developed hypopituitarism after surgical resection of a pituitary tumor and subsequently progressed to NASH and HPS. He underwent living-donor liver transplantation at 15 years of age and developed NAFLD again 1 year after transplantation; GH replacement therapy improved liver function, which stabilized to the normal range during 10 years of follow-up[17]. Kodama et al[22] and Torii et al[23] reported that GH replacement therapy improved NASH and HPS[22,23]. A 29-year-old man with pituitary stalk interruption syndrome progressed slowly to HPS, and after 14 mo of treatment with recombinant human GH, the liver function and hypoxemia improved, and liver fibrosis did not progress[24].

Recent studies have demonstrated an increased prevalence of NASH in adult patients with GH deficiency and improvement in liver function impairment after GH replacement therapy. Although it is unclear whether GH replacement therapy directly or indirectly reduces oxidative stress in the liver, GH has antioxidant stress effects in vivo. GH can directly reduce adipogenesis in liver cells and simultaneously regulate the production of IGF1, which can induce cell senescence and inactivate hepatic stellate cells, thus improving liver fibrosis[25].

Craniopharyngioma in children likely damages the pituitary gland and leads to hypopituitarism, regardless of its unique location or treatment with surgery or radiotherapy. Hypopituitarism in children is likely to develop into NASH, cirrhosis, and even HPS. In this study, GH replacement therapy significantly improved liver function, metabolic status, and hypoxemia, providing new clinical support for the early diagnosis and treatment of NASH and HPS in children with hypopituitarism.