We report a 17-year-old male patient who developed extensive myocardial calcifications while receiving prolonged ECMO support for severe myocarditis and cardiogenic shock. Extensive myocardial calcifications were confirmed by chest computed tomography (CT). Myocardial calcifications were observed in the left ventricle walls on CT examination 10 days after admission. The patient was then discharged with heart function class II on the NYHA classification. Two years later, the patient was still alive with adequate quality of life. We then included this patient and 7 other cases retrieved from the PubMed, Cochrane Library, EMBASE, and MEDLINE databases in our study, in order to provide a reference for the clinical diagnosis and treatment of this disease.

In recent years, extracorporeal membrane oxygenation (ECMO) technology has been increasingly used in the treatment of critically ill patients with severe myocarditis, cardiogenic shock, malignant arrhythmia, severe acute respiratory distress syndrome (ARDS), and other critical illnesses[1,2]. However, some rare complications have arisen due to ECMO support treatment. We here report a 17-year-old male patient with severe myocarditis who developed acute extensive myocardial calcifications while receiving ECMO support after successful treatment with intravenous arterial extracorporeal membrane oxygenation (VA-ECMO). This patient and 7 other patients retrieved from medical databases were reviewed. Patients’ clinical characteristics, epidemiology, comorbid conditions, diagnostic methods, clinical course and outcomes were collected and analyzed, in order to provide a reference for the clinical diagnosis and treatment of this disease.

A 17-year-old man was admitted to our department with fever and chest tightness for 2 d.

Two days previously, the patient developed fever, chest tightness, and tachypnea. Without treatment, there was gradual aggravation of his symptoms.

The patient had no history of cardiac, renal, or other disorders.

The patient had no relevant personal and family history.

On admission, his temperature was 38.5°C, pulse rate was 139 bpm, respiratory rate was 33 breaths/min, and blood pressure was 89/56 mmHg. Heart sounds were scarcely audible.

Chest computed tomography (CT) examination at admission showed no morphological abnormalities in the heart (Figure 1A).

On the day after admission, the patient had a cardiac arrest due to acute left ventricular failure and malignant arrhythmia. He developed acute renal failure following cardiogenic shock. Emergency VA-ECMO was carried out and bedside continuous renal replacement therapy was performed to optimize fluid management. In addition, comprehensive treatment such as antiviral, myocardial nutrition, arrhythmia prevention and nutritional support were administered. The patient subsequently developed severe hypocalcemia due to cardiogenic shock, rhabdomyolysis, acute renal failure, and received approximately 1300 mg/d of calcium gluconate for the first 5 d. The patient did not receive warfarin or any other vitamin K analogue during hospitalization. There was no evidence of severe sepsis before myocardial calcification was found. An increase in the left ventricular wall density was observed on chest CT 10 d after admission (Figure 1B). Thirty days later, obvious myocardial calcifications were observed on CT images of the left ventricle, and the heart valve and right ventricle were not involved (Figure 1C). Follow-up delayed gadolinium enhanced magnetic resonance imaging (MRI) examination performed 50 d after admission showed high signal intensity in the left ventricular wall without evidence of persistent inflammation, suggesting myocardial fibrosis/scarring resulting from myocardial injury/necrosis (Figure 2A and B). Echocardiography (2 mo after hospital admission) showed a LVEF of 56%, and mild diastolic dysfunction. Echocardiography did not detect myocardial calcifications (Figure 2C). 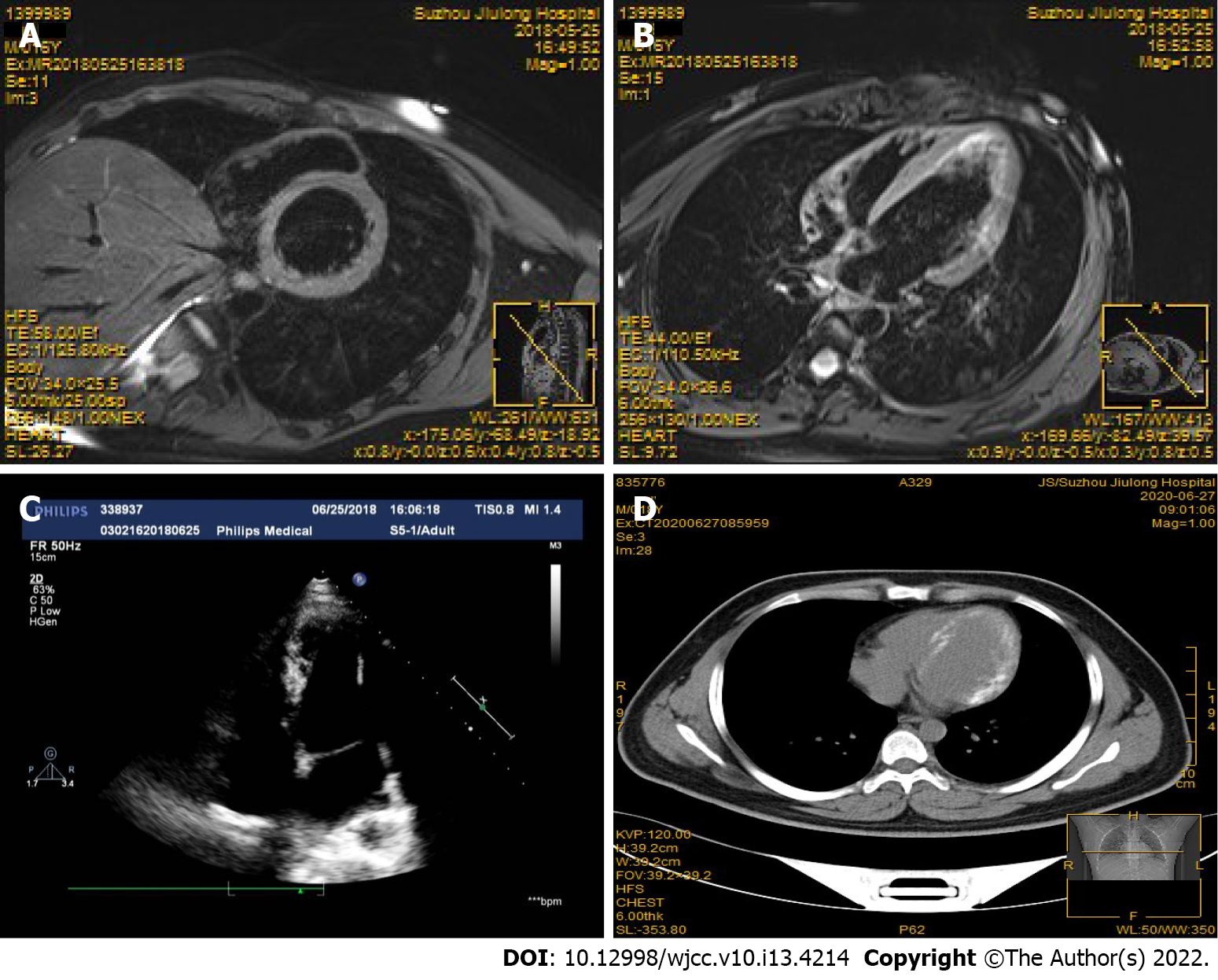 Published medical literature on cardiac calcifications and ECMO were systematically retrieved from PubMed, Cochrane Library, EMBASE, and MEDLINE medical databases up to October 2020. We searched the databases using the following terms (MeSH), including "Calcification" AND "Noncalcification", and used the Boolean operators "AND", “OR”, and the free word "ECMO" in combination. Following elimination of duplicates and redundant articles, a total of 4 articles related to the case report, with 7 cases of ECMO-associated myocardial calcifications, were included for the final review and analysis[3-6]. The data on these 7 cases and the present case were collected and analyzed. The medical history, clinical features, comorbidities, diagnostic methods and outcomes of these patients are shown in supplemental digital content (Table 1).

Among the 8 patients in this review, there were 4 males and 4 females, aged from 1 wk to 66 yr. All of the patients were from intensive care units, and the main etiology was sepsis-induced ARDS or severe myocarditis. Six patients (75%) received venoarterial ECMO (VA-ECMO), and two patients (25%) received venovenous ECMO (VV-ECMO). Cardiac calcifications were detected 10 to 32 d after ECMO support. Six patients (75%) required renal replacement and exogenous calcium supplementation in the acute phase of the disease. Four of the eight patients died shortly after the acute phase while in hospital. In a long-term follow-up of the reported cases, one patient was discharged with ventilator support of an extended acute-care facility. Of the two patients followed up for more than 18 mo, one presented with persistent moderate diastolic dysfunction, the other with unrelenting mild diastolic dysfunction, but left ventricular systolic function was normal in both patients.

Complications of extensive cardiac calcifications following ECMO support therapy are rare, and the mechanism may be multifactorial. The decisive contributing factor may be that ECMO treatment prolonged the survival of patients. These patients all received ECMO (especially VA-ECMO) support, did not have myocardial infarction, and were suffering from hemodynamic instability, severe metabolic acidosis, acute renal failure, and required high doses of vasoactive drugs and exogenous calcium supplementation. Possible pathological mechanisms were as follows: First, sepsis or viral infection led to severe myocardial damage, making it easier for calcium to deposit in myocardial ischemia and necrotic areas[7]. Second, rhabdomyolysis combined with acute renal failure might result in severe calcium metabolic abnormalities[8]. Third, intravenous supplementation of a large amount of exogenous calcium possibly further aggravated calcium deposition in necrotic areas of the myocardium[9]. However, the direct role of ECMO support in myocardial calcifications remains to be confirmed.

This review showed that myocardial calcifications were mostly detected on chest CT occasionally after days to weeks of ECMO support, and most patients received no specific treatment for cardiac calcifications from the acute phase to the convalescence phase. It was speculated that the persistent myocardial calcifications might reduce elasticity of the myocardium, eventually giving rise to ventricular filling inability or diastolic dysfunction. In this study, restrictive cardiomyopathy was present in three patients who survived. However, there is little data on the long-term effects of these calcifications because few cases have been reported. The development of in vitro life support technologies such as ECMO and the widespread use of renal replacement therapy are accompanied by an increasing incidence rate of acute myocardial calcifications as a complication. Therefore, for a small number of patients who have passed the acute phase of rehabilitation, it is necessary to monitor the symptoms of cardiomyopathy secondary to cardiac calcifications, and develop specific treatment and follow-up guidelines.

Clinicians should be aware that this rare but rapidly progressing complication may directly affect the clinical outcome of patients receiving ECMO support. Further research is warranted to clarify the exact pathophysiological mechanism of acute myocardial calcifications and their clinical significance in critically ill patients receiving ECMO support.