Research Domain of This Article
Physiology

Renal proximal tubules (PTs) play important roles in the regulation of acid/base, plasma volume and blood pressure. Recent studies suggest that there are substantial species differences in the regulation of PT transport. For example, thiazolidinediones (TZDs) are widely used for the treatment of type 2 diabetes mellitus, but the use of TZDs is associated with fluid overload. In addition to the transcriptional enhancement of sodium transport in distal nephrons, TZDs rapidly stimulate PT sodium transport via a non-genomic mechanism depending on peroxisome proliferator activated receptor γ/Src/epidermal growth factor receptor (EGFR)/MEK/ERK. In mouse PTs, however, TZDs fail to stimulate PT transport probably due to constitutive activation of Src/EGFR/ERK pathway. This unique activation of Src/ERK may also affect the effect of high concentrations of insulin on mouse PT transport. On the other hand, the effect of angiotensin II (Ang II) on PT transport is known to be biphasic in rabbits, rats, and mice. However, Ang II induces a concentration-dependent, monophasic transport stimulation in human PTs. The contrasting responses to nitric oxide/guanosine 3’,5’-cyclic monophosphate pathway may largely explain these different effects of Ang II on PT transport. In this review, we focus on the recent findings on the species differences in the regulation of PT transport, which may help understand the species-specific mechanisms underlying edema formation and/or hypertension occurrence.

Core tip: Renal proximal tubule (PT) transport is essential for the regulation of plasma volume and blood pressure. Several species differences are found as to the stimulatory effects of thiazolidinediones, insulin, and angiotensin II on PT sodium transport. This review focuses on this topic, which may be relevant to species-specific mechanisms underlying edema formation and/or hypertension occurrence.

The kidney plays an essential role in the homeostatic regulation of electrolytes, acid-base and plasma volume in the body. Some species differences are known to exist in the distribution patterns of solute transporters as well as the hormonal actions in distal nephron[1,2]. In proximal tubules (PTs), on the other hand, there are no major species differences in the distribution patterns and functions of main sodium transporters such as the apical Na+/H+ exchanger type 3 NHE3 and the basolateral electrogenic Na+-HCO3- cotransporter NBCe1[3,4]. While the transport stoichiometry of NBCe1 was reported to be 1Na+ to 3HCO3- in rat PTs in vivo[5], it was found to be 1Na+ to 2HCO3- in rabbit PTs in vitro[6]. However, this difference was turned out to be due to the differences in experimental conditions[7,8].

Nevertheless, recent studies identified substantial species differences in the regulation of PT transport, which might be important for uncovering the species-specific causes for edema and/or hypertension. Species differences in renal physiologic and/or metabolic responses may be also potentially important for understanding mechanisms for the different effects of several agents against diabetic nephropathy between animal models and human patients. For example, inhibition of advanced glycosylation end products by aminoguanidine or pyridoxamine was reported to be protective in rodent models of diabetic nephropathy[9-12]. However, these agents were not found effective in initial human trials in diabetic patients[13,14]. Effectiveness of a selective PKC-inhibitor Ruboxistaurin found in rodent models of diabetic nephropathy[15,16] was also not confirmed in human type 2 diabetic patients[17]. Indeed, rodent models of diabetic nephropathy exhibit proteinuria and pathological glomerular changes, but do not exhibit progressive renal failure[18]. Dogs, pigs and other non-human primates have been used for toxicology testing. However, ideal animal models have not been established for revealing drug side effects[19]. We focus on species differences in the regulation of PT transport in this review.

Thiazolidinediones (TZDs) activate a nuclear receptor peroxisome proliferator activated receptor γ (PPARγ), thereby improving insulin resistance through the transcriptional modulation of the relevant genes[20]. TZDs have been widely used for the treatment of type 2 diabetes. However, fluid retention is a serious clinical problem, which may exert an adverse effect on the cardiovascular system[21].

We found that TZDs rapidly induced transport stimulation within minutes in isolated PTs from rabbits, rats, and humans. Our subsequent analysis revealed that TZDs-induced PT transport stimulation was dependent on the non-genomic signaling cascade consisting of PPARγ/Src/epidermal growth factor receptor (EGFR)/MEK/ERK[28]. Notably, however, TZDs failed to induce transport stimulation in isolated mouse PTs, despite the definite expression of PPARγ in these tubules. We speculated that some factor(s) specific for mouse PTs might interfere with TZDs-induced rapid signaling. Consistent with this view, Kiley et al[29] reported the constitutive activation of Src/EGFR pathway that was found only in mouse PTs. This unique constitutive activation of Src/EGFR, which could potentially explain the different effects of exogenous EGF on unilateral ureteral obstruction in rats and mice[30], was confined to mouse PTs and not found in other mouse tissues[29]. Because TZDs rapidly activated the Src/ERK pathway in kidney cortex of rabbits and rats but not mice, we concluded that the constitutive activation of Src/EGFR prevented TZDs-induced transport stimulation in mouse PTs[28]. Consistent with this conclusion, the constitutive activation of Src was also reported to interfere with the non-genomic signaling of another nuclear receptor for estrogen[31].

Most likely, TZDs-induced volume expansion is multifactorial, depending on both genomic and non-genomic actions of PPARγ on tubular sodium transport. One of potential targets of non-genomic actions of PPARγ may be distal nephron, where WNK kinases regulate the balance between renal NaCl absorption and K+ secretion[32,33]. WNK4 is also known to affect Cl- transport in extrarenal epithelia[34]. It remains to be determined whether PPARγ regulates the WNK kinase system.

Insulin is thought to enhance renal sodium retention by activating sodium transport in several nephron segments[35]. In PTs, insulin stimulates the major sodium transporters NHE3, NBCe1, and the Na+/K+-ATPase[36-38]. In isolated rabbit PTs, Baum found that insulin, at the concentrations between 10-10 mol/L and 10-8 mol/L, dose-dependently stimulates volume and bicarbonate absorption[39]. Recently, we also found the similar dose-dependent stimulation of NBCe1 by up to 10-8 mol/L insulin in isolated PTs from rats and humans[40]. This stimulatory effect of insulin on PT sodium transport, which is completely preserved in insulin resistant rats and humans, may play an important role in the pathogenesis of hypertension associated with insulin resistance[40].

Insulin actions are initiated by the activation of tyrosine kinase in the cell membrane receptor, which induces a series of phosphorylation in multiple insulin receptor substrates (IRSs). The two major IRS proteins, IRS1 and IRS2 often mediate distinct insulin actions, and defects at the levels of IRS1 or IRS2 may be responsible for the occurrence of selective insulin resistance in several tissues[41]. We have shown that IRS2 but not IRS1 mediates the stimulatory effect of insulin on PT transport in both mice and rats. Moreover, we have confirmed that insulin activates Akt in kidney cortex of both mice and rats[40,42]. We found that up to 10-9 mol/L insulin stimulated mouse PT sodium transport. Unlike in rats and humans, however, the higher concentrations of insulin (i.e., more than 10-8 mol/L) failed to stimulate PT transport in mice[42]. In isolated mouse collecting ducts, by contrast, insulin at the high concentrations up to 10-7 mol/L was reported to activate ENaC[43]. Importantly, insulin is known to activate both Akt and ERK pathways, and these two pathways are interconnected with each other[44,45]. It is therefore possible that the constitutive activation of Src/ERK may somehow interfere with the effects of high concentrations of insulin in mouse PTs.

The stimulation of PT sodium transport by Angiotensin II (Ang II) may be essential for Ang II-induced hypertension[46,47]. Actually, however, Ang II is known to regulate PT transport in a biphasic way: transport is stimulated by low (picomolar to nanomolar) concentrations of Ang II, but inhibited by high (nanomolar to micromolar) concentrations of Ang II. This biphasic regulation of PT transport by Ang II has been confirmed in rats, mice, and rabbits[48-51]. Regarding the receptor subtype(s) responsible for the biphasic effects of Ang II, controversial results had been reported[52-54]. However, the analyses on isolated PTs from type 1A Ang II receptor (AT1A) deficient mice have clearly shown that AT1A mediates both the stimulatory and inhibitory effects of Ang II[49,51].

Surprisingly, we found that the inhibitory effect of Ang II is lost in human PTs. Actually, up to 10-5 mol/L Ang II dose-dependently stimulated human PT transport. In view of high intrarenal concentrations of Ang II, these data suggest that Ang II may play an even more important role in the regulation of plasma volume and blood pressure in humans than in other species[58].

Currently, the reason why the NO/cGMP pathway exerts different effects on PT transport in humans and other species remains unknown. Nevertheless, several previous reports supported the existence of such species differences. For example, renal NO production was enhanced by salt loading in rodents, which might facilitate sodium diuresis and prevent blood pressure elevation[59,60]. Thus, renal NO is thought to induce a natriuretic response to salt loading in rodents[61]. However, renal NO production was not significantly enhanced by salt loading in humans[62,63], and an adaptive role of renal NO to salt loading is less clear in humans[64,65]. In any case, the stimulatory effect of NO/cGMP pathway on PT transport may represent a human-specific target for hypertension.

The NO/cGMP pathway is thought to be inhibitory on sodium transport in thick ascending limb and collecting ducts[61]. Therefore, it will be interesting to examine whether the similar species differences may also exist in the effects of NO/cGMP pathway on these nephron segments. Such knowledge may help understand the mechanism of fluid overload by selective endothelin receptor antagonism[66].

In summary, non-genomic stimulation of PT transport by TZDs is uniquely absent in mice probably because of the constitutive activation of Src/EGFR as shown in Figure 1. As shown in Figure 2, on the other hand, the inhibitory effect of Ang II is lost in human PTs, where the NO/cGMP pathway is stimulatory unlike in other species. These species differences may be at least partially responsible for the species-specific mechanisms underlying edema formation and/or hypertension occurrence. 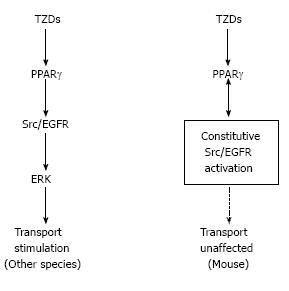