Homeostasis of the vital organs in the body depends on the balance between nutrient supply through vascular perfusion and the integrity of structure and function of the organs. In this regard, kidney integrity depends mainly on the renal vascular supply. Philosophically, normal homeostasis of the kidney follows the so-called Natural Wisdom “The Middle Tract is the Balance of Nature”, which implies that the normal integrity of the kidney depends on normal vascular perfusion. Any deviation of blood perfusion, either too much or too little would be harmful to the kidney[1]. Such wisdom can be illustrated by the correlation between blood perfusion and its organ’s structure and function. Under normal circumstances, the intact tubulointerstitium has been shown to be surrounded by an adequate supply of peritubular capillary plexus. In contrast, under pathological conditions, such as in chronic kidney disease (CKD), the normal tubulointerstitial structure is replaced by tubulointerstitial fibrosis, along with the disappearance of peritubular capillary plexus which is replaced by renal microvascular disease[2,3]. The spatial relationship between renal perfusion and kidney integrity will be the context of the following issues: (1) Renal microvascular disease and tubulointerstitial fibrosis; (2) Why does the present therapeutic strategy fail to restore renal function in CKD (a) CKD is recognized and treated at a rather late stage; and (b) Altered vascular homeostasis in late CKD; and (3) An innovative therapeutic strategy to implement the treatment at early stage CKD.

Accumulating evidence supports the suggestion that there are toxins such as free radicals, cytokines and metabolic products circulating through the renal microcirculation in a variety of CKDs. Abnormally elevated oxidant and antioxidant deficiencies have been repeatedly documented in both mild as well as severe forms of CKD[4-11]. 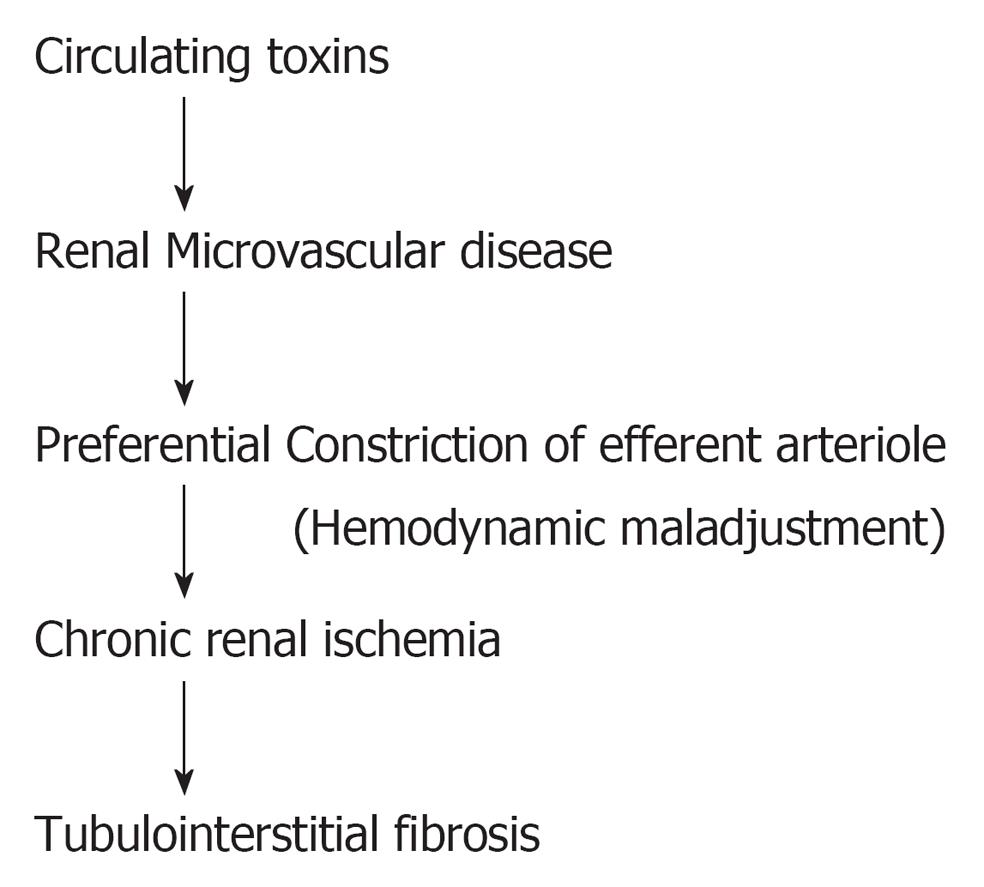 Figure 1 Hemodynamic maladjustment induces chronic renal ischemia and tubulointerstitial fibrosis.
WHY DOES THE PRESENT THERAPEUTIC STRATEGY FAIL TO RESTORE RENAL FUNCTION IN CKD
CKD is recognized and treated at a rather late stage

Under the current definition of CKD, which includes only patients associated with creatinine clearance under 60 mL/min per 1.73 m2, or serum creatinine greater than 1 mg/dL, recognition of CKD is practically limited to late CKD (stages 3-5) since serum creatinine does not change until the creatinine clearance drops to the 50% level[25-27]. This implies that treatment of CKD is usually initiated at a rather late stage. Early stage CKD patients have generally been left untreated, and the disease allowed to progress without any appropriate therapeutic intervention. Treatment of these CKD patients with vasodilators shows therapeutic unresponsiveness and fails to correct the chronic ischemic state[28-33]. This issue leads us to propose that vascular homeostasis explains such therapeutic failure.

It has been recently demonstrated that altered vascular homeostasis and impaired nitric oxide (NO) production are responsible for therapeutic resistance to vasodilators in late CKD. 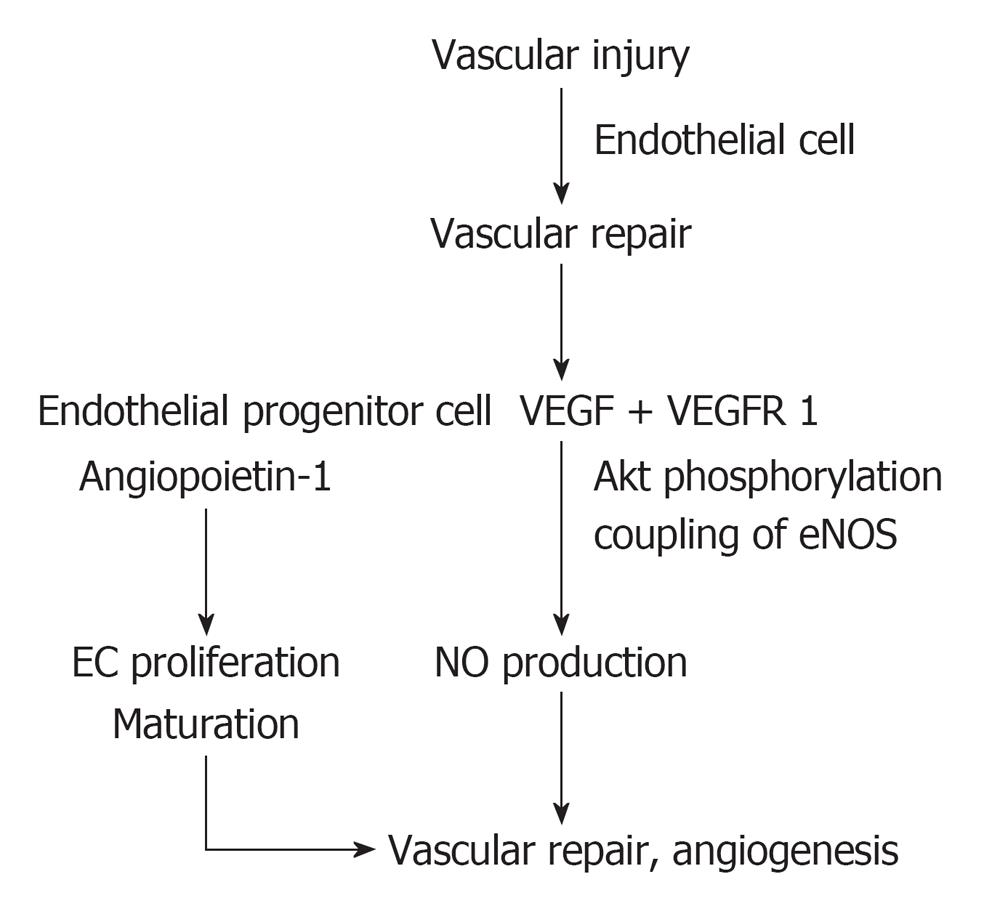 In late stage CKD, we as well as others[40-44] have recently demonstrated that there is an altered vascular homeostasis characterized by defective angiogenic factors namely VEGF, VEGFR 1, endothelial progenitor cells and angiopoietin 1, in conjunction with abnormally elevated antiangiogenic factors namely: VEGFR 2 and angiopoietin 2. Such altered vascular homeostasis observed in late stage CKD canbe summarized as follows.

With respect to defective angiogenic factors, as indicated on the left hand side of Figure 3, the defective VEGF and VEGFR 1 would impair the Akt phosphorylation, uncouple eNOS, and impair NO production. An impaired NO production in conjunction with defective endothelial progenitor cells and defective angiopoietin 1 would impair the physiological stimulation of endothelial cell proliferation and maturation. They would integrate together in an insufficient vasculogenesis and vascular repair. With respect to the abnormally elevated antiangiogenic factors, VEGF activates through VEGFR 2 inducing abnormal Akt phosphorylation through an NO-independent pathway, resulting in a proliferation of abnormally immature endothelial cells. The presence of defective angiopoietin 1, is responsible for the immature endothelial cell proliferation. In addition, in the presence of abnormally elevated angiopoietin 2, endothelial cells would be further destabilized and endothelial apoptosis induced. Collectively, they would integrate in the formation of abnormally immature endothelial cells, which would be consistent with endothelial myofibroblast transition cell indicated by Li[45]. With respect to the vascular smooth muscle cell (VSMC) proliferation, this is triggered by the upregulation of angiotensin II secondary to endothelial cell dysfunction, activating NADPH oxidase, oxidative stress, NFKB and p 38, JAK STAT and eventually stimulating VSMC proliferation[46]. The VSMC proliferation would induce a thickening of the vascular wall, a narrowing of vascular lumen, and eventually a reduction in vascular perfusion, which eventually leading to the development of neoangiogenesis and progressive vascular disease. The altered vascular homeostasis observed in late stage CKD indicates both an insufficient vasculogenesis associated with an impaired NO production, which explains the therapeutic resistance to vasodilators, as well as the clinical progression of renal microvascular disease of increasing severity. Also, the progression of renal microvascular disease correlates with the altered renal hemodynamics characterized by a progressive reduction in peritubular capillary flow along with a progressive decline in renal function[1]. Such therapeutic failure of current practice with vasodilators in late stage CKD requires an alternative strategy to focus the treatment at the new target group of CKD patients at the early stage of renal function impairment (Figure 3). 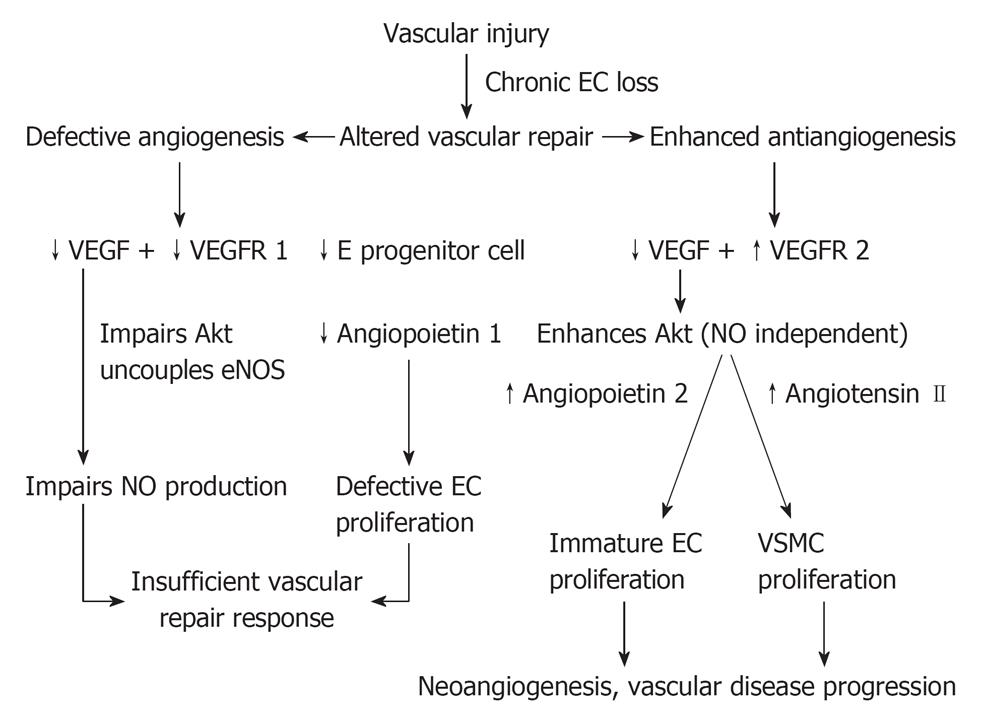 The alternative therapeutic strategy would focus on early stage CKD patients, who mostly have been untreated or received inappropriate treatment. Our recent study on vascular homeostasis in early stage CKD supports this concept[47,48]. In type 2 diabetic nephropathy, the vascular homeostasis observed in the normoalbuminuric stage indicated that both angiogenic factors namely: VEGF, angiopoietin 1 and VEGF receptor 1; as well as antiangiogenic factors namely: angiopoietin 2 and VEGF receptor 2, were within normal limits. In non-diabetic early stage CKD patients, the vascular homeostasis indicated that angiopoietin 1 was the only angiogenic factor showing a mild decrease, and that angiopoietin 2 was the only antiangiogenic factor showing a mild elevation. Thus these findings render support the theory that vascular homeostasis would likely be adequately functional in early stage CKD. With the adequate vasculogenesis observed in early stage CKD, vasodilator treatment would relax the efferent arteriole by enhancing the peritubular capillary flow. Increased peritubular capillary flow would inhibit the process of tubulointerstitial fibrosis indicated by the decline in Fe-Mg value following vasodilator treatment - an index indicating renal regeneration. Vasodilator treatment would also relax the afferent arteriole and thereby increase the glomerular filtration rate - an index indicating renal function improvement. In fact, therapeutic implementation with appropriate vasodilators at this early stage in CKD has indeed been able to enhance peritubular capillary flow, as well restore renal function[49,50].

In conclusion, therapeutic implementation of vasodilator treatment in early stage CKD, in an environment favorable to renal angiogenesis and regeneration, can effectively prevent end-stage renal disease.