Research Domain of This Article
Virology

The occurrence of lipodystrophy in patients taking anti-human immunodeficiency virus (HIV) medications is a serious problem as it is irreversible even after drug withdrawal. Although it was first recognized in patients taking proteinase inhibitors, other types of anti-HIV agents can also cause lipodystrophy. In a recent publication by Jones et al entitled “Highly active antiretroviral therapy dysregulates proliferation and differentiation of human pre-adipocytes” in World Journal of Virology, it was reported that simultaneous treatment of human subcutaneous adipocytes with anti-HIV drugs with different mechanisms of action synergistically exerted anti-adipogenesis effects in vitro, warning us to take utmost care in every case receiving combination antiretroviral therapy (cART). For elucidation of the molecular basis for cART-related lipodystrophy, multi-faceted approaches should be taken, based on a deeper understanding of the development and organization of adipose tissues.

Core tip: Development of lipodystrophy in patients receiving combination antiretroviral therapy (cART) has been a serious problem. Although it was first reported in patients taking proteinase inhibitors, other types of anti-human immunodeficiency virus (HIV) agents also cause lipodystrophy. A recent publication in World Journal of Virology reported unexpected synergism among anti-HIV drugs with different mechanisms of action in inhibiting adipogenesis in vitro. To elucidate the molecular basis for cART-related lipodystrophy, multi-faceted approaches should be taken with a deeper understanding of the development and organization of adipose tissues.

The development of combination antiretroviral therapy (cART), where more than two types of anti-human immunodeficiency virus (HIV) agents with different mechanisms of action are used, has greatly improved the prognosis of acquired immune deficiency syndrome (AIDS) by reducing mortality rates and suppressing opportunistic infections. With the extension of the administration period, however, it has becoming increasingly important to take effective measures to control the side effects of cART. The major adverse conditions caused by anti-HIV agents are lipodystrophy, atherosclerosis, eruption, osteoporosis and lactic acidosis. Since the pathophysiology of cART-related lipodystrophy is an irreversible process, elucidation of the mechanism how anti-HIV agents induce lipodystrophy is a matter of particular importance. In the current commentary, possible mechanisms of cART-related lipodystrophy are discussed by referring a recent paper by Jones et al[1] in World Journal of Virology, which reported an unexpected synergy among anti-HIV drugs with different mechanisms of action in inhibiting proliferation and differentiation of human preadipocytes in vitro (Figure 1). 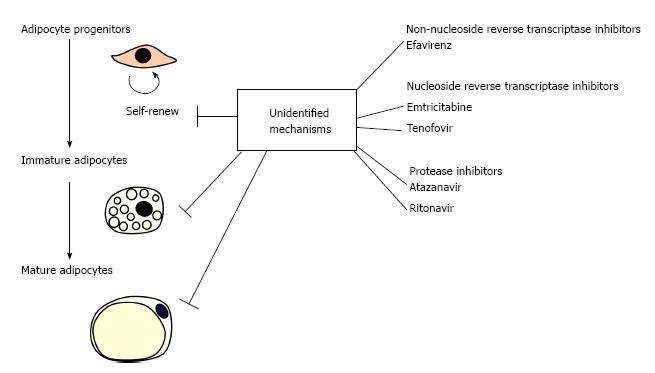 Adipose tissues consist of parenchymal cells (i.e., adipocytes and their progenitors) and non-parenchymal cells (i.e., non-adipocyte lineage cells) (Figure 2) and disorders of any of these components may result in the development of lipodystrophy. Caso et al[2] previously reported that two proteinase inhibitors, ritonavir (RTV) and atazanavir (ATV), inhibited the proliferation and differentiation of human subcutaneous preadipocytes in vitro. In a recent paper, the same group showed that protease inhibitors (RTV, ATV), nucleoside/nucleotide reverse transcriptase inhibitors [emtricitabine (FTC), tenofovir (TDF)] and a non-nucleoside reverse transcriptase inhibitor [efavirenz (EFV)] synergistically inhibited proliferation and differentiation/maturation of human preadipocytes obtained from subcutaneous fat depots[1]. It is surprising that synergism exists among drugs with completely different action mechanisms. Although the molecular basis of this synergism remains unknown, the finding has sounded the alarm about the risk of unexpected occurrence of lipodystrophy in cART-receiving patients. 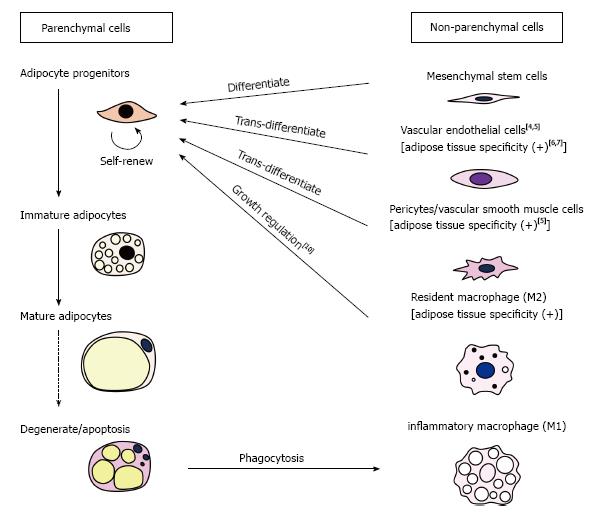 In addition to affecting parenchymal cells, anti-HIV agents may impair the functions of non-parenchymal cells, which consist of mesenchymal stem cells (MSCs), vascular endothelial cells (VEC), pericytes/vascular smooth muscle cells, resident macrophages (M2) and inflammatory macrophages (M1) (Figure 2). Among these, VECs may be of most interest for the following three reasons: First, anti-HIV agents reportedly induce oxidative damage to VECs[3], which is considered to be one of the causes of development of cART-related atherosclerosis. Atherosclerosis in adipose tissue vasculatures within specific regions of subcutaneous fat depots may cause local ischemia, resulting in degeneration/loss of adipose tissues in specific areas such as the face and limbs. However, the reason why the face and limbs are commonly affected by cART-related lipodystrophy remains unknown. Secondly, VECs in adipose tissues (A-VEC) is known as one of the ancestors of adipocytes[4,5]. Recurrent damage to A-VECs by anti-HIV agents may reduce the population size of adipocyte precursors, which might, in turn, result in the occurrence of lipodystrophy after a time. Lastly, it is accepted that A-VECs have distinctive characteristics compared with VECs of other tissues; for example, VECs of white adipose tissues exhibit specific antigenicity[6]. Moreover, it was recently reported that poly(2-methacryloyloxyethyl phosphorylcholine-co-n-butyl methacrylate (PMB)-coated carbon nanotubes specifically accumulated in the capillary endothelial cells of adipose tissues[7]. Even under conditions where anti-HIV drugs do not cause oxidative damage to A-VEC, they might possibly affect specific functions of A-VEC, thus promoting the development of lipodystrophy.

Other non-parenchymal cells could also be the targets of cART. The MSCs can be precursors of preadipocytes, and pericytes/vascular smooth muscle cells are recognized as an equivalent of MSCs[8], although a recent paper by Guimarães-Camboa et al[9] has challenged this idea. Similarly to A-VECs, pericytes/vascular smooth muscle cells in adipose tissues are considered as one of the ancestors of adipocytes[5]. It is known that white adipose tissues are particularly rich in M2 macrophages, which provide a niche for preadipocytes[10]. On the other hand, M1 inflammatory macrophages are recruited into adipose tissues from the bone marrow when adipocytes undergo degeneration. Defects in the clearance of degenerative adipocytes may create pathological states of adipose tissues, which possibly lead to the development of lipodystrophy.

Although the critical target cells remain undetermined, the etiology of cART-related lipodystrophy should be investigated from multiple perspectives.

The incidence of lipodystrophy was first recognized in patients receiving protease inhibitors[11,12] and more than half of affected patients reportedly take these drugs[13]. In addition to suppressing growth and differentiation of preadipocytes[1], protease inhibitors reportedly exert multifactorial effects on adipocytes including impairment of mitochondrial functions[14], changes in the gene expression related to ER-stress and lipid droplet formation[14] and even an induction of mitophagy[15]. cART-related dystrophy is not restricted to protease inhibitor-receiving cases[16]. Patients with cART-related dystrophy are relatively healthy[13], although hypertriglyceridemia and insulin resistance may be present[11-13,16-19]. Nevertheless, cART-related dystrophy is a crucial issue to be addressed, since loss of fat depots frequently occurs in the face and limbs and fat wasting of the face considerably reduces quality of life. The reason why adipose tissues in the distal parts of the body are commonly affected by cART-related dystrophy remains elusive. In some cases, subcutaneous fat depots are reciprocally accumulated in the central parts of body including the abdomen, trunk and neck. Since plasma cortisol values are reportedly within the normal range, central fat accumulation cannot be attributed to hypercortisolism[16]. Interestingly, adipose tissue-specific Dicer knockout (ADicerKO) mice reportedly exhibit a phenotype that bears a close resemblance to cART-related lipodystrophy[20]. They even show buffalo hump-like phenotypes, in which brown adipose tissues (BAT) are substantially enlarged and degenerated into white adipose tissue accumulations[20]. Since BATs are mainly located in the neck and upper back areas in mice and humans, central fat accumulation in cART-related lipodystrophy might possibly be associated with abnormal lipid accumulation in BATs.

In summary, the etiology of cART-related lipodystrophy remains largely unknown and further investigations will be required to elucidate its developmental mechanisms.