Since early description of CD4/CD8 T cell duality, continuous discovery of functional T lymphocyte subsets and their related cytokines constitutes major progress in our understanding of the immune response. T-lymphocyte derived lymphokines and environmental cytokines are essential for both innate and antigen-specific immune responses to a wide variety of agents. Following immune battle and aggression overcome, cytokines may return against neighbored cells/organs, causing pathogenic hypersensitivity reactions, including autoimmune diseases. Due to their cytokine production, CD4+ T helper lymphocyte subsets may be considered as one the major players of the immune response. Among CD4+ T cell subsets, the identification of interleukin-17-producing cells (Th17) led to better understanding of coordinated cytokine involvement during inflammatory reactions together with the subsequent clarification of complex interactions between these mediators. In this review, we discuss Th17 cell differentiation, functions, and the role of this cell subset during rheumatoid arthritis pathogenesis together with therapeutic strategies to control these cells.

Over 20 years ago, first description of CD4+ T helper (Th) cell diversity (Th1/Th2) pointed to distinct cytokine production capacity of these cells[1]. As in B-cell differentiation, this diversity is dependent upon cytokines and antigens that trigger CD4+ precursor cells through maturation into cells producing type 1 [interferon (IFN)-γ and interleukin (IL)-2] or type 2 (IL-4, IL-5, IL-13) lymphokines[1,2]. Two other subpopulations were subsequently identified: regulatory T cells (Treg) producing IL-10 and transforming growth factor (TGF)-β[3] and IL-17-producing CD4+ T cells (Th17)[4-6]. These two subsets play a key role during tolerance and inflammatory responses[2,7]. Recent investigations added to our knowledge through precise definition of Th17 cells subpopulations and identification of additional effector subsets, such as Th22, Th9, and follicular helper (Tfh) cells[8-10]. The role of Th17 cells during development of autoimmune diseases has largely been described over the past few years[7,11]. The involvement of Th17/IL-17 pathway during the pathogenesis of rheumatoid arthritis (RA)[12,13] led us to summarize, in this review, signals leading to the differentiation of Th17 cells, their cytokine secretion profile, in vivo correlation with other cytokines and possible targeting of IL-17 pathway as therapeutic approach in RA or other related diseases.

Following antigen recognition on antigen presenting cells, naive Th0 lymphocytes go towards maturation into more specialized subsets depending upon various in situ factors including antigen itself, cellular and cytokinin environment (Figure 1). Differentiation into Th1 cells requires IL-12 induction of signal transducer and activator of transcription (STAT1/4) and subsequent induction of the transcription factor T-bet, with in situ IFN-γ as helper factor. These cells are essential for cell-mediated immune response to intracellular pathogens, cellular immunity and clonal lymphocyte multiplication through their ability to produce IL-2[1,2]. Maturation into Th2 cells seems to be dependent upon weaker T cell receptor signaling and IL-4-dependent or independent GATA-3 transcription factor induction. These Th2 lymphocytes help the development of humoral immunity together with limiting Th1 response[2]. Antibody response is also potentiated by Tfh lymphocytes, characterized by the expression of BCL6 transcription repressor and depends upon the in situ presence of IL-6 and IL-21[14] (Figure 1). Meanwhile, whether Tfh cells directly derive from Th0 cells or from other subsets is still unclear. 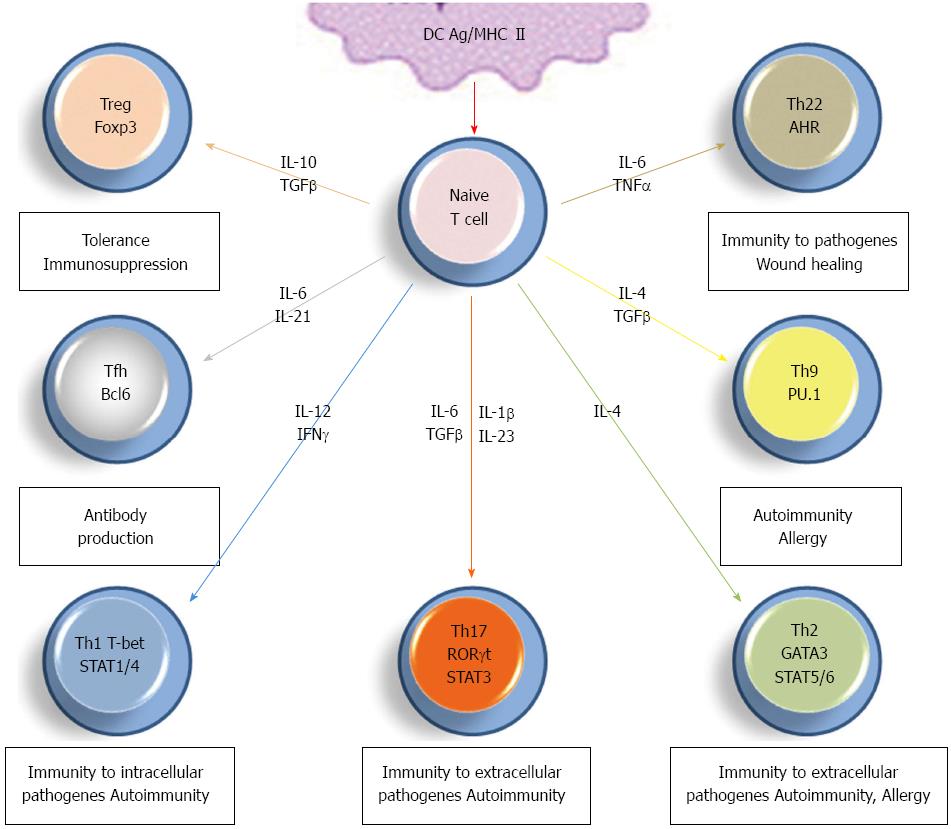 Th0-derived Th9 cells produce IL-9 and are polarized by IL-4-induced transcription factors including STAT6, GATA3 together with the presence of TGF-β, required for Smad activation and intracellular expression of PU.1 transcription factor[15]. Other cytokinin environments were shown to induce Th9 cell differentiation but the exact in vivo maturation pathway of these cells remains to be clarified. The presence of Th9 cells is associated with autoimmune and allergic diseases[15], but their definitive role remains unclear. Th22 and Treg cell differentiation is very close to Th17 cells and will be detailed below.

If IL-17 (also known as IL-17A) was identified decades ago, the concept that Th17 cells represent an additional Th cell subset is recent[2,12]. Several cytokines are involved for optimal development of Th17 cells, including IL-6, TGF-β, IL-23, and IL-1β. This cell subset is characterized by the expression of orphan nuclear receptor RORγt together with the production of high levels of IL-17, IL-17F, IL-22, and IFN-γ[7,16-20]. Other factors can regulate differentiation of Th17 cells, such as prostaglandin E2, IL-21 (detailed in[20]). Since their identification, Th17 cells have been largely described for their critical role during the development of inflammation and autoimmunity[11]. Interestingly, Th22 cells were recently described as an additional effector subset during wound healing and tissue reparation[9,21]. These cells develop in response to tumor necrosis factor (TNF)-α and are characterized by the production of IL-22 but not IL-17[21].

Differentiation of Th0 towards Th17 vs Treg cells is another important checkpoint for immune response and tolerance and many studies addressed factors that may derive this differentiation step (Figure 2)[2,3,22,23]. Cells receiving strong antigenic signaling differentiate into Th17 cells while those receiving lower activation express the transcription factor Foxp3 and polarize into Treg cells[24]. In addition, development toward a Th17 or a Treg phenotype is dependent on the cytokinin environment, such as TGF-β concentration and presence of pro- vs anti-inflammatory cytokines[3,24].

Recently, hypoxia-inducible factor 1 (HIF1)-α and mammalian target of rapamycin (mTOR) were identified as factors positively regulating Th17 differentiation[22,23,25]. In turn, these pathways downregulate Treg cell polarization and constitute potent targets to upregulate Th17 cell development (see below). In addition to IL-17 and IL-17F, Th17 cells are potent producers of IL-22, IL-21, IL-6, TNF-α, CCL20 and IFN-γ, which cooperate together to define the duality of Th17 role: host defense vs inflammation[7,25]. The Th17/Treg ratio is now considered as a critical target for the modulation of inflammatory response and tolerance.

Th17 cells were recently shown to comprise distinct subsets defined by their functions and cytokine secretion profile[24,26]. In addition to initial “regulatory” Th17 cells with important role during immunity to extracellular pathogens[24,25], alternative “inflammatory” Th17 subsets have been identified during autoimmune diseases which require IL-23, IL-1β and IL-6 for their differentiation and were less dependent on TGF-β. Critical distinction between these populations is their cytokine production as regulatory Th17 cells secrete higher levels of IL-10 while inflammatory Th17 cells produce more IL-22, granulocyte macrophage colony-stimulating factor (GM-CSF) and IFN-γ which may explain their proinflammatory property. However, inflammatory Th17 cells seem to comprise various subpopulations that differ by their cytokine release and need further characterization.

RA is chronic autoimmune disease affecting 1% of population and characterized by synovial inflammation correlated with leukocyte infiltration and overproduction of multiple inflammatory mediators[35]. Despite the presence of autoantibodies, chemokines, lipidic mediators and/or oxidative burst, decade use of anti-cytokine based therapeutics clearly enforced their role as key pathogenic factors during most steps of RA disease progression. Meanwhile, variations in patient response to available anti-RA therapeutics corroborate the fact that RA is heterogeneous and complex disease due to various immune pathways involved[36]. Although Th1 immunity during RA is established through multiple experimental data and patients’ observations, accumulating evidence points out the contribution of Th17 cells and IL-17 during disease progression. Beside TNF-α and IL-1β, IL-17 seems to be a critical pathogenic factor in RA and is released by both Th17 and mast cells within inflamed joints[37,38]. Recruitment of Th17 in situ during RA appears to be facilitated by CCL20 expression by synoviocytes, the ligand of CCR6, a chemokine receptor known to be expressed by Th17 cells[38].

Compared to healthy individual, arthritic patients present significantly higher serum IL-17 and IL-22 levels, corroborating their clinical scores and cartilage degradation[39,40]. Accordingly, many mouse models of arthritis enforce Th17/IL-17 role during the pathogenesis of RA[41-43]. Interestingly, mice deficient in IL-1 receptor antagonist (IL-1Ra) have increased number of Th17 cells and spontaneous development of arthritis is abrogated in these animals following IL-17 neutralization[44,45]. Nevertheless, after the onset of arthritis, neutralization of IL-17 prevents disease worsening but does not reduce the arthritis score[44]. Beside IL-17, Th17 cells infiltrated the joints produce IL-22, IFN-γ and GM-CSF that are able to activate bone cells, synoviocytes, as well as cells infiltrated the joints such as macrophages. Activation of these cells results in the production of other pro-inflammatory cytokines, lysing enzymes and chemokine, resulting in increasing migration of immune cells in situ[46,47]. Activated macrophages secrete IL-6, IL-1β and IL-23, cytokines that potentiates Th17 cell development, thus enforcing chronic inflammatory response within RA inflammatory joints. Recent data in mice suggest that Th17 may also increase germinal center B cells to produce higher amounts of autoantibodies[48]. While γδT cells also contribute to IL-17 production, these cells seem to have minor role in RA[49,50]. Finally, while TNF-α would be involved during early RA progression, IL-17 would rather contribute to the chronicity and late pathogenic responses[51]. Together, data accumulated over the years suggest the involvement of the IL-17/Th17 pathway during all progression stages of autoimmune arthritis and related inflammation.

Key role of IL-17/Th17 during the pathogenesis of RA and other major autoimmune inflammatory disorders, such as psoriasis, inflammatory bowel diseases and multiple sclerosis made this pathway a potent target for therapeutic intervention in these affections[52]. Various steps of Th17 cell differentiation or of the secretion of IL-17 and other Th17-related cytokines/factors are now being considered as possible targets to decrease Th17 cell related inflammatory response (Figure 3). Below, we summarize ongoing clinical and experimental attempts addressing this goal. 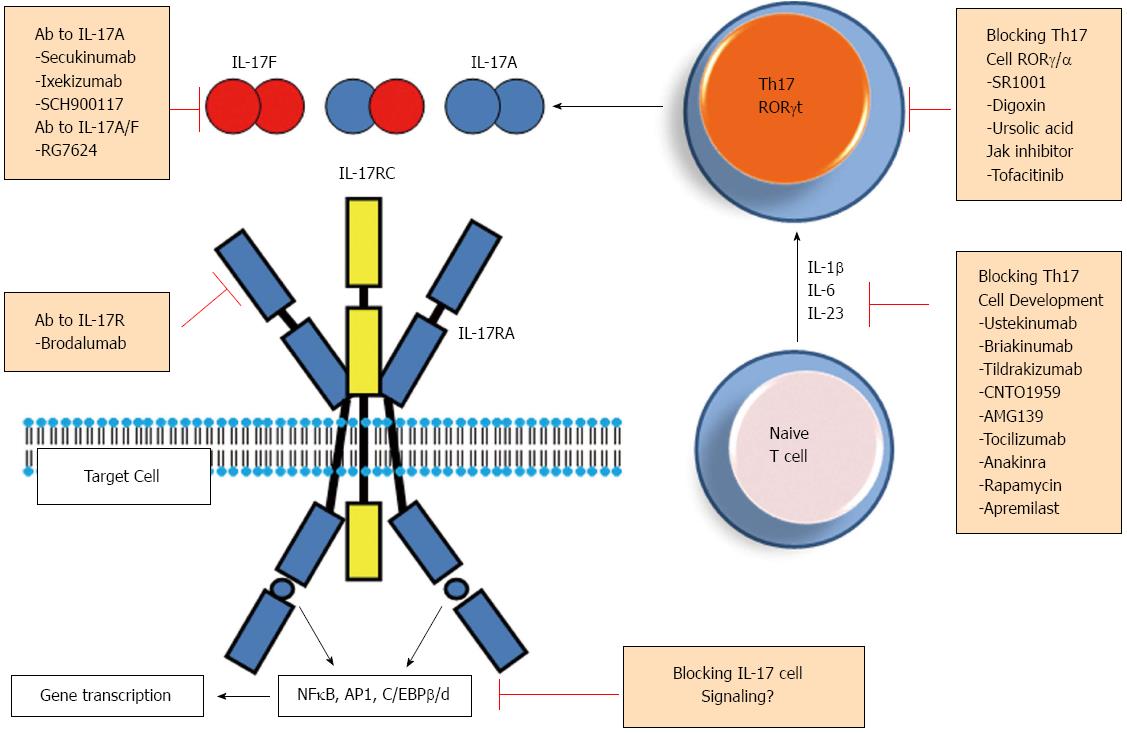 As IL-6, IL-23 and IL-1β are essential during Th17 polarization and functional maturation, it is believed that beneficial role of inhibitors of IL-1 (e.g., Anakinra)[53] and IL-6 (e.g., tocilizumab)[54] may be in part through their ability to target Th17 cell development (Figure 3). Monoclonal antibodies were developed to block p40 protein, a shared subunit between IL-23 and IL-12 (ustekinumab and briakinumab)[55,56]. Such antibodies inhibit biological activities of both IL-23 and IL-12 and hence prevent the development of Th1 and Th17 cells. Selective inhibition of IL-23 by anti-p19 neutralizing antibodies (such as Tildrakizumab, CNTO1959 and AMG139) is currently under various clinical trials (Figure 3)[56,57]. Involvement of phosphoinositide 3-kinase (PI3K)/AkT activation and subsequent mTOR pathway during optimal differentiation of Th17 cells may also be targeted by rapamycin and results in experimental autoimmune diseases are promising[58,59]. Another factor affecting Th17 cell differentiation from naive T cells is HIF-1α[22,23] but pharmaceutical inhibition of this factor appears to be more difficult, due to its’ wide range of activities in normal cell physiology.

Various antibodies were generated to bind IL-17 and neutralize its activities, most are under clinical trials in RA or/and psoriatic patients including anti-IL-17A (Secukinumab, Ixekinumab, SCH900117, and RG4934)[52,56,65,66] or anti-IL-17A/F (RG7624) antibodies[67]. Another antibody was generated to inhibit IL-17 receptor (brodalumab)[52,67] and was recently shown to block both IL-17RA and IL-17RC subunits (Figure 3). Finally, as IL-17 synergizes with TNF-α to amplify the inflammatory response, inhibition of both cytokines is under clinical trial in RA[68]. Beside IL-17, a specific antibody to IL-22 was generated (Fezakinumab)[69] to inhibit this cytokine, but the trial was discontinued.

Among CD4+ T lymphocytes, Th17 are important functional cells due to their role during infection and autoimmune diseases. Together with Th1 cells, their role during inflammatory pathogenic response in RA patients makes these cells an interesting target for the development of specific biotherapy or co-therapy to decrease both ongoing inflammatory response and disease chronicity.