Intestinal spirochetosis (IS) is caused by Brachyspira colonization of the gastrointestinal tract. Some patients are asymptomatic, while others present with gastrointestinal complaints such as abdominal pain, diarrhea, or gastrointestinal bleeding. However, the clinical significance of asymptomatic IS is unclear, and guidelines are lacking regarding decision to treat.

A 73-year-old male with peptic ulcer disease and gastroesophageal reflux was evaluated for elevated liver enzymes. He was diagnosed with chronic hepatitis B virus and prescribed entecavir. Additionally, he was leukopenic and had stage 4 liver fibrosis on transient elastography. After 5 mo, the patient returned for esophagogastroduodenoscopy and screening colonoscopy. He denied any gastrointestinal symptoms at that time. Findings included grade I distal esophageal varices, mild portal hypertensive gastropathy, and patchy nodular gastric antral mucosa. On colonoscopy, several polyps were removed. Hematoxylin and eosin stain of mucosa adjacent to the polyps revealed a “false brush border,” and Steiner stain identified spirochetes adherent to the mucosa. These pathology findings confirmed the diagnosis of IS. He was managed conservatively with careful observation and without antibiotic therapy via a multidisciplinary approach between gastroenterology and infectious disease. He remained asymptomatic at the 7-wk follow-up.

This case reports the finding of incidental, asymptomatic IS in a leukopenic patient with hepatitis B virus. Conservative management was appropriate.

Intestinal spirochetosis (IS) is a condition of intestinal colonization with Brachyspira species, typically Brachyspira aalborgi or Brachyspira pilosicoli[1]. The prevalence of IS varies with geographic location. Estimates suggest a prevalence of 11%-64% in developing countries and 1%-5% in North America and Europe[2]. Colonization is more common in people with HIV and men who have sex with men[1]. Patients with IS are more often male, and the mean age at diagnosis is 51[3]. The mode of transmission is not clear; however colonization may result from exposure to infected water, animals, birds, or feces[4]. A literature review was performed focusing on asymptomatic or incidental IS with the following search terms: Intestinal spirochetosis, intestinal spirochaetosis, colonic spirochetosis, colonic spirochaetosis, asymptomatic, and incidental. Only reports describing adults without gastrointestinal symptoms and including decision to treat were considered. This search revealed a paucity of literature describing the clinical implications of infection or evidence-based treatment recommendations in asymptomatic patients with IS. We present the case of an asymptomatic patient with an incidental finding of IS during colonoscopy and discuss the management strategy.

A 73-year-old male presented to our gastroenterology practice for follow-up esophagogastroduodenoscopy (EGD) 5 mo after an initial EGD. He simultaneously underwent screening colonoscopy as his last colonoscopy was more than 10 years prior. He was feeling well and reported no gastrointestinal symptoms.

This patient initially underwent EGD 5 mo prior to this visit due to melena and symptomatic anemia. EGD findings were notable for Los Angeles Grade A esophagitis and a large, cratered gastric antral ulcer with pigmented spots. He was diagnosed with peptic ulcer disease and gastroesophageal reflux and was discharged on pantoprazole 40 mg twice daily. At that time, a workup for abnormal liver enzymes revealed a new diagnosis of chronic hepatitis B virus (HBV). He tested negative for HIV, and entecavir was eventually initiated. Transient elastography showed stage 4 liver fibrosis. He was also leukopenic with a white blood cell count ranging from 2700 to 3900.

Pertinent social history included a history of military service with international travel to Guantanamo Bay, Cuba, and Greece, and remote alcohol and tobacco use. He had one tattoo that was obtained 50 years prior. He denied recent or remote history of unprotected sexual intercourse and denied history of sexually transmitted diseases. Family history was non-contributory.

The patient was evaluated 1 wk prior to his EGD and colonoscopy, at which time he was afebrile and mildly hypertensive to 148/80. Body mass index was 28.6. The patient’s exam was benign, with a soft, non-tender, and non-distended abdomen. Bowel sounds were present and normal. 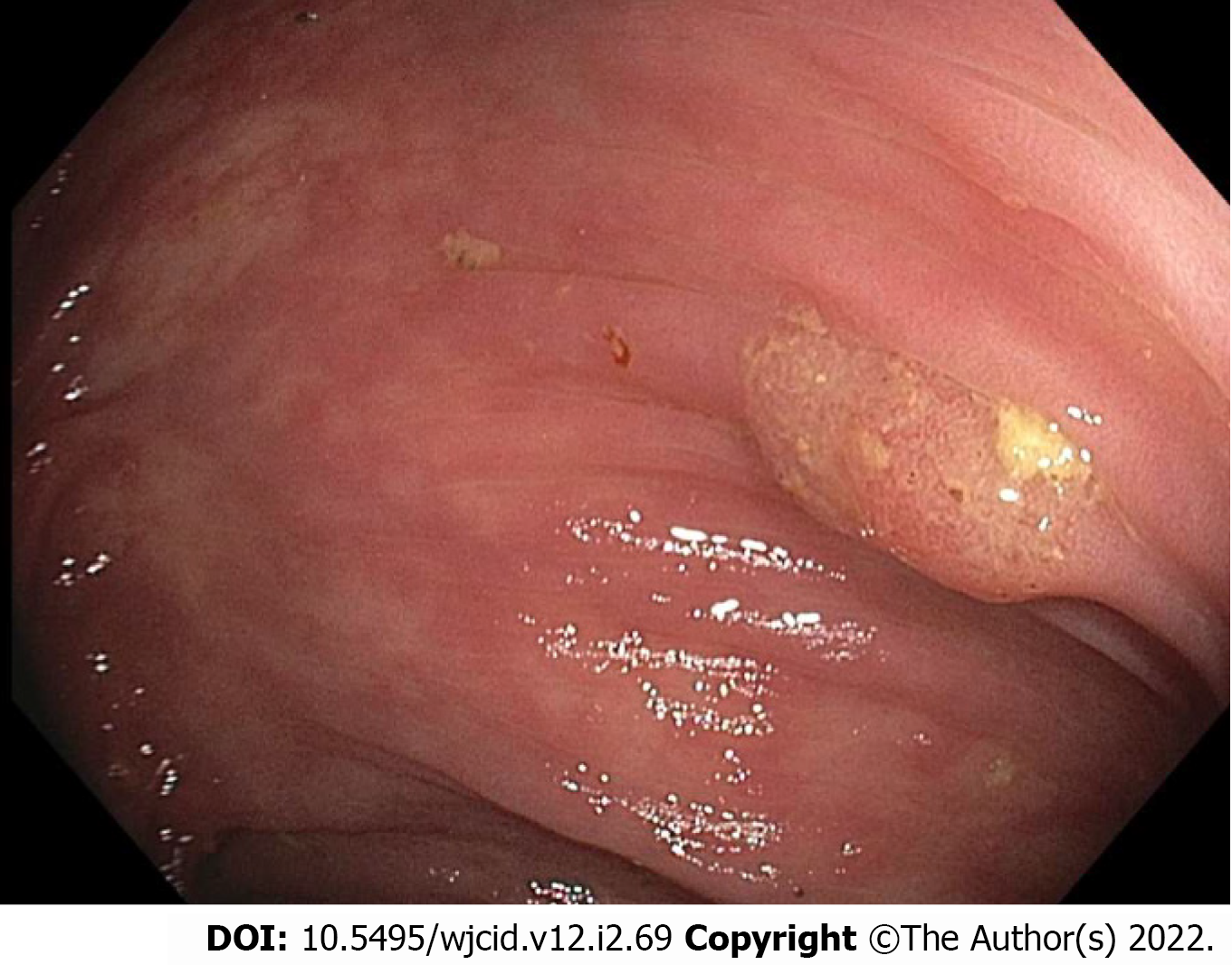 Pathology results of the resected colon polyps showed tubular adenomas, a sessile serrated lesion, and a hyperplastic polyp. Incidentally, a hematoxylin and eosin stain of the colonic mucosa adjacent to the polyps identified intestinal spirochetosis appearing as a “false brush border” (Figure 2A), with a Steiner stain confirming the presence of spirochetes (Figure 2B).

The final diagnosis in this case is asymptomatic IS.

In this case of asymptomatic IS, the patient was managed conservatively without antibiotics.

The patient followed up with both gastroenterology and infectious disease specialists. He remained asymptomatic at the 7-wk follow-up, and a repeat HIV screen at that time was negative. Thus, he was not prescribed antibiotics and was closely followed for development of any gastrointestinal symptoms.

We describe an asymptomatic case of IS diagnosed via histology of tissue obtained during routine colonoscopy. Histologic findings in IS classically include a “brush-like” appearance of organisms oriented perpendicular to the epithelial surface of the intestine[5]. This is consistent with the findings seen on stains of our patient’s colonic tissue. A large study found that 90% of IS biopsies showed no changes on histology other than the presence of spirochetes[6]. However, there have been several reports of histologic changes, notably inflammation with macrophages, neutrophils, eosinophils, and lymphoid follicles on biopsy[6-8]. Our patient represents a case of isolated IS, with identification of spirochetes without any changes on the cellular level.

Additionally, this report describes a case of IS associated with a hyperplastic polyp, tubular adenomas, and a sessile serrated lesion. On colonoscopy, some patients with IS have no remarkable findings, while others have had polyps, mucosal erosions, or ulcerations[5,9]. Several case reports describe findings of IS in patients with colon polyps of varying histology (including adenomatous, hyperplastic, sessile serrated lesions, and other polyps)[10-14].

IS is often an incidental finding, and its clinical implications are unclear. Several reports describe asymptomatic patients found to have spirochete colonization[11,15-18]. However, other reports have described the presence of various gastrointestinal symptoms including diarrhea, changes in bowel habits, abdominal pain, and overt or occult gastrointestinal bleeding[12,17,19-21]. A study of 209 patients with IS found 46% of patients reported abdominal pain, 51% diarrhea, and 13% alternating constipation and diarrhea[3].

Notably, IS has been frequently reported in immunocompromised patients, such as those with HIV or taking immunosuppressive drugs[22-24]. There are additional case reports of IS in patients with chronic HBV[5] and hepatitis C[8,25]. In the present case, leukopenia in the setting of chronic liver disease secondary to HBV may have played a role in the development of spirochete colonization. The origin of this patient’s HBV infection is not certain. His history is notable for having one tattoo, but he denied sexual or military exposures that would otherwise suggest a source for his HBV infection.

As the clinical significance of IS is controversial, need for treatment has been debated. Recommendations from the 2021 European Academy of Dermatology and Venereology Guidelines support treatment for IS with metronidazole 500 mg twice daily or 250 mg three times daily for a 14-d course[1]. However, this recommendation does not differentiate between symptomatic and asymptomatic patients. A large study found that 40% of IS patients received treatment, and of these 86% were treated with metronidazole. However, only 52% of treated patients reported improvements in symptoms[3]. In an earlier study, 17 patients were treated with metronidazole 500 mg three times daily for 10 d, and 15 patients had resolution of symptoms[9]. Evidence is lacking for treatment guidelines in the asymptomatic population. A comprehensive literature search identified a limited number of publications reporting decision to treat in 5 cases of asymptomatic adults with IS. Of these cases, 4 patients were not treated[5,11,16,18]. The fifth patient was treated with metronidazole and experienced resolution of the IS infection[15]. Due to our patient’s continued lack of symptoms, he was not treated with antibiotics and is being managed with close follow-up.

IS is a condition that has not been well-studied. Clinical implications are not clear, and thus treatment guidelines are lacking. Particularly in patients who are asymptomatic, the need for treatment is controversial. This report describes an incidental finding of IS in an asymptomatic patient with a history of HBV and leukopenia. This patient was managed without antibiotics and was followed carefully. He remained asymptomatic 7 wk after diagnosis. When evaluating immunocompromised patients, including those with HIV or viral hepatitis, one should consider the possibility of IS colonization, particularly in patients with gastrointestinal symptoms. This case highlights the feasibility and success of conservative management without use of antibiotic therapy in asymptomatic IS. Additionally, close monitoring with collaboration and shared decision-making between gastroenterologists and infectious disease specialists for asymptomatic IS was beneficial. Future research is needed to evaluate the impact of Brachyspira colonization of the gastrointestinal tract and to establish recommendations for treatment and follow-up, specifically in asymptomatic patients.