To evaluate the presence of the so called “statin escape” phenomenon among hyperlipidemic subjects attending a lipid clinic.

These data confirm the existence of an escape phenomenon among statin-treated individuals. The clinical significance of this phenomenon remains uncertain.

Core tip: This was a retrospective study aiming to evaluate the presence of the so called “statin escape” phenomenon among hyperlipidemic subjects attending a lipid clinic and elucidate any potential confounding factors. This study confirms the limited bibliography reporting on statin escape phenomenon and its quite high prevalence. However, due to the small number of eligible participants, we were not able to identify potential predictors for the statin-escape phenomenon or establish an association between statin escape and incidence of cardiovascular disease. In this context, further investigation on the underlying pathophysiology of this phenomenon and its potential clinical ramifications is required.

Statins remain the cornerstone therapy for primary and secondary cardiovascular prevention, mainly due to their ability to reduce low-density lipoprotein cholesterol (LDL-C)[1]. Nevertheless, a notable cardiovascular risk remains in statin-treated individuals, which has been attributed to other residual factors, such as hypertension, diet and adherence to therapy[2]. Recently, the so called “statin escape” phenomenon has been reported as an independent cardiovascular risk factor in patients with acute myocardial infarction on prolonged statin treatment[3]. This phenomenon was first described in small studies including patients with familial hypercholesterolemia[4,5] and afterwards in the Expanded Clinical Evaluation of Lovastatin (EXCEL) study[6]. The latter reported an increase in LDL-C levels after the first year of statin treatment, despite a marked decrease in those levels 1 mo after treatment initiation[6]. So far there have been few reports on this phenomenon and its underlying mechanisms remain obscure[5,7-9].

The aim of this study was to provide additional data on the possible statin escape phenomenon based on the experience of a lipid clinic and try to elucidate potential risk factors.

This was a retrospective (from 1999 to 2013) observational study as previously described[10-12]. Briefly, dyslipidemic adults followed-up for ≥ 3 years in the Outpatient Lipid Clinic of the University Hospital of Ioannina in Greece were included. A complete assessment of serum lipid profile along with cardiovascular risk factors and concomitant treatment was available. The study protocol was approved by the Institutional Ethics Committee.

The evaluation of adherence to medication was based on the Hellenic national e-prescription web database. Subjects were classified according to their compliance with treatment as good or poor compliers if they refill ≥ or < 80% of their expected prescriptions over time, respectively. We excluded those individuals meeting one of the following criteria: Use of statin therapy at baseline visit, discontinuation of statin treatment at most recent visit, change in statin treatment during follow-up and poor compliance to treatment. Statin escape phenomenon was defined as an increase in subject LDL-C levels at the most recent visit by > 10% compared with the value at 6 mo following initiation of statin therapy[8].

Continuous variables were tested for normality by the Kolmogorov-Smirnov test and logarithmic transformations were performed if necessary. Data are presented as mean ± standard deviation (SD) and median [interquartile range (IQR)] for normal and non-normal distributed data, respectively. χ2 tests were performed for categorical values. The difference of variables between ≥ 2 groups was assessed by analysis of variance (ANOVA) and post hoc least significant difference tests were used for the comparison of variables or ratios of interest between the groups. Paired sample t tests were performed to assess the change of variables within each study group. Analysis of covariance (ANCOVA) was performed to assess the difference of variables between 2 subject groups, after adjusting for their baseline values. Binary logistic regression was performed to elucidate potential predictors for statin escape phenomenon. Two tailed significance was defined as P < 0.05. Analyses were performed with the Statistical Package for Social Sciences (SPSS), v21.0 software (SPSS IBM Corporation, Armonk, New York, United States).

Of 1240 hyperlipidemic individuals, 181 were considered eligible for the present analysis (Figure 1). Study participant baseline characteristics are shown in Table 1. Of 181 eligible subjects, 56 (31%) exhibited the statin escape phenomenon and 125 (69%) did not. There were no differences between these 2 groups apart from the higher baseline prevalence of coronary heart disease noticed in the escape group (7% vs 1%, P < 0.05). As shown in Table 1, there was no difference between the 2 groups regarding statin treatment. No participant received any non-statin lipid-lowering therapy (i.e., fibrate, ezetimibe). In addition, no difference was found regarding drugs interfering with cholesterol or statin metabolism (i.e., β-blockers, thiazides, pioglitazone, atypical antipsychotics, levothyroxine, clopidogrel or proton-pump inhibitors; Table 1). 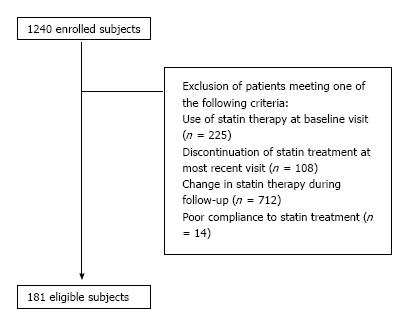 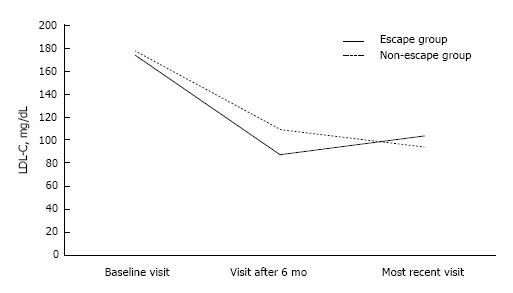 Binary logistic regression assessing baseline characteristics along with the changes in BMI, eGFR or HbA1c levels during follow-up did not reveal any significant predictor for the statin escape phenomenon.

During a median follow-up of 4 years, 1 of 56 escape individuals and 6 of 125 non-escape subjects were diagnosed with incident cardiovascular disease (P = NS for the comparison between the 2 groups).

The present report confirms the existence of statin escape phenomenon in clinical practice.

Two small studies including patients with familial hypercholesterolemia were the first to notice a paradox rebound cholesterol increase following statin dose increase[4,5]. Since then, the EXCEL study along with others, has described this so called statin escape phenomenon[3,5-7]. Our results showing an initial marked LDL-C reduction but followed by a > 10% LDL-C increase after prolonged statin treatment in subjects exhibiting the statin escape phenomenon are in line with the results of these studies[3,5,7]. Similar to previous studies, we did not find any predictors for this phenomenon[3,5,7]. A recent study showed that statin escape phenomenon not only exists, but also might be an independent predictor of cardiovascular disease[3]. The mechanisms attributing to the statin escape phenomenon have not yet been elucidated. The failure of statin therapy to decrease LDL-C levels on a long-term basis may be attributed to poor compliance with lipid-lowering treatment and diet. Particularly, an increased intake of cholesterol in the diet may contribute to intermittent variations in cholesterol levels. In addition, weight changes or a poor glycemic control in diabetic individuals could also cause a LDL-C increase, which could be wrongfully considered as statin escape phenomenon. After excluding subjects with these characteristics, one study concluded that only 1.2% of 161 study participants exhibited the statin escape phenomenon, although 28% of those were initially considered to meet the criteria of statin escape[7]. Despite the fact that no data regarding diet and exercise was available in our study, there was no significant difference between groups in terms of BMI change, glycemic control and kidney function.

Although we checked for adherence to therapy, our study might have included non-compliant individuals. It may be possible that the escapers adhered less to statin therapy and diet after seeing a large drop in their LDL-C levels. Another possible explanation for the statin escape phenomenon could be the concomitant therapy, since a variety of drugs could increase LDL-C lowering action of statins by inducting cytochromes CYP450-3A4 and 2C9[13,14]. According to a few experimental studies, statin escape phenomenon could be attributed to a slow increase in the 5-hydroxy-3-methylglutaryl-coenzyme A (HMG-CoA) reductase activity or to an increase in proprotein convertase subtilisin kexin-like 9 (PCSK9) levels caused by prolonged statin therapy[9,15-19].

Our data suggest that statin escape phenomenon is indeed noticed in clinical practice, although its clinical significance remains uncertain. Patients with larger than anticipated initial LDL-C lowering should be carefully monitored.

A few studies have reported on the so called “statin escape phenomenon”, which describes an increase in low-density lipoprotein cholesterol (LDL-C) levels after prolonged statin therapy despite an initial marked decrease. Statin escape phenomenon has been recently reported as an independent cardiovascular risk factor.

Very few studies have reported on statin escape phenomenon and its underlying mechanisms remain obscure. The present study contributes to clarifying whether this phenomenon exists in clinical practice.

This was a retrospective observational study with a small sample size. However, only the EXCEL study, which is the only randomized trial reporting on statin escape phenomenon and a retrospective cohort had larger samples. The small number of eligible participants did not allow any analysis to identify potential predictors for the statin-escape phenomenon. Additionally, due to small sample and low incidence of cardiovascular disease this study did not have the power to stablish an association between statin escape and incidence of cardiovascular disease. Nevertheless, this study confirms the limited bibliography reporting on statin escape phenomenon and its quite high prevalence (28%-31%).

This study suggests that further investigation on the underlying pathophysiology of the statin escape phenomenon and its potential clinical ramifications is required.

This study is well written and the patients have been well selected although several variables could have influenced the results.