Epidermoid cyst of intrapancreatic accessory spleen is exceedingly rare; only 30 new cases have been reported in the English literature over the last 30 years. An accurate preoperative diagnosis was made in almost none of them because of the lack of reliable preoperative diagnostic methods. In this report, we present a case diagnosed with fluorine-18 fluorodeoxyglucose positron emission tomography (FDG-PET). A 41-year-old female who had breast cancer was routinely followed up by measuring the concentration of tumor makers. An increasing level of serum carbohydrate antigen 19-9 was detected and a cystic lesion located at the tail of pancreas was found by ultrasonography. A whole body fluorine-18 FDG positron emission tomography was performed because of a high suspicion for either a malignancy of the pancreas or a recurrence of breast cancer. No increased uptake of FDG was noted and therefore the cystic lesion was considered as pancreatic benign disease. Because pancreatic malignancy could not be entirely ruled out, distal pancreatectomy and splenectomy were performed. The final pathological diagnosis was epidermoid cyst of intrapancreatic accessory spleen (ECIAS). The FDG-PET findings matched the histopathology. A literature review reveals that the common clinical manifestations of ECIAS include asymptomatic findings on clinical examination, an occasional increase in tumor makers on laboratory results and occurrence only in the pancreatic tail. It is often misdiagnosed due to its extreme rarity and lack of a specific radiographic sign. There is no evidence of malignancy in ECIAS. Open or laparoscopic spleen preserving distal pancreatectomy is the minimally invasive procedure that would provide the best surgical management for epidermoid cyst of intrapancreatic accessory spleen.

Core tip: Epidermoid cyst of intrapancreatic accessory spleen (ECIAS) is extremely rare and an accurate preoperative diagnosis is almost never made. In this article, a case diagnosed with fluorodeoxyglucose positron emission tomography scanning is presented; it is also the first case from China. A literature review of the clinical characteristics of ECIAS is also given. We suggest that open or laparoscopic spleen preserving distal pancreatectomy is the minimally invasive procedure that would provide the best surgical management for ESIAS.

Epidermoid cyst of intrapancreatic accessory spleen (ECIAS) is extremely rare. Since 1980 when Davidson et al[1] reported the first case, only 30[1-28] new cases have been reported in the English literature. Almost none of them were accurately diagnosed preoperatively because of the lack of reliable preoperative diagnostic methods. In this article, a case diagnosed with fluorine-18 fluorodeoxyglucose positron emission tomography (FDG PET) scanning is presented, along with a review of the clinical characteristics of ECIAS experienced in our center and all the cases described in the English literature.

A 41-year-old Asian female who had infiltrating ductal carcinoma of the breast was treated by modified radical mastectomy on June 9, 2008 and was then routinely followed up by measuring the concentration of tumor makers. A raised level of serum carbohydrate antigen (CA) 19-9 (68.57 U/mL, reference range, less than 37 U/mL) was detected on 7th April, 2009. Four months later, the CA 19-9 level had almost doubled to 120.49 U/mL. At the same time, abdominal ultrasonography indicated a cystic lesion located at the tail of pancreas. The patient was then referred to our department for more examinations.

The patient had no symptoms of gastrointestinal or abdominal discomfort. She had no history of abdominal trauma, pancreatic insufficiency or pancreatitis. Her family history was unremarkable. Physical examination showed no abnormalities. Except for a raised level of CA 19-9, the remaining blood tests, including carcinoembryonic antigen (CEA), CA125 and serum amylase, were within normal limits. A computed tomography (CT) scan of the abdomen revealed a 4 cm round cystic lesion anterior to the spleen near the tail of the pancreas with enhancement of the cystic wall (Figure 1). Based on the raised CA 19-9 level, pancreatic tail cyst and history of breast cancer, malignancy of the pancreas or recurrence of infiltrating ductal carcinoma of the breast was highly suspected.

Figure 1 Computed tomography scan of the abdomen revealed a 4 cm round cystic lesion (arrow) anterior to the spleen near the tail of the pancreas with enhancement of the cystic wall. A: Plain computed tomography (CT) scan; B, C: Enhanced CT scan.

A whole body fluorine-18 FDG PET (Siemens Biograph 64HD, Germany) was performed. After an overnight fast, the patient had an intravenous injection of 350 MBq FDG. The patient’s blood glucose level was examined just before the administration of FDG to exclude the interference factor of hyperglycemia. After 40 min of injection, emission data was obtained and the images were analyzed. The results showed that no increased uptake of FDG was detected in the whole body, including the pancreatic tail cyst, previous operative area and axillary lymph nodes (Figure 2). Based on FDG PET images, the cystic lesion was considered as pancreatic benign disease. However, 6 mo later, the CA 19-9 level had doubled again to 259.67 U/mL. She was admitted to our hospital to undergo further treatment. 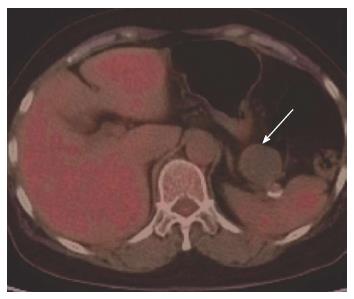 Since cystic pancreatic malignancy could not be entirely ruled out, the patient underwent an exploratory laparotomy, which revealed a mass of 4 cm in diameter located in the tail of pancreas. Therefore, distal pancreatectomy and splenectomy were performed. The surgical specimen contained a 4.2 cm cyst in its greatest diameter, located near the pancreatic tail (Figure 3). On histopathological examination, the cyst was filled with reddish brown fluid. Microscopically, the cyst was covered with stratified squamous epithelium and was surrounded by normal splenic tissue (Figure 4). Moreover, immunohistochemical analysis showed a strong expression of cytokeratin but Ki67, P53, Vimentin and CD56 were not expressed. The final pathological diagnosis was ECIAS. 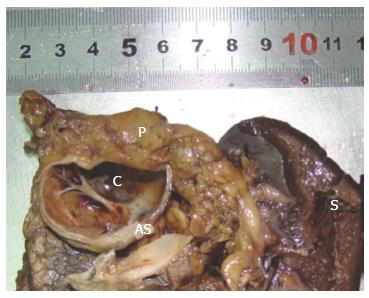 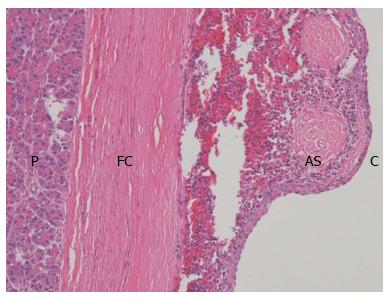 Figure 4 Microscopically, the cyst (C) was covered with stratified squamous epithelium and was surrounded by normal splenic tissue. A fibrous capsule (FC) separates the intrapancreatic accessory spleen (AS) from pancreas (P) (HE, × 100).

The patient was discharged on postoperative day 11 and her serum CA 19-9 value declined to a normal level 1 mo after surgery. During the past 2 years of follow up she has been doing well.

The frequency of accessory spleen is more than 10% and nearly 20% of these are in or attached to the tail of the pancreas[5,29]. Cystic lesions are rare in the spleen and those most frequently found are parasitic[30]. Nonparasitic splenic cysts are histologically classified as either true or false cysts, according to the presence or absence of an epithelial lining on the inner surface[31]. The most common nonparasitic cysts in the spleen are epidermoid cysts[31].

Only 30 cases of ECIAS have been reported in the English literature since the first one reported by Davidson et al[1] in 1980 (Table 1). ECIAS mostly occurs in middle-aged patients (average age, 47.4 years; range, 12 to 70 years). It is more common in females than males (female: male ratio, 19:12). All of the cases were found in the tail of pancreas and the size of cyst ranged from 1.5 cm to 15 cm (average, 4.35 cm). Tumor markers such as CEA and CA 19-9 (range, 48 to 647 U/mL) increase occasionally, and fall to the normal limit after excision of the lesion. It is also notable that 20 cases were from Japan, 6 from the United States, 2 from South Korea, 1 from the United Kingdom, 1 from Australia, and this is the first case from China.

Rarity and nonspecific symptoms of ECIAS make it challenging for surgeons to accurately make a diagnosis prior to surgical treatment. More than half of the patients were asymptomatic and the others were admitted with complaints (9 with abdominal pain, 2 with abdominal discomfort, 2 with weight loss, 1 with left back pain, 1 with fever, and 1 with anorexia). Only 2 reported cases suspected the preoperative differential diagnosis of ECIAS[11,18].

Several imaging techniques are available but the radiological features lack specificity to accurately identify the lesion. Abdominal ultrasonography and CT are usually the first tools which detect the lesion. However, images on abdominal ultrasound and CT scan look similar to pancreatic cystic neoplasm. This explains why most of the cases had the first preoperative clinical diagnosis of mucinous cystic neoplasm or pancreatic cystic neoplasm and were then followed by aggressive surgical management. Recently, Hu et al[32] found that the diagnosis of an ECIAS should be considered when enhancing the cystic wall of the lesion in the pancreatic tail similar to the spleen during multiphasic scans in CT. The signal intensity of ECIAS is not consistent on magnetic resonance images (MRI). The cystic component occasionally shows low signal intensity on T1-weighted images and high signal intensity on T2-weighted images[9,16,24], and sometimes it shows high signal intensity on both T1 and T2-weighted images[18,27]. Furthermore, Motosugi et al[33] suggested that in more than half of the cases of epidermoid cyst, heterotopic spleen surrounding the cyst can be detected and a noninvasive diagnosis is possible using super paramagnetic iron oxide enhanced MRI. Including the case we present, there are only 2 reported cases of ECIAS that have used fluorine-18 FDG PET scanning. Our findings showed no uptake of FDG and matched a maximum standard-uptake value (SUV) of 1.7 reported by Iwasaki, which means no evidence of malignancy[24]. However, scanning by FDG PET could not entirely rule out malignant cystic neoplasm because false-negative results of FDG PET have also been reported[34].

On endoscopic retrograde pancreatography (ERP)[11,15,27], endoscopic retrograde cholangiopancreatography (ERCP)[26] and magnetic resonance cholangiopancreatography (MRCP)[16], it has been shown that there are no communications between the cystic lesion and the pancreatic duct. Angiography shows a vascular mass[1] which is fed by caudal pancreatic arteries[13,16]. Endoscopic ultrasonography (EUS) suggests the existence of a cystic lesion[11,12,15] with septa surrounded by a solid area in the tail of the pancreas[16,20,26,27]. EUS elastography shows inhomogeneous hardness in an epidermoid cyst[26]. Fine needle aspiration (FNA) reveals fluid with elevated CA 19-9 and CEA and points towards a possibility of pancreatic malignancy[19,20,28].

As listed in Table 1, 25 patients received distal pancreatectomy combined with splenectomy (DPS), 5 patients received spleen preserving distal pancreatectomy (SPDP), and only 4 of these were performed with laparoscopic assistant (LA). Based on our 3 years follow up and other reported cases (from 6 to 36 mo), there is no evidence of recurrence and metastasis[1,9,16,18,24,27,30]. ECIAS is benign and surgical treatment should be avoided when it is asymptomatic and small. However, resection should be considered for all cystic tumors of the pancreas because they are either malignant or have the potential for malignant degeneration[35]. SPDP and LA-SPDP would be the minimally invasive treatment of choice if the possibility of malignancy could be excluded. Laparoscopic pancreatic procedures are feasible and safe in patients with benign or low grade malignancies. They also minimize blood loss and morbidity, while also reducing hospital stay and promoting early recovery[36].

In conclusion, the common clinical manifestations of ECIAS include asymptomatic findings on clinical examination, raised levels of some tumor makers on laboratory investigations and occurrence only in the pancreatic tail. It is often misdiagnosed due to its extreme rarity and non-specific radiographic findings. There is no evidence of malignancy in ECIAS. As minimally invasive procedures, SPDP and LA-SPDP would be the best surgical management. Nevertheless, it also goes without saying that ECIAS should not be forgotten as a differential diagnosis of pancreatic cystic lesion.