The purpose of this commentary is to highlight the emerging role of IgE on airway smooth muscle (ASM) cells function through activation of the high-affinity Fc receptor for IgE. We discuss the potential implications of IgE-mediated ASM sensitization in airway inflammation and remodeling, the hallmark features of allergic asthma.

Core tip: In this commentary, we summarize the emerging role IgE in influencing airway smooth (ASM) muscle function in allergic asthma. Recent intriguing findings from ours and other groups suggest a potential proinflammatory and pro-remodeling role of IgE-mediated activation of its high-affinity Fc receptor, i.e., FcεRI, on ASM tissue in allergic asthma.

Airway remodeling is a hallmark feature of allergic asthma, characterized by thickening of the reticular basement membrane (RBM) and numerous structural alterations to the epithelium, submucosa, and airway smooth muscle[1]. Among these, increased airway smooth muscle (ASM) mass, potentially due to yet poorly defined mechanisms is considered a major determinant of lung function. In addition, increased ASM mass is also believed to result in airway hyperresponsiveness (AHR), contributing to a decline in lung function in asthma[1]. Interestingly, the ASM proliferation was shown to be a dynamic process in long-standing severe asthma[2]. Thus, the mechanisms defining ASM proliferation are of significant value in pursuit of novel asthma therapeutics. While there is some evidence from childhood studies and primate models arguing that airway structural changes precede the inflammatory process[3,4], a vast majority of data suggest that inflammation, particularly resulting from IgE-driven processes, initiates the airway structural alterations, culminating in a remodeled airway wall[1]. IgE exerts its effector functions mainly through its receptors, the high-affinity Fc receptor (FcεRI), and the low-affinity receptor (FcεRII/CD23)[5]. Given the central role of IgE in allergic inflammation, strategies blocking IgE or its interaction with Fc receptors have been developed to treat allergic asthma. The proof-of-concept comes from a clinically-approved humanized anti-IgE antibody (Omalizumab) that prevents the binding of free IgE to FcεRI and has shown tremendous clinical benefits in allergic asthma[6].

The allergic cascade initiated by IgE establishes an inflammatory milieu in asthmatic airways, characterized by the abundance of eosinophils, mast cells, and Th2 cells that produce cytokines such as IL-4, IL-5 and IL-13[7]. While IgE-mediated effector functions on mast cells and basophils, including the production of Th2 cytokines is known to drive airway remodeling[8], it is often asked whether IgE can directly influence the ASM function and contribute to airway inflammation and/or remodeling? About a decade ago, we had first demonstrated that cultured primary human ASM cells from bronchus and trachea express FcεRI in vitro, and in vivo within the bronchial biopsies of allergic asthma patients. IgE and anti-IgE-mediated FcεRI cross-linking led to the release of Th2 cytokines (IL-4, IL-5 and IL-13) and CC chemokine (eotaxin-1/CCL11) in ASM cells[9]. Furthermore, pro-asthmatic factors such as tumor necrosis factor (TNF) and IL-4 enhanced the abundance of FcεRI and amplified IgE-induced chemokine (eotaxin-1/CCL11, RANTES/CCL5, IL-8/CXCL8, and IP-10/CXCL10) release in ASM cells via transcriptional mechanisms[10]. Complementary findings from another group showed that IgE stimulation of ASM cells from asthmatic patients exhibit de novo synthesis and release of higher levels of pro-asthmatic factors including IL-4, IL-6, IL-8/CXCL8 and TNF compared with the ASM cells obtained from chronic obstructive pulmonary disease patients or from healthy controls[11]. Recently, we have also shown that IgE can induce the expression of smooth muscle myosin light chain kinase, a component involved in ASM contractile machinery[12]. Interestingly, IgE induced a prominent Th2-favoring cytokine, thymic stromal lymphopoietin (TSLP) through the activity of spleen tyrosine kinase (Syk), and nuclear factor kappa B and activator protein-1[13]. This data suggested that FcεRI activation on ASM may directly regulate the immune response within the airways via induction of TSLP. Notably, ASM cells express a functional TSLP receptor, which upon activation leads to chemoattractants (CCL11/eotaxin-1 and CXCL8/IL-8) and proinflammatory cytokine (IL-6) release[14], induces ASM migration[15], and enhances intracellular Ca2+ mobilization in ASM[16]. Interestingly, mast cells also produce and respond to TSLP[17,18], and it has been proposed that TSLP may bridge the ASM-mast cell cross-talk[18]. We propose that the TSLP produced by ASM and/or mast cells via IgE/FcεRI pathway may act in an autocrine/paracrine manner on ASM which might in fact explain the “atopic” or “pro-allergic” state of ASM in allergic asthma that has been linked to the development of AHR in large epidemiological studies, particularly the Tucson Respiratory Cohort Study[19]. Overall, these studies clearly suggest a pro-inflammatory role of IgE-FcεRI interaction in ASM cells and arguably may explain some of the benefits of Omalizumab in allergic asthma[6].

Importantly, one of the most compelling findings was that IgE could induce de novo DNA synthesis and proliferation in primary human ASM cells[20], and that this proliferative response was inhibited by anti-IgE Omalizumab pre-treatment[21]. IgE-induced proliferation involved the activity of Syk, and intracellular signaling Erk 1/2, p38, and JNK MAPK, and Akt kinases. Lentivirus-shRNA-mediated experiments showed that STAT3 activity is indispensable for IgE-induced ASM cell proliferation[20]. Parallel work by others showed that IgE stimulation of ASM cells from asthma patients enhanced the deposition of collagen type I and VII through the activation of Erk1/2 MAPK downstream of FcεRI; whereas IgE stimulated the deposition of collagen type III, and fibronectin through both FcεRI and FcεRII/CD23, as well as Erk1/2 and p38 MAPK pathways[21]. These data suggest that IgE may directly induce pro-remodeling changes in ASM in vivo. Moreover, the finding that Omalizumab prevents IgE-induced remodeling effects[21] rationalizes the use of anti-IgE strategies in the modulation of airway remodeling. Although MAPK such as Erk1/2 is known to interact with STAT3 in ASM cells[22], it remains yet to be determined how IgE facilitates cross-talk among MAPK, STAT3 and other signaling pathways in pro-mitogenic signaling in ASM cells. This is even more interesting of a question since therapeutics targeting MAPK signaling, e.g., p38 inhibitor, has already been in clinical trials of asthma and COPD[23].

It is clear that IgE induction of ASM proliferation is a significantly important finding since IgE can gain access to the smooth muscle tissue (Figure 1), likely due to: (1) microvascular leakage and edema due to underlying inflammation[24]; (2) local IgE expression or class switching in bronchial mucosa of asthmatic patients[25,26]; and (3) potential trans-epithelial transport of IgE by FcεRII/CD23, similar to the intestinal compartment[27]. In vivo, anti-IgE treatment of an ovalbumin-induced murine model of asthma significantly reduced the smooth muscle mass and extracellular matrix deposition, suggesting an IgE-induced pro-mitogenic effect on ASM cells[28]. Most importantly, the addition of Omalizumab to conventional therapies in asthma patients showed a significant decrease in airway wall thickness[29]; and reduced thickness of RBM and eosinophil infiltration[30]. Therefore, anti-IgE therapy is likely a promising tool in targeting airway remodeling in asthma. 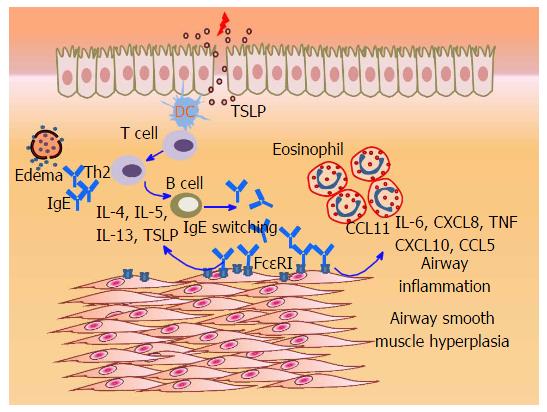 Interestingly, while cross-linking of IgE bound to FcεRI is necessary to cause mast cell and basophil degranulation, compelling evidence from various studies indicate that IgE alone, in the absence of allergen or anti-IgE antibodies, can drive pro-survival effects in mast cells, basophils, and neutrophils, reviewed in[31]. While we and others have already shown that IgE alone can induce ASM proliferation[20,21], it remained unknown whether the pro-mitogenic response of IgE is further enhanced by allergens. Roth et al[32] recently showed that human ASM cells stimulated with serum from patients with allergies (with or without asthma) induced ASM proliferation and deposition of collagens and fibronectin compared to the serum from healthy controls. Very interestingly, however, the addition of allergens did not augment allergic serum-induced ASM cell proliferation. Authors confirmed that the pro-mitogenic effects of allergic serum were specific to IgE since Omalizumab pre-incubation of ASM cells prevented these effects[32]. This is a very important aspect of how IgE sensitizes the airway mucosa without the presence of allergens. Given the early sensitization-induced predisposition to airway remodeling in murine studies[33], and to asthma development in epidemiological studies[19], it is conceivable that early sensitization of ASM may confer a distinctive persistent IgE-mediated hypercontractile ASM phenotype that can arise neonatally and persist into adult life.

Of note, mast cells are known to infiltrate the ASM tissue in asthma[34], and their interaction with ASM is thought to be critical in modulating airway immunopathology in asthma[35]. One may argue that the IgE-induced changes in ASM function may be an indirect effect of mast cell mediators following FcεRI cross-linking on mast cells. However, it does not appear to be the case since: (1) inhibition of Syk, an upstream FcεRI signaling protein, abolished the IgE effects on ASM synthetic and proliferative function[10,13,20]; (2) no detectable contamination of mast cells (tryptase staining) was observed in ASM cell preparations[9]; and (3) inhibition of IgE-induced ASM functions by anti-IgE Omalizumab[11,32]. While the role of mast cells and their secreted mediators such as histamine in regulating ASM function may not be denied, the existing data indicates that IgE clearly can bind to ASM cells via Fc receptors and induce pro-asthmatic changes directly.

In summary, cumulative evidence suggests that the IgE-induced FcεRI activation leads to expression of multiple chemokines and proinflammatory cytokines in ASM which may recruit inflammatory cells and promote allergic airway inflammation. IgE may directly participate in driving Th2 immune response within the airways by inducing TSLP, and IgE may potentially contribute to airway remodeling by directly inducing ASM cell proliferation (Figure 1). Some of the potential questions for future research in this area include: (1) detailed investigation of how IgE gains access in vivo to the sub-epithelial compartment including ASM; (2) what are the mechanisms of IgE “sensitization”vs“cross-linking” modes of FcεRI activation in ASM cells, and whether they are similar to that in mast cells and basophils; (3) what is the relative contribution of FcεRI vs FcεRII/CD23 in determining the outcome of IgE-induced ASM activation; and (4) how IgE acts differentially on ASM vs infiltrating mast cells in vivo?

Overall, clinical and experimental[11,28,32,36,37] evidence suggest that the strategies targeting IgE by anti-IgE have significant benefit in reducing airway wall remodeling. Therefore, a detailed understanding of the molecular events downstream of IgE-FcεRI interaction on ASM cells is needed to advance our knowledge of this pathway for developing better therapeutics in allergic asthma.