Mechanical forces resulting from gravitation seem to be essential for structural adaptation and remodeling of skeletal bones. These forces have the capability of delivering powerfully distorting stimuli to skeletal bones in a very short time, several times a day, in a uniform direction. Facial and jaw bones are not subjected to gravity impact forces. These bones need a mechanism of “compensation” for this deficiency. The goal is achieved by a unique mechanism that substitutes for gravity impact forces - the mechanism of occlusal load transmission to the bone via the periodontal apparatus space. In cases of early loss of teeth and loss of periodontal ligament this mechanism will be missing resulting in premature bone aging.

Core tip: The anatomy and physiology of the periodontal ligament is structured to oppose occlusal forces that impact facial bone in multidirectional vectors. This mechanism is different from the long bones that oppose only vertical forces. Dental implants planning and placement should be compatible with these principles.

The masticatory system is challenged on a daily bases by a variety of high magnitude mechanical forces resulting from occlusal contacts. Occlusal loads are transmitted to jaw and facial bone by a special organ: The periodontal attachment apparatus; root cementum, periodontal fibers, alveolar bone, and gingivae.

In the recent years implantology has revolutionized dentistry and has significantly improving the quality of life of many dental patients. However, in spite of the great successes in patient’s oral rehabilitation, some implant procedures are failing mainly because the basic principles of oral occlusion are not adhered to. The magnitude the occlusal force in the jaws is enormous and their direction and counter balancing are significantly different from the forces applied on the skeletal bones.

The purpose of the present manuscript is to review the literature that is pertinent to the basic principles of occlusal forces in the facial bone compared to the skeletal bone. In a consecutive manuscript (part II) we plan to describe an implant based on these principles and describe cases associated with this technique.

We have used the PubMed website to search for publications with the following key words: Occlusal, forces, balanced, periodontal ligament, jaws skeletal. The search was limited to the English literature and the time frame used was 1900 to present. We have also cited classic text books that are considered to pioneer the field.

The gravity force that affects our skeleton is the result of acceleration of our body against the ground. The outcome of this force over the small area of the feet reveals an intensified stress that is applied to the skeleton. The result is a prominent stress vector (Figure 1) with uniform direction that repeats itself several times a day for short period intervals. The importance of this vector is in the fact that it is turned into a principle stress vector[1]. To negate this force of the bone, trabeculae rearrange along the axis of this vector and build the long bones. The new architecture enables the bone not only to resist compressive stress but also to minimize shear stress according to Mohr’s circle[2]. Compressive stress is a most effective stress for bone remodeling. While this kind of stress activates bone remodeling, it needs a relatively high threshold to become a destructive stress[1]. The more intense the stress, the thicker and closer the trabeculae will become. The most hazardous stress for the bone is shear stress that stimulate bone degradation (law threshold is needed for destruction). Obviously, shear stress demands increased density to protect the bone. Torsion and bending, which comprise shear stresses, cause the bone to protect itself by intensifying bone mineralization density (BMD) and thickening compact bone[1,3]. The greater these stresses, the thicker the compact bone. The impact gravity activities are shown to increase cortical thickness in long bones of athletes[4]. This is done in addition to increasing BMD. Non-impact horizontal activities (like swimming) do not cause thickening of the bone’s cortex and cause a lesser degree of BMD. Most of the actions like walking result in reduction of the risk of hip fractures[5,6]. When these activities are intensified, the risk for hip fractures decreases even more. Non-gravitational activities like swimming do not reduce the chances of hip fractures[5,6]. 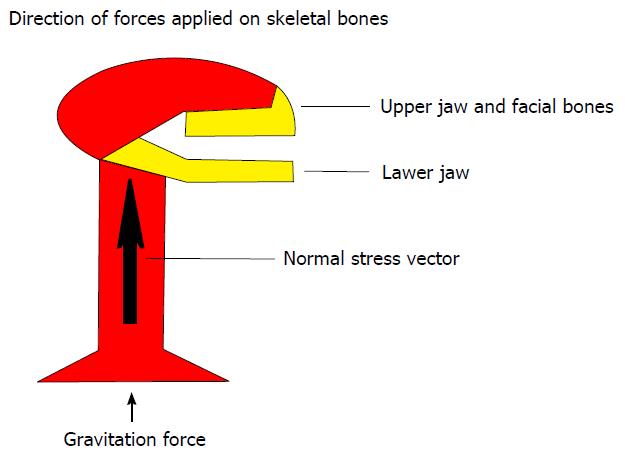 Facial and jaw bones are in an exceptional geographic position, as they are not on the principle stress axis (Figure 1). This group of bones is not prone to gravity collisions and need a substitute to compensate for this deficiency. According to analysis done for occlusal loads, it has been shown that transmission to the alveolar bone occurs via the periodontal ligament space[7]: Occlusal loads are converted into normal compressing vectors all around the root surface of the tooth. These vectors are perpendicular to the root surface (Figure 2) and are equal in their magnitude. Bone distortion is accepted as a result of a spherical stress tensor that compresses the bone all around the root surface. Arrangement of trabecullae during remodeling is done along the principal vectors which in this case are an eigenvector[1]. The result is that the trabecullae are radiating from the root. This arrangement helps in limiting shear stress and turns the alveolar bone into a cushion hammock that absorbs occlusal loads on one side and transmits them in a radiating direction to distal bony structures on the other side. Macro structure of facial bones is constructed in a way that enables maximal strength with minimal mass[3]. According to this principle, facial and jaw bones have air spaces and get their strength from the bone that border them. Impact loads that hit the maxillary tooth will cause deformation not only in the alveolar bone nearby the root, but also in other supra alveolar structures like the orbits, nasal meatuses and the paranasal sinuses, and the partitions in-between them. As maxillary occlusal impact loads may regulate upper jaw facial and forehead bone adaptation, it is done in a dual action; mechanical compression that aims at trabecular bone remodeling and bending or torsion stress that is responsible for remodeling and maintenance of the cortical surfaces[1]. 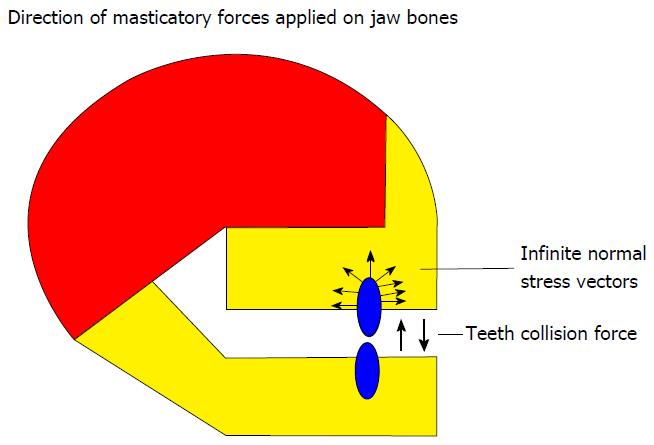 Figure 2 Occlusal loads in the jaw are converted into compressing vectors around the root surface of the tooth.

Mandibular bone, unlike the upper face bones, is a modification of long bone and is more prone to bending and torsions distortion. Therefore, the mandible will express a thicker compact bone. The fact that edentulous mandibles were shown to have thinner cortical bone in contrast to dentulous mandibles support this thesis[8]. In skulls affected by early loss of teeth, facial bones express early aging appearance[9]. According to this theory, the stress tensor that acts directly on the alveolar bone influences also distant bony structures. Early loss of teeth may explain premature aging and deformation of the face because of loss of bone mass. Installation of dental implants is aimed to partially delay facial aging. Dental implants were an obvious outcome of harnessing of orthopedic screws in an attempt to reconstruct artificial dental roots. While orthopedic screws are meant for fixation of bone fractures for at least the period of bone repair, dental implants are intended to permanently replace natural dental roots. Contemporary implants are aimed mainly for retention and stabilization of the bone, and osseous integration is used to substitute for attachment by periodontal ligament (PDL).

Dental implants transmit stress to bone by a stress tensor that includes compressive but also shear stress vectors. Obviously the suggested mechanism of the PDL apparatus does not exist and implants are prone to shear stress and bone degradation. This is supported by clinical observations and retrospective studies that demonstrate bone loss along dental implants during the years[10-12]. Bone degeneration and perimplantitis around dental implants is reported to be up to 28% of the cases. Furthermore, the older the implant, the greater the rate of bone absorption.

Nevertheless, dental implants have a high rate of survival and are usually the better solution for reconstruction of missing teeth. It is suggested that in cases of plastic facial rejuvenation, attention would be directed to occlusion rehabilitation before any procedure is done in an attempt to achieve more efficient and long lasting results.

Impact forces are essential for mechanical bone adaptation and for achieving bone strength. The impact gravity loads serve the goal of strengthening skeleton bones. Impact occlusal loads are suggested to serve the same aim for facial and jaw bones. The impact of occlusal forces depends on their magnitude, frequency, and direction.

The result is a clear strain vector signal that leads to forming bone cells. Dental implants lack the ability to compress purely nearby bone; they serve merely to preserve reservation facial bone.