Core tip: Pulmonary complications after transcatheter arterial chemoembolization (TACE) for hepatocellular carcinoma (HCC) are thought to be related to chemical injury caused by the infused ethiodized oil or chemotherapeutic agent, which can migrate to the lung vasculature via arteriovenous (AV) shunts associated with the hyper-vascular HCC. The risk factors associated with post-TACE pulmonary complications include large hyper-vascular HCC, AV shunts, large volume of Lipiodol, and embolization via the right inferior phrenic artery. However, the absence of known risk factors is not a guarantee against serious complications. Careful monitoring of patients perioperatively and an awareness of the potential post-TACE pulmonary complications should expedite early recognition and effective management of these patients. 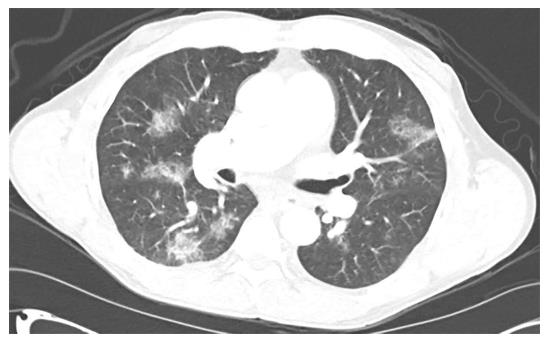 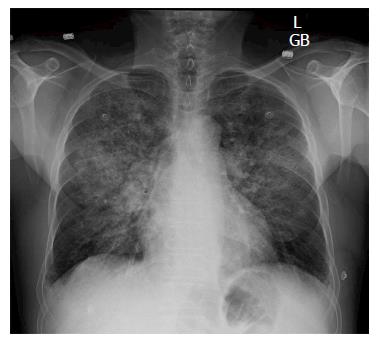 HCC, the most common primary hepatic malignancy, is a leading cause of cancer-related death in the world. It is expected that the incidence of HCC will continue to rise in the setting of maturation of existing hepatitis B and hepatitis C infections and the rising incidence of nonalcoholic steatohepatitis[2,3]. The treatment options for HCC include tumor resection; tumor ablation with radiofrequency, microwave, or ethanol; TACE; transarterial radioembolization; systemic small-molecule inhibitor therapy such as sorafenib; and liver transplantation. The treatment goal is either curative or palliative; however, many patients are not eligible for curative therapies, e.g., surgical resection and liver transplantation. TACE is a widely accepted palliative intervention and bridging therapy for selected patients with unresectable HCC, especially in patients awaiting liver transplantation, in whom it delays tumor growth or may even downstage HCC[4-9]. TACE improves survival in patients with unresectable HCC who have preserved liver function and no extrahepatic or vascular spread of tumor[10-12].

The rationale for TACE is based on the observation that HCC is predominantly supplied by hepatic arterial blood. In contrast, normal liver tissue is fed by the portal vein system predominantly and less so by the hepatic arterial system. The late Judah Folkman (1933-2008) crystallized the concept of angiogenesis involved during tumor growth. Hepatic tumoricentric arterialization is a multistep process that promotes a shift from venous blood supply toward arterial blood supply to tumors[13,14]. Drug delivery via the hepatic artery results in higher intratumoral drug concentration when compared to portal vein delivery[15], allowing TACE to be a tumor-selective intervention that spares normal hepatic tissue. Tumor regression was first demonstrated by hepatic artery ligation in 1966[16]. Two controlled, randomized studies and a meta-analysis in 2002 demonstrated a significant survival benefit for TACE, leading to its subsequent widespread use[10-12].

There are currently two accepted TACE techniques: Conventional TACE with an emulsion of Lipiodol-chemotherapeutic agent or DEB-TACE loaded with a chemotherapeutic agent such as doxorubicin. Lipiodol, an iodized poppy seed oil, accumulates selectively in the tumor and its neovasculature, causing a transient embolization of the HCC. The DEB come in multiple sizes, ranging from 100-300 μm to as large as 900 μm. While both conventional TACE and DEB-TACE have been shown to achieve comparable HCC tumor necrosis[17], doxorubicin DEB-TACE appears to be a relatively more effective and safe therapeutic modality for HCC when compared to conventional Lipiodol-based TACE[8,18-25]. However, TACE is not without risks. TACE can cause a post-embolization syndrome, a self-limited constellation of symptoms most notable for fever, malaise, severe nausea and vomiting, and pain in the right upper abdominal quadrant[26]. Some of the other known, but less frequent, complications related to TACE include hepatic artery injury, hepatic abscess and biloma, bacteremia and sepsis, biliary stricture, gallbladder ischemia, hepatic failure, variceal bleeding, renal failure, and pulmonary embolism[27]. Fatal pulmonary complications have been reported with smaller Tris-acryl gelatin microspheres (40 to 120 μm range)[28].

Pulmonary complications after TACE can range from mild dyspnea and mild hypoxia to ALI/ARDS and, at times, death. Post-TACE pulmonary oil embolism is a rare pulmonary complication of TACE. The current thought is that the injected oil migrates to the pulmonary vasculature via AV shunts within the hyper-vascular HCC, resulting in chemical injury that is further aggravated by the inflammatory response. Early studies with 131I-labeled Lipiodol showed that, when delivered to the hepatic artery of patients with hepatic cancer, Lipiodol predominantly concentrated in the liver, but also was detected in the lungs to a much lesser extent[29,30]. Pulmonary inflammatory reaction with bronchial pneumonia or hemorrhagic foci as a result of pulmonary oil embolism was observed in beagles infused with Lipiodol in the proper hepatic arteries[31]. In a rabbit model of ALI from ethiodized oil, hypoxia occurred early, within 24 h post exposure, followed by severe hypoxemia and extensive alveolar and interstitial inflammation, hemorrhage, and edema on days 2 to 4 after intravenous Lipiodol injection[32].

Conventional Lipiodol-based TACE and DEB-TACE both utilize chemotherapeutic agents, with doxorubicin being most commonly used, to achieve optimal therapeutic effects in HCC. Doxorubicin is an anthracycline chemotherapeutic antibiotic that inhibits DNA topoisomerase II. Classically associated with cardiotoxicity, the adverse effect of systemic doxorubicin on the lungs is a very rare occurrence[33]. However, perfusion of the lungs of healthy male foxhounds with doxorubicin caused dose-dependent damage to the pulmonary tissue[34]. Doxorubicin was reported to cause capillary leak syndrome in an adult patient and was observed to potentiate radiation pneumonitis in two pediatric patients[35,36]. Doxorubicin has also been associated with bronchiolitis obliterans organizing pneumonia[37,38]. Pegylated-liposomal doxorubicin (Doxil™) is a less toxic formulation. However, even Doxil™ caused transient and mild dyspnea, with transient relative neutropenia in patients within 1 to 5 min after infusion; symptoms resolved within 5 to 15 min after cessation of infusion[38,39]. Based on in vitro data, Skubitz et al[39] proposed that Doxil™-induced dyspnea was secondary to the transient adhesion of neutrophils in the pulmonary circulation, causing a decrease in pulmonary compliance. Taken together, Lipiodol and doxorubicin can each cause pulmonary tissue damage, and can potentially synergize and potentiate lung injury when used together in patients with HCC.

Pulmonary oil embolism complication rates in studies of patients with hepatic tumors undergoing TACE are summarized in Table 1. Post-TACE pulmonary complications have included pulmonary oil embolism, interstitial pneumonitis, chemical pneumonitis, ALI/ARDS, lipoid pneumonia, acute eosinophilic and neutrophilic pneumonia, bilious pleuritis, pulmonary abscess, pulmonary tumor embolism, and possibly pulmonary metastasis with HCC (Table 2). Proposed risk factors for developing pulmonary Lipiodol embolism include liver tumor larger than 10 cm and large Lipiodol volume of greater than 20 mL[40]. Multivariate logistic regression analysis revealed that Lipiodol dose appeared to be the primary risk factor for the development of pulmonary oil embolism[41]. Whereas the maximum safe Lipiodol dose was proposed by Chung et al[42] to be 15 to 20 mL, or approximately 0.25 mL/kg total body weight, Wu et al[41] reported that doses above 14.5 mL were associated with an increased risk for the development of pulmonary oil embolism, based on an ROC curve analysis that showed a sensitivity of 80% and a specificity of 66.3%[41,42]. Lin et al[43] reported a positive correlation (r = 0.78, P = 0.013) between Lipiodol volume and the duration of patient recovery, which was thought to be a surrogate indicator of lung injury severity.

Post-TACE complications are increased when the right inferior phrenic artery (RIPA) is accessed for chemoembolization. Following chemoembolization via the RIPA, CT imaging showed a radiographic pulmonary complication rate of 70.5% (31 of the 44 patients): Lipiodol accumulation in the lungs in 23 patients, pulmonary consolidation in 30 patients, and pleural effusion in 18 patients[44]. Two of the 44 patients in that study developed clinical symptoms of acute dyspnea or hemoptysis. The majority of these patients, however, were reportedly asymptomatic despite the reported radiographic findings. Sakamoto et al[45] indicated a concern for a RIPA-pulmonary vasculature shunt contributing to the migration of Lipiodol or chemotherapeutic agent to the lung tissue causing ALI during TACE. This concern has been similarly shared by Bilbao et al[46] and Clark[27]. Hatamaru et al[47] reported a fatal pulmonary complication associated with TACE for HCC involving the RIPA, which was shown angiographically to contain an AV shunt.

The lungs are the most frequent sites of metastasis for HCC[48]. The prognosis of HCC patients who also have extrahepatic metastases is generally poor[48,49]. In the Uka et al[48] study of 995 consecutive patients with HCC, 151 (15.2%) patients had extrahepatic metastasis; 71 of these 151 patients (47%) had metastasis to the lungs. In a study of 230 HCC patients, Liou et al[49] reported increased pulmonary metastasis, 40 out of 156 patients (25.6%) vs 6 out of 74 patients (8.1%), in patients who underwent TACE with Lipiodol mixed with antineoplastic agents vs patients without TACE, respectively. The resulting assumption is TACE-induced tumor embolization as a means for metastasis to pulmonary tissue. Presumptive TACE-mediated lung metastasis was associated with: Solitary HCC larger than 10 cm, several to many tumors with the main one being larger than 5 cm or diffuse HCC, intrahepatic portal vein thrombosis, AV or arterioportal shunts, and the presence of incomplete HCC tumor necrosis after TACE[49]. In support of the observation by Liou et al[49], Liu et al[50] demonstrated in a human orthotopic HCC nude mouse model that occlusion of the hepatic artery resulted in tumor growth inhibition; however, there was increased potential for tumor invasion and distant metastases via a process that was associated with intratumoral hypoxia and epithelial-mesenchymal transition. In contrast, Lin et al[51] reported that transcatheter arterial embolization failed to increase the risk of pulmonary metastasis in a study of 287 patients. Further studies are necessary to determine the potential role of HCC arterial embolization in the development of lung metastasis.

The management of ALI/ARDS includes supportive care, oxygenation, and lung protective ventilation[52,53]. The management of post-TACE ALI/ARDS due to pulmonary oil embolism has been largely based on experience with the management of fat embolism syndrome[54,55]. The inflammatory response and oxidative stress involved in ARDS and chemical pneumonitis induced by Lipiodol and doxorubicin serve as the basis for intravenous steroidal treatments[56]. Successful steroid therapy has been demonstrated in several cases of post-TACE ALI/ARDS[1,43,57,58], however, treatment effectiveness remains to be demonstrated.

Post-TACE pulmonary complications in HCC patients are rare, occurring at 0.05% to 2.3% in most studies. Risk factors appear to be related to the presence of AV shunts, large hyper-vascular HCC, high volume of Lipiodol, and infusion via the RIPA. Careful evaluation of the patient’s overall health status, HCC characteristics and tumor vascularity minimizes the complication rate. However, the absence of known risk factors is not a guarantee against serious complications, as evidenced by our patient’s post-TACE ALI. Careful monitoring of the patient in the perioperative period and an astute awareness of the potential post-TACE pulmonary complications should expedite early recognition and prompt management to increase potential for good recovery in these patients.

We thank the Scripps physicians and house staff involved in the expert care of this patient. We thank Laura Nicholson, MD, PhD of the STSI for her critical review of the manuscript.