Lung cancer is the leading cause of death globally, besides recent advances in its management; it maintains a low 5-year survival rate of 15%. The discovery of epidermal growth factor receptor (EGFR) activating mutations and the introduction of its tyrosine kinase inhibitors (TKIs) have expanded the treatment options for patients with non-small cell lung cancer. Nowadays, EGFR mutation testing is now a common routine for newly diagnosed lung cancer. First generation TKIs developed, erlotinib and gefitinib, were reversible ones. After a median of 14 mo, eventually all EGFR mutated patients develop resistance to reversible TKIs. Afatinib, dacomitinib and neratinib, second generation inhibitors, are selective and irreversible TKIs. Finally, third generation phase I clinical trials were performed, with lower toxicity profiles, and targeting with more precision the driving clone of this heterogeneous disease.

Core tip: Dramatic changes have occurred in the last decades, concerning the treatment of lung cancer. The knowledge of clinical, pathological and molecular pathways has allowed sub-classifying non-small cell lung cancer (NSCLC), to a point where it has never been reached. The determination of activating mutations of epidermal growth factor receptor (EGFR) has permitted the use of EGFR tyrosine kinase inhibitors (TKIs), such as erlotinib and gefitinib in first, second and maintenance setting. However, acquired resistance develops at some stage of the disease, and second generation TKIs have been developed, but with similar results to traditional chemotherapy. With the arrival of third generation TKIs, a selective target mutational personalized therapy has accomplished better response rates, with a lower toxicity profile in phase I clinical trials. The question is should NSCLC patients with exon 19del and L858R point mutation in exon 21 be treated differently, once the driver oncogene is known? On the other hand, if patients with acquired resistance with EGFR T790M, should they also be treated targeting this predominant clone?

The leading cause of death from cancer disease worldwide, is lung cancer with a survival rate of 15% at 5 years[1]. In the European Union lung cancer is responsible in men for 187300 predicted number of deaths in 2014 and in women for 84500 predicted number of deaths in 2014[2]. This numerical evolution since 2009 may be justified by the increase of aging and population growth consequently. Lung cancer during the last three decades, in men reached a peak in the 1980’s and has progressively fallen in the last years. On the other hand women have been rising during the same period (Figure 1).

Non-small cell lung cancer (NSCLC) is the most common type of lung cancer (approximately 80%)[3]. The vast majority of NSCLC, approximately 65%, present with locally advanced or metastatic disease, where local regional therapy isn’t an option. Until 1990’s, treatment with a scheme based on a platinium combination with a 3rd generation agent (paclitaxel, gemcitabine, docetaxel or vinorelbine). Treatment of NSCLC improved with an overall survival (OS) of about 8 mo[4]. It was only in 2008, that Scagliotti confirmed the superiority of cisplatin and pemetrexed scheme for the non-squamous type of NSCLC[5].

With the discovery in 2004 of certain activating mutations in the epidermal growth factor receptor (EGFR) tyrosine kinase domain, subsequent introduction of EGFR tyrosine kinase inhibitors (TKIs) in advanced NSCLC, allowed a further increase in therapeutic options for NSCLC. Consequently, a precise selection of a specific clone of patients who were more likely to have response[6,7]. The higher incidence of mutations occurs in a selected population with special characteristics: Most common in Asian population, women, non-smokers and adenocarcinomas. Nevertheless, there is no evidence of clinical characteristics which can upfront indicate the status if this gene, and for this main reason all patients should be evaluated for their mutational status before initiating therapy. These mutations are found in 10% to 15% of metastatic NSCLC tumors[8]. Many studies have shown that EGFR-TKIs, when compared to standard chemotherapy, namely cisplatin-based doublets, improve the progression free survival (PFS) and the response rate (RR) in naïve EGFR mutated NSCLC patients (Table 1)[9-13].

Understanding the corne stone of the mechanism of resistance of EGFR-TKIs of first generation (gefitinib and erlotinib) permits us comprehend the new generations EGFR-TKIs.

Tyrosine kinase receptors are the intracellular surface of some transmembrane proteins, which are responsible for controlling the signaling pathways which enhances proliferation, growth, differentiation and cellular migration[14]. EGFR (HER1/ErbB1), HER2 (ErbB2), HER3 (ErbB3) and the HER4 (ErbB4) are the members of the ErbB family. They are composed by an intracellular and an extracellular domain. The binding of a growth factor in the extracellular domain, promotes receptor dimerization and subsequent activation, which leads to the initiation of the intracellular cascade[15]. When we face tumors with activated EGFR mutations, they become totally dependent of this activation loop to initiate the intracellular cascade. On the other hand, when they are blocked by EGFR TKIs, the cells become unable to proliferate and begin apoptosis.

A whole range of mutations can occur in the DNA that encodes the EGFR Kinase, between exons 18 and 24. The most common or classical mutations are in frame deletion of exon 19 or L858R point mutation in exon 21[16,17]. These common mutations showed benefit in terms of RR, PFS and OS (74.0%, 8.5 and 19.6 mo respectively). They occur in approximately 90% of the EGFR mutated patients and are predictive of response to EGFR-TKI treatment[18]. However, in the Caucasian population they are only present in 10% and in 30% to 40% of the Asian population with NSCLC[19].

Erlotinib and gefitinib are first generation reversible TKIs, where an objective RR of 50% to 70%, has been observed in many studies[9,12,13]. In fact, when patient’s treatment is selected based on EGFR mutational status and treated with TKIs in first line, significant benefit is acquired in relation to RR and PFS. Concerning, OS no benefit was accomplished (Table 1). Approximately 30% of EGFR mutant patients do not respond due to primary resistance and this mechanism is poorly understood[18]. There is also no clear benefit in uncommon mutations. However, progressive disease develops within 9 to 13 mo, with the acquisition of resistance to inhibitors of EGFR tyrosine kinase of first generation (acquired resistance)[9,12,13]. New weapons are required to overcome these obstacles and second generation TKIs were developed.

Afatinib, dacomitinib and neratinib are the second generation, irreversible or co-valent EGFR inhibitors. They are pan-Erb B inhibitors and active against EGFR mutations and Thr790Met mutation (where methionine replaces threonine), but they also inhibit wild-type EGFR.

The mechanism of acquired resistance to TKI is the greatest limitation to obtain the treatment benefit of first generation TKIs. The pathways that allow cells to escape TKIs inhibition are many, but the most important is configurational change of the ligation of the TKI. The most common one is the EGFR T790M which occurs in 50%-60% cases of acquired resistance. There are theories which consider that the most common clones were destroyed by 1st generation TKIs, and that EGFRT790M mutations might already exist from the beginning in an undetectable way, and now be considered the predominant clone, or if it is in fact, a new mutation (Figure 2)[22]. 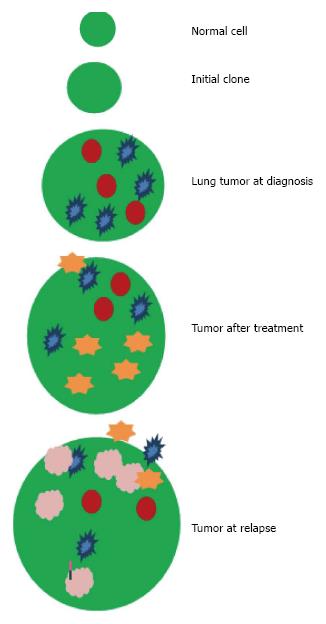 Although afatinib and dacomitinib have shown efficacy in pre-clinical models, they are associated with RR less than 10% and PFS less than 4 mo in patients who had received previously erlotinib or gefitinib. The speculated reasons by many authors, is based on the theory that either afatinib or dacomitinib can’t inhibit EGFRT790M in an effective dosage[23-26].

Concerning afatinib, one must not forget the studies in naïve adenocarcinoma EGFR mutated patients which were randomizes in first line to afatinib vs chemotherapy in LUX-LUNG 3 and 6 studies[27], where survival and RR was improved in the TKI arm. A statistical significant outcome in OS was also found in the del 19 mutation sub-group. However, toxic effects of second generation such as skin rash and gastrointestinal toxic effects mustn’t be neglected. Treatment options after failure of EGFR-TKI are limited to traditional chemotherapy or best supportive care.

Three studies (AZD9291, CO-1686, HM61713)[19,28,29] with different EGFR-TKIs were developed and studied in phase I clinical trials. These new three target therapy, third generation TKIs, are oral selective TKIs, active against the common EGFR mutations as previously mentioned, as well as the resistant EGFRT790M. They included patients with NSCLC with EGFR mutations, already treated with EGFR-TKI, who had progressive disease after 1st generation EGFR-TKIs.

Osimertinib (AZD9291)[19] has anti-tumor activity against EGFR L858R tumors, similar to afatinib, but was more effective and simultaneously also active against tumors with T790M. This may suggest that AZD9291 is more effective in targeting EGFR mutations in NSCLC which have developed T790M mediated resistance to EGFR inhibitors. Recent data have shown that AZD9291 is effective in first line setting for EGFR mutated NSCLC with a PFS of 81% at 9 mo[30].

Rociletinib (CO-1686)[28] is an oral, mutant-selective covalent inhibitor, which acts on EGFR most common mutations such as: Exon 19 deletions, L858R and T790M, but not in exon 20 insertions. It is only minimally active in EGFR wild-type.

HM61713[29] is an oral selective inhibitor of EGFR mutations and EGFRT790M. It has low activity also in EGFR wild-type. Most common adverse effects were grade 1 and 2 (Table 3).

Third generation EGFR inhibitors are selective drugs that are active against ERGFR mutations, sparing wild-type EGFR, and as a consequence have less toxicity, as they are targeting selectively EGFR mutations. In opposition to second generation, namely afatinib, were toxicity grade 3 diarrhea and skin rash occurred in 14% and 16% respectively, but were better tolerated than chemotherapy[18]. The 3rd generation TKIs demonstrated an excellent activity and good tolerance when the TKIs resistance is associated to EGFRT790M. Nevertheless, further studies are required to strengthen these results.

Another critical issue, concerns the toxicity profile of irreversible TKIs and also the quality of life of our patients, which remains one of the most important goals in lung cancer patients, especially in second or third line treatments.

The progressive elucidation of molecular pathogenesis of cancer has enabled the development of targeted personalized therapies. However, this occurs because as certain pathways are being blocked, tumors find different “motorways” to reach the same end: Growth, proliferation and migration.

In fact, this must be treated not as a static disease but as a dynamic one, where green signs open and the motorway is free to travel (proliferation), as an alternative to red signs that have blocked this passage, leading to apoptosis. Cancer is in fact a clonal disease, where predominate cells survive depending on which traffic light is on or off. It’s up to physicians to investigate, namely by re-biopsying these tumors or using liquid biopsy for circulating tumor DNA[31], when we withstand progression or acquired resistance to a certain therapy, being it classical chemotherapy or small molecules, to determine the driving clone (Figure 1).