A 58- year-old man, who had right sided nasal obstruction, used stents during sporting activities intermittently for four years and subsequently in addition to intermittent sports use regularly for sleep for another two years. Magnetic resonance imaging (MRI) of the nasal passages and rhinomanometric measurements were taken with and without stents in situ. The stents tested are all braided from thin nitinol wires. The AlaxoLito Nasal Stent has a length of 35 mm. The AlaxoLito Plus and AlaxoLito Xtreme Nasal Stents have a length of 60 mm. Both have a diameter of about 10 mm in unloaded state and comprise a widened, ball-shaped section (which is positioned at the nasal alar) of about 11 and 14 mm, respectively. Rhinomanometric nasal airflow after application of the stents improved 1.11, 1.23, and 1.38 fold, respectively, with application of the AlaxoLito, AlaxoLito Plus and AlaxoLito Xtreme stents. MRI showed that after application of the stents, the nasal passage increased in diameter.

Intranasal stenting shows improvement in nasal airflow. Intermittent and regular longterm use had been shown to be safe, with no discomfort and no side effects.

Nasopharyngeal stenting, which splints open the velopharynx, has been used to treat sleep disordered breathing[2], and plays a role in surgical planning for Obstructive Sleep Apnoea (OSA)[3,4]. Previous studies of nasopharyngeal stenting devices have shown reduced snoring and OSA as evidenced by an improvement in audiometric data and the apnoea-hypopnoea index during sleep[5]. These devices however, are not designed to splint the nasal airway and to improve the nasal breathing. 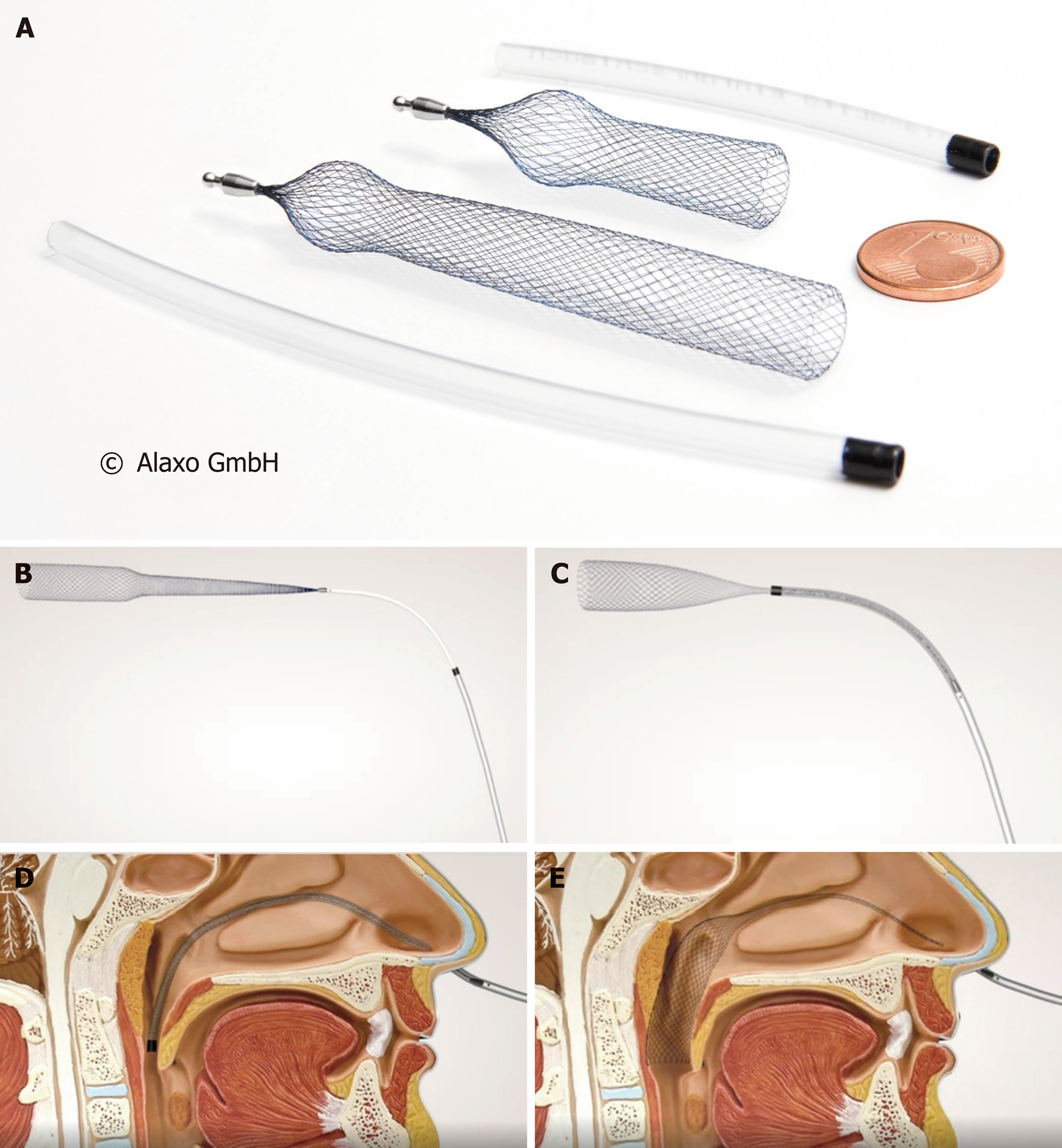 A 58 years old healthy male volunteer enrolled into clinical testing for the use of three intranasal stents (AlaxoLito, AlaxoLito Plus and AlaxoLito Xtreme). The patient had a previous tonsillectomy, and no other significant past medical history. Symptomatically he had mild right sided nasal obstruction. On clinical examination, he had a mildly deviated nasal septum to the right. Anterior rhinomanometry (Flowhandy ZAN 100 USB, ZAN Meßgeräte GmbH, Oberthulba, Germany; flow at 150 mbar pressure difference) showed a baseline of 370L/min on the right and 380L/min on the left nasal passage.

The subject applied the intranasal stents for a total of 6 years, starting in 2012. All stents always have been inserted into the middle nasal passage. The application of these stents was performed by the subject themselves. The stents have an insertion tube which facilitates insertion, which is removed after the stents are in a comfortable position. For the first four years, the subject applied the stents only during exercise and sporting activities, AlaxoLito Plus on the left nasal passage and AlaxoLito on the right nasal passage, due to the mild septal deviation. The AlaxoLito positioned just in front of the septum deviation. After regular nightly use of these stents for determination of the effects during sleep from May 2016 on, after two weeks the subject noticed he could insert the longer AlaxoLito Plus stent also on the right side, initially only in the morning, and after about two months around the clock, and without pain. Since then, the subject used the AlaxoLito Plus on both sides. In May 2018 the subject started using a new stronger variant of the AlaxoLito Plus (the AlaxoLito Xtreme) on both sides.

OUTCOME AND FOLLOW-UP
Effects on rhinomanometry

Nasal rhinomanometry was performed without and with the application of the three stent types. Mean measurements were taken to account for the nasal cycle. The results are shown in Figure 2. An increase in nasal airflow from 751 L/min to 832 L/min was observed with AlaxoLito stent. A further increase to 925 L/min and 1036 L/min, respectively, was measured with the application of the AlaxoLito Plus and AlaxoLito Xtreme stents. The subject reported that inspiration was hampered by the olive of the rhinomanometry system starting with the AlaxoLito Plus and the more for the AlaxoLito Xtreme, due to a reduced diameter of the possible air inflow into the nasal valve. Thus, the real values and factors of increase seem to be higher than measured. 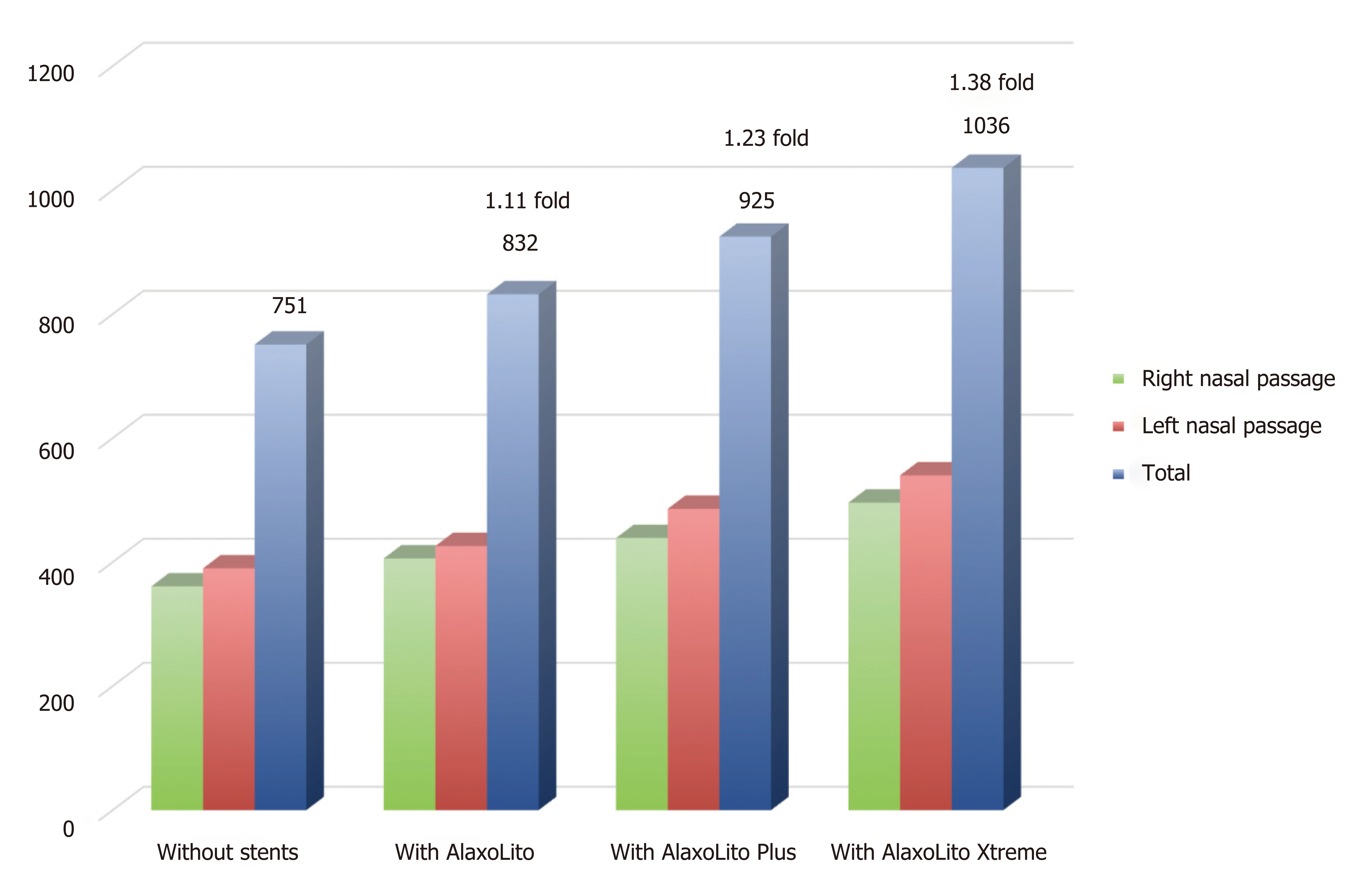 Figure 2 Rhinomanometric data without and with stents.

Ten horizontal and vertical points of measurements of the nasal airway were taken in the coronal plane, and the mean of these calculated. Using this method, an increase in the diameter of the middle nasal airway of 1mm was seen from 2015 to 2017 without the nasal stents in situ, and of 2.3 mm with the AlaxoLito Plus in situ. The strongest widening occurred at the position of the septum deviation in the right nasal passage with 4.1 mm. With the AlaxoLito Xtreme additional widening and an almost round shape of the air canal was observed.

Multiple magnetic resonance imaging (MRI) studies were performed. Figure 3 shows a comparison of coronal MRI of the nasal passages prior to regular nightly use of the stents (December 2015) and with about 1 year post regular AlaxoLito Plus stent application (June 2017). A clear improvement by widening of the nasal airway post regular stent usage is seen on the MRI, especially on the right side, as evidenced by the increase in the black area of the middle nasal passage representing the air canal provided by the stent (red arrows). A comparative MRI was performed with the stents in situ. The yellow arrows show a compression effect they have on the middle turbinates. Further, a certain reduction by rounding of the probably cartilaginous structure of the septum deviation is observable (red arrows).

Figure 3 Comparison of coronal magnetic resonance imaging of nasal passages prior to and 1 year post regular stent use. A: Magnetic resonance imaging (MRI) from December 2015 prior to regular use of stents, without stents; B and C: MRI from June 2017 one year post regular use of AlaxoLito Plus stent (B: without stents in situ; C: with AlaxoLito Plus in situ). 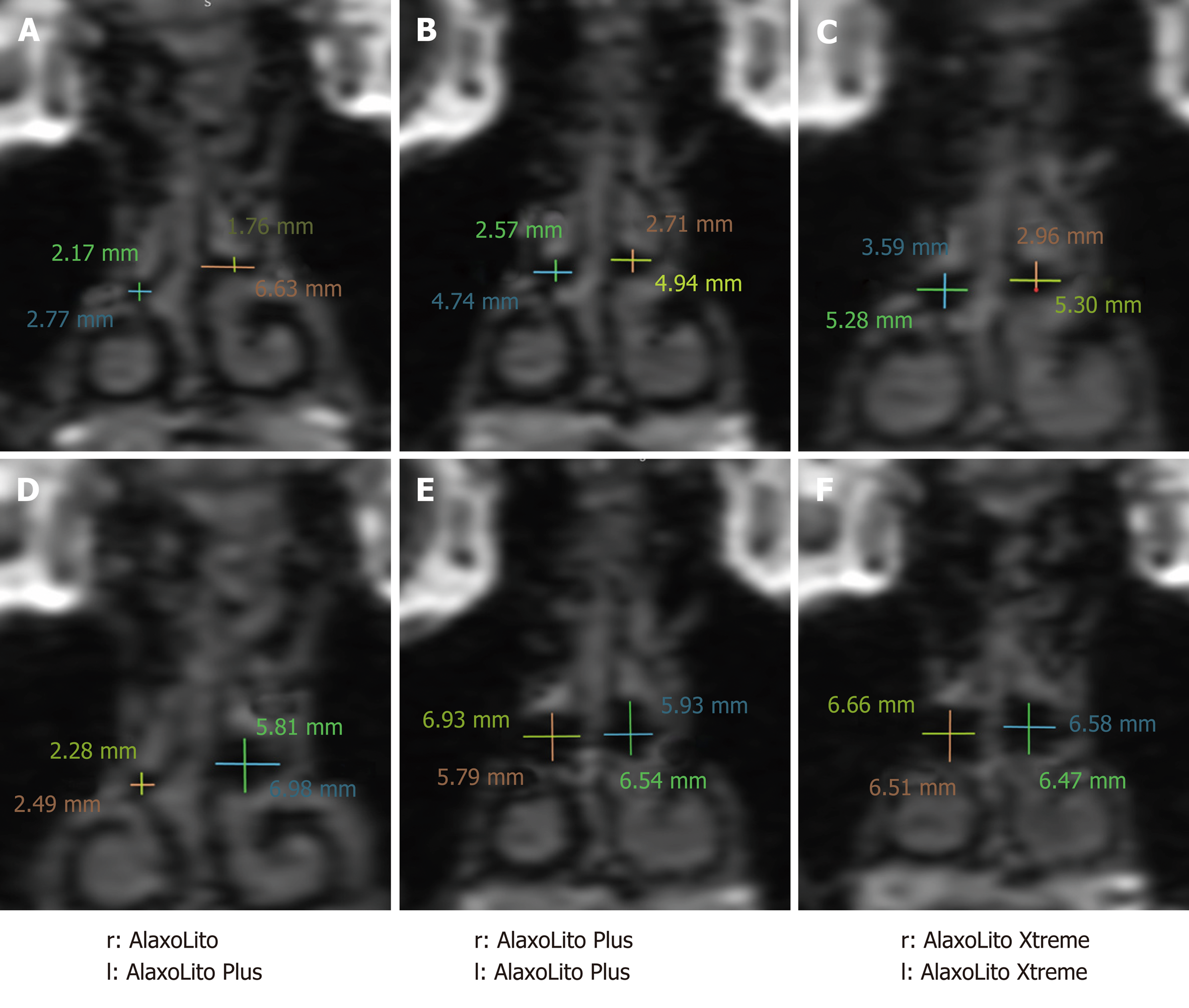 In Figure 5 axial and sagittal planes in MRI are shown for September 2018 with the AlaxoLito Xtreme stents in situ. It is evident that the stents create a rather consistent airway of about 6.5 mm diameter. 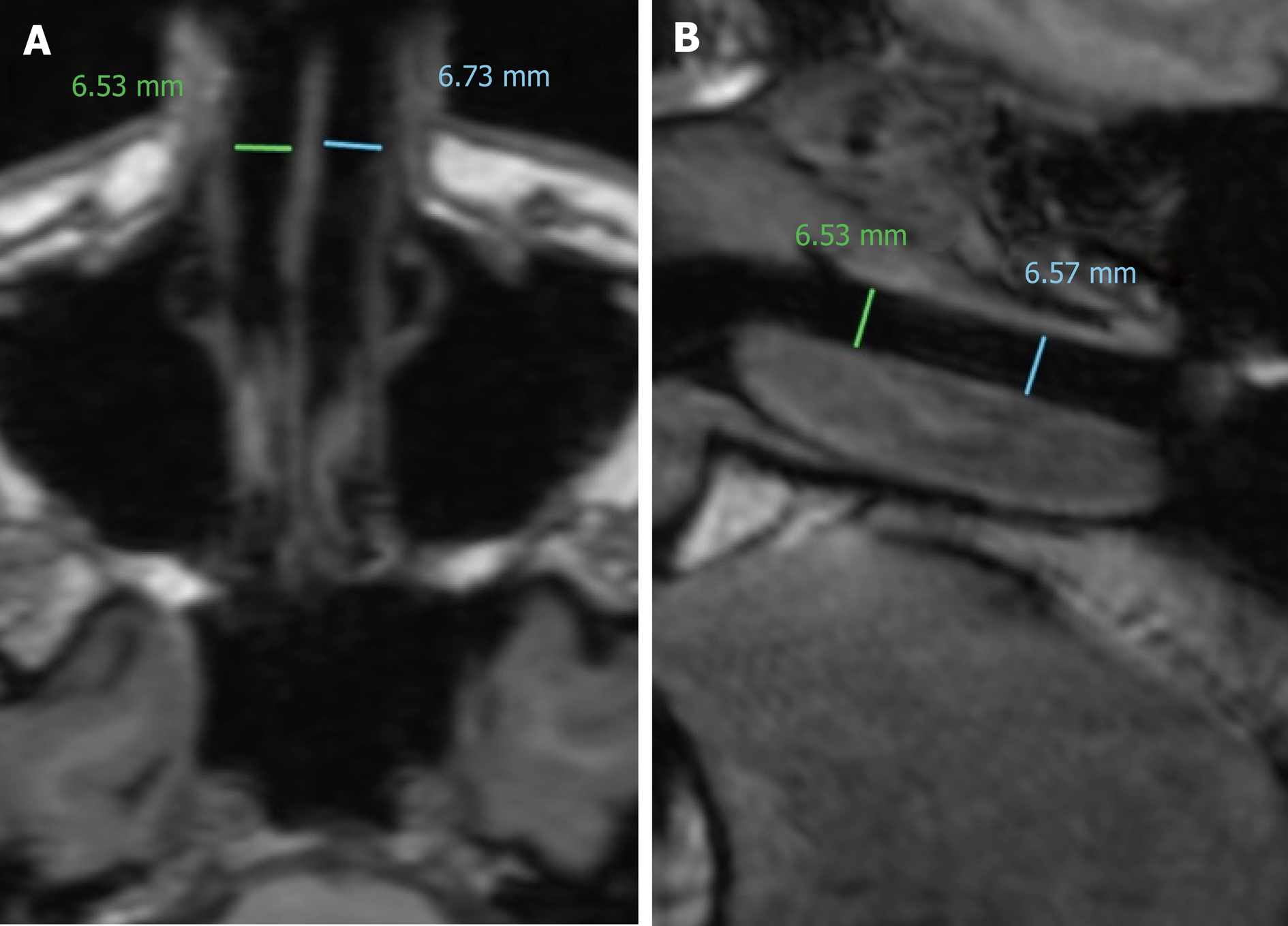 Figure 5 Axial (A) and sagittal (B) magnetic resonance imaging (from September 2018) showing measurements of middle nasal passage with AlaxoLito Xtreme stents in situ.

Although nasopharyngeal airway tubes have been used by both anaesthesiologists and otolaryngologists to treat upper airway obstruction at the level of the velopharynx, the treatment of nasal airway obstruction using stenting devices has limited prior research.

Rhinomanometric measurement results improved stepwise with application of AlaxoLito to AlaxoLito Plus to AlaxoLito Xtreme. The longer AlaxoLito Plus stent was initially not insertable on the right side, where the patient had mild obstruction secondary to septal deviation, as the 4 mm diameter insertion tube could not pass the narrow position at the septum deviation, instead causing pain on the septum mucosa. The intermittent and irregular use of the shorter AlaxoLito mainly during sports, each time for some hours, over four years did not change this situation. However, after regular nightly use of the AlaxoLito stent for two weeks, the patient was able to insert the longer AlaxoLito Plus on the right side without pain and discomfort, indicating there may be cumulative effects on opening the nasal airway by regular nightly application for about 8 h per night. Initially this effect lasted for 2 to 3 h only. After about 2 mo this effect lasted around the clock so that the longer AlaxoLito Plus could be inserted also in the evening before sleep and was used regularly since then.

The use of the stronger version (the AlaxoLito Xtreme) again within 2 to 3 mo led to a further widening of the middle nasal airway at the position of the septum deviation. Although there was no resolution of the septal deviation, the nasal airway on the narrow side improved with measurements on MRI. This suggests that a period of about 2-3 mo of use is necessary to achieve the permanent widening effects which are visible in the MRI. All MRI studies have been performed in the evening, that means at least 10 h or more after removal of the stents from the nose in the morning.

An increase of the diameter of the middle nasal passage of 1 mm without stents and 2.3 mm with stents in situ was observed after one year of regular use of the AlaxoLito Plus stent spanning across this septum deviation position. 5.5 to 6.5 mm hydraulic diameter is considered to be the normal range of the nasal passage for good nasal breathing[8]. With the stents an almost ideal tube has been reached, so that the hydraulic tube diameter values should be directly applicable for comparison.

This is the first case report to examine the effects of intranasal stents in the treatment of nasal obstruction, using rhinomanometric data and MRI. Clear improvement in the nasal airway is shown on MRI, both with the stent in situ, and after regular nightly use of the stent for one year in the first step (AlaxoLito Plus) and 2-3 mo in the second step (AlaxoLito Xtreme). Further imaging and rhinomanometric data would be helpful after the patient ceases stent use, to analyse whether the stents have a longterm lasting effect on the nasal airway.

Although the patient reported subjective improvement in sleep quality, however more objective data would be needed to quantify this. Occasional cell phone app recordings (SnoreLab) indicated almost complete abolishment of occasional weak snoring finally with the AlaxoLito Xtreme. However, the authors did not systematically study the effect of these intranasal stents on snoring or sleep apnoea, and further studies would be warranted to study their effects on sleep.