Hydatidosis is a cosmopolitan anthropozoonose common to humans and many mammals. The cervical localization is rare even in endemic countries. We report a case of cervical hydatidosis located in the infra-thyroidian region. The diagnosis was suspected on clinical and radiological examinations (Ultrasonography, computed tomography-scan). The surgical removal of the cyst was difficult because of the inflammatory tissue around the mass. The confirmation of the diagnosis was obtained by the histopathological examination. During the follow-up, a local recurrence of the disease was diagnosed after 9 mo treated successfully by surgery.

Core tip: Cervical hydatidosis is a rare clinical form of the anthropozoonose. The clinical presentation is nonspecific and may be diagnosed only after locoregional complications which can be life-threatening. This paper describes and discusses the clinical and therapeutic features of this disease. Imaging allows an adequate characterization of the mass and helps to planify the surgical approach. The prognosis is generally good provided regular and careful follow-up.

Hydatidosis is a parasitic disease caused by the development in humans of the larval form of Taenia Echinococcus. It occurs predominantly in rural regions characterized by a significant development of sheep farming and humid climate favoring the survival of parasite eggs[1]. The cervical localization is rare even in endemic countries[1,2].

A 53-year-old woman, with a history of hypertension and depressive syndrome, presented with a cervical mass appeared one year ago, slowly growing, without pain, fever or weight loss. Neither rural origin nor contact with dogs has been reported. Physical examination found a 55 mm × 30 mm swelling located at the base of the neck. The mass was painless, mobile with no local inflammatory response or spasm of cervical muscles. Laboratory tests did not found an inflammatory syndrome and the chest X-ray was normal. Ultrasonographic examination showed two masses of 24 and 32 mm, with a necrotic center. The cervico-thoracic computed tomography (CT)-scan showed a pseudo-tissular mass poly-lobulated developed at the base of the neck intimately to the thyroid gland and extending into the superior mediastinum (Figure 1). Exploratory cervicotomy was performed and, preoperatively, we discovered a cystic mass, surrounded by a fibrous hull, in contact but independent of the thyroid gland, which extended inferiorly behind the sternum. Puncture of the mass brought translucent vesicles suggesting a hydatid cyst (Figure 2). The removal of the cyst with its fibrous hull was difficult because of the inflammatory reaction around the cyst. A cleaning by a hypertonic saline solution has been done to remove all the vesicles. The thyroid gland was not removed since it seemed normal. Post-operatively, the patient has received Albendazole: 400 mg orally twice a day for 3 mo. An abdominal ultrasound was done and revealed no evidence of other involvements. The evolution was marked by a local recurrence of the hydatid cyst 9 mo later. The patient has been reoperated in collaboration with a cardiovascular surgeon. Histopathological examination of the surgical specimen confirmed the diagnosis. The outcome was favorable after a follow-up of 2 years.

Figure 1 Computed tomography-scan showing a poly-lobulated mass developed at the base of the neck intimately to the thyroid gland and extending into the superior mediastinum. 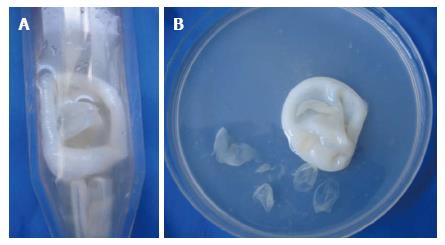 Figure 2 Hydatid vesicles obtained by an aspiration of the cystic mass.
DISCUSSION

Hydatidosis is a cosmopolitan anthropozoonose common to humans and many mammals. It occurs mainly in some Mediterranean countries, South America, Australia and Central Asia[1]. The sheep is the intermediate host and the dog is the definitive one. Humans are accidently infected by oral ingestion of tapeworm eggs in contaminated food or water or direct contact with host (licking, caressing)[2]. The parasite borrows the portal system, arrested in 80% of cases in the liver or lung[3]. Once these two filters (liver and lung) exceeded, it may be located in any other region of the body[4]. Cervical hydatid cyst is a rare entity whose frequency does not exceed 1% of all hydatid localizations[1,2]. In Tunisia, two studies on hydatidosis have been reported, those of Ben Ayed et al[5] and Zargouni et al[6], they estimated the incidence of head and neck localizations at 1.06% and 0.75% respectively. Cervical hydatid cyst presents as a firm, painless mass, slowly growing, in a patient whose general condition is retained[1]. Palpation should be cautious because of the risk of rupture[7]. It is a rarely evoked diagnosis, even in endemic areas, especially in the absence of other associated localizations. Signs of irritation or compression of adjacent organs may be seen[7]. Zerhouni et al[8] reported a case of cervical hydatidosis revealed by laryngeal dyspnea. Signs of cracking or rupture may also occur[1]. Laboratory tests are often negative, apart from a non-specific hypereosinophilia. Serological tests could be contributing when positive[4].

The place of imaging is important in cervical hydatidosis not only to approach the diagnosis, but also in search of other involvements, especially the liver, lung or spleen[9]. Cervical ultrasound is most often the diagnostic key[4,10]. It specifies the fluid nature of the swelling and its place[4,10]. Sensitivity is about 95% and may reach 100% in the forms with vesicles[4]. It shows a similar sonographic appearance to the other hydatid cysts, especially the hepatic one, corresponding to the classification of Gharbi[4,7]. Toward such masses, we can also discuss a cystic hygroma, a cold abscess, a chronic hematoma or an epidermal cyst. The contribution of CT scan is considerable especially in these cases. It contributes to the positive diagnosis by specifying the nature of the mass, its topography, its size and its relation with adjacent structures[4,10]. It shows a fluid density mass, with net and regular limits, unmodified by the contrast[7]. MRI provides better locoregional anatomical study and a detailed analysis of the cystic walls because of its multiplanar character and highest contrast resolution[10]. Hydatid cyst is hypointense on T1 and hyperintense on T2-weighted sections[7]. Daughter vesicles are more hypointense than the rest of the cystic fluid on T1-weighted images and hypo-or hyperintense on T2, according to the presence or absence of scolex[10] which are the features of hydatid cysts but are present in only 30% of cases[11]. The cyst wall appears on T2-weighted images divided into two layers of different signal. The peripheral layer, corresponding to the pericyst is hyperintense on T2 and takes Gadolinium contrast. The inner layer is T2 hypointense without contrast enhancement and corresponds to the fibrous tissue[7,10]: that’s the “Rim sign” described by Von Sinner[7].

A chest-X-ray and abdomino-pelvic ultrasound should be performed to look for other involvements[2]. In our patient, no other localization was found.

The fine needle aspiration cytology (FNAC) can contribute to the diagnosis by showing a crystal clear fluid, feature of hydatidosis. However, this review is contested by some authors because of the risk of cracking, dissemination, anaphylactic reaction and sometimes fatal infectious inoculation[2]. It was not performed in our case.

Only histopathological examination allows diagnosis. It shows three layers of hydatid cyst. The inner most germinal layer is thin and translucent on gross. The embryonic tape worm, scolices, develops from an out pouching of the germinal layer and form hydatid sand, settling into the dependent parts of the cyst. The cyst fluid is crystal clear, as it is transudate of serum containing proteins and is therefore antigenic. The middle laminated membrane is white 2 mm thick and is easily ruptured. The outer layer or pericyst is a rigid protective layer with a few millimeters thickness, representing response of the host to the parasite[12]. Surgical removal is the single effective treatment of cervical hydatidosis[12]. It is recommended to protect the operative field with a scolicidal solution to avoid the spread of scolex in case of cyst’s accidental rupture[13]. Some authors recommend intracystic injection of scolicidal agents such as hypertonic saline[8,14]. The complete removal carrying away the closed cyst (without rupture) is the method of choice[2,7]. Subtotal pericystectomy or the protruding dome resection are indicated when intimate contact between the cyst and neurovascular axes[7]. Medical treatment with albendazole is reserved for multifocal cysts, non-removable ones, non-operable patient, or per-operatory cyst rupture[2,13]. Rigorous postoperative monitoring at short and long term is necessary. It is mainly based on ultrasound at the rate of 3 to 6 mo to a year to examine the state of the residual cavity[15]. CT scan is reserved for doubtful cases of recurrence and monitoring of large residual cavities[15]. Serology is practiced 6 mo to one year after surgery. The persistence of high levels of antibodies and especially ascension 6 mo to 1 year after surgery testifies to the existence of other unknown cysts, a recurrence or a secondary infection[4]. In our case the monitoring was clinical and ultrasonographic and revealed a recurrence of the disease after 9 mo.

Cervical hydatid cyst is a rare entity even in endemic countries. It is a benign disease but a potentially serious affection by its possible complications. It must be considered in any cystic cervical mass especially in the presence of other associated localizations. Imaging is of a considerable interest in the diagnostic orientation, but the confirmation is obtained by histopathological examination. The basic treatment remains surgical. The prognosis is generally good provided regular and careful monitoring.

A 53-year-old woman, with a history of hypertension and depressive syndrome, presented with an isolated cervical mass appeared one year ago.

Physical examination found a 55 mm × 30 mm swelling located at the base of the neck. The mass was painless, mobile with no local inflammatory response.

Laboratory tests did not found an inflammatory syndrome.

Ultrasonographic examination showed two masses of 24 and 32 mm, with a necrotic center. The cervico-thoracic computed tomography-scan showed a pseudo-tissular mass poly-lobulated developed at the base of the neck intimately to the thyroid gland and extending into the superior mediastinum.

Cervicotomy was performed by removing the cystic mass with its fibrous hull. A cleaning by a hypertonic saline solution has been done to remove all the vesicles. Post-operatively, the patient has received Albendazole: 400 mg orally twice a day for 3 mo.

In countries with high incidence of hydatidosis, people with cervical cystic masses may be tested for hydatidosis serology in order to assess the diagnosis preoperatively.

FNAC: The fine needle aspiration cytology is an inexpensive and safe technique that contributes to the diagnosis of disease sites.

Through this case report, we retain that hydatidosis must be evoked as a differential diagnosis in front of cystic masses of the neck. Surgery must be accurate to remove all the cystic membrane to avoid the recurrence and the locoregional complications of the disease.