Contact dermatitis (CD) is the most common professional skin disease, with frequencies ranging from 24 to 170 every 100000 individuals. Approximately 20% of the United States population suffers from CD. CD can be classified according to its origin and severity. ICD stands for irritant CD, whereas ACD means allergic CD. Their clinical presentation includes acute, sub-acute and chronic eczema. Despite their different origin, ICD and ACD often present similar clinical and histologic findings. The current gold standard for diagnosis is patch-testing. However, patch-testing is being questioned in terms of validity and reproducibility, as it relies heavily on the skill of the observer. Real-time reflectance confocal microscopy is a non-invasive imaging technique that bears strong promise for the study of CD, and it enables the evaluation of cellular and subcellular changes over time with similar resolution compared to that of conventional histology.

Core tip: Contact dermatitis (CD) is the most common professional skin disease. CD is classified into irritant (ICD) and allergic (ACD), with both subtypes displaying sub-acute, acute and/or chronic eczema. The gold standard in CD diagnosis is patch-testing, although its validity and reproducibility are under question. Real-time reflectance confocal microscopy is a very promising tool for the diagnosis and management of ACD and ICD, providing significant advantage over conventional histology (due to the possibility to manage the disease through repetitive assessment) and patch-testing, due to increased sensitivity and specificity.

Contact dermatitis is the most common professional skin disease, with frequencies ranging from 24 to 170 every 100000 people[1]. Approximately 20% of the United States population suffers from CD[2], causing loss of over four million work days and costing approximately $400 million per year[3-5]. CD is classified into irritant (ICD) and allergic (ACD), with both subtypes displaying sub-acute, acute and/or chronic eczema[6]. Despite their different origin, ICD and ACD often present similar clinical and histologic findings. Interestingly, the physiopathology of ICD and ACD is different, particularly during the initial phases of the inflammatory process. ACD requires pre-sensitization to haptens, i.e., low molecular weight antigens[7]. This means that ACD actually is a delayed-type hypersensitivity inflammatory reaction mediated by memory T cells[8-11]. Conversely, ICD is a non-specific inflammatory dermatosis caused by direct toxicity of the chemical inducer on skin cells. Cell damage produces inflammatory mediators that activate the innate arm of the immune system[6].

The gold standard in CD diagnosis is patch-testing[12], although its validity and reproducibility are under question[13,14]. According to the North American Contact Dermatitis Group (NACDG), the sensitivity/specificity of this technique is just below 85%, with false positives in the 15%-18% range[15,16]. Evaluation depends on the skill and experience of the medical practitioner, e.g., to evaluate weak positive results with low clinical relevance. In cases like this, establishing an ACD or ICD diagnosis becomes complicated[12].

RCM is a non-invasive technique that enables detailed study of CD over time[17,18]. Several studies have correlated the CD findings obtained using RCM to those using conventional histology[19]. RCM criteria are: disruption of the integrity of the stratum corneum; parakeratosis; spongiosis of the stratum granulosum, and exocytosis[19] (Figure 1). Conventional histology is limited to a complementary role in ACD since the presentation of the disease evolves over time and multiple biopsies would be required[2]. RCM is therefore a promising tool to study CD since it enables following the temporal evolution of the disease at a cellular and even subcellular level, unlike conventional histology[2]. 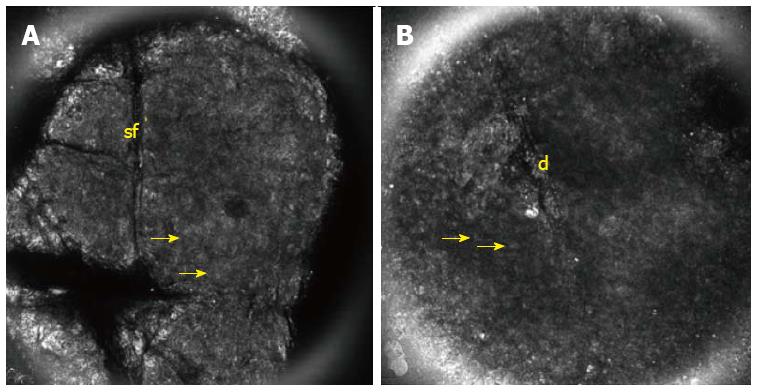 ACD is, at is etiological core, a memory T cell-mediated, delayed-type hypersensitivity reaction to haptens that enter into contact with the skin. Sensitization is initiated by professional antigen-presenting cells in the skin, e.g., Langerhans cells (LC) and/or skin dendritic cells (sDC), which process the haptens and migrate to the lymph nodes, where they initiate the adaptive immune response. This causes amplification of memory T cells[13]. Keratinocytes also contribute to the inflammatory reaction: some haptens, e.g., nickel, induce them to produce IL-23, which promotes the clonal expansion of TH17 T lymphocytes[20]. ACD clinical manifestations appear in response to the activation of CD8+ and IFN-gamma-producing TH1 CD4+ T cells that mediate the elimination of the hapten-carrying keratinocytes[20]. A summary of pathophisiologic features of ACD and ICD can be found in Table 1.

Clinical findings include erythema and edema, followed by the appearance of numerous papulae and vesicles. Other phenomena ensue in chronic phases of the disease, including lichenification, fissures and pigmentation. These manifestations are associated to intense itching, initially in the contact area, but that can spread to other regions of the skin[6].

ICD is currently described as an inflammation not mediated by the immune system. However, eczema is caused by the activation of the innate arm of the immune system[6]. Most chemical substances, depending on their concentration, can cause ICD. For example, 0.5% dinitrofluorobenzene causes ICD, whereas it takes up to 50% genariol to cause a similar reaction. Penetration through the skin layers induces expression of cytokines and chemokines that cause the inflammatory reaction. Keratinocytes represent 95% of skin cells and they produce a plethora of inflammatory mediators upon chemical challenge. The best described in ICD are: IL-1α and β, IL-6, IL-8, TNF-α, GM-CSF and IL-10[6] (Table 1).

ICD is a risk factor to develop ACD, due to the maturation of skin DC[21], which present antigens to T cells in lymph nodes and bridge innate and adaptive immunity[22,23].

Clinical findings of ICD include erythematous maculae and/or papillae, or erythematous-desquamative patches with frequent blistering. Lesions are commonly limited to the skin area in contact with the irritant. In ICD, burning sensation around the affected area is more frequent than itching compared to ACD[6].

CONVENTIONAL HISTOLOGY AND RCM IN THE EVALUATION OF ACD AND ICD

Differential diagnosis of ACD and ICD using conventional histology is very difficult due to the fact that most histologic findings are similar[10]. However, minor differences sometimes enable forming an educated diagnosis. For example, inflammatory infiltrate is more prominent and deep in ACD than in ICD; in the latter, infiltrate is predominantly found in the epidermis[24]. Also, ACD induces a follicular spongiosis pattern not observed in ICD[25]. However, these observations are minor differences that usually do not justify the use of conventional histology: the two major reasons are its lack of temporal range as well as the damage caused to the affected area during biopsy collection and the introduction of handling artifacts due to handling, fixing and staining[2]. In this regard, RCM appears superior to conventional histology and patch-testing[2]. In addition to its non-invasive nature that enables repetitive observation of the affected area, its resolution (1 μm lateral × 3 μm axial) enables an accurate follow-up with a resolution close to that of conventional histology during exploration of areas situated between the stratum corneum and the upper layers of the reticular dermis[26].

RCM findings reveal additional differences between ACD and ICD. ICD displays a significant increase in the disruption of the stratum corneum as well as parakeratosis and increased epidermal thickening compared to ACD[27]. On the contrary, ACD exhibits increased exocytosis and microvesicle formation, reaching a maximum difference at 96 h compared to ICD[27]. Initial stages of ACD also exhibit blood vessel dilation in the deeper layers of the skin2 (Table 2). RCM also permits identifying the cells within the inflammatory infiltrate (Figure 2). During ACD, dendritic-shaped cells could be visualized forming contacts with keratinocytes. These cells are likely Langerhans cells, which are present in elevated numbers only in ACD, but not in normal skin[2]. 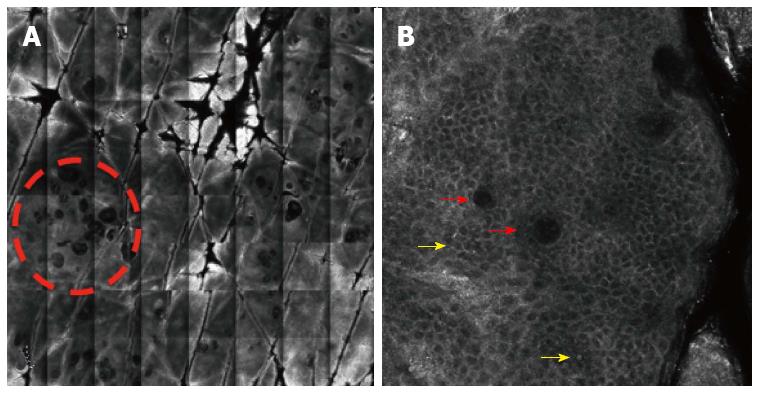 RCM permits the evaluation of the changes that occur during ICD and ACD over time to establish a chain of events. Disruption of the stratum corneum is commonly observed during the first few hours after contact with the irritant substance. These changes are frequently absent in ACD at the same temporal point, but can appear later in sub-acute eczema produced during the development of ACD[28]. The levels of exocytosis and spongiosis at the initial stages are similar in ICD and ACD, but latter stages reveal increased spongiosis in ACD, which is likely due to slower recovery compared to ICD[28].

Whereas the findings regarding ACD and ICD using RCM are still rather preliminary due to the limited sample size, they strongly indicate the usefulness of the technique for the diagnosis and management of both types of CD as well as additional steps in product safety and testing to prevent the onset of either type of CD. Some specifics include: (1) pre-market testing to assess the safety of drugs and cosmetics. At present, the gold standard for cosmetic testing includes patch-testing, which, as outlined above, compares poorly to RCM in terms of specificity and sensitivity; (2) establish the optimal sub-irritant concentration of haptens used in patch testing; and (3) determine thresholds for different irritants and their ability to induce ICD. Preliminary findings indicate that additional factors influence the ability of a given hapten to induce ICD.

In summary, RCM is a very promising tool for the diagnosis and management of ACD and ICD, providing significant advantage over conventional histology (due to the possibility to manage the disease through repetitive assessment) and patch-testing, due to increased sensitivity and specificity. Furthermore, RCM can be used to evaluate the response to therapy and evolution of the disease over time.