The term fibromatosis describes fibrotic tumor-like lesions of the skin which are seen in all age groups. They may be congenital or acquired and occur as single or multiple lesions. Classification of fibromatosis includes several clinical and pathologic variants. Progressive nodular fibrosis of the skin is a rare condition which has been scarcely reported in the literature and never in pediatric age. The clinical presentation is not specific showing asymptomatic, reddish-brown nodules. Histology shows abundance of spindle-shaped dermal fibroblasts. Here we describe an unusual pediatric case and discuss the diagnosis, which is possible only with histopathology, and the importance of differential diagnosis.

Fibromatosis is a term used to describe benign fibrous tissue proliferations which are apt to infiltrate the skin and recur when removed, without to metastasize. They consist of a heterogeneous group of several conditions which may be congenital or acquired and occur with singular or multiple lesions.

Progressive nodular fibrosis of the skin is considered a rare variant, although it does not appear in the classification of superficial fibromatoses. These include palmar and plantar fibromatosis, penile fibromatosis, knuckle pads and the large group of juvenile fibromatoses[1]. It is characterized by multiple skin nodules developing around the teenage years. The condition, scarcely described in the literature, is slowly progressive over several years. No organs other than the skin are involved and the prognosis is good.

Here we present a new case of progressive nodular fibrosis of the skin which, to the best of our knowledge, is the first pediatric case reported in the literature thus far.

A 5 years-old girl referred to our Dermatology Unit for the continuing eruption, during the last four months, of multiple cutaneous small nodules localized at the trunk, legs and arms.

Family history was negative for skin diseases. Personal anamnesis was negative except for varicella which occurred nine months before. For this reason the initial skin lesion had been interpreted by her paediatrician as a post-varicella keloid. Only later, after the outbreak of several small nodules throughout the following months, the child had been addressed to our unit.

At physical examination the child presented eight reddish papulonodular lesions involving the trunk, arms and legs (Figure 1). The lesions were firm, asymptomatic, with a diameter ranging from few millimetres to one centimetre. No tendency to coalescence was observed. Laboratory investigations did not disclose abnormalities. Histopathologic examination showed a normal epidermis and a dermal proliferation of numerous fibroblasts without cytologic atypia (Figure 2). At immunohistochemical examination neoplastic cells resulted negative for desmin, CD34 and S-100 protein. No excisional therapy was considered and the girl is still under follow-up. 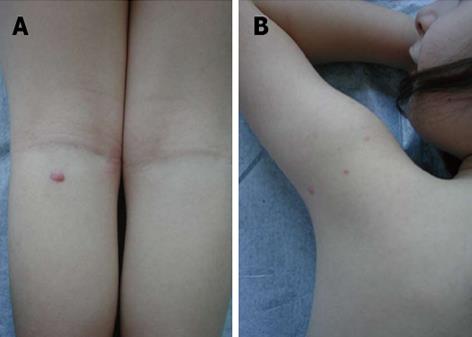 Figure 1 Clinical findings. A: The first nodular lesion was localized on the flexor surface of the left limb; B: Cluster of three reddish nodules on the left shoulder. 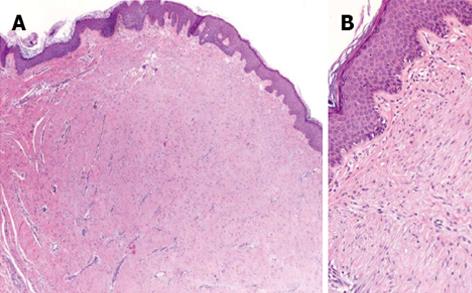 Figure 2 Pathological findings. A: Dermal fibroblastic proliferation with a variably collagenous stroma which tends to be more cellular than keloids, with less prominent hyalinised collagen fibers (HE, × 4); B: Dermal proliferation of numerous fibroblasts without cytologic atypia (HE, × 20).
DISCUSSION

“Progressive nodular fibrosis of the skin” or “multiple benign progressive fibromatosis of the skin” is a very rare disease. The condition was firstly described by Stevanović[2] in 1977 in a 44-year-old man who developed multiple skin nodules from the age of 10 years. We were able to discover in the literature only a further case reported by Bauer et al[3] in a 33-year-old man who noticed the first nodules fifteen years earlier. Thus, to the best of our knowledge, our patient is the first pediatric case of progressive nodular fibrosis of the skin reported in literature to date.

The clinical presentation of this unusual disorder is quite non specific occurring as a papulonodular eruption of reddish-brown elements without associated symptoms. In our case, at physical examination, the oldest resembled an hypertrophic scar, but the newer ones did not show any cicatricial aspect. History of varicella during the preceding months induced the suspect of a post-varicella keloid reaction in the first lesion, but the histology was not typical of a keloid scarring. In addition multiple nodules continued to occur throughout the following months.

Histological examination is mandatory to achieve a correct diagnosis showing the presence of numerous spindle-shaped fibroblasts in the dermis. Keloids are characterized by the presence of acellular hyalinized eosinophilic collagen bundles. Nodular scleroderma is a fibrosing reaction, presenting well-defined, firm, raised nodules, resembling keloids which usually occur in patients already suffering of scleroderma. Histological findings consist of inflammation at the dermal-subcutaneous junction and hyalinized collagen bundles[4]. Connective tissue nevus (collagenoma) is usually observed in the first years of life and is histopathologically characterized in the dermis by a diffuse increase of normal appearing collagen[5].

Bauer et al[3] in their paper reported the results of a molecular study showing an increased collagen synthesis and a reduced production of collagenase. The basic defect leading to this disorder is still unknown. However these authors postulated that the fibroblasts of those lesions may represent a clonal population of cells with an aberration in the transcription or translation during collagen synthesis. Also a posttranslational abnormality could not be excluded.

In conclusion, progressive nodular fibrosis of the skin is a rare and probably underestimated and misdiagnosed cutaneous disease. It should be added to the list of juvenile fibromatoses[1]. This condition should be suspected in the presence of multiple, spontaneous papulonodular lesions occurring in adults as well as children. Histology is required for the diagnosis. The low number of reports does not allow to carry out a reasonable, specific protocol follow-up, but regular visits are strongly suggested, in our opinion, particularly in children.