The spontaneous and simultaneous rupture of both quadriceps tendons is uncommon and has rarely been reported in the literature. The current case involves a 43-year-old man with end-stage renal disease requiring hemodialysis for the past 20 years. The patient experienced bilateral knee pain and swelling and was unable to bear weight. Physical examination revealed bilateral quadriceps tendon defect above the patella and loss of active extension. Although plain radiographs of both knees showed no fracture or widening of the joint space, an inferiorly positioned patella was observed. Ultrasonography of the knees revealed a quadriceps tendon defect at the upper edge of each patella, while MR imaging revealed a tear in each quadriceps tendon from the superior poles of the patella. The patient then underwent surgical correction wherein the tendons were repaired using sutures passed through drill holes in the patella. The knees were immobilized with splints for 4 wk before starting physiotherapy. The patient subsequently regained full functional activity within 1 year.

Core tip: Spontaneous bilateral quadriceps tendon rupture is uncommon, while the symmetry of physical findings may make the diagnosis even more difficult. Testing the extensor mechanism must be an essential part of every knee examination. Early diagnosis and surgical repair are associated with the best outcomes. The most likely etiology of tendon ruptures in patients receiving hemodialysis is the fragility of the junction between the tendon and the bone resulting from long-standing and poorly controlled hyperparathyroidism.

Bilateral quadriceps rupture is a very rare disabling injury. Although traumatic in nature, it is often secondary to metabolic disorders and predisposing medical conditions, such as diabetes, gout, hyperparathyroidism[1], systemic diseases, or chronic renal failure[2,3]. The spontaneous and simultaneous rupture of both quadriceps tendons has been rarely reported in the literature and is usually observed in patients aged over 40 years; a sex ratio of 6:1 has been recorded for this phenomenon[4,5]. The most commonly reported mechanism is the sudden reflexive eccentric contraction of the quadriceps, with the foot anchored to the ground and the knees flexed. We herein report a case involving spontaneous bilateral rupture of the quadriceps tendon in a patient with renal failure receiving hemodialysis. Accordingly, we present clinical particularities, imaging data, and the management employed.

A 43-year-old male with renal failure (hemodialysis for 20 years) presented with bilateral pain and cutaneous depression upon palpation above the patella (Figure 1). The patient exhibited good general conditions with no signs of malnutrition. Bone densitometry, which was previously performed, revealed osteopenia related to chronic kidney disease. There was no significant medical history, and no other co-morbidities were noted. Although no traumatic context had been reported, clinical examination noted incomplete active knee extension that was very painful. Radiographs of the knee showed a lowering of the patella with diffuse bone demineralization due to renal failure (Figure 2). The patient subsequently underwent ultrasonography and magnetic resonance imaging (MRI) to examine the appearance of the overlying tendon and muscle (Figure 3). Accordingly, simultaneous and spontaneous rupture of both quadriceps tendons at the patellar insertion was confirmed. Laboratory analyses revealed a white blood cell count of 8540/mm³, hemoglobin of 8 g/dL, platelet count of 352000/mm³. Blood testing revealed the following values: sodium, 137 mmol/L; potassium, 4.8 mmol/L; calcium, 2.2 mmol/L; phosphorus, 0.9 mmol/L; serum uric acid, 267 μmol/L; creatinine, 765 μmol/L; and serum parathyroid hormone, 45 pg/mL (normal, 9-65 pg/mL). Hemostasis assessment was within normal limits. The treatment consisted of tendon reinsertion through tendon-to-bone repair (Figure 4). The patient was immobilized for 4 wk with a splint before undergoing regular rehabilitation. He was allowed to fully bear weight 6 wk after his surgery. The operative follow-up was simple. A year later, the patient showed excellent results and regained his former autonomy (Figure 5). 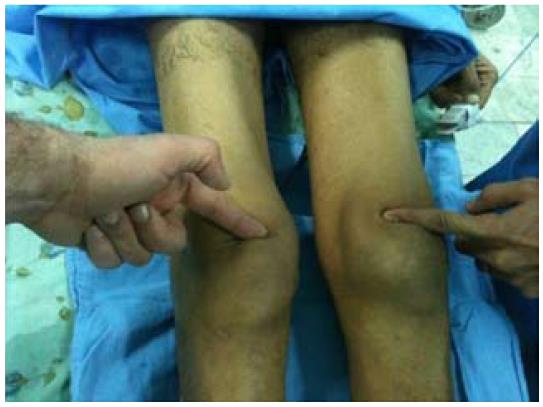 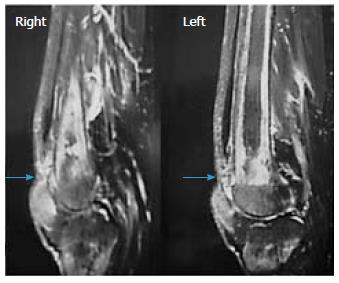 Figure 4 Surgical management of the injury through bilateral reinsertion of the tendon. A: Exposing the bilateral rupture of the quadriceps tendon; B: Quadriceps tendon reinserted through tendon-to-bone repair.

Bilateral rupture of the quadriceps tendon is a rare injury. Accordingly, the first reported case of simultaneous bilateral rupture of quadriceps tendons had been by Steiner and Palmer in 1949. Patients usually complain of severe knee pain and complete functional disability of the lower limbs. In younger patients, however, major trauma by direct shock or laceration by a blunt object has been more common. In the absence of a traumatic context, assessment should be focused on identifying systemic diseases wherein tendons become weakened. Hence, tendon ruptures could be caused by the diminution of local circulation, abnormalities in collagen metabolism, repeated microtrauma, weakening, and calcifications, which consequently reduce the elasticity of the tendon. Most authors agree that bone resorption at the tendon insertion sites due to secondary hyperparathyroidism contributes to the pathogenesis of tendon ruptures. In addition, weakening of the tendon may be observed when collagen is replaced by elastin during chronic metabolic acidosis due to chronic renal failure. Such patients are therefore at risk for bilateral ruptures. Many cases of bilateral ruptures in athletes consuming anabolic agents have been also reported in the literature[6]. Moreover, direct corticosteroid injections and fluoroquinolone use have all been associated with increased risk of tendon rupture[6]. Though fluoroquinolone use has most commonly affected the Achilles tendon, cases involving the rotator cuff, biceps, wrist extensors, and quadriceps tendons among others, have also been described[7,8]. The diagnosis of quadriceps tendon rupture has been based primarily on anamnesis and clinical examination.

Accordingly, Siwek and Rao[4] in 1981 showed that 28% of ruptures had not been initially diagnosed. Therefore, clinical examination is crucial and allows for rapid diagnosis, which is critical for optimal therapeutic management. Clinically, patients are no longer able to perform full active extension of the knee[9]. In a supine position, patients cannot elevate the lower limb while keeping it extended or maintain this position against gravity. In a seated position with the knees flexed at 90°, patients are unable to completely extend the knee when both the quadriceps tendon and retinaculum (aponeurosis of the vastus medialis and vastus lateralis, which are inserted on the patella) are torn. On the other hand, when the quadriceps tendon is torn while the retinaculum is intact, patients are able to achieve partial active extension without reaching full extension. During palpation of the quadriceps tendon, a “hole” and an interruption of tendon continuity are felt. However, the swelling and hematoma that subsequently develop may obscure the palpability of this “hole”[5]. Quadriceps tendon tears generally occur 2 cm above the upper pole of the patella. However, tearing occasionally occurs higher at the myotendinous junction, particularly in patients with reduced mobility and muscle atrophy. A differential diagnosis for patients unable to perform full active knee extension may include femoral nerve palsy, which might be traumatic or iatrogenic[10]. Accordingly, radiological examinations may help establish a more accurate diagnosis. Radiographic views of the knee may show soft tissue swelling above the kneecap. Calcifications at the superior pole of the patella may indirectly indicate quadriceps tendinopathy, which is a predisposition to rupture[11]. Considering that the patella is no longer subject to quadriceps traction, it may be located lower compared to the uninjured side in unilateral conditions (patella baja or patella infera).

Although ultrasonography is a non-invasive, rapid, and effective diagnostic tool for confirming a partial or complete quadriceps tendon rupture, interpretation of its results is examiner-dependent and must be performed by a trained specialist. MRI is another very sensitive diagnostic tool that can precisely locate the tear, determine which four layers of the quadriceps tendon are affected or whether the rupture is partial, and determine whether the retinaculum is torn[5]. As such, our patient underwent MRI to identify quadriceps tendon ruptures prior to surgery. Surgery based on reintegration for fresh lesions and tendinous plasty for old ones has always been the standard treatment for ruptures, with early surgical repair providing the best results[5]. Nonetheless, various surgical techniques have been described. In the case of tendon body tearing, an end-to-end suture allows for an excellent repair. For ruptures close to the patellar insertion, Krackow points[12] can be made in the tendon stump, which is then passed through the patella using longitudinal bony tunnels, ensuring good holding. A torn retinaculum must also be sutured. Lighthart et al[13] studied quadriceps tendon strength after transosseous suturing and tendon anchoring. Accordingly, their results showed no difference between the two techniques.

After the operation, walking was permitted albeit with a splint keeping the knee extended for 4 to 6 wk, which helps protect the reconstruction[14]. A mobilization of 0°-30° can be allowed to prevent adhesions. Most authors have reported good functional results, always with complete motion recovery and return to previous activities[13,14]. Though quadriceps amyotrophy is quite common, it carries no functional repercussions in everyday life. Moreover, recovery is difficult despite physiotherapy. In fact, only 4 to 6 wk of actual physiotherapy is provided postoperatively. Furthermore, a secondary rupture may occur but remains rare[7].

A missed diagnosis may lead to delayed repair, which could be problematic due to significant quadriceps retraction. As a result, end-to-end tendon suturing becomes difficult, and more complex surgical techniques are often necessary to fix the consequent defect and restore the extensor system of the knee. Several techniques have been described[5], including tendon grafting (auto- or allograft) and tendon flap advancement. Nonetheless, delayed repairs have worse results and higher complication rates. Early diagnosis and treatment are therefore essential for good healing and functional recovery.

Spontaneous ruptures of the knee extensor system are rare, and bilateral forms, which result in functional disability of both lower limbs, are exceptionally rare. Given that early diagnosis allows for rapid surgical management and thus optimal functional recovery, careful investigation of such ruptures through clinical examination, plain radiographs, and MRI is therefore necessary for better tear analysis.

This case involves spontaneous bilateral rupture of the quadriceps tendon in a patient with renal failure receiving hemodialysis. Accordingly, we present clinical particularities, imaging data, and the management employed.

Bilateral rupture of the quadriceps tendon.

Blood testing revealed renal failure and anemia without other abnormalities.

Only few cases of spontaneous bilateral rupture of the quadriceps tendon have been to date reported in the literature.

This case will help improve the understanding of the management of bilateral rupture of the quadriceps tendon, which is a rare injury. The main lesson learned was that early diagnosis and surgical repair are essential for achieving the best outcomes.

We thank the patient described for allowing us to share his details and thank Dr. Wassim Zribi and Dr. Mohamed Zribi for advice and performing the surgery.