A 75-year-old man presented with knee pain due to medial osteoarthritis of the knee in the orthopedic outpatient clinic. Conservative treatment was started with steroid infiltration. Besides his knee complaint reported a bilateral painless swollen calf muscle without traumatic cause, and also without any pain at night, fever or medical illness. On physical examination the soleus muscle had a swollen aspect in both calfs. The skin appeared normal without deformities and the arterial pulsations were intact. An X-ray did not show abnormalities in the tibia. Magnetic resonance imaging of the legs revealed bilateral multiple saccular intramuscular venous malformations involving the soleus muscle. Intramuscular venous malformations in skeletal muscles are rare, especially when the occurrence is bilateral. Bilateral venous malformations have the potential to be missed because of the intramuscular localization. Symptoms of intramuscular venous malformation can be often mild and overlap with non-exercise related compartment syndrome, claudication, lymphedema and post thrombotic syndrome or muscle strains.

Core tip: Intramuscular venous malformations involving in the skeletal muscles are rare, especially when occurrence of these lesions is bilateral. These lesions are easily missed due to intramuscular localization. We report a rare presentation of these lesions arising from the soleus muscle on both sides in a 75-year-old man, diagnosed with magnetic resonance imaging of the legs. When the lesions are asymptomatic conservative treatment is preferred. When the appearance is symptomatic surgical resection or sclerotherapy can be an option.

A vascular malformation is an aberrant morphogenetic type of blood or lymphatic vessel. The origin of vascular malformations is an abnormal embryonic development of the vascular build-up after the endothelial stage. The malformation consists of an arteriovenous, capillary, venous or lymphatic type. Also combined structures are described[1]. This subdivision is based on the type of vessel involvement. When a lymphatic vessel is involved the anomaly is called a lymphangioma. Abnormal connections between arteries and veins will lead arteriovenous shunting with a cluster of vessels, the nidus. The most common shown type of vascular malformation is the venous malformation. These are mostly situated in the skin and subcutaneous tissues and are present at birth, although clinical manifestation will usually become apparent later in life[2,3]. Intramuscular venous malformations on the other hand are rare especially when the occurrence is bilateral, and these have the potential to be missed because of the intramuscular localization[1,2]. In this report we have described a patient with bilateral extensive intramuscular venous malformations involving the soleus muscles with an asymptomatic presentation.

A 75-year-old man was seen in our orthopedic outpatient clinic with osteoarthritis of the right knee. He experienced morning stiffness, pain on the medial side of his right knee after walking and he had difficulties with full flexion of his knee. Conservative treatment was started with steroid infiltration, 4 cc lidocaine mixed with 1 cc depomedrol. Besides these complaints the patient reported a bilateral painless swollen calf muscle. The patient had noticed these swellings of the calf muscle a few years ago without any traumatic history. He had no pain at night and no fever or medical illness. The past medical history of the patient was uneventful.

On physical examination the soleus muscle was swollen on both sides. The swelling was localized on the right leg over the whole soleus muscle, 10 by 3 cm. On the left lower leg the swelling was about 3 by 3 cm over the medial part of the soleus muscle. A dimpling in both legs (right more than left) at the medial calf area was seen while standing (Figure 1). There was full strength in all lower leg muscles and the reflexes were normal on examination. The rest of the examination was unremarkable, the overlying skin appeared normal without deformities, erythema or warmth and the arterial pulsations were intact. Laboratory test results did not show any abnormalities. An X-ray did not show any bony irregularities in the tibia. 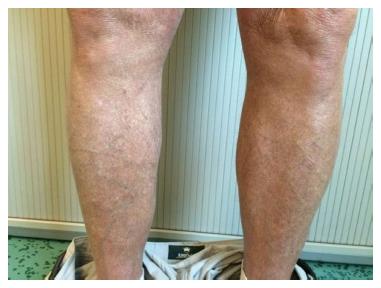 Figure 1 Frontal view of the lower legs. On physical examination the soleus muscle was a bit swollen on both sides, with a dimpling in both legs (right more than left).

Magnetic resonance imaging (MRI) of the legs revealed bilateral multiple saccular intramuscular venous malformations involving the soleus muscle (Figure 2). There was no nidus seen on MRI so an arteriovenous form of the malformation was not plausible. Due to its asymptomatic presentation no angiogram or ultrasonography was performed to further specify the lesion. After consultation of the vascular surgeon we did not perform surgical resection or focal sclerotherapy because of the asymptomatic nature of the lesions. After explanation of the possible muscle damage from resection and because of the fact that our patient had no disabilities in daily living, we agreed upon conservative management. At three mo follow up the swollen calf muscles were still asymptomatic and examination did not show any change of the venous malformations. We continued the conservative treatment focused on the osteoarthritis of the knee with good result.

To determine the nature of the vascular malformation MRI is the most accurate tool and it is superior to the other modalities such as ultrasound. On MRI, venous malformations have a T1-hypointense or T1-isointense signal with a T2-hypernintese signal[3]. In this case there were no nidi or connections between arteries and veins visible on the MRI so arteriovenous malformations were not plausible. The lymphatic system was shown without any abnormalities.

Surgical treatment for venous malformations is mostly not necessary and conservative therapy is preferred. Pain, bleeding due to lesions of the skin or cosmetic issues can make treatment indicated though after failure of nonoperative management. When the appearance is intramuscular, venous malformations can result in painful contractures of the involved muscles. In these cases operative treatment can be necessary. The main operative treatment is surgical resection or sclerotherapy (percutaneous embolization). Percutaneous approach is the recommended treatment due to the minor connections to the normal venous system[7]. This kind of treatment often required for larger extensive intramuscular lesions was not indicated in this instance. If sclerotherapy is impossible due to the extent or location more invasive therapy by performing excision of the lesion is possible. If surgical resection is planned it is important to visualize hidden deep truncular anomalies previously to the operation. Otherwise surgery can result in large defects with venous insufficiency and cosmetic deformities as undesirable results. The patient in our case had neither symptoms nor disabilities in daily living as a result of the intramuscular venous malformations whereby conservative treatment, focused on the osteoarthritis of the knee was chosen.

A 75-year-old man with osteoarthritis of the knee presented with asymptomatic bilateral painless swollen calf muscles, which were firstly noticed a few years ago without any previous traumatic cause.

All laboratory test results were within the normal limits.

X-ray of the both legs did not show abnormalities in the bones. Magnetic resonance imaging of both legs revealed bilateral multiple saccular intramuscular venous malformations involving the musculus soleus, nidus of the arteries and the veins in an arteriovenous form of the malformation were not found.

Biopsy was not performed so pathological findings could not be given.

Because of asymptomatic appearances of the bilateral swollen calf muscles conservative treatment was started in our case. Main treatment for symptomatic venous malformations is surgical resection or sclerotherapy (percutaneous embolization).

The precise etiopathogenesis of vascular malformations is still unclear, but the origin of the development lies in an abnormal embryonic root. Venous malformations are frequently shown and are simply diagnosed when situated in the skin or in the subcutaneous tissues. Uncommon localizations of these entities are those in the skeletal muscles. Bilateral appearances of venous intramuscular malformations in the lower extremities are commonly confused with other causes of tumor in the legs.

Asymptomatic bilateral intramuscular venous malformation is a rare type of vascular anomalies of which the origin lies in an abnormal embryonic development.

Bilateral intramuscular venous malformations in the skeletal muscles are rare, with mild symptoms, and have the potential to be missed because of the intramuscular localization.

A straightforward, simple case report with a reasonable review of the literature. The interest is from the differential diagnosis and the concomitant other pathology of knee arthritis.

Country of origin: The Netherlands