There is no advantage outcome in primary CTS for having additional HTFPF procedure in CTR. COR is still the standard treatment. Nevertheless, improvement of DSL and S-amp could be observed at 6 wk postoperatively.

Core tip: The study conducted a randomized controlled trial to compare between the hypothenar fat pad flap additional and conventional open carpal tunnel release in primary carpal tunnel syndrome. The study showed no advantage, however improvement of nerve conduction study was observed in the early postoperatively.

Carpal tunnel syndrome (CTS) is the most common compression neuropathy in the upper extremity[1]. The worldwide incidence is 5.8% in women and 0.6% in men[2], while the pathology and the causes are unclear. Several studies describe that the symptoms caused by direct nerve compression and nerve ischemia[3,4].

Fullerton[4] found that the numbness symptom of CTS may arise from the nerve ischemia. The median nerve ischemia alters axonal threshold and significantly increases both sensory and motor refractoriness resulting numbness and paresthesia in CTS patients[3]. Furthermore, the nerve ischemia may cause by venous return obstruction dued to external pressure that increases pressure in the region of entrapment, leading to nerve edema and eventually resulting in nerve damage and fibrous tissue[5,6] and also can be provoked by ganglia, neoplastic masses, vascular abnormalities, ligamentous attachments, and also different various structures (anomalous muscles, bifid median nerve, persistent median artery)[7].

Carpal tunnel release (CTR) is a standard treatment for patients who indicated to surgery of CTS and the success rate was 75%-98%. However, several studies[8] found that some patients who had persist or recurrent compressive symptoms after this surgery was as high as 2%-25%. Nancollas et al[9], a retrospective review of 60 cases with an average of 5.5 years follow-up, had reported 57% recurrent symptoms within 2 years after surgery.

The hypothenar fat pad flap (HTFPF) procedure, first described by Cramer and refined by Strickland et al[10] is usually utilized in recurrent CTS, there is a adipose tissue from hypothenar eminence as a pedicle flap to cover the median nerve that provides vascularity, enhance nerve gliding property and prevent adhesion to the median nerve. This procedure had an excellent result and low rate of complication[8,10,12]. We hypothesized that increasing vascularity to the median nerve by HTFPF procedure could improve the nerve recovery and the success rate of CTR in primary CTS compared to the conventional CTR alone.

Forty-five patients (49 hands) who diagnosed with primary carpal tunnel syndrome were enrolled into the study during January 2014 and March 2016 while 8 of them were excluded from the study. Thirty-seven patients (41 hands) were conducted in this prospective randomized controlled trial study according to consort diagram (Figure 1). The study was approved by the local institutional review board and all patients signed an informed consent. 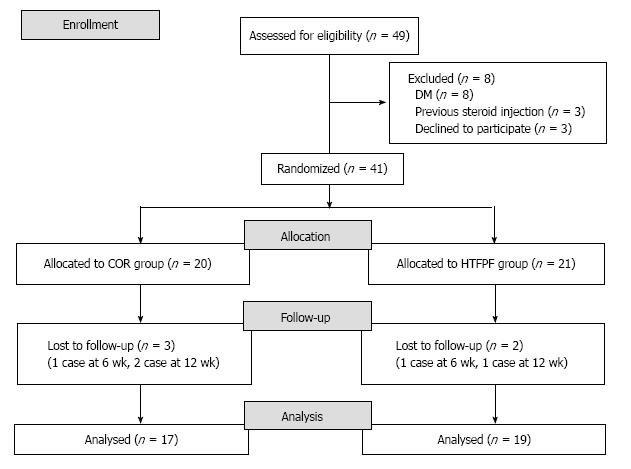 Patients were randomized into either conventional open carpal tunnel release group (COR) or HTFPF group by using a computer generated table, STATA 12.0, Statacorp, college station, TX, United States (Block of four randomization) and concealed with sealed envelopes which were opened during the operation after transverse carpal ligament was released. All of the patients and assessors in this study were blinded after the interventions assignment.

The only one senior hand surgeon performed CTR throughout the study. All patients were injected with 1% lidocaine without adrenaline for local anesthesia. A tourniquet was inflated 250 mmHg. Longitudinal skin incision was made from distal to the distal wrist flexion crease and 5 mm ulnar to thenar crease along the Kaplan’s line about 3 cm in length. Subcutaneous tissue and palmar fascia were dissected and retracted by Ragnel retractors. The transverse carpal ligament (TCL) was exposed and released by Stevens tenotomy scissors until clearly identified the median nerve (Figure 2A).

The concealed envelopes were opened to allocate the group of patients. In COR group, normal saline was irrigated and skin sutured with nylon no 5-0. In HTFPF group, superficial dissection at hypothenar fat was performed deep to palmaris brevis muscle and care should be taken to avoid digital nerve injury of ring and small fingers. The hypothenar fat pad with its vascular from ulnar artery was harvested (Figure 2B) then sutured HTFPF to radial half of TCL remnant with absorbable suture material for coverage over the median nerve (Figure 2C). Normal saline was irrigated and skin was sutured with nylon no 5-0. Wound dressing was applied in both groups.

All of patients were followed up 6 and 12 wk after surgery and nerve conduction study (NCS), physical examination, pain [visual analog scale (VAS)], symptom severity scale and functional status scale (Boston questionnaire) were recorded at each visit. Sutured was removed 2 wk after surgery in all patients.

NCS, pain (VAS), Levine score and all examination were compared between two groups at preoperatively, and 6 and 12 wk postoperatively. The NCS was performed as described in the previous literature[17] by the same physician.

The demographic data including age, gender, BMI, onset of duration, side of operation, hand dominant and examination (Tinel’s sign and Phalen test) were collected with excel version 2013. All of the continuous data were normally distributed and were presented with mean ± SD, while the categorical data were shown in percentage.

The primary and secondary outcomes were analyzed with the repeated ANOVA and Graphpad software version 6.0 and the relationship between groups and time to follow-up were evaluated. These data include NCS, Levine score, pain (VAS), 2-PD, grip strength, pinch strength and SWM. P < 0.05 was used to determine the correlation between two groups and time to follow-up postoperatively. 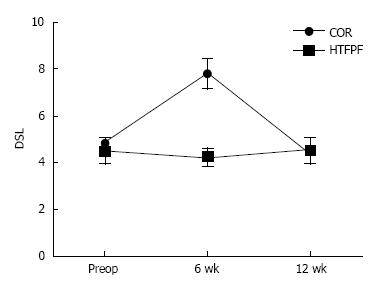 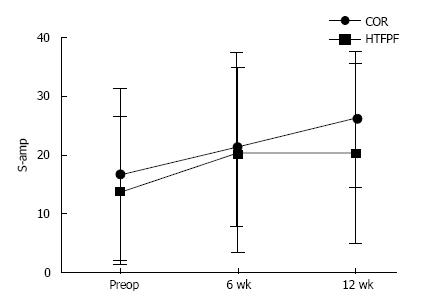 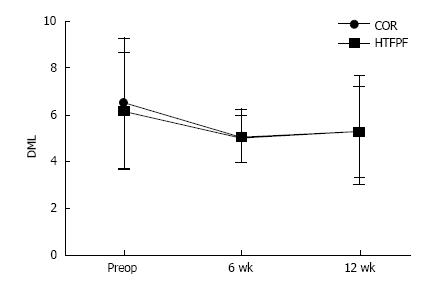 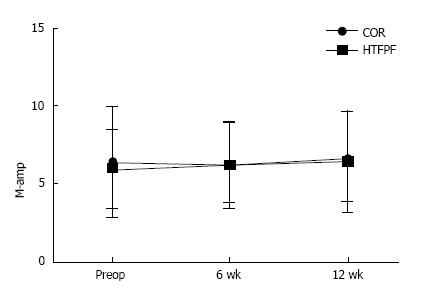 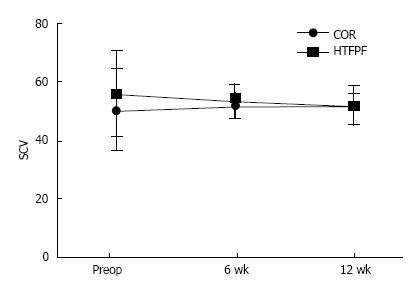 At 6 wk after operation, painful scar was occurred 11.76% and 31.58% in COR and HTFPF groups respectively, eventually the symptom was resolved in both groups at 12 wk and there were no statistically significant difference between two groups. Two of 19 cases in HTFPF group had pain over hypothenar eminence at 6 wk, however this symptom was disappeared at 12 wk.

The HTFPF is vascularized pedicle flap that supplied by branches of ulnar artery and widely used for recurrent or persistent CTS with median nerve hypersensitivity. Most authors reported an excellent result of HTFPF[8,10-12], even though had some modification by Craft et al[12] suggested the combination of microneurolysis of the median nerve and HTFPF.

It is limited evidence in the flap coverage procedure on the median nerve in primary CTS. Increasing vascularity to the median nerve may result in rapid nerve recovery and improve success rate. For that reason this study was conducted to add this procedure during CTR. This study used NCS for detection of nerve electrophysiology in short-term follow-up since there was no difference in the outcome of mid-term and long-term follow-up[9,14].

The advantage of HTFPF procedure are well-vascularized pedicle flap, could be harvested from same incision use of CTR with no donor site morbidity and sufficient to cover the median nerve in carpal tunnel[10,15].

The result of NCS revealed better nerve recovery in DSL in HTFPF group at 6 wk but not different at 12 wk compared to COR group. The S-amp was improved after surgery in both groups, however no significant difference between two groups was observed. There was no advantage outcomes of HTFPF procedure compared to COR in primary CTS. There were few studies performed the NCS in early postoperative, however this study shows an early detect of the electrophysiological conduction change in median nerve. This result was similar to study of Ginanneschi et al[14] reported at one month after CTR, SCV and DML were improved.

Conversely, El-Hajj et al[16] compared the DML and DSL, M-amp and S-amp, and SCV preoperatively and postoperatively, the result showed an improvement in all studied variables, except the DSL at 18 wk after surgery which improved only at 42 wk. The author explained that recovery of the sensory was delayed compare to motor, because the sensory fibers were affected more than motor fibers, and the myelin sheath more than the axons in most cases of CTS. Tahririan et al[17] study showed significant improvement in DSL, DML and SCV 6 mo postoperatively.

The strength of this study is the prospective randomized controlled trial, while small number of cases in each group is the limitation. Increased risk of painful scar and pain over the hypothenar eminence was found in HTFPF group. However, there was no statistical difference between two groups.

This study concluded that there was no advantage outcome in primary CTS for having additional HTFPF procedure in CTR compared with conventional technique. COR is still the standard treatment in primary CTS. Nevertheless, improvement of DSL and S-amp could be observed at 6 wk postoperatively. However, the interesting point is the recurrent rate in long-term follow-up between two groups and further data collection and analysis should be carried out in the future.

There is no other studies have done the comparison between hypothenar fat pad flap and conventional carpal tunnel release in primary carpal tunnel syndrome before.

Although no advantage outcome in primary carpal tunnel syndrome for having additional hypothenar fat pad flap procedure in carpal tunnel release. However, improvement of distal sensory latency and sensory amplitude could be observed at 6 wk postoperatively.