Dysplasia epiphysealis hemimelica (DEH), or Trevor’s disease, is an osteocartilaginous epiphyseal overgrowth typically occurring in children. The literature reports 6 adult cases and none describe recurrence requiring additional procedures. We present a new-onset proximal tibial DEH in an adult recurring approximately 3 years after open excision. A 39-year-old female presented with a history of right knee pain, swelling, and instability. Physical examination revealed a firm proximal tibial mass. Computed tomography (CT) imaging showed an exophytic, lobulated, sclerotic mass involving the anterolateral margin of the lateral tibial plateau. Magnetic resonance imaging was suggestive of an osteochondroma. The patient underwent curettage of the lesion due to its periarticular location. Histology revealed benign and reactive bone and cartilage consistent with periosteal chondroma. Two and a half years later, the patient presented with a firm, palpable mass larger than the initial lesion. CT revealed a lateral tibial plateau sclerotic mass consistent with recurrent intra-articular DEH. A complete excision was performed and histology showed sclerotic bone with overlying cartilage consistent with exostosis. DEH is a rare epiphyseal osteocartilaginous outgrowth frequently occurring in the long bones of children less than 8 years old. DEH resembles an osteochondroma due to its pediatric presentation and similar histologic appearance. Adult-onset cases comprise less than 1% of reported cases. Recurrence rate after surgical intervention is unknown. Only 1 such case, occurring in a child, has been described. Clinicians contemplating operative treatment for DEH should note the potential for recurrence and consider complete excision. A follow-up period of several years may be warranted to identify recurrent lesions.

Dysplasia Epiphysealis Hemimelica (DEH), otherwise known as Trevor’s Disease, is an exceedingly rare disorder of childhood[1,2]. Characterized by excessive cartilaginous growth from the epiphyseal region, DEH is grossly and histologically similar to osteochondromas found in the metadiaphyseal region[1]. Patients generally present with localized joint pain, tenderness, and dysfunction, most commonly affecting the foot and ankle but also reported in the knee, hip, and scapula. DEH has an incidence of approximately one in 1000000 with males affected up to three times more frequently than females[3]. Three types of clinical presentation have been described: Localized to one epiphysis; affecting more than one epiphysis in the same limb; and diffuse disease affecting the entire lower limb[2].

We describe the novel case of a 39-year-old female with DEH of the proximal tibia in whom recurrence occurred three years after an initial open curettage and resection. The patient was eventually treated definitively with surgical excision.

A 39-year-old female initially presented to our outpatient office with a several month history of right knee pain, swelling, and instability, particularly with walking down stairs. Non-steroidal anti-inflammatory medications only mildly relieved her discomfort. She denied night pain, constitutional symptoms, or a recent history of trauma or injury. Medical history was significant for a history of congenital hip dysplasia and family history was negative for any inflammatory diseases, bone disorders, or dysplasia.

On physical exam, a mild antalgic gait was noted. A right knee effusion was present as well as lateral joint line tenderness. A firm, palpable mass protruding from the anterolateral proximal tibia was easily appreciated. No erythema or skin ulceration was presented at the site of the mass. Her remaining physical exam was otherwise grossly normal. 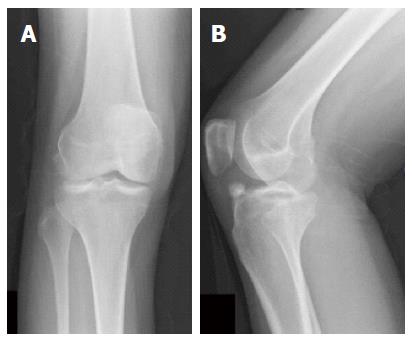 Figure 1 Initial radiographs of the right knee in the anteroposterior (A) and lateral (B) views.

Figure 2 Initial computed tomography images of the right knee in the axial (A), coronal (B), and sagittal (C) planes.

The patient underwent an open curettage and debulking of the right lateral proximal tibial lesion given its periarticular location, which prevented it from being amenable to marginal excision. Pathology revealed fragments of benign and reactive bone and cartilage consistent with a diagnosis of periosteal chondroma. The patient’s symptoms fully resolved post-operatively with no signs of recurrence at 1-year and 2-year follow-up.

Two and a half years later, the patient presented with a two and a half month history of recurrent pain and swelling of her right knee. Furthermore, under her well-healed scar was a firm, palpable mass that was larger than her original mass. CT (Figure 3) scan revealed a recurrent, sclerotic mass measuring 0.8 cm × 2.3 cm × 1.6 cm arising from the lateral tibial plateau consistent with recurrent intra-articular dysplasia epiphysealis hemimelica. A complete excision was performed and pathology showed sclerotic bone with overlying cartilage consistent with exostosis. At her one-year and two-year follow-up, the patient remains symptom-free with no appreciable mass recurrence.

Figure 3 Computed tomography images of the right knee after lesion recurrence in the axial (A), coronal (B), and sagittal (C) planes.
DISCUSSION

Dysplasia Epiphysealis Hemimelica is a rare, oftentimes aggressive outgrowth of bone and cartilage occurring most frequently in the epiphyseal region of long bones. Mouchet first described the lesion in 1926, referring to the entity as tarsomegalie to describe the pathology as a lesion about the ankle[10]. In 1950, Trevor described 8 cases involving epiphyseal lesions about the knee and ankle, terming them tarso-epiphysial aclasis[11]. He postulated that a congenital error in lower limb bud formation ultimately resulted in cartilaginous hyperplasia. Fairbank eventually coined the term dysplasia epiphysialis hemimelica in 1956 after publishing a case series on 14 children with the lesion[12]. DEH can resemble an osteochondroma due to its predilection towards children and developing bones and similar histologic appearance. However, osteochondromas are generally found in the meta-diaphyseal region, unlike DEH, which is typically an epiphyseal lesion[13].

Most lesions are discovered before 8 years of age[14]. The most common location for DEH is the talus, where it was originally described, followed by the distal femur and the distal tibia[14,15]. To our knowledge, only six reported adult-onset cases have been previously described in the literature, comprising less than 1% of known cases. As of a recent systematic review by Gökkuş et al[7], six adult cases have been described in the proximal femur, distal radius, carpus, distal tibia, proximal tibia, and talus[4-8,11]. The re-appearance of an adult lesion in the proximal tibia is a novel finding.

The recurrence rate of this osteocartilaginous overgrowth is unknown after surgical intervention. It is agreed upon that the gold standard for treatment of extra-articular lesions is surgical excision in the setting of pain or decreased range of motion, yielding more favorable outcomes[13,16]. The treatment for intra-articular lesions is less clear and determined on a case-by-case basis, with excision only indicated in the presence of symptomatic loose bodies, because of the detrimental effects of excision to the articular cartilage. Currently, only 1 recurrent case has been described in the literature; this patient was a child and had 3 operations all before the age of 5 years. In this case, a new-onset proximal tibial DEH in an adult patient recurred approximately 3 years after initial open excision. There were no known factors affecting recurrence in this one case. However, the presence of pain two a half months prior to the patient’s subsequent presentation may be explained by inadequate initial management, despite debulking and curettage that was deemed sufficient at the first attempt. We recommend that clinicians considering operative treatment for these lesions should note the potential for recurrence and should contemplate a more aggressive excision as a preventative measure. We also recommend that a post-operative follow-up period of several years may be warranted to identify lesions in the initial stages of recurrence.

In conclusion, DEH, although rare, does often require surgical resection once diagnosed based on symptoms and relevant imaging. Although more commonly occurring in children, it should remain in the differential diagnosis for adults with bony lesions in the epiphyseal region. Surgical resection is a viable option in the setting of pain and decreasing range of motion and must be balanced with the sequelae of destroying articular cartilage, however adequate follow-up is advised for potential recurrent lesions.

We thank Maureen Kaden and Francis Jennings for their assistance in gathering and organizing patient records. We also thank Cooper University Hospital (Camden, NJ, United States) for supporting to this work.

A 39-year-old female presented with a history of right knee pain, swelling, and instability.

A right knee effusion was present as well as lateral joint line tenderness, and a firm, palpable mass protruding from the anterolateral proximal tibia was easily appreciated.

Dysplasia epiphysealis hemimelica (DEH) is a rare, oftentimes aggressive outgrowth of bone and cartilage occurring most frequently in the epiphyseal region of long bones. DEH can resemble an osteochondroma due to its predilection towards children and developing bones and similar histologic appearance.

DEH is a rare, frequently aggressive outgrowth of bone and cartilage occurring most frequently in the epiphyseal region of long bones. The most common location for DEH is the talus, where it was originally described, followed by the distal femur and the distal tibia.

This entity is commonly mistaken for a neoplastic process due to its location and behavior. Clinicians considering operative treatment for these lesions should note the potential for recurrence and should contemplate a more aggressive excision as a preventative measure.

This paper is well written.