AIM: To evaluate the results of hip reconstruction with extensive excision for tumor confined to the femoral head and neck.

RESULTS: One patient with lymphoma died due to disease dissemination at 10 mo postoperatively and the remaining 6 patients were followed for a mean of 4.7 years (3 to 6 years). All patients were able to return to their daily activities and no patient had local recurrence. No radiographic signs of loosening, wear, and osteolysis were found at the last follow-up.

CONCLUSION: Trochanter/calcar-preserving resection of the proximal femur and reconstruction using conventional total hip prosthesis, is a satisfactory treatment for tumors confined to the femoral head and neck.

The proximal femur is a common site of primary malignant bone tumors, including chondrosarcoma, Ewing’s sarcoma and osteosarcoma[1]. An array of benign bone tumors; giant cell tumor, chondroblastoma, and clear cell chondrosarcoma may develop at the proximal femoral epiphysis and extend to the metaphysis[2-4]. Intra-articular involvement is rare in these tumors, although they might occur following a pathologic fracture.

Patients with tumors confined to the femoral head have been candidates for curettage-bone graft[5] or an extensive resection of the proximal femur and reconstruction, usually hemiarthroplasty, using tumor prosthesis depending on the biologic aggressiveness of the tumor[6-8].

The surgical treatment algorithm of tumors of the femoral head and neck at our department is as follows. The primary treatment for histologically-proven benign bone tumors confined to the femoral head and neck is curettage and bone graft[5]. However: (1) when there is a suspicion of malignancy or solitary bone metastasis; (2) when there is a risk of superior retinacular or lateral epiphyseal arterial damage during the curettage and consequent develop of osteonecrosis; (3) when the lesion is large and located at the subchondral portion of the femoral head apex and consequent collapse is expected after the curettage; and (4) when there is a local recurrence after the curettage, we perform a trochanter/calcar-preserving resection of the proximal femur and reconstruction using conventional hip prostheses.

Between June 2007 and December 2011, 20 patients were operated due to tumors of the femoral head and neck at the authors’ hospital. Among them, 13 patients were treated with curettage with bone graft (11 patients) or cement filling (2 patients). The remaining seven patients, who were operated with a trochanter-preserving resection of the proximal femur and total hip arthroplasty using conventional prosthesis, were subjects of this study.

We made preoperative diagnoses and evaluated the tumor extent on plain radiographs, computed tomography and/or magnetic resonance image. We planned a wide resection (≥ 1 cm from the tumor margin) bearing in mind the possibility of the malignant tumor (Figure 1). 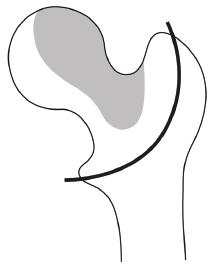 Figure 1 Preoperatively a wide resection margin was planned ≥ 1 cm from the tumor margin.

All THAs were carried out by one surgeon. The patient was placed in a lateral position on the operating room table. A longitudinal posterolateral incision was made. Trochanteric bursa and underlying fat tissues were removed to expose short external rotators and sciatic nerve. External rotators were cut at their tendinous attachments to the trochanteric crest and the posterior capsule of the hip joint was incised. The femoral head was dislocated posteriorly.

To remove the diseased femoral head and neck, preserving the greater trochanter and lower portion of the calcar femorale, we made a curved osteotomy in coronal plane from the tip of greater trochanter to lower level or below the lesser trochanter according to the tumor margin while usual osteotomy for primary total hip arthroplasty is made straightly at 0.5 inch above lesser trochanter. The posterior cortex and endo-osteal cancellous bone was cut using a 7 mm width osteotome and the anterior cortex was cut with use of a reciprocating saw (Figure 2). This osteotomy is similar to curved varus osteotomy, which has been use for the surgical treatment of femoral head osteonecrosis[15]. 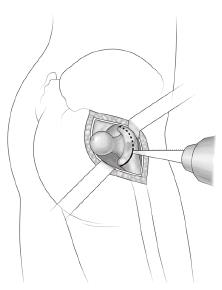 Figure 2 To obtain adequate resection margin from tumor, the curved osteotomy is performed from middle to lower portion of the lesser trochanter to the tip of greater trochanter.

On the inspection of the resected segment, no tumor showed a penetration into the joint or cortical invasion. Resected specimens were submitted for pathological evaluation.

The rest of the procedure was performed in the ordinary manner of cementless THA.

Two patients with malignant tumors underwent a computed tomographic scan of the chest and whole body bone scan, which revealed no evidences of distant metastasis. The patient with lymphoma was treated with adjuvant chemotherapy. Patients were instructed to walk with partial weight bearing with the aid of two crutches for four weeks after surgery.

Routine follow-up visits were scheduled for six weeks, three, six, nine, twelve months, and six months thereafter. Patients who had not returned for regularly scheduled visits were contacted by telephone.

Clinical evaluation was performed with use of the Harris hip score (HHS)[16], and the functional classification system of the International Society of Limb Salvage (ISOLS), which includes six functional parameters; pain, function, emotional acceptance, use of walking supports, walking ability, and gait. Each parameter is scored from 0 to 5 (a maximum score of 30)[17].

The radiographic evaluation was done to confirm if there was the evidence of recurrence; a newly discovered osteolytic or osteosclerotic lesion on follow-up radiographs or MRI.

Fixations of the acetabular and femoral components[18,19], ceramic wear[20] and osteolysis[21-23] were assessed on serial radiographs.

The design and protocol of this retrospective study were approved by the institutional review board in our hospital, which waived the informed consents.

Fracture of the greater trochanter occurred in one patient who was operated due to intraosseous lipoma. The fracture was detected on postoperative 6 wk radiographs. In this patient, the inner portion of the greater trochanter had been removed during the operation to achieve a wide resection and only a thin cortical portion had been left. This patient had no history of trauma, and had little pain postoperatively. Thus, the fracture seemed to be an avulsion fracture. It healed completely with protected weight-bearing for 3 mo and an osseointegration of the prosthesis was achieved (Figure 3). 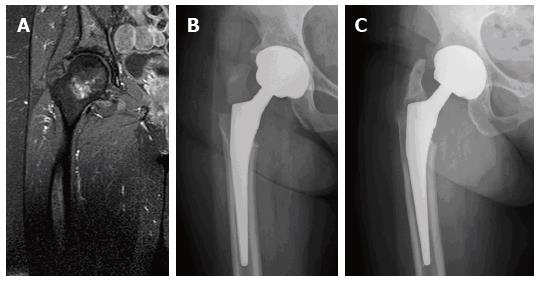 One patient with lymphoma recovered well and returned to his normal activity after the operation. The postoperative radiographs at 6 mo were uneventful. However, this patient died because of disseminated disease at the 10 mo postoperative.

The remaining 6 patients were followed-up for an average of 4.7 years (3 to 6 years). All patients returned to their daily activities and were walking with full weight bearing. At the last follow-up, the mean HHS was 98.0 points (range 96-100 points), and the mean ISOLS functional score was 29.2 points (range 28-30 points) (Table 1). During the follow-up there was no evidence of local recurrence. At the latest follow-up, there were no radiographic signs of aseptic loosening, wear, or osteolysis (Figure 4). 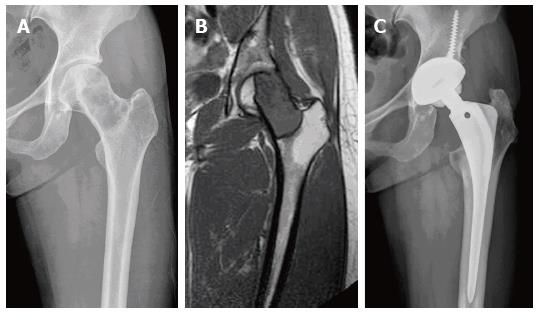 Figure 4 Radiographs of patient 1. A: Radiograph of a 36-year-old woman shows an osteolytic lesion confined to femoral head and neck; B: Preoperative magnetic resonance imaging shows a low signal intensity lesion with well-defined surrounding rim; C: Postoperative radiograph at 6 years after total hip arthroplasty with extensive excision at the intertrochanteric level shows no evidence of local recurrence and implant loosening or osteolysis.
DISCUSSION

However, problems have appeared after the use of cable grip. Silverton et al[24] reviewed 68 trochanteric osteotomies, which were repaired with Dall-Miles cable grip system (Howmedica, Rutherford, NJ). Trochanteric nonunion occurred in 25%, with fraying and fragmentation of the cable. Among the 51 patients with trochanteric union, 35% also had signs of fraying and fragmentation. Osteolysis around the cable was seen in 10%. Metallosis at the inferior border of the acetabulum were seen in 12%[24].

There were several limitations in our study. Our study was a retrospective review performed in a small number of cases. There was no control group of wide resection of the proximal femur and reconstruction using endo-prosthesis. However, the mean HHS (98 points) was satisfactory at last follow-up, which was comparable with that of primary THA[26]. Our procedure is applicable on the condition that the lesion was confined to the femoral head and neck. Therefore, a careful evaluation of tumor extent using MRI is mandatory preoperatively.

Our results of trochanter/calcar preserving resection and reconstruction using conventional total hip prosthesis were satisfactory. We would recommend this procedure as a primary surgical treatment along with curettage and bone graft for tumors confined to the femoral head and neck, especially in young patients.

Tumors confined to the femoral head have been treated by curettage-bone graft or tumor prosthesis following an extensive resection of the proximal femur according to the suspected pathology. When using tumor prosthesis with high cost, an extensive resection of the proximal femur leads to sacrifice of the greater trochanter or the insertion of the abductor muscle. In this study, the authors presented a trochanter/calcar-preserving resection and conventional total hip prosthesis in tumors involving femoral head and neck, and evaluated the outcomes.

This study contributes to presenting the surgical technique of total hip arthroplasty following trochanter/calcar-preserving resection in the selected patients.

In this study, trochanter/calcar-preserving resection was presented for patients with tumor confined to femoral head and neck. This technique does not require a sacrifice of greater trochanter which abductor muscles are inserted. This means that patients can preserve their abductor mechanism, even though surgery of proximal femur.

This study suggests that trochanter/calcar-preserving resection is useful for treatment in patients with tumor confined to femoral head and neck.

Calcar: The dense, vertically oriented bone present in the posteroemedial region of the femoral shaft inferior to the lesser trochanter of the femur.

The effort to reduce postoperative morbidity by preserving trochanter and calcar seemed to have yielded a good result.