Orthopedic implants are commonly used in spine surgery, arthroplasty, arthrodesis, as well for applications in treating fractures and nonunions[1]. Typically formulated from titanium, stainless steel, cobalt-chromium, or polyethylene polymers, orthopedic implants can serve as niduses for infection and may hinder infection clearance due to biofilm formation on the implant surface[2]. Orthopedic implant-associated infections are challenging complications which can lead to delayed healing, implant loosening, implant removal, amputation, or even death[3].

In many infections, bacteria will form a biofilm on the implant, increasing their resistance to antibiotics and resulting in infection persistence despite aggressive surgical debridement and prolonged antibiotic treatments[4,5]. A biofilm is an aggregated mass of bacteria that can form on the surface of an orthopedic implant, providing the ideal environment for bacteria to flourish. Such bacterial growths are difficult to eliminate and present a serious challenge in implant development[6,7]. In the United States, orthopedic implants are associated with an approximate 5% infection rate, representing 100000 infections per year[8]. This frequency represents a notable economic burden on both patients and health care providers. Although exact figures are elusive, even with the existence of antibiotic prophylactic it is estimated that implant infections increase the overall cost of hospitalization up to 45% on average[9,10].

Antibiotic coatings allow for local delivery of antibiotics with a sustained release based on the drug carrier pharmacokinetics[12]. While various antibiotics have been studied (e.g., amoxicillin, vancomycin, cephalothin, and tobramycin), the most widely studied antibiotic for such coatings has been gentamicin[11]. Common biocompatible drug carriers for the coatings include polymethylmethacrylate (PMMA), poly(lactic-co-glycolic acid) (PLGA), poly(lactic acid), polyethylene glycol, and poly(D,L)lactide (Figure 1)[7]. Hydroxyapatite (HA) was recently shown to be an effective drug carrier of gentamicin[13,14]. 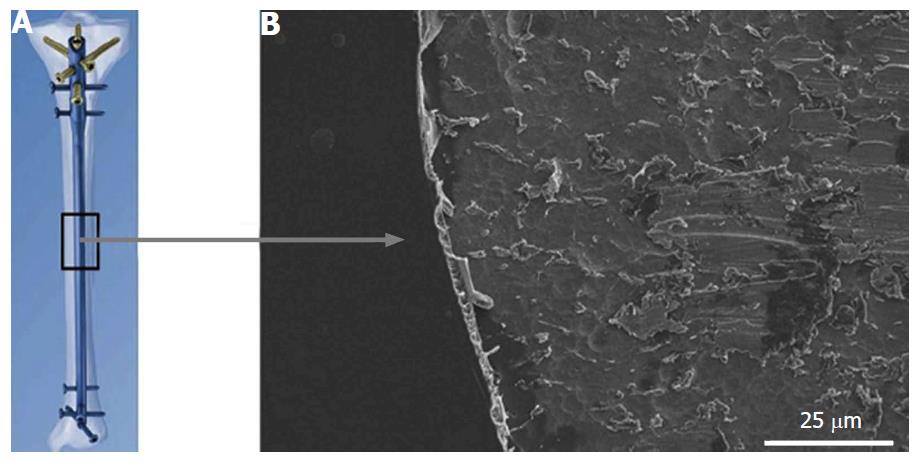 To overcome the limited duration of drug elution, Ambrose et al[22-24] developed antibiotic-impregnated bioresorbable microspheres for sustained release of antibiotics over several weeks-which have been shown to reduce infection rates in animal models. Antiseptic-based coatings have emerged to address antibiotic coatings fixed bactericidal spectrum and possible drug resistance limitations. Antibiotic-based coatings are currently the most commonly utilized local antimicrobial clinical delivery method due to the well characterized nature of the antimicrobial agents. These coatings are limited by antibiotic classes, which are compatible with the chemistry of the coating matrix. Asides from pharmacokinetic limitations, antibiotic-based coatings represent the most accepted antimicrobial option available.

In contrast to antibiotic coatings, which are formulated to work against specific bacterial strains, antiseptic-based coatings are intended to combat a wide range of bacteria by way of more general chemical agents. For this reason antiseptic coatings are less likely to induce bacterial resistance compared to antibiotics[25,26]. Common antiseptics include chlorhexidine and chloroxylenol, which are thought to act through the interaction of their natural cationic nature with the anionic phosphate residue of the lipid molecules in bacterial cell membranes. This ionic adsorption damages cell membranes and limits bacterial adhesion (Figure 2)[27,28]. In 1998, Darouiche[8] first demonstrated the effectiveness of antiseptic coatings on titanium cylinders studied in vitro with human serum before DeJong et al[29] tested chlorhexidine and chloroxylenol in a goat model, finding that these two antiseptics reduced external fixator pin tract infections. Ho et al[30] demonstrated in vivo efficacy of antiseptic coatings in humans by reducing vascular and epidural catheter infection with application of a chlorhexidine-impregnated dressing. Due to their broad spectrum efficacy, antiseptic-based coatings are not without some level of generalized toxicity. Because of their general toxicity, antiseptic based coatings are more commonly utilized as topical dressings. 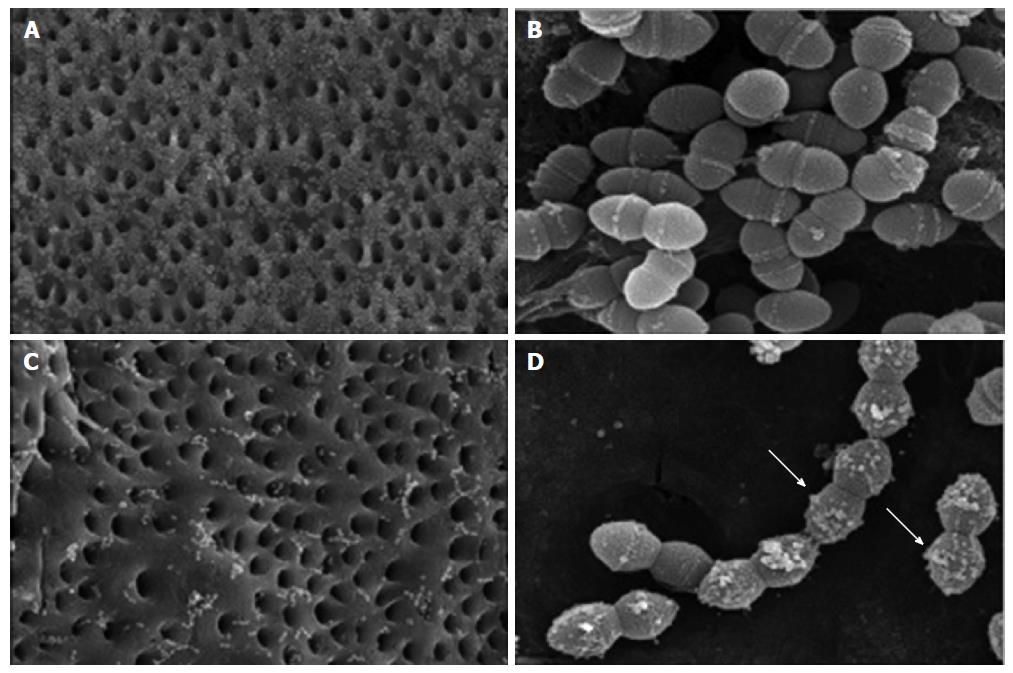 Chitosan is a polymer of chitin that exhibits active antimicrobial properties. Recent pre-clinical studies have provided evidence that several composites of chitosan may act as effective antimicrobial agents suited for titanium orthopedic implants. Yang et al[31] tested a vancomycin-chitosan composite by monitoring the proliferation of human osteoblast cells in vitro using methyl thiazole tetrazolium and cell adhesion using FEMSEM. They found that vancomycin-chitosan coated implants displayed lesser biofilm formation, a result corroborated by in vivo experiments in a rabbit model[31]. In fact, some results indicate that a simple mixtures of 2%-3% chitosan and 2% cinnamon oil may also hold antimicrobial properties against Staphylococcus epidermidis (S. epidermidis) on titanium implants[32]. Most recently, Qin et al[33] revealed preliminary in vitro results suggesting that chitosan-casein phosphopeptides coatings could provide antimicrobial benefits for cobalt matrix orthopedic implants. Other studies have suggested that chitosan alone may not be sufficiently potent as an antimicrobial agent and suffers from poor release kinetics. More current studies have focused on the synergistic use of chitosan and antibacterial agents with more promising results. As yet we are not aware of any clinical trials incorporating chitosan-based coats.

The antimicrobial properties of silver particles are well-established[34-38]. Silver particles have several known mechanisms of action including binding to thiol groups of enzymes, cell membranes, and nucleic acids, resulting in structural abnormalities, a damaged cell envelope, and inhibition of cell division[39-41]. Silver nanoparticles (Figure 3)[42] are typically incorporated into titanium surfaces or polymeric coating to control the release rate and duration of the bioactive silver[11,43-45]. Electrical currents are established when silver nanoparticles (cathode) embedded in a titanium matrix (anode) are exposed to electrolytes[45] - this galvanic coupling can cause changes in bacterial membrane morphology and DNA, leading to cell death[37]. Silver-based coatings have antimicrobial efficacy against a broad spectrum of pathogens, including Escherichia coli, S. aureus and S. epidermidis[46-48]. Using an in vivo model for osteomyelitis, Tran et al[48] inoculated S. aureus into fractured goat tibias and found after 5 wk silver-doped coated intramedullary nails led to better clinical and histology outcomes than the controls fixed with uncoated nails. 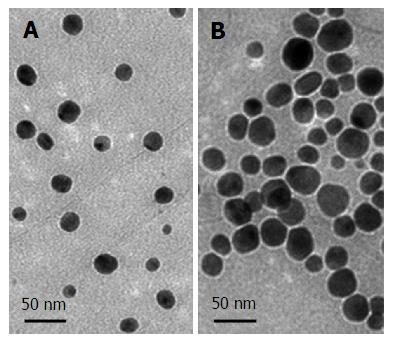 Figure 3 Silver nanoparticles of two sizes: Small (A) and Large (B), visualized via transmission electron microscopy[42].

Early clinical studies have shown promising results with regard to reducing periprosthetic infections. Wafa et al[49] retrospectively compared 85 patients with silver-coated tumor prostheses to 85 tumor patients with non-silver tumor prostheses. The authors found that the average infection rate among silver-coated implant patients was 10.6% lower than that of their uncoated counterparts. In a similar prospective study by Hardes et al[50], silver-coated prosthetic tumor implants were shown to have an 11.7% lower infection rate over a five-year period than uncoated implants. Despite these encouraging clinical results, clinical use of silver-coated implants has been limited by concerns of mammalian bone cell cytotoxicity[51,52]. While this cytotoxic level is much lower than the anti-microbial threshold used for implant coatings, there is evidence to suggest that prolonged exposure to even low doses of nano-silver may result in mild toxicity in rats[53]. The long-term implications of such toxicity are yet undetermined. Because of its long history of usage, and relatively low toxicity, silver-based antimicrobial coatings represent a very promising tool against antibiotic-resistant pathogens. The effectiveness of the technology has been shown to be largely dependent on the ability of the coating matrix to provide efficacious release kinetics and formulation of silver nanoparticles or ions.

Photocatalyst coatings are composed of titanium alloys and display bactericidal effects via membrane degradation after activating exposure to ultraviolet irradiation (Figure 4)[54,55]. Titanium oxide (TiO2) is a commonly used photocatalytic agent due to its strong oxidizing power, lack of toxicity, and long-term chemical stability[56]. Villatte et al[56] demonstrated TiO2-based photoactive coatings were able to withstand mechanical stress from inserting stainless steel pins in cow femurs, had antibacterial effectiveness against S. aureus and S. epidermis cultures, and has the added benefit of low cost and easy scalability. Photocatalysts as antimicrobial agents in orthopedic implants remain to be tested in vivo. 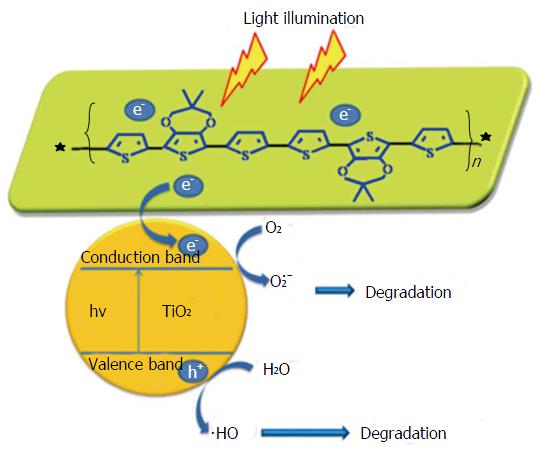 In addition to coatings, several other antimicrobial orthopedic implant technologies are being evaluated. Antibiotic-loaded bone cement (ALBC), such as PMMA, is widely used by orthopedic surgeons to help secure arthroplasty implants, to fill bone voids, and to treat vertebral compression fractures (Figure 5)[57,58]. ALBC has been in use since first being developed in 1970 as a potential method for in situ drug release[59]. Despite its widespread use, the antimicrobial efficacy of ALBC is debated[60,61]. Due to irregular release of antibiotic, only 5%-8% of the drug typically elutes properly[62]. Therefore, the high doses needed for a therapeutic effect have been shown to produce pathogen resistance[57].

A novel system utilizes antibiotic-loaded reservoirs within the steel implant itself to enable a more controlled, localized release of drug when compared to coatings[63]. Initial in vivo testing by Gimeno et al[64] demonstrated that sheep infected with a biofilm-forming S. aureus strain showed no signs of infection of pre-placed tibia implants 7-9 d post introduction of S. aureus. Gimeno et al[65] subsequently proposed a design detailing fixation pins with tubular reservoirs for loading of antibiotics, allowing for more controlled release of the antibiotic based on number and size of release orifices (Figure 6). 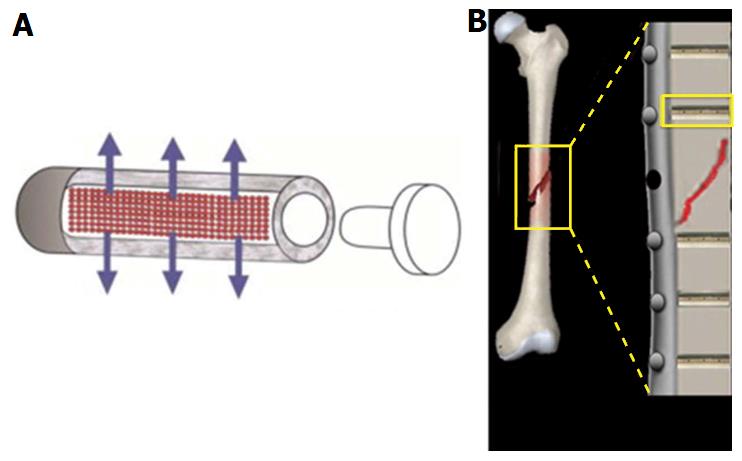 Modifying implant surface characteristics have are also been investigated as a means of reducing biofilm. For example, mixtures of polyethylene oxide and protein-repelling polyethylene glycol have shown significant bacterial inhibition when applied implant surfaces[66,67]. Singh et al[68] demonstrated that modifying surface roughness (Figures 7[69] and 8) of a material at the nanoscale level could provide antibacterial properties. Surface characteristic modification has been shown to interfere with osseointegration of the implants, challenging its clinical application[70]. Other studies have shown that certain pathogens are able to adhere, proliferate, and form biofilms more readily on rough surfaces. The data available suggests there is threshold where modified surface microtopography can be an effective means of reducing biofilm, or encouraging bacterial growth.

Electrospun matrices of PLGA nano-fibers have recently been proposed as a promising antimicrobial approach to orthopedic implant-associated infections[71]. In electrospinning, ultrafine fibers with nanometer diameters form a matrix with a very high surface-area-to-volume ratio[72]. Produced by syringe-pumping various drug and polymer solutions in the presence of a high electrical field potential[73], the resulting drug loaded, non-woven PLGA membranes are flexible, porous, and enable controlled drug release (Figure 9)[71,74]. Like coating, the matrices adhere directly to orthopedic implants. 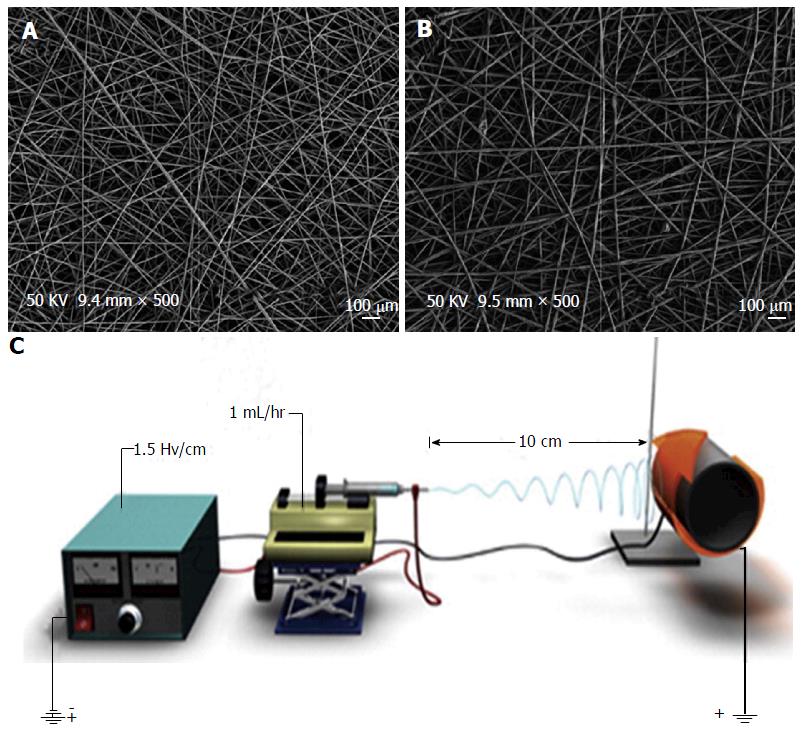 Özçelik et al[75] proposed a novel polyelectrolyte multilayer film approach using combined antimicrobial and immunomodulatory strategies (Figure 10). Composed of polyarginine and hyaluronic acid, the film inhibits the production of inflammatory cytokines, combats bacteria using a nanoscale silver coating, and opens the opportunity for bacteria-specific customization via embedded antimicrobial peptides. Although development of such films is far from clinical practice, microfilms are a promising look into the benefits of combining existing approaches for limiting implant-related complications to develop the composite technology of the future. 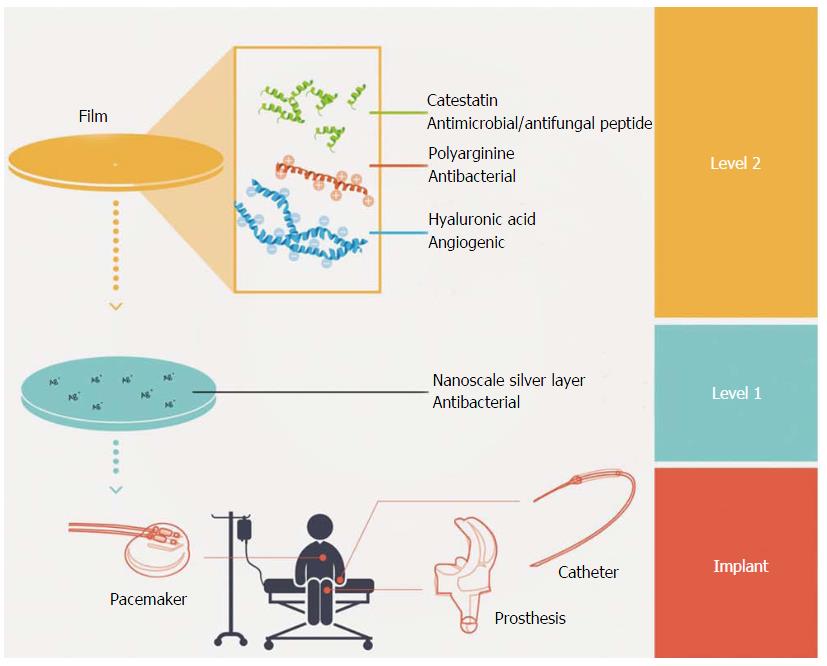 Figure 10 Integration of antimicrobial biofilms into the implant process[75].
CONCLUSION

Several imperfect options exist for reducing the risk of orthopaedic implant infections. Despite technological advancement, orthopedic implant-associated infections remain as an important clinical problem, necessitating additional improvement. With promising technology on the horizon, it seems that the answer for reduced infection may not lie in solely one device or technology but in the synergy of many.