Proximal symphalangism (SYM1B) (OMIM 615298) is an autosomal dominant developmental disorder affecting joint fusion. It is characterized by variable fusions of the proximal interphalangeal joints of the hands, typically of the ring and little finger, with the thumb typically being spared. SYM1 is frequently associated with coalition of tarsal bones and conductive hearing loss. Molecular studies have identified two possible genetic aetiologies for this syndrome, NOG and GDF5. We herein present a British caucasian family with SYM1B caused by a mutation of the GDF5 gene. A mother and her three children presented to the orthopaedic outpatient department predominantly for feet related problems. All patients had multiple tarsal coalitions and hand involvement in the form of either brachydactyly or symphalangism of the proximal and middle phalanx of the little fingers. Genetic testing in the eldest child and his mother identified a heterozygous missense mutation in GDF5 c.1313G>T (p.R438L), thereby establishing SYM1B as the cause of the orthopaedic problems in this family. There were no mutations identified in the NOG gene. This report highlights the importance of thorough history taking, including a three generation family history, and detailed clinical examination of children with fixed planovalgus feet and other family members to detect rare skeletal dysplasia conditions causing pain and deformity, and provides details of the spectrum of problems associated with SYM1B.

Core tip: This report highlights the importance of thorough history taking, including a three generation family history, and detailed clinical examination of children with fixed planovalgus feet and other family members to detect rare skeletal dysplasia conditions causing pain and deformity, and provides details of the spectrum of problems associated with SYM1B.

Proximal symphalangism (SYM1) is an autosomal dominant developmental disorder affecting joint formation[1]. It is characterized by variable fusions of the proximal interphalangeal joints of the hands, typically of the ring and little finger, with the thumb typically being spared. SYM1 is frequently associated with coalition both of the tarsal bones and the ear ossicles, resulting in conductive hearing loss[1]. This rare association was first reported by Cushing in 1916 and subsequently by Drinkwater in 1917 for the Brown and Talbot families respectively[2,3].

Here we present a British caucasian family with SYM1B caused by an autosomal dominantly transmitted heterozygous mutation in GDF5.

A mother presented to our orthopaedic outpatient department with her three children, predominantly for feet related problems. During clinical examination inability to flex the proximal interphalangeal joint of the little fingers was observed and subsequent radiographs revealed symphalangism of the proximal and the middle phalanges. All children and the mother had multiple tarsal coalitions and hand involvement in the form of either brachydactyly or fusion of the proximal interphalangeal joint of the little fingers. The clinical findings of the affected members are demonstrated in Table 1. The father was not clinically affected. The pain and foot deformity significantly impacted upon activities of daily living, limiting exercise capacity and restricting hand use for writing, for example. Hearing was tested and no loss was observed in this family.

DNA sequencing of the eldest son identified a heterozygous missense mutation c.1313G>T in GDF5, which causes the amino acid substitution arginine to leucine at codon 438 (R438L) which predicted to alter GDF5 signalling and therefore disrupt its function. This was demonstrated to be dominantly transmitted from his affected mother. There were no mutations identified in the NOG gene.

SYM1 is part of a spectrum of disorders that cause joint fusion. At the most severe end of this spectrum is the multiple synostoses syndrome (SYNS1), which causes severe and widespread joint involvement including the hips, vertebrae and the elbows[1,8].

Genetic mapping studies have shown that mutations in at least two genes underlie SYM1, NOG (SYM1A) and GDF5 (SYM1B). NOG maps to chromosome 17 and encodes the protein Noggin (NOG), a bone morphogenic protein (BMP) inhibitor expressed at the sites of joint development[1]. In the formation of the human skeleton BMPs induce mesenchymal cell proliferation and differentiation into chondroblasts, recruit chondrocytes and promote cartilage formation[1,9]. NOG inhibits cartilage development, leading to separation of the cartilage and thus joint formation[1,9]. NOG mutations lead to under expression of NOG resulting in high levels of BMPs, cartilage overgrowth and the absence of joint formation, which affects individuals with SYM1[1,8-11]. GDF5 encodes Growth and Differentiation factor 5, a protein belonging to the transforming growth factor beta superfamily which also has an important role in joint development. GDF5 acts in the same way as BMPs that promote chondrocyte differentiation and cartilage formation[1,4,5]. The GDF5 gene is on chromosome 20 and has two coding exons. The c.1313G>T (R438L) mutations in GDF5 has been previously detected in a family with SYM1[5] and the causative mechanism is thought to be increased biological activity of GDF5 leading to joint cartilage overgrowth and subsequent fusion[1,4,5]. GDF5 mutations associated with SYM1 and the allelic disorder SYNS1 are summarized in Table 2. The p.Arg438Leu substitution is a gain-of-function mutation known to be associated with proximal symphalangism[4]. Compared to wild type GDF5, the resulting protein shows increased biological activity that alters receptor-binding affinity within the TGFB signalling pathway. Overexpression of GDF5 disrupts normal joint formation and causes proximal symphalangism.

Hand involvement in patients with SYM1 prevents them from making a fist but does not usually cause significant impairment of functionality required for daily activities[1]. In the reported family the cause for attendance at the orthopaedic outpatient department was pain and stiffness as a result of tarsal coalitions and fixed planovalgus feet, in general, and not primarily due to hand problems, though restriction was impacting upon their ability to write comfortably. The mother had multiple targeted injections and subsequently developed subtalar joint osteoarthritis and underwent subtalar joint fusion (Figure 1). The other family members have been treated conservatively with orthotics and surgery will be considered at skeletal maturity (Figure 2). 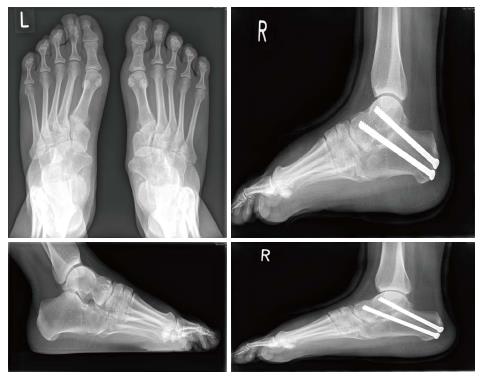 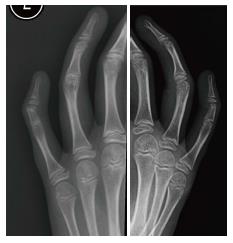 Figure 2 Radiographs of patient 2 (left) and patient 4 (right) demonstrating little fingers symphalangism of proximal a middle phalanx. Patients are unable to flex the proximal interphalangeal joint of their little finger as opposed to the other fingers as demonstrated.

To the authors’ knowledge, this is the first report of a British caucasian family with SYM1 associated with a GDF5 mutation. This case report highlights the importance of taking thorough clinical history and performing detailed clinical examination of patient’s and their affected relatives in establishing a diagnosis in children presenting with fixed planovalgus feet with a view to planning appropriate management. Clinical data from this and other families with SYM1 caused suggest that foot pain is the main medical problem for affected individuals and that hand dysfunction is uncommon Joint dysfunction can usually be managed by non-operative methods, but may occasionally require surgical intervention.

Painful flat feet in a mother and her children.

Radiographs of hands and feet confirming tarsal coalitions and symphalangism.

Guided by symptoms and in the form of orthoses, injection therapy and subtalar joint fusion in the mother.

This is an interesting case report, highlighting the importance of thorough history taking. It has great significance to clinical practice, so should be published.