Isolated subtalar dislocations are unusual injuries due to the inherent instability of the talus. Subtalar dislocations are frequently associated with fractures of the malleoli, the talus, the calcaneus or the fifth metatarsal. Four types of subtalar dislocation have been described according to the direction of the foot in relation to the talus: medial, lateral posterior and anterior. It has been shown that some of these dislocations may spontaneously reduce. A rare case of a 36-year-old male patient who sustained a closed medial subtalar dislocation without any associated fractures of the ankle is reported. The patient suffered a pure closed medial subtalar dislocation that is hardly reported in the literature. Six months after injury the patient did not report any pain, had a satisfactory range of motion, and no signs of residual instability or early posttraumatic osteoarthritis. The traumatic mechanism, the treatment options, and the importance of a stable and prompt closed reduction and early mobilization are discussed.

There are only few cases of patients with isolated dislocation of subtalar joint in english literature. This type of injury is extremely rare and usually there are associated fractures of the fifth metatarsal, the talus or the malleoli[1]. Rarity of this injury can be attributed to the presence of strong ligament connecting the talus and the calcaneus, the strong biomechanical properties of the ankle and the tight joint capsule[2].

Calcaneus and the rest foot can dislocate medially, laterally, posteriorly or anteriorly in relation to the talus. The dislocation results in substantial distortion of the foot shape. Fractures of the fifth metatarsal, the talus, and the malleoli are often encountered with subtalar dislocation[3]. Patients with bone or soft tissue dysplasia or impaired function of the ankle joint are more likely to suffer from isolated Subtalar dislocation[4]. Aplasia of the ankle ligaments or the calcaneus facets, hypoplasia of the maleolus, recurrent ankle sprains causing posttraumatic ligamentous insufficiency, and atrophy of the peroneal muscles predispose to this specific injury pattern.

Subtalar dislocations without associated fracture are rare because of the inherent instability of these types of injuries (the talus has two articular surfaces which contribute in the formation of talonavicular and talocalcaneus joints)[5]. It has also been demonstrated that injury in this area can easily dislocate the subtalar joint. In most of the cases the calcaneus and the rest foot is dislocated medially. Dislocation can be reduced spontaneously[4]. Most of these trauma patterns are missed because radiographs are normal with no evidence of previous injury. The majority of these patients will admit in the emergency department with an open injury, displaced malleolar fractures, and significant soft tissue impairment[4].

The purpose of this study is to report a rare case of an isolated subtalar dislocation. We also describe the mechanical patterns resulting in subtalar dislocation and give prominence of the improved outcomes after immediate closed reduction and fast rehabilitation program.

A 36-year-old male patient was admitted to the emergency room after a fall while climbing on a mountain. The patient was complaining for significant pain in his left ankle. Deformity and swelling in the left ankle were noticed. More specifically, the ankle was found in medial plantar flexion, had a diffuse swelling, abrasions, and local ecchymosis (Figure 1). The patient was hemodynamically stable without any associated injuries. 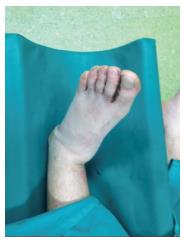 In the lateral aspect of the joint a bony prominence was noticeable. Due to the soft tissue swelling there were no palpable arteries. However nail capillary refill test indicated undamaged circulation. Sensation of light touch was intact and the two point discrimination test within normal limits.

Radiographic evaluation showed displacement of the calcaneus and of the rest foot in relation to the talus. Calcaneus was dislocated medially in the anteroposterior view. Calcaneus was located in neutral position in the lateral view. Plain films did not reveal any associated fracture (Figure 2). A computed tomography (CT) scan with 3D reconstruction confirmed the isolated dislocation of the talonavicular and talocalcaneal joints (Figures 3-5).

Figure 2 X-rays of the left ankle. Dislocation of the talonavicular and talocalcaneal joints with no obvious fracture is shown. The calcaneus is displaced in medial position in the anteroposterior view. A: Lateral view; B: Anterior posterior view. 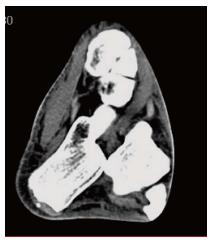 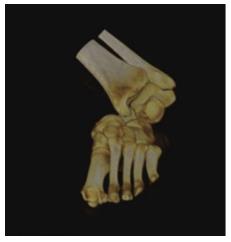 Figure 4 Computed tomography scan with 3D reconstruction image in the coronal plane showing the medial subtalar displacement of the calcaneus with the rest foot. 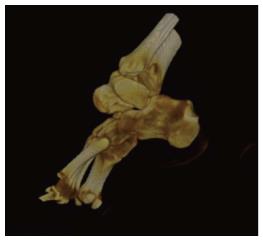 Figure 5 Computed tomography scan with 3D reconstruction image of the patient΄s ankle joint that demonstrates the dislocation of the talocalcaneus joint and the absence of a fracture.

A closed reduction under sedation was attempted in the emergency room. Despite the copious manual traction of the foot with the knee flexed and the application of eversion force on the foot with simultaneous plantar flexion of the ankle initially and dorsiflexion finally, no reduction could be obtained.

The patient was then brought to the operating room and an attempt for reduction was performed under general anesthesia. The reduction was confirmed fluoroscopically (Figure 6).

Figure 6 Radiographs of the left ankle after reduction and immobilization with a posterior splint. A: Lateral view; B: Anterior posterior view.

After reduction, the dorsalis pedis and posterior tibialis pulse were palpable. The leg was immobilized in a posterior splint initially for 3 d and in a short-leg cast after that for 4 wk. The patient underwent a CT after the reduction that revealed no osteochondral fractures or intraarticular free bodies (Figure 7). Soft tissue swelling was resolved 3 d after reduction.

Figure 7 Computed tomography scan with 3D reconstruction images after reduction. There are no intraarticular free bodies. A: Coronal plane; B: Sagittal plane.

The patient started a mobilization protocol with progressive passive and active range of motion exercises 4 wk after reduction. At that time, partial weight bearing was initiated. The patient was instructed to bear his full weight at about 10 wk after the injury.

Only 33 studies describing a total of 439 patients with closed, isolated subtalar dislocation have been reported in literature. Most of the patients (85%) were treated conservatively with closed reduction under general anesthesia and immobilization with a short leg cast for 3-6 wk. The intermediate results were described as good to excellent[13-17]. Jungbluth et al[12] reported good results in 21 out of 23 patients with isolated subtalar dislocation and satisfactory results for the rest 2 of the patients after conservative treatment. They also noticed no difference between the outcomes of medial and lateral subtalar dislocations despite the fact that literature suggests that lateral dislocations have poorer prognosis than medial[1]. Heppenstall et al[18] reported excellent results in 14 out of 19 patients after closed reduction. In 10%-32% of lateral dislocations treated with conservative treatment, the results were inadequate.

The duration of immobilization remains controversial. In complicated dislocations an initial immobilization by means of posterior splint is recommended. In this way, a more safe way of monitoring the condition of the skin and soft tissue envelope is achieved[6]. In cases of successful closed reduction, a non-weight bearing short leg cast is applied for four weeks. After this four-week-period, gradual mobilization and return to daily activities is recommended. Even though there are studies supporting that a shorter period of immobilization (i.e., 3 wk) may lead to better results, many authors recommend immobilization for more than 4 wk assuming that 4-wk-period is insufficient time for healing[2,4,19]. Subtalar joint stiffness in cases of immobilization for less 4 wk is minimal[2]. Lasanianos et al[20] suggested that for uncomplicated medial subtalar dislocations, if passive and active range of motion exercises and partial weight bearing are started earlier, the outcomes regarding functionality are better when compared to those of longer immobilization periods. In the present study, the lower limb was immobilized in a short leg posterior splint .The patient was bedridden for the first days and his foot was in an elevated position. The posterior splint was removed 3-4 d after reduction and after subsidence of the swelling. A short-leg cast was applied and mobilization without weight bearing was started. Three weeks after injury, active range of motion exercises were initiated. Partial weight bearing was started after the third week, and gradually progressed to full weight bearing at five weeks after the reduction. Mobilization after the third week was achieved using a short leg functional boot that allowed ankle motion except from inversion and eversion.

Excellent outcomes can be achieved if 3 conditions are fulfilled: (1) low energy forces are applied on soft tissue envelope during injury; (2) a prompt reduction is performed; and (3) immobilization is applied for as hort period of time[20]. Long-term complications are posttraumatic arthritis (usually of the subtalar, the talonavicular or the tibiotalar joint), osteonecrosis of talus, and subtalar joint stiffness[21]. Eventually 80% of subtalar dislocations will demonstrate a small reduction of the subtalar and/or ankle range of motion, while in 50%-80% of subtalar dislocations there will be subtalar arthritic changes in X-rays[18]. The incidence of posttraumatic osteonecrosis of the talus ranges from 10% to 29%[22]. In this direction, Jarde et al[23] found that 3 out of 35 patients developed talar osteonecrosis one year after injury. Evaluation for possible vascular damage is essential. If there are clinical signs of ischemia, impalpable pulses, negative nail capillary refill test or low oxygen saturation measured by pulse oximetry after reduction, it is recommended to perform further imaging studies. CT angiography or Doppler sonography may demonstrate vascular impairement. The rate of vascular damage after this type of injury has not been studied in literature.

Posttraumatic fibrosis of the periarticular soft tissue envelope due to high energy forces is the main cause of ankle joint stiffness. These forces except from soft tissue fibrosis will not result to degenerative changes[11]. As many authors[1,4,7,21] suggest, subtalar joint stiffness in subtalar dislocations can be avoided by reducing the duration of immobilization. Less than 4 wk of immobilization of isolated dislocations, or less than 6 wk in dislocations associated with fractures will result in better functional outcomes.

In summary, isolated subtalar dislocations occurs with an extremely low incidence rate. In cases with successful closed reduction and no signs of remaining instability conservative treatment can prove beneficial. The limb should be immobilized in a short leg splint and early mobilization should be allowed to achieve full range of motion without pain.

A 36-year-old male patient presented with significant pain, deformity, swelling in the area, and local ecchymosis in his left ankle after a fall while climbing on a mountain.

Plain X-rays, computed tomography scan with 3D reconstruction showed medial displacement of the calcaneus and of the rest foot in relation to talus.

The patient after a failed attempt for reduction in the Emergency room, was brought to the operating room and under general anesthesia the dislocation was reduced closely. A posterior splint was applied for 4 wk.

Very few cases of isolated subtalar dislocations have been reported in the literature.

Isolated subtalar dislocation is the dislocation of talonavicular and talocalcaneal joint without any associated fractures. Calcaneus and the rest foot dislocate medially, laterally, posteriorly or anteriorly in relation to talus.

This case report represents an isolated subtalar joint dislocation. Immediate reduction and short immobilization period may result in an excellent outcome for this type of injury.

The study presents an interesting case of isolated subtalar dislocation and it deals with a rare topic with a nice work up of the literature.