METHODS: A systematic review of previously published studies accessible through PubMed was performed. Only articles in English journals or published with English language translations were included. Level of evidence of the selected articles was assessed. Statistical data was calculated with analysis of variance with P < 0.05 considered statistically significant.

Minimally invasive surgical (MIS) approaches to lumbar spinal surgery have been an area of increasing clinical interest for over 50 years. Percutaneous approaches to lumbar disk herniation began with chemonucleolysis treatment for sciatica by Smith[1] in 1964. In 1997, Smith[1] and Foley et al[2] introduced the tubular distraction system for a microendoscopic approach to microdiscectomy. This system allowed direct visualization of the surgical field while minimizing dissection and distraction of the paraspinal muscles and thoracolumbar fascia. By reducing the size of the operative field and reducing the number of damaged blood vessels, muscles and fascial structures, blood loss and post-operative pain would be reduced, leading to a shorter hospital stay, faster time to mobilization, and reduced post-operative analgesia needs.

The initial hope that MIS approaches to the lumbar spine would lead to long-term reductions in patient-reported pain relative to open approaches has not yet been substantiated. Most studies of long-term results have reported similar outcomes between MIS and traditional open surgeries[8-10]. This leaves short-term measures, specifically perioperative outcomes, as the main possible distinguishing clinical feature between MIS lumbar spinal surgery and open surgical technique. There have not been any systematic reviews specifically focusing on perioperative outcomes across minimally invasive lumbar spinal surgical modalities, nor have there been systematic reviews of either minimally invasive laminectomy or far lateral fusion approaches. 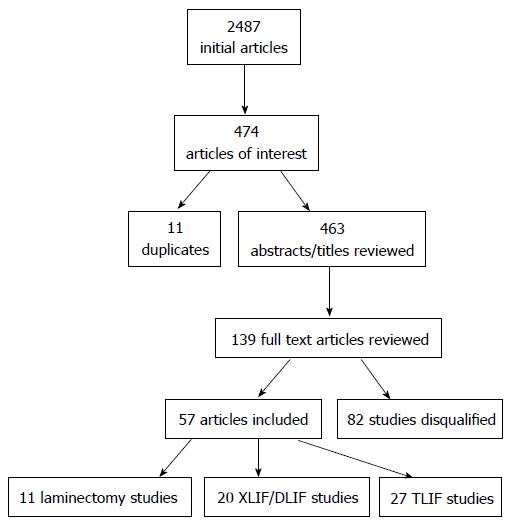 Studies were only included if they categorically used “laminectomy” for all subjects. Kinoshita et al[11] performed laminotomies for single level decompression, and sometimes performed laminectomies for multiple level decompression. It can be argued that laminotomy vs laminectomy is a distinction without a difference, but including laminotomies would then bring a number of microdiscectomy techniques into the range of covered studies. As this would introduce significant heterogeneity into the category, only studies describing laminectomy as part of the decompression surgery were included in the laminectomy category.

TLIF studies were included regardless of whether bilateral or unilateral instrumentation was used. Only studies with both an open TLIF and an MIS TLIF arm were included. Studies that compared MIS TLIF with posterior lumbar interbody fusion (PLIF) or did not report TLIF and PLIF results separately were excluded.

Results were tabulated by intervention, indication for intervention, data by study arm, and relevant qualifications (bias, observer status, etc.) gathered. Multiple reports of the data from the same patient population were disregarded. Data from similar studies was pooled and calculated with analysis of variance (ANOVA). Numerical data that was reported stratified into subgroups other than MIS/non-MIS, were re-pooled and calculated with ANOVA. Numerical data only reported in graph form were incorporated using graphical methods. Durotomy and cerebrospinal fluid leak were included as reportable neurologic complications. Incorporation of isolated additional neurologic complications resulted in some study groups having complication rates above 100%. In order to summarize data across studies, joint statistics were calculated using ANOVA. The statistical review of this study was performed by a biomedical statistician.

Three studies specifically examined rates of post-operative pain in these patient groups. Watanabe et al[16] examined the visual analog scale (VAS) score for post-operative wound pain on post-operative day 7 and found a VAS of 16 (± 17) for MIS patients and a VAS of 34 (± 31) for open laminectomies, a statistically significant difference (P = 0.04). Mobbs et al[17] examined post-operative narcotic use during hospital stay and found an intravenous morphine equivalent of 9.3 mg in MIS patients and 42.8 mg in open patients, a difference of unknown statistical significance (P value not stated). Komp et al[21] reported that “no operation-related pain medication was required” in their MIS case series.

No studies reported a need for transfusions following either MIS or open laminectomy.

No randomized trials using an ALIF control arm were identified in the literature search. One RCT had XLIF as part of the intervention in both the study arm and control arm groups[25]. Two studies mixed traumatic and/or post-infectious patients in the study population; as these indications were in the minority in each of these studies, the studies were included[13,26].

Identified pertinent studies are shown in Table 3, including four cohort control studies and 15 case series. In Table 4, results for length of surgery, EBL, rate of neurologic complications, and LOS are shown. In the authors’ opinion, the current non-randomized data does not justify pooling or a meta-analysis due to heterogeneity and potential bias. Only one study (Huang et al[29]) was a prospectively designed and enrolled study; and, it used an approach (minimal access ALIF) that has not been repeated in any other study.

Within the reported data for MIS anterior fusion approaches, average length of surgery varied from 27 min to 295 min, average EBL from “not measureable” to 572 mL, and neurologic complication rates varied from 0% to 130%.

Three non-controlled studies reported on perioperative pain and narcotic use in patients treated with lateral interbody fusion. Ruetten et al[30] reported a mean VAS back of 4 (out of 100) and a VAS leg of 14 (out of 100) on post-operative day 1, stating that no post-operative pain medication was required in their 463 patient series. Marchi et al[35] reported mean VAS back of 45 and VAS leg of 31 one week following surgery, while Pimenta et al[40] reported a combined VAS Back/Leg value of 50 at the same time point.

Virtually all of the data gathered involved application of the XLIF (NuVasive, San Diego, California, United States) system; there is at this point limited data on other systems.

In decompressive laminectomy, this study found the muscle-sparing MIS approach to result in significantly longer operative times compared to the open approach (177.5 min vs 129.0 min, P = 0.004). Although decompressive lumbar laminectomy is a relatively straightforward spinal operation, there exists a steep learning curve associated with microscope-assisted tubular spinal surgery[68], which could be one important factor accounting for the differences in operative times between the two techniques. With the growing popularity of minimally invasive approaches and the growing number of younger surgeons performing minimally invasive approaches, over time, as younger surgeons become more proficient with MIS techniques, operative times will likely decrease and we could see a decrease in the difference in operative times between MIS and open lumbar decompressions.

This study also found that patients undergoing MIS decompression were found to have less postoperative pain, lower perioperative transfusion rates and decreased LOS compared to those who underwent open decompression. These findings are not surprising given that the MIS technique results in significantly smaller surgical incisions, is muscle sparing and bypasses the need for extensive paraspinal and soft tissue stripping.

In terms of perioperative outcomes following lumbar decompressive laminectomy, there is a state of equipoise between MIS and open approaches, with neither technique clearly superior. At this time, individual patient and surgeon preferences are appropriate to guide decision making until further evidence becomes available.

Lumbar interbody fusion has become a popular surgical tool in the treatment of a wide variety of lumbar pathology including degenerative disc disease, recurrent lumbar herniation, spondylolisthesis and complex lumbar stenosis[69]. Currently popular approaches for achieving lumbar interbody fusion include the open anterior (ALIF) and MIS lateral (DLIF and XLIF) retroperitoneal approaches and the open and MIS posterior transforaminal (TLIF) approaches. While each one of these approaches utilizes a different anatomic corridor, they all have a common end goal of achieving interbody fusion. However, approach specific limitations and direct and indirect complications make each one of these approaches unique and worthy of comparison.

There are currently no randomized trials comparing ALIF and DLIF/XLIF in the literature. There is a wide variation in the reported outcomes data between MIS and open approaches for ALIF and DLIF/XLIF and this heterogeneity does not allow for meta-analysis of the current literature due to the high risk of potential bias. Furthermore, all of the currently available literature on lateral approaches involves the use of a single commercial system (XLIF, NuVasive, San Diego, California, United States) while there are currently many different commercial systems in use across the country.

There is currently a dearth of high quality literature on MIS alternatives (DLIF, XLIF) to ALIF. Although there appears to be no evidence of inferiority, these approaches should be considered investigational by surgeons and patients until better quality studies justify evidence-based statements of non-inferiority.

There have been several high quality studies in the literature comparing MIS TLIF and open TLIF surgeries. In terms of EBL, LOS, transfusion need and perioperative pain, the current data all favor MIS TLIF.

LOS was found to be significantly reduced in MIS TLIF by almost three days, however all of the studies originated from Chinese hospitals. LOS effect estimates, however, may not be applicable across countries, as different health systems use different discharge qualifications and have appreciably different LOS for similar procedures.

There are no outcome categories reported that identify MIS approaches to be significantly worse. Based on current data for perioperative outcomes, it appears that MIS approaches are superior to open approaches in TLIF.

Currently, there exists a wide variation in reported perioperative outcomes in both open and MIS lumbar spine surgery in the literature. Although multiple different outcomes are being reported there exists a lack of defined criteria for many of the reported outcomes such as hospital LOS, postoperative narcotic utilization and need for perioperative transfusion. Furthermore, none of the currently published literature used independent observers when reporting outcomes such as EBL and neurologic complication, leading to the risk of complication under-reporting due to the self-reporting nature of the outcomes data collection.

Outcomes research in spine surgery has become a very important and highly prioritized area of research with the primary focus of minimizing cost while maximizing outcome.

This is the first study evaluating perioperative outcomes, comparing minimally invasive approaches and techniques vs open surgery in the treatment of degenerative lumbar spine disease.

The authors present us a comprehensive systematic review regarding short term outcomes following minimally invasive lumbar spine surgery. This topic is of interest and of novelty.