METHODS: Between 2010 and 2012, a prospective study was conducted on 49 geriatric patients, who took antiplatelet agents, sustained FNF and underwent surgery within 72 h [early surgery (ES) group], and these were compared with a retrospective consecutive case series of patients with similar characteristics (45 cases) who had delayed surgery (DS group) after 72 h during an earlier 3-year period. Postoperative outcomes were followed for one year and compared.

RESULTS: There were non-significant differences in perioperative blood loss, blood transfusion, intensive care unit requirement and postoperative mortality (P > 0.05 all). There were 2 patients (4%) in the DS group who died after surgery (P = 0.23). However, the ES group showed a significantly better postoperative outcome in terms of postoperative complications, length of hospital stay, and functional outcome (P < 0.05 all).

CONCLUSION: Early hip surgery in geriatric hip fracture patients with ongoing antiplatelet treatment was not associated with a significant increase of perioperative blood loss and postoperative mortality. Moreover, ES resulted in a better postoperative surgical outcome. In early hip surgery protocol, the antiplatelet agents are discontinued and the patient is operated on within 72 h after admission, which is safe and effective for the medically fit patients.

Core tip: In this cohort controlled study, a prospective study was conducted on geriatric femoral neck fracture patients, who took antiplatelet agents, and underwent hip replacement within 72 h which was compared with a retrospective case series of patients with similar characteristics who had delayed surgery. Our results supported the benefits of early surgery on these high surgical risk elderly patients in terms of significantly better postoperative complications, length of hospital stay, and 1-year functional outcome without significant difference in perioperative blood loss and postoperative mortality.

Recent studies have shown that early surgical intervention in elderly hip fracture significantly reduces postoperative mortality and morbidity, and increases the proportion of patients recovering to pre-injury ambulation status[1-3]. However, postoperative mortality and morbidity risk is different in an individual geriatric patient due to many other associated factors, such as comorbidities and medical conditions, perioperative blood loss, the necessity of blood transfusion, and postoperative complications[4-6]. Therefore, the effect of early surgery (ES) in a subgroup of patients who have multiple comorbid diseases and high risk for perioperative blood loss, such as elderly patients taking antiplatelet agents, could be different from a general elderly population who had no significant comorbidity[7,8]. This patient subgroup with comorbidities requires specific perioperative management to avoid the bleeding-related complication (from impaired platelet function) and thrombotic complications (from prolonged drug withdrawal). Although the safety of early hip surgery in patients taking anti-platelet medications has been introduced[9], the true benefit of it in geriatric hip fracture patients who need hip replacement surgery is still debatable[10-19]. This is because most of the previous studies were retrospective studies with small sample size or had mixed type of fracture and operation[10-13], and used patients without anti-platelet medications as a control group[13-19].

Nevertheless, current scientific evidences have demonstrated that more than 50% of platelet function will already have returned after drug withdrawal for at least 48-72 h[20,21], so considered safe for hip surgery[22]. To our knowledge, there still is no universal guideline for management of hip fracture patients taking antiplatelet agents, and whether the patients should continue or stop these drugs during the perioperative period[23-25]. We assumed that ES with short drug withdrawal (< 72 h) should result in a comparable perioperative blood loss and other better postoperative outcomes compared with delayed surgery (DS) with prolonged drug withdrawal. The aim of this study was to compare the outcomes between ES with short drug withdrawal (< 72 h) and DS with prolonged drug withdrawal (> 72 h) in elderly femoral neck fracture (FNF) patients who received preoperative antiplatelet medication and underwent hip replacement in terms of blood loss and bleeding-related complications, postoperative mortality, morbidity, and functional outcome.

This study was designed as a single-centered, prospective cohort study, between 2010 and 2012, which was compared with a retrospective consecutive case series within the same center from an earlier 3-year period (2007-2009). The prospective arm directly followed the retrospective arm when the study was initiated. Before the introduction of this study, our hospital guideline indicated that patients should have had their antiplatelet agents stopped for at least 5 d before operation. Patients, after the study protocol introduction, stopped their antiplatelet agents after admission and then were operated on within 72 h after admission (Figure 1). The inclusion criteria were: (1) patients aged 60 years or older with displaced FNF from low energy trauma and planned for hemiarthroplasty; (2) previously taking at least one antiplatelet agent or more; (3) having high surgical risk with American Society of Anesthesiologists (ASA) physical status[26] grade 3 or more; and (4) having stable medical condition and able to perform early surgical intervention within 72 h after admission. The exclusion criteria were: (1) other pathological fracture such as malignancy or stress fracture; (2) concomitant fractures; and (3) undertaking anticoagulant therapy such as warfarin. Prior approval was obtained from our institutional board review, and informed consent was obtained from all prospective patients, who participated in this study, before the surgery was scheduled. 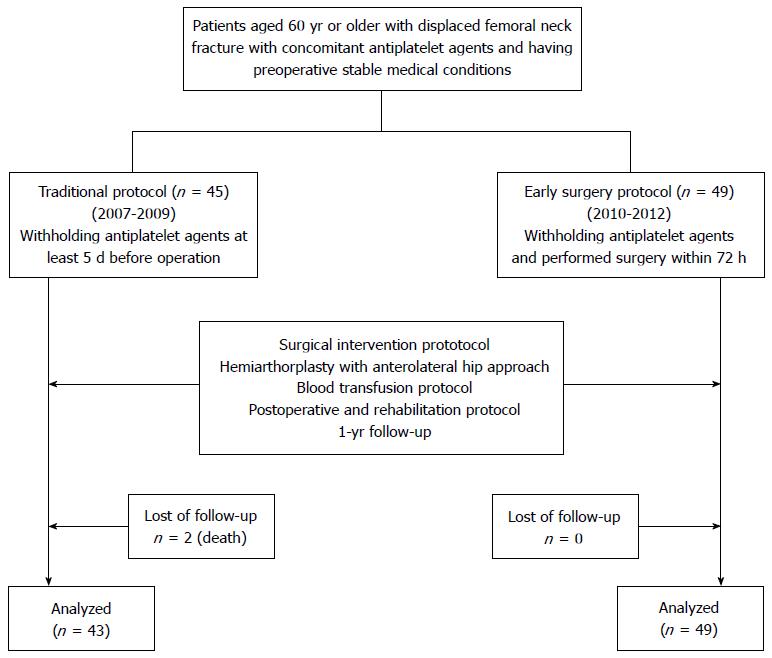 Figure 1 Flow diagram of the study; patients in the early hip surgery protocol stopped the antiplatelet agents after admission and then were operated within 72 h after admission compared with the patients in the delayed hip surgery protocol who stopped the antiplatelet agents at least 5 d before the operation.

All patients were treated with hemiarthroplasty, performed by one or more trauma experts, using the same surgical approach which was anterolateral hip approach with anterior hemimyotomy[27]. The decision on hip prosthesis, cemented or cementless femoral stem, was based on proximal femur morphology. The choice on anesthetic technique, general or regional anesthesia, depended on the anesthesiologists. Blood transfusion protocol followed ASA guideline, and packed red cell transfusion was considered when Hb was less than 6 gm% or the patient had positive anemic symptom (dyspnea, tachypnea and hypoxemia)[28].

Sample size estimation was calculated by using data on actual perioperative blood loss from the retrospective controlled arm (mean blood loss ± SD = 507 ± 250 mL). We assumed that the significant difference in blood loss should exceed 30% (152 mL) compared with control group. Setting the pre-study power of pre-study power of test as 0.8, significant difference as 0.05, and the ratio of sample size in each group as 1:1, gave the sample size of each group was 43 patients.

The statistical methods of this study were reviewed by Patarawan Woratanarat, MD, PhD (Clinical Epidemiology) from Department of Orthopedics, Faculty of Medicine Ramathibodi Hospital, Mahidol University.

There were 49 patients included into the ES group (42 aspirin group and 7 clopidogrel group), and 45 patients included into the DS group (36 in aspirin group and 9 in clopidogrel group) (Figure 1). Demographic data were shown in Table 1. The mean time to surgery was 1.6 ± 0.9 d in ES group compared with 8.9 ± 3.6 d in DS group (P < 0.001). There were non-significant differences in age, gender, BMI, fracture side, number of comorbid diseases, ASA physical status, type of antiplatelet agents used, preinjury ambulation status, preoperative laboratory value, anesthetic technique, and operative time between both groups (P > 0.05 all). However, the ES group showed significantly higher preoperative hemoglobin, lower platelet count and higher proportion of patients receiving cementless hemiarthroplasty compared to DS group (P < 0.05 all).

Hip fracture is a common injury in elderly population leading to significant mortality and morbidity. Generally, this condition requires an urgent diagnosis and prompt surgical treatment, as early as possible, in order to reduce postoperative mortality, morbidity, and improve functional outcome[1-3]. However, geriatric patients have a wide range of comorbidities and are increasingly taking anti-platelet medication for treatment of their existing medical comorbid diseases or for medical prevention[31-33]. However, uninterrupted antiplatelet medication while undergoing early hip surgery would increase surgical bleeding and bleeding-related complications[10,12,16,17,19], whereas prolonged drug withdrawal would result in higher mortality and morbidity from DS and risk of lethal complications related to a rebound effect such as acute coronary syndrome and thromboembolic complication[4,34-37]. Moreover, though the safety of ES in the patients undertaking antiplatelet agents has been introduced[9], there is still no universal guideline for perioperative management for this subgroup[23-25] and the exact benefit of ES on postoperative outcomes in these patients is still unknown. Recent studies have demonstrated that stopping these drugs at least 48-72 h was sufficient for improving platelet function and safe for hip surgery[20-22]. Moreover, the peaked incidence of acute coronary syndrome, due to the rebound effect, occurred between days 4 and 8 after withholding antiplatelet medications[37]. Therefore, our study aimed to evaluate the outcomes after early vs delayed hip replacement surgery with drug withdrawal protocol in elderly patients who had displaced FNFs with ongoing anti-platelet agents to clarify the safety of ES with shorter drug withdrawal strategy in this subgroup of geriatric hip fractures.

Our study showed that most demographic data was comparable between the ES and DS groups (Table 1). However, the proportion of cemented hemiarthroplasty was significantly higher in the DS group which should be from the tendency to shift of hip replacement in elderly patients from cemented hip replacement to cementless hip replacement in recent years[38]. We also found that the preoperative hemoglobin level was higher in the ES group, which might be explained by ongoing blood loss in DS compared to ES, which resulted in improved functional recovery in the ES group[39].

The results from this study showed that all perioperative blood loss parameters (intraoperative, drainage, TABL, and CTBL) and blood transfusion were not significantly different between both groups (P < 0.05 all), which was comparable to previous studies[13-15] (Table 2). Therefore, this data supported our hypothesis that ES with shorter drug withdrawal was sufficient for hip replacement surgery. Our results also supported the benefits of ES protocol in geriatric patients undertaking antiplatelet agents in terms of significantly lower overall postoperative complications (P = 0.02) and length of hospital stay (P < 0.001), and higher one-year ambulatory status (P = 0.02) without any significant difference in postoperative ICU requirement or readmission rate (P > 0.05 both) (Table 3). This could be explained because early surgical intervention resulted in early rehabilitation in order to prevent postoperative complications such as venous thromboembolism, or infection. Moreover, this study could detect higher postoperative complication trend due to the rebound phenomenon, although not statistically significant, in cardiac complications in the DS group (3 patients) compared with the ES group (none). This confirmed that cessation of antiplatelet therapy perioperatively increased the risk of thrombotic events[40-42].

Based on our study, we found that there were positive effects in early hip replacement surgery in the geriatric hip fracture patient with ongoing antiplatelet treatment. Unfortunately, our study population was mainly on aspirin, for more than 80% of our study population. However the previous studies on clopidogrel effects on the hip fracture surgery revealed a similar trend that ES should be more beneficial than delayed hip surgery[13-17]. Therefore we have concluded that early hip surgery in geriatric hip fracture patients with ongoing antiplatelet treatment was not associated with a significant increase of perioperative blood loss and postoperative mortality. Moreover, ES resulted in better postoperative surgical outcomes. Early hip surgery protocol and discontinuation of antiplatelet agents and operation within 72 h after admission, is safe and effective for the medically fit patients.

The standard hip fracture protocol should include the geriatric hip fracture patients taking antiplatelet medications and having stable medical conditions to receive early surgical intervention within 72 h after admission.

This study is a good comparative clinical study which showed the benefits of early surgery in the hip fracture patients who receive antiplatelet medication.