Vanishing bone disease (Gorham-Stout syndrome) is a rare entity of unknown etiology, characterized by destruction of osseous matrix and proliferation of vascular structures, resulting in destruction and absorption of bone. Despite the extensive investigation of the pathogenetic mechanisms of the disease, its etiology hasn’t been clarified and several theories exist. The syndrome can affect one or multiple bones of the patient, including the skull, the upper and lower extremities, the spine and pelvis. The clinical presentation of a patient suffering from vanishing bone disease includes, pain, functional impairment and swelling of the affected region, although asymptomatic cases have been reported, as well as cases in which the diagnosis was made after a pathologic fracture. In this short review we summarize the theories regarding the etiology as well as the clinical presentation, the diagnostic approach and treatment options of this rare disease.

Core tip: Vanishing bone disease (Gorham-Stout syndrome) is a rare entity of unknown etiology, characterized by destruction of osseous matrix and proliferation of vascular structures, resulting in destruction and absorption of bone. The syndrome can affect one or multiple bones of the patient, including the skull, the upper and lower extremities, the spine and pelvis. Physicians should be aware of the existence of this rare entity and reliably direct affected patients to right diagnosis and therapeutic approach.

Vanishing bone disease is a rare entity characterized by destruction of osseous matrix and proliferation of vascular structures with benign origin[1]. Despite the extensive investigation of the pathogenetic mechanisms of the disease, its etiology hasn’t been clarified. The first that described this entity was Jackson in 1838, who reported the case of a young man with a gradually vanishing humerus[2]. Moreover, in 1955, Gorham and Stout published a paper, which correlated the massive osteolysis noted in the disease with hemangiomatosis[3], that seems to have played an important role in the fact that vanishing bone disease is also called “Gorham-Stout syndrome”.

Despite its previously mentioned benign character, its prognosis is unpredictable[5] and the presence of several serious complications in some cases cannot be ignored. Therefore, meticulous research has been done concerning the molecular mechanisms of the disease and possible pharmacological targets are systematically investigated.

Principally, a reference to the molecular basis of the disease has to be done. Dickson et al[6] in 1987 were the first that approached Gorham-Stout syndrome from a cytochemical point of view. Investigating the cytochemistry of alkaline and acid phosphatase, they suggested that mononuclear phagocytes, multinuclear osteoclasts and the vascular endothelium participate in bone resorption in this disease[6]. Furthermore, in 1996, Devlin et al[7] attributed this massive osteolysis to the enhanced activity of the osteoclasts, in which Interleukin-6 seems to play a critical role, since its levels in the serum of patients suffering from Gorham-Stout syndrome in early stages, were elevated. Moreover, an interesting observation of Korsić et al[8], in 1998, was that the disease appeared in a person with agenesis of C-cells of the thyroid gland and subsequent lack of calcitonin, an hormone with antiosteoclastic activity. On the other hand, Möller et al[9] in 1999 referred to the increased number of stimulated osteoclasts as a factor that is involved in the pathogenesis of vanishing bone disease, while, in 2001, Hirayama et al[10] concluded that the increased number of the circulating osteoclasts is the consequence of the increased sensitivity of their precursors to humoral factors that lead to osteoclast formation. Another important point about the histopathology of Gorham-Stout syndrome was noted by Colucci et al[11] (in 2006), who found that the cells they isolated from a patient’s lesion belonged to a monocyte-macrophage lineage and could release high amounts of osteoclastogenic and angiogenic molecules. Additionally, Hagendoorn et al[12] (in 2006) underlined the critical role that could play the signaling pathway of the PDGFR-b (receptor of the lymphangiogenic growth factor Platelet Derived Growth Factor BB) in the pathogenetic mechanism of the disease. Besides, in 2007, Bruch-Gerharz et al[5] tried to shed more light onto the pathogenesis of the syndrome, writing about lymphatic vascular malformations involving the skin and the soft tissues adjacent to the diseased bone. The character of Gorham-Stout syndrome as a disease of disordered lymphangiogenesis is also highlighted by Radhakrishnan et al[13] (in 2008), who supported that research should focus on the investigation of lymphangiogenic pathways.

The syndrome can affect one or multiple bones of the patient, whose age has been reported to be from 1 mo[14] to 75 years old[15]. As a general rule, the persons that suffer from the disease are younger than 40-year-old[16], while an epidemiologic correlation with race, gender and geography does not seem to exist[9,17-19]. However, some authors noticed a clear “predilection” of the disease in males[20].

Gorham-Stout syndrome is met in a large spectrum of bones, but the majority of case reports refer to the maxillofacial region and the upper extremity[16]. Nevertheless, Hu et al[20] recently reported a case series, in which the femur was the predominant affected bone.

Radiologicaly, initial X-rays reveal changes resembling patchy osteoporosis. At a later stage bone deformity occurs with bone mass loss and concentric shrinkage in the long bones of upper and lower extremities. Eventually, near complete resorption of the bone occurs, resulting in the appearance of the so-called “vanishing bone” disease[9,21].

The clinical presentation of a patient suffering from vanishing bone disease includes, most frequently, pain, functional impairment and swelling of the affected region, although asymptomatic cases have been reported, as well as cases in which the diagnosis was made after a pathologic fracture[20]. Furthermore, the complications of the syndrome can be potentially fatal. For example, pleural effusion and chylothorax (which has been reported to be a complication of Gorham-Stout syndrome in a percentage up to 17% )[22] can dramatically influence the respiratory function. Chylothorax may occur due to the affected thoracic skeleton by the extension of lymphangiectasia into the pleural cavity or by the invasion of the thoracic duct[23]. Also, hemangiomatosous cutaneous lesions[5,24], bone infection and subsequent septic shock[24], spinal cord involvement and paraplegia due to vertebral lesion[25] and cerebrospinal fluid leakage and meningitis due to diseased bones of the skull[26] have been rarely reported.

The differential diagnosis of the disease includes hereditary multicentric osteolysis, osteolysis with nephropathy, osteomyelitis, rheumatoid arthritis[27], osteolysis due to intraosseous malignacies, hyperparathyroidism, eosinophilic granuloma and osteolysis due to diseases of central nervous system, like syringomyelia and tabes dorsalis[28].

Figures 1 and 2 shows a case example of a massive Gorham-Stout syndrome of the Pelvis in a young female, treated in our institution. Only few similar cases of pelvic appearance of the disease have been described in the literature[17,29-31].

Figure 1 Case example: X-ray (A) and computed tomography scan (B), of a 26 years old female, with vanishing bone disease of the pelvis. She presented with mild groin pain without any further symptoms. 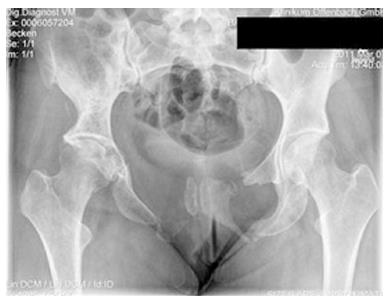 Figure 2 X-ray of the pelvis of the previous patient. Three years later she remained asymptomatic with only mild discomfort to the groin and no further symptoms.
DIAGNOSIS

The diagnosis of the syndrome is challenging, demands a high grade of clinical suspicion and is assisted by several diagnostic examinations. Initially, blood tests are not indicative of the diagnosis, as they are usually normal, with the possible exception of alkaline phosphatase, which may be slightly elevated[23]. Additionally, a diagnostic role could be played by plain radiographs[32,33], bone scan[34], Computed tomography[35] and magnetic resonance imaging (MRI)[36]. Plain X-rays, initially, show radiolucent foci in the intramedullary or subcortical regions and, later, slowly progressive atrophy, dissolution, fracture, fragmentation and disappearance of a part of a bone, with tapering or “pointing” of the remaining osseous tissue and atrophy of soft tissues[37]. On the other hand, the results from bone scan and MRI are variable[16,38].

Despite the usefulness of the previously reported diagnostic means, the disease is confirmed by the histopathological analysis of the lesions[39]; the biopsy shows nonmalignant hyperproliferation of small vessels[4,5,17]. So, Heffez et al[40] suggested the following 8 diagnostic criteria of Gorham-Stout syndrome: (1) positive biopsy findings in terms of angiomatous tissue presence; (2) absence of cellular atypia; (3) minimal or no osteoclastic response and absence of dystrophic calcifications; (4) evidence of local bone progressive resorption; (5) non-expansive, non-ulcerative lesion; (6) absence of visceral involvement; (7) osteolytic radiographic pattern; and (8) negative hereditary, metabolic, neoplastic, immunologic and infectious etiology[40]. Indeed, the diagnosis of vanishing bone disease should be suspected only after other causes of osteolysis, like infection, cancer, inflammatory and endocrine disorders are excluded[41].

Vanishing bone disease, despite the fact that is considered as benign[42] and its natural progression is characterized by spontaneous resolution[4], has an unpredictable prognosis[5] and possible serious complications. Since its etiology remains unclear, its treatment is still an object of research, although several therapeutic options have been proposed with various results. The treatment of syndrome includes three major categories: medicine therapy, radiation and surgery[20]. In the first field, biphoshonates have been successfully used for the treatment of the syndrome, showing an antiosteolytic activity[43]. Besides, other pharmacologic agents, like vitamin D, a-2b interferon, calcium, adrenal extracts and androgens have been suggested[5,13,39,44]. However, current research about the molecular mechanisms of the disease promises encouraging results, focusing on pathways of receptors of lymphangiogenic growth factors, which may be proved useful therapeutic targets[4].

In patients with large symptomatic lesions with long-standing disabling functional instability, radiation and surgical treatment are preferred[23]. The therapeutic results from the use of radiation in moderate doses seem to be satisfactory, with few long-term complications[42]. However, radiation could provoke some serious side effects, like secondary malignancy and growth restriction in children and adolescents who receive a high-dose therapy[23]. Finally, the surgical management is performed by resection of the lesion and reconstruction by use of bone grafts and/or prostheses[16].

In conclusion, provided that the etiopathology of vanishing bone disease has not been fully clarified, further research is needed for more effective therapeutic interventions. Physicians should be aware of the existence of this rare entity and reliably direct affected patients to correct diagnosis and therapeutic approach.