The Ponseti method has become the gold standard for the treatment of idiopathic clubfoot. Its safety and efficacy has been demonstrated extensively in the literature, leading to increased use around the world over the last two decades. This has been demonstrated by the increase in Ponseti related PubMed publications from many countries. We found evidence of Ponseti activity in 113 of 193 United Nations members. The contribution of many organizations which provide resources to healthcare practitioners in low and middle income countries, as well as Ponseti champions and modern communication technology, have helped to spread the Ponseti method around the world. Despite this, there are many countries where the Ponseti method is not being used, as well as many large countries in which the extent of activity is unknown. With its low rate of complication, low cost, and high effectiveness, this method has unlimited potential to treat clubfoot in both developed and undeveloped countries. Our listing of countries who have not yet shown presence of Ponseti activity will help non-governmental organizations to target those countries which still need the most help.

Core tip: The Ponseti method has become the gold standard for the treatment of idiopathic clubfoot. With its low rate of complication, low cost, and high effectiveness, this method has unlimited potential to treat clubfoot in both developed and undeveloped countries. Our listing of countries who have not yet shown presence of Ponseti activity will help organizations to target those countries which still need the most help.

Ponseti developed his method for the conservative treatment of clubfoot at the University of Iowa in the 1950’s, but it remained largely confined to Iowa until around 1997. It has since spread widely around the world.

Clubfoot (CF) is a common congenital deformity affecting approximately 1-2 per 1000 live births. The traditional treatment of congenital clubfoot has been mainly performed through complex surgical release procedures[1,2]. Common complications related to this extensive surgery included recurrence of the deformity, overcorrection, long-term joint stiffness, and pain[3,4]. The disappointing long term results inspired some to seek out less invasive, more conservative treatments typified by the Ponseti method, which involves serial casting and percutaneous Achilles tenotomy of the affected feet followed by bracing to maintain the correction.

Today, this method has become the de facto gold standard for the initial treatment of clubfoot. Its safety and efficacy has been demonstrated extensively in the literature[5-14].

We performed a systematic review to determine the exact penetration of the Ponseti method worldwide, and to examine the factors that lead to this spread. The additional goal of this study is to determine which countries are currently not using the Ponseti method, in order to help agencies such as Ponseti International and Miracle Feet to target new countries for expansion.

The following databases were used for this search through October 31, 2013: The United States National Library of Medicine National Institutes of Health (PubMed), the Cochrane Library and the Excerpts Medical Database (EMBASE). We used “Ponseti” and “Ponseti method clubfoot” as key words in our search. We included publications in all languages where an English abstract was available. We used Google scholar to search for abstracts presented at various conferences such as the “5th and 6th International clubfoot congress”. Additionally, we searched in the web sites of “Ponseti International”, “Global Clubfoot Initiative”, “Miraclefeet” and “Cure Clubfoot” to determine which countries are using the method, though have not yet published their results[15-18] (Table 1). Additionally, “Ponseti method” and each of the 193 United Nations (UN) acknowledged countries were used as search words in Google to ensure that our information was as complete as possible.

Published articles were then categorized by number, year, and region.

Although the 193 members of the UN represent the vast majority of countries in the world, independent countries such as Vatican City and Kosovo are not included. For the purpose of this review, we included only those 193 countries recognized by the UN.

We found more than 265 published papers discussing the Ponseti method for the treatment of clubfoot from 1950 until October 31, 2013. These papers originated from only 34 of the 193 UN countries using PubMed, the Cochrane Library and EMBASE. There were an additional 7 countries with abstracts from the 5th and 6th International Clubfoot congress (Table 1), and another 72 countries, so called, “low and middle income countries in which there was evidence of activity according to the “Ponseti International”, “Global Clubfoot Initiative”, “Miraclefeet” and “Cure Clubfoot” association websites. In these cases, we relied on confirmation from colleagues who are leaders in the dissemination of the Ponseti method globally.

With this evidence, we conclude that a total of 113 countries are currently using the Ponseti Method clinically. We further categorized those countries with published papers according to when the treatment occurred. These four epochs include; up to 2000, from 2001 to 2005, from 2006 to 2010 and after 2011 (Figure 1). 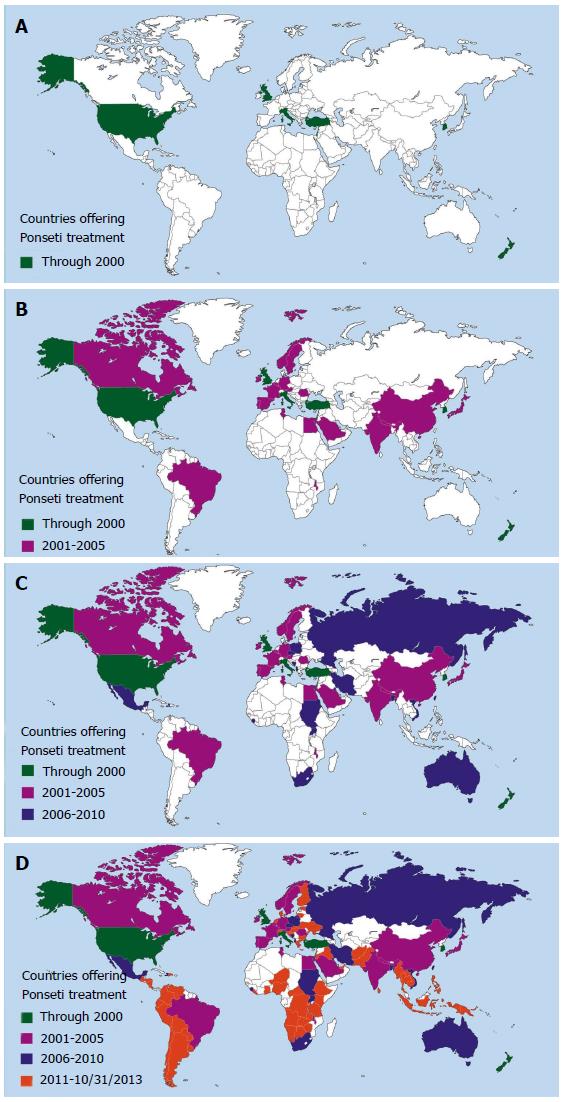 The number of publications across a wide variety of countries in PubMed has increased significantly over the past two decades suggesting an increase in those who are trained and using the method (Figure 2). 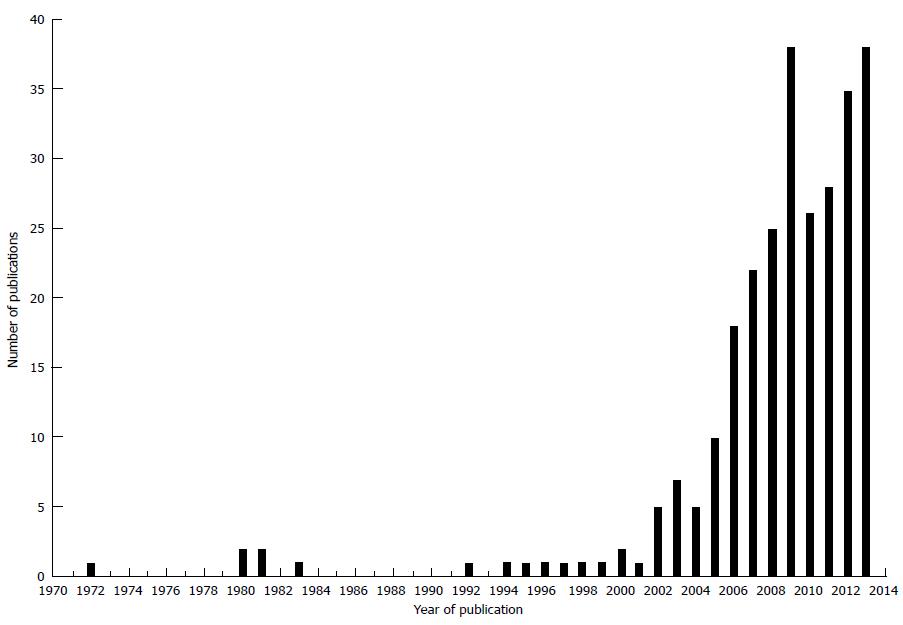 Figure 2 Demonstrates the increase in the number of Ponseti related articles in PubMed during the last two decades.

There are some countries where we know for certain the Ponseti method is being used, but could not find publications or Internet evidence (Table 2).

Since Ponseti first introduced his method for the treatment of clubfoot in the 1950’s, the method was relatively isolated and confined to Iowa until 1996 when Ponseti published his textbook. Since 1997, the efforts of Ponseti champions have led to a steady increase in clinical use and publication worldwide, especially over the last decade. This conservative method has been shown to be effective, safe, and cost-effective[5-14]. As this method is largely non-surgical, and requires only basic medical supplies, its potential to spread to both developed and undeveloped countries is unlimited. With proper training, this method can effectively be performed by a wide variety of medical personnel, including physiotherapists and orthopedic officers.

Despite the benefits of this technique, we found that only 34 of 193 (18%) UN countries have published their experience using the Ponseti method. In another 7 countries we found abstract submissions related to this topic and another 72 countries where the Ponseti method is apparently performed on a clinical basis. This total of 113 countries represents only 59% of the countries in the world.

One of the weaknesses of this study is that large countries such as China and Russia have shown evidence of activity but the actual extent or penetrance of activity is unknown. Also, although various information gathering methods were used, it’s possible that we omitted countries that may be already practicing the Ponseti method. For this we apologize and await remonstrative letters to the editor correcting our inaccuracies. Further studies need to be done to provide further information about the extent within these countries that the Ponseti method is being used.

More than 220000 children in developing countries are born with clubfoot every year[15-18]. Despite the efforts of some non-profit organizations, there are still many children with neglected clubfoot and disability caused by untreated or wrongly treated clubfoot. With proper training and education, we feel this method could be further spread, successfully treating patients in both developed and developing countries around the world. This review gives us some idea where this future training and education could be best targeted.

According to the Ponseti clubfoot management book[19]: more than 100000 downloads of the PDF edition in more than 30 languages have been performed in more than 150 countries.

What has helped this method to spread? (1) Evidence based results (publications) which detail the success of this method, in a wide variety of clinical practices. The Ponseti method was proven to be the gold standard treatment for CF patients; therefore many countries adopted this method as the initial treatment for newborn patients (Figure 2); (2) Recent studies have shown good results when the Ponseti method was performed by trained clinical specialists in either a teaching hospital setting or in the developing world. In countries in which there are fewer orthopedic surgeons, especially in low income countries, specially trained non-physician staff can successfully perform this method in a non-surgical environment[20-22]; (3) Non-governmental organizations such as the Global Clubfoot Initiative and the Ponseti International Association provide resources to health care practitioners in low and middle income countries[15-18]; (4) Ponseti champions, such as Jose Morcuende, Shafiq Pirani, Norgrove Penny, Fred Dietz, John Herzenberg and many others have made contributions by traveling to, and training staff in developing countries; (5) Technological advances such as the Internet helped to spread this method in two ways. First, parents today frequently searched the Internet for new, effective, minimally invasive techniques[23]. Second, physicians now can read free articles and learn the method by watching demonstration videos. The internet is also a tool for transmission of the Ponseti method by the “Ponseti Virtual Forum” (PVF), which demonstrated its effectiveness in low income countries[24]; (6) The treatment is affordable as it uses inexpensive casting materials as its primary treatment. The Achilles tenotomy is typically done as an office procedure, thereby avoiding expensive surgical costs[25]; (7) Clubfoot: Ponseti Management book. This book provides information on all aspects of Ponseti management of Clubfoot, and is available as a free download in more than 30 different languages. More than 100000 downloads of the PDF have been performed in more than 150 countries; and (8) Meetings and training courses are available to practitioners in the United States and around the world. Jayawardena et al[26] demonstrate the effectiveness of these courses in a study in which an online survey was sent to the participants in these training courses from 2001 to 2011. They found that prior to the course, surgical release was the primary method of treatment. Ninety-seven percent of respondents changed their practice as a result of attending the course.

Since approximately 2000, there has been a spectacular increase in number of countries using the Ponseti method. The Internet, training courses, individuals and organizations have all helped to educate health care professionals as well as patients, increasing its impact worldwide. This review identifies where this method is currently being used, as well as those areas (Table 2) that could benefit from targeted education and training. With its low rate of complication, low cost and high effectiveness, this method has unlimited potential for the treatment of clubfoot in both developed and undeveloped countries.