In rheumatoid arthritis the small joints of the feet and hands are the first targets of the autoimmune process. In about one half of the patient the wrist is involved in the first stages of the disease (two years) increasing up to nearly 90 percent after a decade often including both sides. Osteoarthritis of the wrist is one of the most common conditions encountered by hand surgeons. One aim of all treatment options is to achieve the best possible hand function without pain. If conservative treatment fails, operative treatment is necessary. Choice of surgical treatment depends on the soft tissue and bone situation. Techniques can be differentiated by joint preservation or joint replacement. The first include radio-synoviorthesis, synovectomy and tendon repair, the latter resection-arthroplasty, total joint arthroplasty and arthrodesis. In this paper arthrodesis of the wrist as one treatment option is reviewed.

Core tip: This paper discusses the pathophysiology of wrist destruction due to rheumatoid arthritis. A short overview of different treatment options is given with a special reflect on wrist arthrodesis, surgical techniques and outcomes are presented.

If once the inflammatory cascade is activated progressive autoimmune mediated joint destruction is the result. Joints are affected by immune cell mediated inflammation of the soft tissue which is progressive and with the time affects the bone, too. It starts with swelling and stiffness of small joints in the morning, postive blood tests and pain. The disease can be associated with rheumatic nodules in one fifth oft he patients in combination with postive rheuma factors. The disease is classified by American Rheumatoid Association, which enables dignostis and therapy and is based on a disease period of more than six weeks[1]. The course oft he disease can vary from patient to patient. Self limiting forms are possible, but if not joint destruction is the result. First targets oft he autoimmune system are the small joints of the feet and hands (Figure 1). In about one half of the patient the wrist is involved in the first stages oft he disease (two years) increasing up to nearly 90 percent after a decade often including both sides. Many social impairments such as long illness periods and loss of employment are the result in many cases[2-6]. 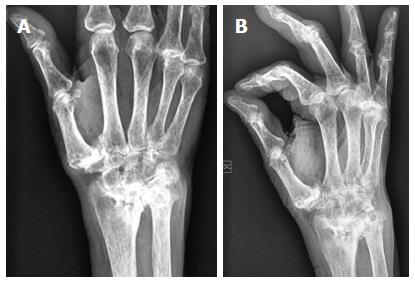 Due to arthritis and soft tissue inflammation pathological changes can be diagnosed and classified radiologically. The pathologies include bone and cartilage and result in periarticular sclerosis, metaphyseal osteoporosis and bone cystes, cartilage loss and consecutive joint space loss and instability. Different classifications are available, three of them are presented here. The Larsen classification describes five different stages of bone and cartilage changes (Table 1)[7]. The Wrightington classification is a combination radiological classification with regard to therapy describing four different groups (Table 2)[8]. Simmen et al[9] classified arthritic changes with respect to progression and is based on stability of bone and soft tissue.

The first type is the ankylosing, the second describes changes due to arthritic and arthritic destruction and the third type describes instability and disintegration, which needs bony stabilisation in the case of progression.

The autoimmune disease can affect all tissues, therefore a careful examination of the patient including all regions should be the first step of the orthopaedic evaluation. The patients history including the onset and expression of different typical symptoms such as swollen, painful, overwarmed, stiff, weak, red or numb changes are evaluated. The nature and character and location of the findings should be noted. The first examination should include the activity level of the patient, the social sourrounding and employment using one of the generally accepted scores for objective documentation of disease stage[10-12]. All medication, including corticosteroid application, immunosuppressive therapy and non-steroidal anti-inflammatory drugs and therapy history are documented. All other diseases should be kept in mind, this can be vascular impairment, diabetes mellitus and all inner organs. The so called “fifth extremity” of the patients, the cervical spine can be affected as often as other joints and can present instability, myelopathy due to compression can result in extremity pathology. In this is the case examination of nerve conduction velocity and electromyography are recommended before joint surgery. Clinical evaluation of the status of the upper and lower extremity include gait analysis, range of motion, test of grip strength. Vascular status or signs of vasculitis should be addressed before surgery to avoid wound complications.

All different options for surgical treatment base on the situation of bone and soft tissue destruction. Basicly two approaches can be differentiated: joint preservation and joint replacement. If cartilage and ligaments are functional present a joint preserving technique should always be used. As a first approach synovectomy of the wrist is recommended and may be combined with soft tissue procedures. When the synovia is removed the target of the autoimmune reaction is removed and in the best case pain and swelling diminish and further joint destruction is prevented. If tendon rupture is associated with arthritis repair must be done in all cases. For extensor tendons different replacing methods exist: they include different transfers from one extensor tendon to another or free grafts. In the case of flexor tendon rupture of the thumb arthrodesis of the distal joint is recommended. Transfer or relocation of tendons are necessary to restore hand function and stability and therefore preventing further progression[3,13,14].

Due to hygienic reasons simultaneous surgery of both hands should be avoided. Surgery of the wrist and proximal or distal joints (for instance the elbow or finger joints) should be avoided because of the risk of extensive swelling and wound healing problems. The same is true for the lower extremity because of limited mobilisation postoperatively. For this reason surgery of the lower extremity first is recommended[12].

For patients with advanced arthritic changes, wrist fusion is a well-established, safe and reliable method. Several different operative techniques including intramedullary rods or plates for wrist fusion have been retrospectively analysed in long-term studies[15,16]. Osteosynthesis utilising a Rush pin was first described in 1965 by Clayton and was modified in 1971 by Mannerfelt[17,18]. Plate osteosynthesis was introduced by Mueller in 1961 and the original concept was modified in the 1980s with the development of dynamic compression plates which became widely used and have been shown to achieve good primary stability (Figure 2)[19,20]. 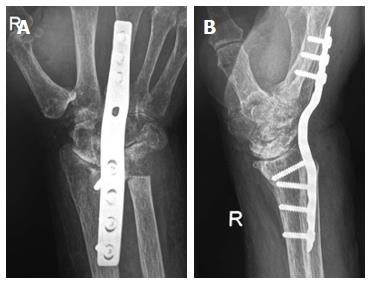 Figure 2 Postoperative X-ray after wrist arthrodesis of the hand seen in Figure 1. A: a.p.; B: Lateral view.

The position of the fusion remains a matter of debate. In literature, there is a trend towards moderate extension and ulnar abduction. Nevertheless, some surgeons prefer the neutral position which maintains finger balance and allows for better pronation and supination, thus preserving sufficient muscular strength[15,17]. A recent study suggests no statistical difference for position of Mannerfelt arthrodesis in 34 wrists[21]. Another new study on follow up of 93 wrists with Mannerfelt arthrodesis describes this method as an alternative to plate arthrodesis with regard to its good results[22]. For bilateral fusions, it has been recommended to stabilise one side in some flexion and the other in some extension[23]. We compared two methods for arthrodesis, plate and pin fixation, and found comparable clinical outcome with regard to pain and fuction. Subjective satisfaction and strength of grip were higher in the plate group[24]. Despite regained strength and high patient satisfaction, some disadvantages of the fusion have to be considered and which were also observed in our study. Impaired precision mechanics, such as difficulties in performing personal hygiene functions, as well as handling coins and buttons, are the most frequently stated limitations of wrist fusion[24-26]. To overcome these limitations, alternative treatment strategies, including proximal row carpectomy and arthroplasty, have been developed. In conclusion, despite the advances in wrist arthroplasty, wrist fusion represents the method of choice in the treatment of the significant destructed wrist due to rheumatoid arthritis. One aim of this option is to re-establish wrist stability, permitting activities of daily life, to achieve painlessness, and ultimately to improve the quality of life. In selecting the fusion method, the surgeon should consider the need for possible additional surgeries, the quality of the local bone stock, as well as the grade of luxation of the wrist. A comparison of different fixation methods in four studies did not show any differences with regard to surgical technique. Prior to performing the procedure, the planned position of the fusion should be discussed with the patient to address the individual needs[23-30]. Reflecting the long experience and published results, arthrodesis of the wrist is still one of the golden treating standards.