The limited intrinsic healing potential of human articular cartilage is a well-known problem in orthopedic surgery. Thus a variety of surgical techniques have been developed to reduce joint pain, improve joint function and delay the onset of osteoarthritis. Microfractures as a bone marrow stimulation technique present the most common applied articular cartilage repair procedure today. Unfortunately the deficiencies of fibrocartilaginous repair tissue inevitably lead to breakdown under normal joint loading and clinical results deteriorate with time. To overcome the shortcomings of microfracture, an enhanced microfracture technique was developed with an additional collagen I/III membrane (Autologous, Matrix-Induced Chondrogenesis, AMIC®). This article reviews the pre-clinical rationale of microfractures and AMIC®, presents clinical studies and shows the advantages and disadvantages of these widely used techniques. PubMed and the Cochrane database were searched to identify relevant studies. We used a comprehensive search strategy with no date or language restrictions to locate studies that examined the AMIC® technique and microfracture. Search keywords included cartilage, microfracture, AMIC®, knee, Chondro-Gide®. Besides this, we included our own experiences and study authors were contacted if more and non published data were needed. Both cartilage repair techniques represent an effective and safe method of treating full-thickness chondral defects of the knee in selected cases. While results after microfracture deteriorate with time, mid-term results after AMIC® seem to be enduring. Randomized studies with long-term follow-up are needed whether the grafted area will maintain functional improvement and structural integrity over time.

Core tip: Articular cartilage has a limited healing potential which presents a well-known circumstance in orthopedic surgery. This fact has led to a variety of surgical techniques for treating articular defects and currently the microfracturing presents the most commonly used procedure. The aim of this article is to give an overview about actual studies regarding microfracture and the AMIC® technique in cartilage knee surgery and to show recent developments.

Articular cartilage has a limited healing potential which presents a well-known circumstance in orthopedic surgery[1]. The affected patients suffer from pain, stiffness and loss of quality of life. This fact has led to a variety of surgical techniques for treating articular defects and currently the microfracturing presents the most commonly used procedure[2]. Pridie recognized the potential of mesenchymal stem cell (MSCs) stimulation for the aim of cartilage repair in the 1950s while Steadman et al[3] described further developments of penetrating the subchondral bone for the recruitment of MSCs in the 1990s. In microfracture (MFx) the MSCs migrate in the fibrin network of the blood clot and this clot is transformed into repair tissue by the contained bone marrow components. In this context the blood clot is not mechanically stable to withstand tangential forces[4,5]. Therefore Benthien et al[6] developed the Autologous, Matrix-Induced Chondrogenesis (AMIC®) technique. This procedure uses a natural collagen I/III scaffold (Chondro-Gide®, Geistlich Pharma AG, Switzerland) which covers the microfractured area and stabilizes the formed blood clot. Several clinical results of AMIC® have already been published[6-9].

The aim of this article is to give an overview about actual studies regarding microfracture and the AMIC® technique in cartilage knee surgery and to show recent developments.

The potential of mesenchymal stem cell (MSCs) stimulation for the aim of cartilage repair was first described by Pridie[10]. Steadman developed out of this the microfracture technique[3]. Both techniques have similarities including focal penetration of the subchondral plate to expose cartilage defects to the benefits of cellular and growth factors influx, as well as improving anchorange of the new tissue to the underlying subchondral bone and to some extent surrounding cartilage. However, while functional outcomes have been reported, there is a paucity of data on the histological, biochemical and molecular changes in human patients[3,11].

Regarding the application of a collagen membrane in cartilage defects like used in AMIC®, Kramer et al[12] showed in an in-vitro work that a membrane consisting of collagen can retain cartilage building cells, like, e.g., mesenchymal stem cells from bone marrow after microfracturing. In conclusion MSCs, found in the membrane, were successfully differentiated into adipogenetic, osteogenetic and chondrogenetic lineage. Dickhut et al[13,14] demonstrated in another in-vitro study that a biphasic carrier made of collagen type I/III, like for, e.g., Chondro-Gide® (Geistlich Pharma AG, Switzerland) used for AMIC®, supports chondrogenesis of MSCs and further that in comparison to collagen-free-membrane the form stability of the repair tissue was enhanced.

Gille et al[15] tested in a sheep study with a follow-up period of 12 mo the addition of a collagen membrane to microfractured areas. The authors confirmed that the average thickness of the repair tissue was greater when a collagen I/III scaffold was used compared to microfracture alone.

While clinical efficacy of the MFx technique for articular cartilage repair in the knee has recently been subjected to an evidence-based systematic analysis (28 studies describe 3122 patients), the published data about AMIC is in comparison still limited[16].

In general diverse factors are known to influence the clinical outcome after microfractures: size and location of the defect, sex and age of the patient, surgical technique and postoperative rehabilitation program[17,18].

Regarding the size of the defect Gudas et al[19] showed in a prospective randomized clinical study that the International Knee Documentation Committee (IKDC) score in young athletes showed significant worse outcome in the microfractured group if the lesion was greater as 2 cm2 and concluded that the lesion size affects the outcome of microfracture.

According to this, Knutsen et al[20] presented in another prospective randomized clinical study comparing autologous chondrocyte implantation with microfracture significant higher short form 36 (SF-36) scores in MFx group associated with lesions under 4 cm2 and also concluded that the lesion size is associated with MFx outcome.

De Windt et al[21] analyzed in a prospective cohort study the prognostic value of the defect location (medial vs lateral) on clinical outcome 3 years after cartilage therapy for a focal cartilage lesion in autologous chondrocyte implantation (ACI) and MFx. The authors found a significant better Knee and Osteoarthritis Outcome Score (KOOS) for medial than for lateral lesions and therefore concluded that the defect location is related to clinical outcome of ACI and MFx. Another prospective cohort study by Kreuz et al[22] confirmed the effect of defect location for clinical outcome after microfracture procedure. IKDC and Cincinnati score as well as MRI findings showed significant better outcome when MFx was performed in femorale condyle versus tibia, trochlea and retropatellar regions.

In a prospective study by Mithoefer et al[23] a lower body mass index (BMI) correlated with higher scores for the activities of daily living and SF-36 after microfracture in 48 symptomatic patients with isolated full-thickness articular defects in the knee joint. Worst results were seen in patients with a BMI > 30 kg/m2.

Highlighting the patients age, de Windt et al[21] showed in a prospective study treating 55 patients with MFx and ACI that the KOOS improvement was significantly better for patients under 30 years compared with older patients[21]. Data of a randomized controlled trial with 80 human subjects treated with ACI or MFx by Knutsen, are in accordance with findings from de Windt et al[21]. Both authors concluded that the patient age influences the clinical outcome of ACI as of MFx. In contrast we could not show a significant impact of age on the results after AMIC®[24].

To overcome the shortcomings of the microfracture technique, an enhanced procedure was first described in 2005 by Behrens et al[25] and first initial results were presented by our study group. Figure 1 shows step-by-step an arthroscopically AMIC® procedure. In a prospective series, we investigated 27 patients with a follow-up-period up to 62 mo and a mean of 37 mo. The mean age of the patients was 39 years (range 16-50 years) and the mean defect size was 4.2 cm2 (range 1.3-8.8 cm2). 87% of the patients were subjectively highly satisfied and the outcome scores applied [Lysholm, International Cartilage Repair Society (ICRS), Meyer, Tegner, Cincinnati] showed significant increase up to 24 mo. Patients with lesions larger 8 cm2 had greatly reduced scores. In this series, a potential gender-specific dimorphism was obvious; males had significantly higher values in the ICRS score compared with their female counterparts[24]. We couldn’t approve these findings in a recent study evaluating 57 patients treated with AMIC[8]. In this study a significant decrease of pain in the visual analogue scale (VAS) from a mean of 7.0 preoperatively to 2.7 at 1 year and 2.0 at 2 years postoperatively was found (Figure 2). Improvement of the Lysholm score also showed significant results with a mean score of 50.1 preoperatively, 79.9 at 1 year and 85.2 at 2 years postoperatively (Figure 2). Younger patients with no ligamentous instability, meniscal deficiency or patellofemoral malalignement had the best outcome[8]. 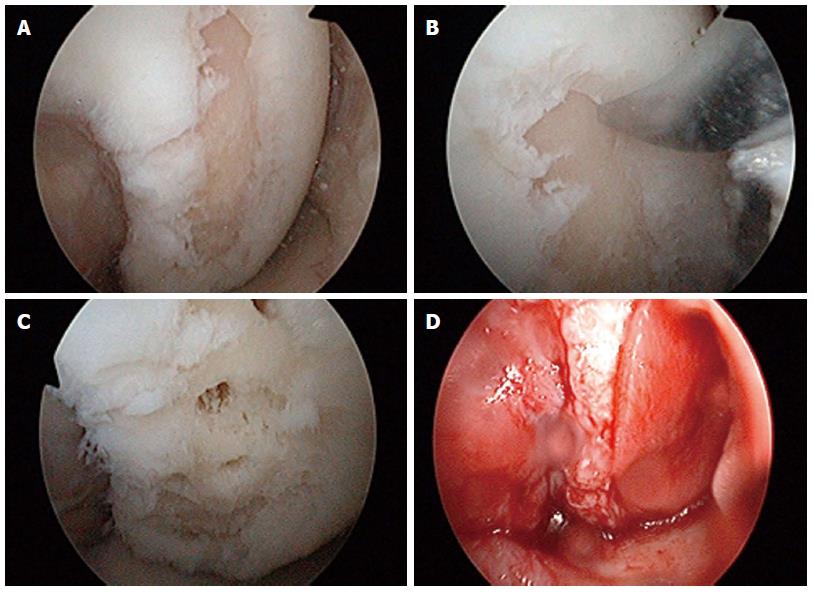 Figure 1 Twenty years old female with a chondral defect on the lateral condyl after trauma. The AMIC® technique was done arthroscopic assisted: after debridement of the chondral defect (A), numerous perforations of the subchondral lamina were performed (B, C). The implantation of the matrix was performed under dry, arthroscopic conditions, as published before (D)[27]. 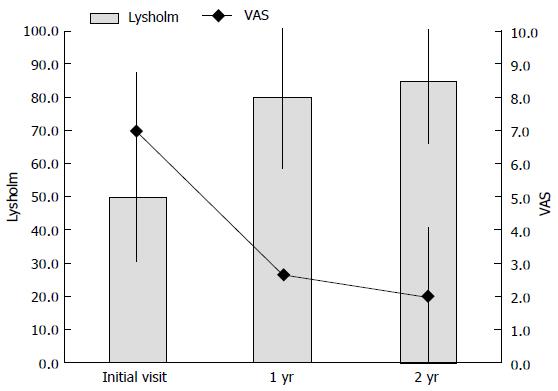 Kusano et al[26] presented clinical and radiographic results in a retrospective study with a mean follow-up of 29 mo of patients treated with AMIC for full-thickness cartilage defects of the knee. They found significant improvements in the IKDC, Lysholm, Tegner and VAS pain score. Moreover, the patients were satisfied while the MRI findings showed generally incomplete or inhomogeneous tissue filling.

A current randomized, controlled trial by Anders et al[7] compared the AMIC technique with microfracture during 1- and 2-year follow-up. The authors included 38 patients with a mean defect size of 3.4 cm2 and mean age of 37 years. The clinical follow-up was performed with the modified Cincinnati and the IKDC score. MRI findings revealed a homogenous defect filling in the majority of patients (Figure 3). No significant statistical differences could be found between the groups but improvements in both scores were seen at 1- and 2-years postoperatively. It is open to debate if a significant difference of both groups has to be expected within the first 2 years of follow-up. 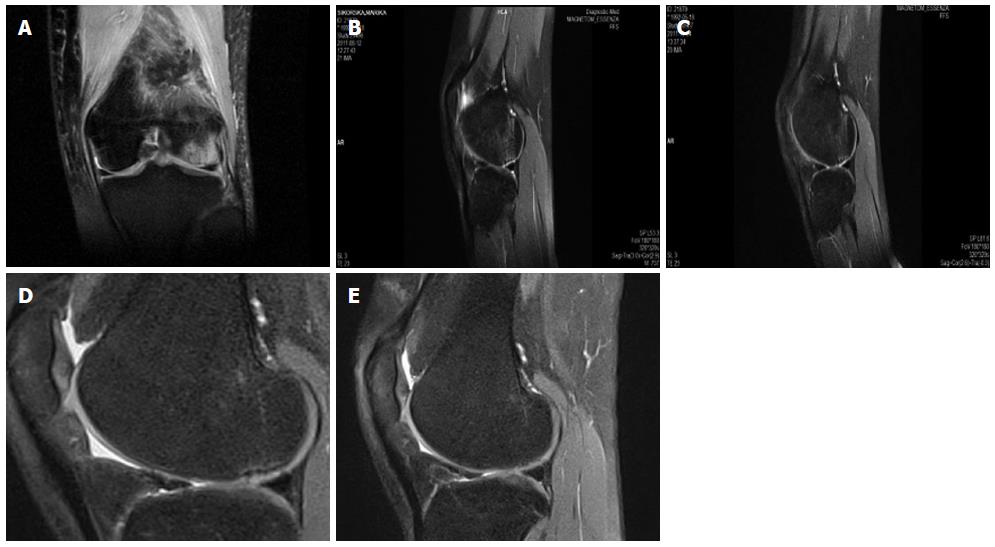 Figure 3 The same patient showing enhanced defect filling demonstrated by follow-up magnetic resonance imaging before surgery (A) and 3 (B), 6 (C), 12 (D) and 24 mo (E) after the index procedure.

Modifications to the original AMIC technique may have a promising future. An arthroscopic approach of the AMIC® technique was published by Piontek et al[27]. Compared to open surgery, the described arthroscopic technique may offer advantages including minimal soft tissue trauma and minimal blood loss. Dhollander et al[28] e.g., performed a modified so called AMIC plus technique (AMIC plus platelet-rich-plasma gel) and were able to show clinical improvements. Emerging techniques, e.g., the addition of concentrated bone marrow from the iliac crest or platelet rich plasma gel may be beneficial, but the impact needs to be proven in further studies[29]. Benthien et al[30] and Chen et al[31] presented in a recent study first results with a so called nanofracture®.

In conclusion both techniques (microfracture and AMIC®) present an effective and safe method of treating full-thickness chondral defects of the knee. While results after microfractures deteriorate with time, clinical outcome after AMIC® seems to be more enduring. By now, only one randomized trial has been published comparing microfractures and AMIC®. This limitation involves the extent to which the findings can be generalized beyond the cases studied. The number of cases is too small for broad generalizations. However, these limitations should be seen as fruitful avenues for future research along the same lines.