Core tip: Infections after total hip arthroplasty are a hazardous complication. Prosthesis retention is though to be possible in case of early infections, whereas several treatment modalities might be applied. The ideal treatment procedure is still unknown. The present work reviews the current literature about how successfully periprosthetic hip joint can be managed by debridement and prosthesis retentiond and treid to shed some light onto this difficult topic.

Despite numerous prophylactic measures infections still occur in 1%-2% after total hip arthroplasty (THA), whereas this rate may increase after revision surgery[1]. In the future, the overall infection rate is likely to increase as the life expectancy of the implants is increased and patients are followed up longer. Depending on the time of infection manifestation, duration of symptoms, virulence and antibiotic resistance profile of the pathogen organism, and the general medical condition of the patient, several treatment options are available including both one- and two-stage procedures[1].

The correct definition of the joint infection with regard to the time of infection manifestation is important for making the correct decision about the ideal treatment procedure. Generally, it is accepted that early infections are likely to be successfully managed by debridement, lavage, and prosthesis retention, whereas late infections require prosthesis removal and one- or two-stage-reimplantation in order to achieve infection eradication[5]. However, the literature data about this topic cannot be always evaluated and compared to each other to a sufficient and reliable way due to inhomogenities in the treatment procedure, patients’ collective, antibiotic therapy or length of follow-up.

Hence, the aim of the present study was to evaluate the current literature about how successfully periprosthetic hip joint infections can be managed by debridement and prosthesis retention.

A literature search was performed through PubMed from the begin of PubMed until September 2013 (Figure 1). Search terms were “DAIR (debridement, antibiotics, irrigation, and retention)” alone and in combination with “hip” as well as “hip infection + prosthesis retention”. Only English studies were included. Reviews, case reports and case series with a number of patients < 10 were excluded from the study. Studies reporting about both hip and knee cases but not allowing for differentiation between the particular outcome were also excluded. From the identified studies, a search was carried through the bibliography of each article in order to identify further studies. All studies were analysed with regard to publication date, number of patients treated, type of infection, surgical treatment modalities, surgical complications, type and length of antibiotic therapy, follow-up, and level of evidence. Studies reporting only partly on these parameters were also excluded. 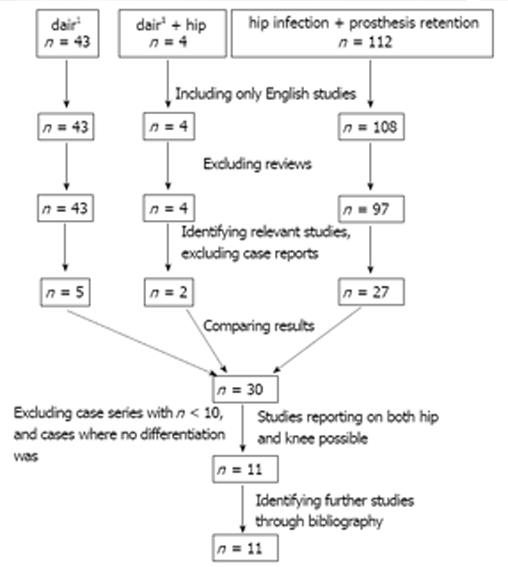 Of the 292 cases, there were 216 early and 57 late infections (with a variable definition of early vs. late infection). The remaining 19 cases were acute hematogenous according to the criteria by Tsukayama et al[2] (Table 1).

Regarding the treatment procedures, five different modalities have been described (Figure 2). One study[10] reported on debridement and another on debridement and irrigation[12]. Six studies performed debridement, lavage and change of modular prosthesis components (polyethylene (PE) liner, femoral stem head)[2,3,6,7,9,14], whereas in one of these studies the PE liner was not changed in all patients[9]. One study combined this procedure along with the use of the vacuum-assisted closure therapy[11]. Two studies reported on partial prosthesis retention[8,13]. In both studies, the infected acetabular cup was removed and an antibiotic-loaded spacer head was placed onto the retained femoral stem. Although it is difficult to evaluate the cumulative infection eradication rate for each procedure separately, literature data indicate a higher success rate for the two latter procedures (Figure 2).

All studies provided a mean follow-up of at least 24 mo (Table 2). Depending on the salvage procedure used in each study, the infection eradication rate ranged from 21% to beyond 90% (Table 2).

The aim of the present study was to evaluate the current literature about how successfully periprosthetic hip joint infections can be managed by debridement and prosthesis retention. There was a low level of evidence among the 11 identified studies. Most infections were early infections, whereas a variable definition of the type of infection was evident through the studies. Five different modalities have been described with an infection eradication rate ranging from 21% to beyond 90%. With regard to the postoperative antibiotic therapy, no general consensus could be drawn from the available data about the ideal type or length of the therapy.

To the best of our knowledge, our literature search revealed 11 relevant studies. One possible cause for that might be the literature review only through PubMed and not also through other libraries. Moreover, our strict inclusion criteria led to the exclusion of numerous studies which might have provided more information and allowed for a more reliable interpretation of the data. On the other hand, more heterogenous data may not allow for meaningful conclusions. However, the purpose of the present study was to evaluate only studies reporting on hip joint infections. Several well-designed studies with a higher level of evidence report about DAIR including both THA and total knee arthroplasty (TKA) cases, whereas a differentiation of the results between both primary surgeries is not possible[15-28]. Similar to that, other studies present data only about small case series[29-31]. We represent the opinion that the proper identification of relevant studies is crucial when a systematic literature review is performed.

The findings of the present review indicate that the infection eradication rates with regard to prosthesis retention are lower compared to those reported after one- or two-stage revision surgery[5]. Although single studies demonstrated high success rate exceeding 90%, the relative small number of patients treated as well as the low level of evidence does not allow for generalization of conclusions. Two possible causes might be responsible for this lower infection eradication rate: the low power of the included patients of the identified studies, and the patients’ collectives themselves, which are different compared with those treated by one- or two-stage revision arthroplasty.

The present review identified five different treatment modalities for management of THA-PJIs with varying success rates. Especially older studies showed lower success rates compared to younger ones. This discrepancy might be possibly explained by advances in surgical and debridement techniques, introduction of the vacuum-assisted therapy, use of pulsatile lavage or even antiseptic solutions as well as application of new and more potent antimicrobial drugs. Moreover, some studies present some partly surprising results. Choi et al[9] retrospectively compared 28 cases having prosthesis retention with 65 cases having been treated by staged revision and identified risk factors for infection persistence, whereas different surgical indications were present for acute vs late infections. Infection of revision THA, acute phase treatment (less than four weeks), and polybacterial infection were identified as independent predictors for failure of infection control after initial surgery. The only risk factor associated with failure of infection control at the latest follow-up was the S. aureus microorganism. Additional subgroup analysis to identify other possible contributing factors identified no difference between methicillin-sensitive and methicillin-resistant staphylococcus or head/liner exchange and no exchange[9]. These findings are contradictory to the general acceptance that prosthesis retention is feasible at the site of early infection with a short duration of symptoms. Similar accounts for the non-significant difference between head/liner exchange and no exchange. Theoretically, the change of modular prosthesis components should reduce the bacterial load in the wound, and hence lead to better infection eradication rates. However, Choi et al[9] concluded that retention treatment can be considered an initial treatment option in selected cases of primary THA with a single organism, non-S. aureus infection with 50% chance of infection control and no disadvantages in terms of additional procedure, hospital stay, and treatment duration.

The decision with regard to the ideal treatment procedure for management of PJIs of the hip joint is made based on several factors such as time of infection manifestation, duration of symptoms, local soft-tissue situation, number of prior surgeries, identification of pathogen organism, its virulence and antibiotic resistance profile as well as patient’s comorbidities. Various risk factors have been described that are associated with occurrence of PJI, such as rheumatoid arthritis, diabetes mellitus, malignancy, obesity, and use of immunosuppressive drugs[15,20,32-34]. Revision surgery also increases the risk of PJI[17,33,34]. Factors that have been associated with a worse outcome of PJI treatment including both THA and TKA involve infections caused by Staphylococcus species[15], and more specifically by Staphylococcus aureus and methicillin-resistant Staphylococcus aureus (MRSA)[17,35-37], polymicrobial PJI[20], intra-articular purulence[15], retention of exchangeable components[20], and longer time between initial arthroplasty and PJI diagnosis[16,20,36,38].

Despite the aforementioned known risk factors the ideal treatment procedure is difficult to choose due to the definition of the infection itself. Although several classification systems have been proposed[1-4], the exact definition of an early vs. late periprosthetic infection still remains controversial. This distinguishment is essential since it is widely accepted that only early infections can be successfully treated by prosthesis retention. With regard to early as well as late infections the discrepancy between the several classification systems means that symptoms that are present for several weeks to months might not be ideally treated. The only point that all these systems agree for is the cause for the emergence of each infection[1]. Early infections are attributed to an intraoperative contamination[1]. Delayed or low-grade infections are also attributed to an intraoperative contamination, however an infection manifestation has not evolved due to a small bacteria number, low virulence of the causative organism or adverse local conditions for bacteria growth[1]. Late infections are hematogenously acquired, whereas in 20%-40% of the cases the primary infection source remains unidentified[1]. Acute hematogenous infections take a special place among periprosthetic infections. These infections occur like late infections months after the surgery, are characterized by a sudden onset of symptoms and caused by bacteremia. Practically, all these definitions are an attempt to separate surgically from nonsurgically acquired infections, and the problem is where to draw the line. Clearly, not every early infection is surgically acquired and not all late infections are from other sources[1].

Moreover, an unanswered question regards the insertion of antibiotic-loaded device (cement beads or collagen sponges) when DAIR is performed. To the best of our knowledge, the effect of antibiotic-impregnated beads at the site of DAIR has not been studied. A possible disadvantage of the insertion of beads regards the removal of the beads in an additional surgery. The use of gentamicin-loaded collagen sponges has been described in a few studies in the treatment of PJI[39-41].

In conclusion, the present literature review shows that debridement, irrigation, antibiotic therapy, change of modular prosthesis components and prosthesis retention is an acceptable solution in the management of early and acute hematogenous periprosthetic hip joint infections. Factors that have been associated with a worse outcome of PJI treatment involve infections caused by Staphylococcus species, and more specifically by Staphylococcus aureus and MRSA, polymicrobial PJI, intra-articular purulence, retention of exchangeable components, and longer time between initial arthroplasty and PJI diagnosis. The current literature does not allow for generalization of conclusion with regard to the best treatment modality. A large, multi-center study is required for identification of the optimal treatment of these infections.