Osteoclasts are unique in their capacity to resorb bones: perturbation of osteoclast differentiation or function results in loss of BM cavities, a condition termed osteopetrosis[25-30]. Macrophage colony stimulating factor (M-CSF) and receptor activator of nuclear factor kappa B ligand (RANKL) are cytokines[31-35] that play a crucial role in inducing osteoclastogenesis[36-41]. Loss of M-CSF and RANKL, and c-Fos, a transcription factor required for osteoclastogenesis, via mutation or gene-targeting in animal models, impairs osteoclastogenesis and BM cavity formation, an osteopetrotic phenotype[25,26,28]. In contrast, loss of osteoprotegerin (OPG), a decoy RANKL receptor that inhibits osteoclastogenesis[42-45], accelerates osteoclastogenesis in mice and promotes an osteoporotic phenotype[46,47]. Osteoclast activity is reportedly upregulated following serial granulocyte colony-stimulating factor (G-CSF) injection[48], which stimulates HSPC mobilization to the periphery[49-61]. Furthermore, osteoclasts reportedly induce HSPC mobilization[62-64]. Osteoclasts were also reportedly involved in regulating the HSC niche in the bone marrow[65-70]. Thus far, however, hematopoiesis and HSPC mobilization in animals lacking M-CSF, RANKL, c-Fos or OPG remained uncharacterized before our study.

The chemotherapeutic agent 5-fluorouracil (5-FU) kills cycling cells. Since hematopoietic stem cells (HSCs) are maintained in a quiescent state, HSCs are resistant to 5-FU induced cell death. Thus, serial 5-FU injection has been utilized to evaluate HSC cell function and maintenance in vivo[71-74]. We hypothesized that osteopetrotic mice show a reduced HSC pool and function due to lack of BM cavities and niches. Indeed, we found that op/op mice were lethally susceptible to serial 5-FU injection[75]. However, RANKL- and c-Fos-deficient mice were not as susceptible to serial 5-FU injection as op/op mice were[75]. These results suggest that osteoclasts and BM cavities are not required for HSC maintenance, while M-CSF likely functions in resistance to 5-FU-induced myelosuppression. Indeed, we found that serum M-CSF concentrations increase during 5-FU-induced myelosuppression and that various tissues from M-CSF-deficient op/op mice exhibit serious bacterial infections, suggesting that M-CSF expression antagonizes infection during myelosuppression[75]. 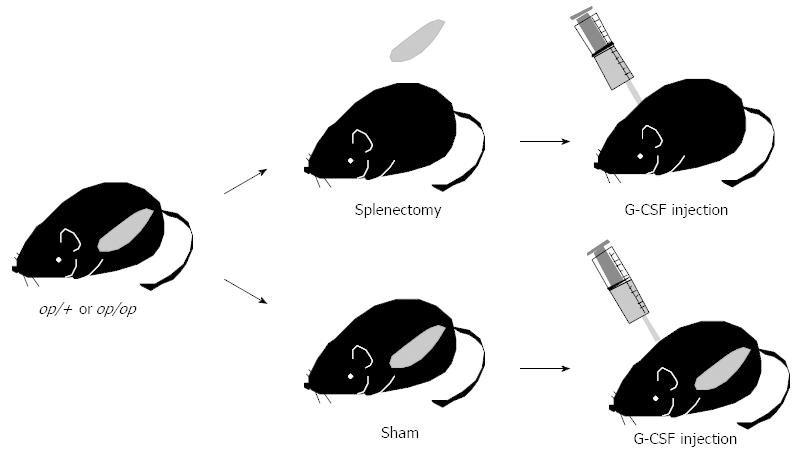 Recently, F4/80-positive bone-lining cells termed “osteomacs” have been identified[78] and demonstrated to play a crucial role in regulating hematopoiesis in vivo[18]. Osteomacs reportedly regulate osteoblast function and help retain HSPCs in BM cavities and osteomac loss is predicted to mobilize HSPCs to the periphery[18]. Since osteomacs were once thought to be identical to osteoclasts, increased mobilization seen in osteoclast-less animals was considered due to the loss of osteomacs/osteoclasts. Indeed, we observed decreased numbers of osteomacs in op/op mouse bones[75]. However, F4/80-positive osteomacs were detected normally in RANKL-deficient and c-Fos-deficient mice, indicating that osteomacs are not osteoclasts[75]. F4/80 is reportedly not expressed in osteoclasts[79], further suggesting that osteomacs are a different cell type.

ROLES OF OSTEOCLASTS AND BM CAVITIES IN HEMATOPOIESIS AND HSPC MOBILIZATION

In most mammalian and avian species, including humans and mice, hematopoiesis occurs in BM cavities and HSC daughter cells are mobilized to the periphery. To continuously supply hematopoietic cells throughout an animal’s life, HSCs must self-renew and be capable of producing multiple lineages[98]. Protection of HSCs from various stresses is crucial to maintain lifelong hematopoiesis. To maintain function, HSCs locate in a specific microenvironment in BM cavities termed the “niche”, where cells normally remain quiescent. Niches consist of various cell types, including osteoblasts, reticular cells, endothelial cells and osteoclasts, and corresponding products of these cells, such as Cxcl12 (SDF1), Angiopoietin 1 and N-Cadherin. Increased osteoblastogenesis reportedly increases the HSC pool, while degradation of Cxcl12 or surrounding extracellular matrix protein is required for HSPC mobilization to the periphery[9,10,20]. Since osteoclasts express high levels of matrix-degrading enzymes, such as matrix metalloprotenase 9 (MMP9) and Cathepsin K[99-105], and osteoclast activity increases following G-CSF injection[48], osteoclasts were predicted to be critical for HPSC mobilization through degradation of Cxcl12 and matrix protein[62]. In our study, we found that HSPC mobilization to the periphery was induced at comparable or even higher rates than that seen in controls following serial G-CSF injection of three independent osteoclast-less and therefore BM-less mice, phenotypes also seen in wild-type mice treated with two independent osteoclast inhibiting agents[75]. These findings suggest that osteoclasts and BM cavities are dispensable for HSPC maintenance and mobilization. However, it is important to note that we did not induce HSPC mobilization by bleeding or injection of LPS or cytokines, but rather treated wild-type adult mice with one bisphosphonate and one antibody. Nonetheless, our study, at least in part, demonstrates that osteoclast-less and BM cavity-less conditions or conditions in which osteoclasts are severely inhibited do not necessarily prohibit HSPC mobilization. 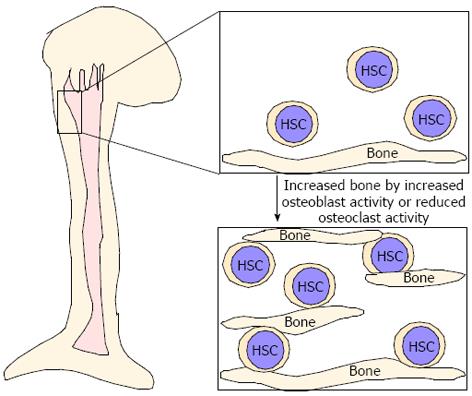 Osteoclasts emerge in the presence of M-CSF and RANKL: mutational inactivation of M-CSF or targeted disruption of RANKL results in osteoclast differentiation failure and BM cavity-less osteopetrotic phenotypes[25,28]. Recently, a neutralizing antibody against RANKL, named Denosumab, was utilized to treat osteoporosis patients and found to promote significantly reduced osteoclast activity and elevated bone mineral density compared with non-treated placebo controls[90]. Similarly, neutralizing antibody against mouse RANKL increases bone mass[94]. That antibody could be a useful tool to analyze effects of osteoclast-inhibiting conditions in mouse models. The increasing number of osteoporosis patients is now a pressing problem in developed countries and many are treated with osteoclast-inhibiting agents such as bisphosphonates. Future analysis of the effects of these drugs on the systems other than the bone system, such as hematopoiesis, is required to evaluate potential adverse affects of these agents in the future.