AIM: To quantify and reduce the errors in visual estimation of knee flexion contractures during total knee arthroplasty (TKA).

METHODS: This study was divided into two parts: Quantification of error and reduction of error. To quantify error, 3 orthopedic surgeons visually estimated preoperative knee flexion contractures from lateral digital images of 23 patients prior to and after surgical draping. A repeated-measure analysis of variance was used to compare the estimated angles prior to and following the placement of the surgical drapes with the true knee angle measured with a long-arm goniometer. In an effort to reduce the error of visual estimation, a dual set of inclinometers was developed to improve intra-operative measurement of knee flexion contracture during TKA. A single surgeon performed 6 knee extension measurements with the device during 146 consecutive TKA cases. Three measurements were taken with the desired tibial liner trial thickness, and 3 were taken with a trial that was 2 mm thicker. An intraclass correlation coefficient (ICC) was calculated to assess the test-retest reliability for the 3 measurements taken with the desired liner thickness, and a paired t test was used to determine if the knee extension measurements differed when a thicker tibial trial liner was placed.

RESULTS: The surgeons significantly overestimated flexion contractures in 23 TKAs prior to draping and significantly underestimated the contractures after draping (actual knee angle = 6.1°± 6.4°, pre-drape estimate = 6.9°± 6.8°, post-drape estimate = 4.3°± 6.1°, P = 0.003). Following the development and application of the measurement devices, the measurements were highly reliable (ICC = 0.98), and the device indicated that 2.7°± 2.2° of knee extension was lost with the insertion of a 2 mm thicker tibial liner. The device failed to detect a difference in knee extension angle with the insertion of the 2 mm thicker liner in 9/146 cases (6.2%).

CONCLUSION: We determined the amount of error associated with visual estimation of knee flexion contractures, and developed a simple, reliable device and method to improve feedback related to sagittal alignment during TKA.

Core tip: Fixed flexion contractures of even 1° have been reported to result in inferior outcomes after total knee arthroplasty. Despite the importance of correcting flexion deformities during surgery, the knee angle is often estimated visually. We developed an intraoperative measurement device that was highly reliable (intraclass correlation coefficient = 0.98) and was able to detect a loss of knee extension with the placement of a 2 mm thicker trial polyethylene liner in 93.8% of cases.

During total knee arthroplasty (TKA), surgeons often visually evaluate the angle of knee extension when determining if additional soft tissue releases or bony resection are required to correct flexion contractures. However, with the knee draped and tourniquet inflated, errors in the estimation of knee extension angle may occur as the surgeon can no longer visualize the location of the hip joint. The purposes of this two-part study were to (1) determine the effect of surgical draping and tourniquet inflation on visual estimation of knee flexion contractures, and (2) develop and evaluate an inexpensive manual tool to provide surgeons with accurate and reliable measures of knee extension angle during TKA.

Patients electing to undergo primary TKA (n = 23, age = 64.5 ± 10.9 years, body mass index = 32.2 ± 5.9 kg/m2) volunteered to participate in this IRB-approved study designed to better understand the magnitude of errors in visual estimation of knee flexion contractures during TKA. Once the patient had been anesthetized and in a supine position, a member of the surgical team lifted the operative limb into 20°-30° of hip flexion with the foot rotated so that the second toe was pointed towards the ceiling in order to neutrally align the knee. The preoperative knee flexion contracture was then measured using a long-arm goniometer prior to the placement of surgical draping and tourniquet. Digital photographs of the lateral aspect of the surgical limb were taken prior to and after the placement of standard surgical drapes and inflation of the tourniquet. The camera location for all of the photographs was perpendicular to the operative leg and consistently placed 183 cm from the table. The knee was centered within the camera’s field of view, and the hip, knee, and ankle were fully visible prior to draping, after the knee had been partially draped, and after the knee had been fully draped and the tourniquet inflated.

Three board-certified orthopedic surgeons individually estimated the degree of knee flexion contracture from each of the photographs. The order of the resulting 69 images was randomized and the surgeons were blinded to their previous responses as well as the responses of the other surgeons.

The aforementioned results demonstrated a need to reduce the risk of uncorrected flexion contractures by providing surgeons with more accurate and reliable methods to measure knee flexion contractures during TKA. A simple, inexpensive tool that consisted of two inclinometers, both of which featured a freely moving angle indicator arm with an inferior counterweight, was developed with an inferior counterweight was developed (Biomet, Warsaw, IN, United States). After placement of the trial components, the inclinometers were used to measure the resulting degree of flexion contracture. The tibial inclinometer was designed to slide over the handle of the tibial trial inserter, and a set screw was tightened to ensure that it was properly fixed to the handle of the inserter. A drill pin was then inserted into the femoral trial, and the femoral inclinometer was placed on the drill pin (Figure 1). As the leg was positioned in approximately 30° of hip flexion, the degree of knee flexion contracture was measured as the difference between the 2 angles indicated on the tibial and femoral inclinometers. Simply put, if the two inclinometers were divergent when viewing from the lateral aspect of the knee, then full extension had not been achieved whereas if the two inclinometers were convergent, then the knee was in hyperextension. Full extension (0°) was present if the two were parallel. 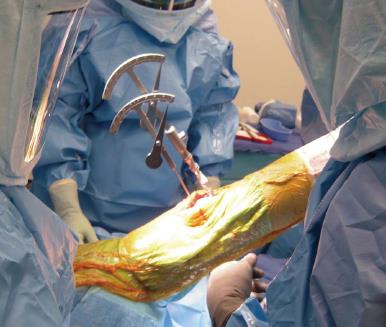 Figure 1 Intraoperative use of the knee flexion contracture measuring device.

The resulting value was the combination of the angular difference between the femur and tibia, but also included the relative degree of flexion or extension of the femoral component and the degree of posterior slope of the proximal tibial cut (Figure 2). For example, a surgeon performing cruciate-retaining TKA preferred to make the proximal tibial cut with 3° of posterior slope. If in this example the femoral component was properly aligned in the sagittal plane (neither flexed nor extended), then the difference between the study device’s two inclinometers would be -3° (the two pins would be convergent indicating hyperextension). The knee itself; however, would truly be in full extension (0°) as the 3° posterior slope of the tibial component would create the appearance of hyperextension. 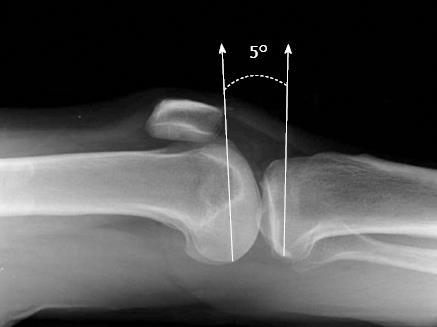 Figure 2 The effect of posterior slope of the proximal tibial cut on the measurements with the study device. If the femoral and tibial components were both placed perpendicular to the long axis of each bone as pictured, then the study device would indicate the presence of a 5° flexion contracture. However, if the proximal tibia was cut with 5° of posterior slope, it would give the false impression that full extension had been achieved as the two inclinometers would be parallel.
Statistical analysis

To evaluate the errors of visual estimation, a repeated-measure analysis of variance was used to compare the estimated angles prior to and following the placement of the surgical drapes and tourniquet inflataion with the preoperative flexion contracture measured with the long-arm goniometer. To evaluate the efficacy of the novel device, we assessed the consistency of measurement and the ability to detect a change in angle. A single surgeon performed 6 knee flexion contracture measurements with the study device during 146 TKA procedures (141 patients). Three of the measurements were made with the intended polyethylene thickness, and 3 measurements were taken with the insertion of a trial liner that was 2 mm thicker than the intended liner. An intraclass correlation coefficient (ICC) was calculated to assess the test-retest reliability for the 3 repeated flexion contracture measurements. To evaluate ability to detect a change in knee angle, we compared the measurements with the 2 different liner thicknesses using a paired t test. All statistical analyses were performed using SPSS Statistics version 20 (IBM, Armonk, NY, United States).

The purposes of this two-part study were to determine the effect of surgical draping and tourniquet inflation on visual estimation of knee flexion contractures, and develop and evaluate an inexpensive manual tool to provide surgeons with accurate and reliable measures of knee extension angle during TKA. It was evident after Part I of this study that the ability to correctly estimate the degree of extension during TKA becomes more difficult when the knee is draped.

The novel device used in this study provided a consistent method to intraoperatively measure knee flexion contractures without the added expense or operative time associated with computer-assisted navigation or other electronic sensors.

Fixed flexion contractures of even 1° have been reported to result in inferior outcomes after total knee arthroplasty (TKA). Despite the importance of correcting flexion deformities during surgery, the knee angle is often estimated visually.

The authors developed an intraoperative measurement device that was highly reliably and was able to detect a loss of knee extension with the placement of a 2 mm thicker trial polyethylene liner in 93.8% of cases.

The simple, inexpensive device used in this study may allow surgeons to more consistently correct flexion deformities during TKA.

This is a well done, interesting paper, presenting strong data.