Infantile Blount’s disease is a condition that causes genu varum and internal tibial torsion. Treatment options include observation, orthotics, corrective osteotomy, elevation of the medial tibial plateau, resection of a physeal bar, lateral hemi-epiphysiodesis, and guided growth of the proximal tibial physis. Each of these treatment options has its disadvantages. Treating the coronal deformity alone (genu varum) will result in persistence of the internal tibial torsion (the axial deformity). In this report, we describe the combination of lateral growth modulation and distal tibial external rotation osteotomy to correct all the elements of the disease. This has not been described before for treatment of Blount’s disease. Both coronal and axial deformities were corrected in this patient. We propose this combination (rather than the lateral growth modulation alone) as the method of treatment for early stages of Blount’s disease as it corrects both elements of the disease and in the same time avoids the complications of proximal tibial osteotomy.

Infantile tibia vara (infantile Blount’s disease) is an orthopedic condition that affects young children causing varus deformity of the knee. The treatment of this condition differs according to the degree of involvement of medial proximal tibial physis. Multiple treatment options had been described for this condition[1-10]. These included observation; orthotic[4]; corrective osteotomy (acute or gradual correction)[3,5-9,10,11]; elevation of the medial tibial plateau[2,12,13]; resection of a physeal bar[1]; lateral hemi-epiphysiodesis[14]; and guided growth of the proximal tibial physis[8].

There has been increasing interest in treating infantile Blount’s disease by guide growth modulation[8]. The principle of guided growth modulation depends on inhibiting the growth on the lateral aspect of the proximal tibial physis while allowing the medial part of the physis to continue growing resulting in correction of the genu varum deformity. This will not result in correction of the internal tibial torsion that is part of the pathology of infantile Blount’s disease[8].

In this case report, we describe a novel method to treat infantile Blount’s disease by combining a proximal lateral tibial growth modulation with distal tibial osteotomy to achieve both full correction of the deformity and decrease the risks of complications to the patient.

The child underwent surgery to perform lateral proximal tibial growth modulation by inserting lateral tension band plate (eight plate) (Orthofix, Lewisville, Texas) (reversible plate hemi-epiphyiodesis) to correct the varus deformity. In addition, distal external rotation osteotomy of the tibia and fibula was performed to bring the foot to 5° external rotation compared to the knee axis. The external rotation osteotomy was done at the level of the distal tibia and fibula (junction proximal ¾ with the distal ¼). After rotation of the distal part, 3 crossing K-wires were passed across the osteotomy to stabilize it. Bilateral above knee casts were applied and patient was instructed to be non weight bearing for 6 wk on wheel chair (Figure 2). 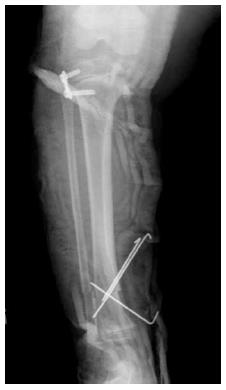 Ten months later, follow up of the patient shows that she had full correction of both the varus deformity and the internal rotation deformity that was previously present. The radiographs showed correction of the varus deformity of the knee. The mechanical axis on the right side is 0.4 cm medial to the center of the knee and on the left side was 1.1 cm lateral to the center of the knee. The angle between the mechanical axis of the femur and mechanical axis of the tibia (mechanical tibio-femoral angle) was 0° on the right side and 7° valgus on the left side. The osteotomy side distally was completely healed. The 8 plates were removed bilaterally (Figure 3). 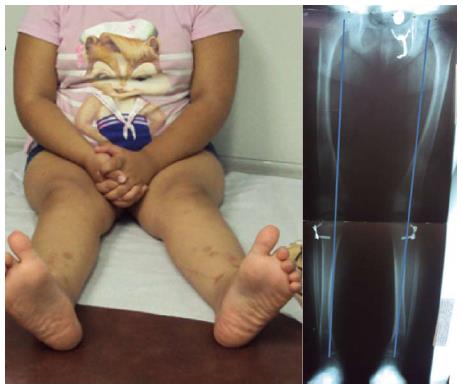 Figure 3 Ten months post operative showing. A: Correction of both the genu varum and the internal rotation of the leg (clinical picture); B: Correction of the varus deformity and healing of the osteotomy sites (radiograph).

Consent was obtained from the mother to publish the case of her daughter.

Tibial osteotomy is usually the standard of treatment for these children. The correction after tibial osteotomy can be done acutely with internal or external fixation. Acute correction carries the risk of compartment syndrome, under and overcorrection of the deformity[16-19]. A prophylactic anterior compartment fasciotomy and insertion of a drain is recommended for patients with Blount disease who are undergoing acute deformity correction to decrease the chance of compartment syndrome[20]. Gradual correction by external fixator lead to more accurate correction of the deformity with less chance of compartment syndrome, however, external fixators are usually not very well tolerated by the children due to their marked obesity and need to have bilateral fixators applied simultaneously in most cases. Another inherent problem with proximal tibial osteotomy to treat infantile tibia vera is that it is usually done away from the center of the deformity as the center of rotation and angulation (CORA) in cases of Blount disease lies at (or very close to) the level of the proximal tibial physis. Most of osteotomies are performed distal to the correct CORA because fixing very proximal osteotomies (at the level of the physis) is very technically challenging. This will result in displacement of the mechanical axis. Osteotomies done away from the CORA requires translation with the angular correction otherwise it will lead to shift of the mechanical axis of the limb[21].

Recently, there has been growing interest in using guided growth in treating early cases of infantile Blount’s disease[8,22]. The procedure has the advantage of being minimally invasive, gradual correction with minimal risk and avoiding most of the complications of osteotomies. Also, the correction will occur at the center of deformity (CORA) avoiding any deviation of the mechanical axis of the corrected limb. The patient is followed until his/her mechanical axis of the limb reaches neutral alignment (or slight valgus) and then the tether (plate or staples) is removed. The tether is applied to the proximal lateral growth plate of the tibia, and it is not necessary to restrict the growth of the proximal fibular physis. Using the guided growth to treat early stages of infantile Blount disease will gradually correct the varus deformity but should theoretically have no influence on the internal tibial torsion. This will cause incomplete correction of the deformity and persistence of negative foot progression angle.

A recent retrospective study described the use of lateral tension plate to treat infantile Blount’s disease[8]. Twelve children (18 limbs) had treatment of infantile Blount disease with application of lateral proximal tibial tension band plates. The success rate of growth manipulation in this group was 89%. Despite this high success rates, the authors stated that in 3 patients (25% of the population), there was persistence of a significant internal tibial torsion.

We propose a combination of the lateral growth modulation with distal tibial/fibular rotational osteotomy that can effectively and safely correct both elements of the pathology of the Blount’s disease. The application of lateral tether will correct the varus deformity and the distal external rotation osteotomy will correct the internal tibial torsion.

The advantages of this combination are the following: (1) It has the advantage of using growth tethering which is: The deformity is corrected at CORA which is biomechanically the best option. The deformity is corrected gradually with a chance to monitor the effect of treatment and obtain the exact desired amount of correction; (2) The internal rotation deformity will be corrected and not left without treatment; and (3) The external rotation osteotomy is done in a safer area (distally rather than proximally) with less concern regarding development of compartment syndrome[23,24].