METHODS: Participants were 43 undergraduate students of a Swiss University. The study was designed as a randomized controlled trial (RCT) with randomized group allocation. The RCT consisted of two groups each given 12 training sessions during four weeks with either 5 Hz- Training frequency (training condition) or 1.5 Hz Training frequency (control condition). Outcome was current musculoskeletal pain assessed in the evening on each day during the four week training period.

Stochastic resonance training (SR-WBV) is a form of whole-body vibration training with randomized vibration. Because the vibration is stochastic, the direction and the force-time behaviour of the vibrations is not foreseeable and the body will be constantly challenged to adapt the muscle reactions to regain balance[1-3]. SR-WBV seems to provoke an interaction of different types of sensors and the adjustment of afferent and efferent signals, possibly acting as “training” for the sensorimotor system, even more so than other conventional sinusoidal vibration[4]. A strength increase is mainly attributed to neural adaptation, leading to improved inter- and intramuscular coordination that allows to more fully activate prime movers in specific movements and to better coordinate the activation of all relevant muscles[5]. A low injury-risk and the only rare appearance of side-effects make whole body vibration training an interesting preventive intervention[6]. Until today there is first evidence that SR-WBV can have positive effects on pelvic floor muscle strength[4].and musculoskeletal pain in metal manufacturing workers[7]. There is, however still a specific lack of high quality studies in healthy volunteers with randomized allocation of participants to an effective training group and a control group that similar except that the training frequency is so low that no effect can be expected. As Pang[6] put it in his recent review on WBV effects an important problem until now is that “It is unclear whether the reported benefits are related to the exercise itself or the addition of vibration during exercise”. The present study is a randomized trial with training and control conditions that differ only in frequency of training frequency and participants who are blinded with respect to conditions fulfilling high qualitative methodological standard on randomized controlled trial (RCT)[8].

In most studies on SR-WBV, the control group does no training at all (waiting group), or does an alternative training that is rather different. As a consequence, the results are not clear with respect to specific effects of SR-WBV: In waiting control groups positive training effects might simply reflect the unspecific effect “of doing something” instead of “doing nothing” and in studies that include an alternative training SR-WBV not only differs stochastic vibration principle but in many other aspects (frequency, posture, etc.). Consequently the unique advantage of stochastic vibration is unclear unless control groups differ in frequency only. Hence, a control group should include such a low training frequency that participants are still blinded with respect to their condition (i.e., they still think to take part in an useful training group) while the frequency is certainly ineffective. In this study, the frequency of vibration was 1.5 Hz, resulting in floor plates that move with lowest frequency that is possible aside standing still and is precluded to have a training effect that is specifically caused by stochastic vibration. Instead, a potential training effect of the 1.5 Hz training must rely on effort in posture control. The frequency of 5 Hz was chosen for the “functional” 5 Hz training group as the lowest stochastic vibration frequency reported to be effective[9]. Thus, the present study compares a four-week stochastic resonance training in a “functional” 5 Hz training group to a “nonfunctional” 1.5 Hz control group.

All participants gave their informed consent prior to their inclusion in the study. The study was performed in consensus with all requirement defined by the Swiss Society of Psychology. The study was conducted with the understanding and the consent of the human subject. The Ethical Committee of the responsible University faculty has approved the study.

All exercising sessions were supervised and the participants were advised on adequate posture. Participants were instructed to stand in an upright position on the footboards with arms hanging loose to the side and slightly bent knees and hip. Vibration frequency was fixed previously according to the training condition. A session consisted of three sets of vibration, lasting one minute each, with a one-minute break in between. Three such sessions per week were planned for each participant. This setting was based on empirical experience and practical application more than on scientific evidence, because the training parameters of SR-WBV show a wide range of application that are not as well known as they are in strength or endurance training[9]. The conducted 60-second interventions and 60-second rest periods and 5 Hz frequency training condition was used as the minimum effective vibratory stimulation loading parameter while the 1.5 Hz frequency condition can be expected to have no training effect[9]. Participants were blind with respect to their training frequency condition. All displays of Zeptor who showed the frequency were covered during training. The investigator did the setting of frequency before the training sessions while another person who was blind to training conditions welcomed, introduced, and instructed the participants.

Pain was rated in the evening of each day during the four week training period. The questionnaire thus had one page per day for seven days, including Saturdays and Sundays. The item for current musculoskeletal pain was phrased according to the chronic pain grade questionnaire[10] with adjustments for the time scope in daily measurement. The current pain measurement was introduced by: “Throughout the day, how do you rate your pain in muscles and joints (back pain, shoulder and neck pain, pain in leg muscles etc.)?”. The pain item included a ten-point numerical rating scale (1 = no pain to 10 = strongest imaginable pain), which shows good sensibility and responsiveness to change, is easy to administer, shows high compliance and good correlations with other pain assessment instruments[11].

Because differences between participants, as well as within participants over time in outcomes were expected, the intercept was conceptualized as random effect on both levels. Since overall effect of SR-WBV and mean rate of change was of primary interest in the present study (each day), time, training effect and training effect over time as predictors were all set as fixed effects. Hence, the regression model assumed the reduction of musculoskeletal pain over time and in dependence of training therefore to be equal for all participants, i.e., no variation in individual regression slopes was postulated. The general model used to test the preventive effects of SR-WBV on musculoskeletal pain contained only these three variables. It is represented by the following equation: painij =β0ijconstant + β1ijday of training period + β2ijSR-WBV verum vs sham condition + β3ijSR-WBV condition X day of training period

Before the training study started, participants reported musculoskeletal pain (yes/no) in the last four weeks. Back pain (30.2%) and neck pain (27.9%) were most prevalent, followed by pain in the knee (25.6), shoulder and arm (14%), ankle and foot (11.6%), and pain in the hip (9.3%). However, only 3 participants reported a medical consultation in last four weeks, two participants because of pain in shoulders and one participant because of pain in the knee. The 43 participants were randomly picked from a list and a number between 1 and 43 was assigned to them. Using a software random sequence generator (random.org©)[14] the numbers were randomly assigned to study groups. The resulting groups of 21 and 22 participants did not differ significantly in reported musculoskeletal pain in four weeks before SR-WBV started, current muscular pain at first training day, age, and sex composition. 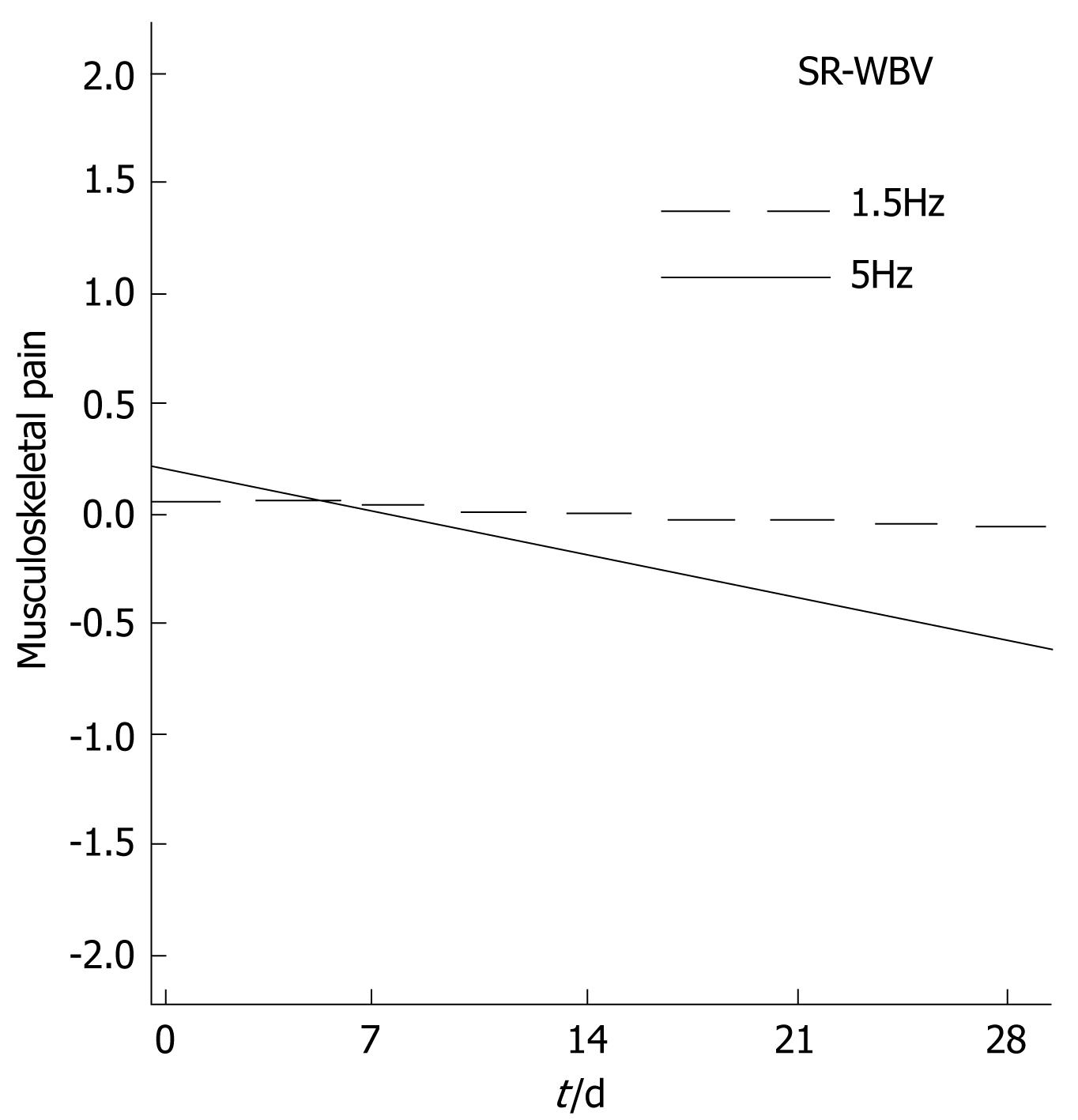 Stochastic vibration training can be considered effective[15] while the metabolic and cardiovascular strain is low[16]. Evidence increases for positive effects in clinical samples[17] and athletes[18,19]. There are, however, few studies on other more representative populations[15]. Moreover, studies often suffer from methodological flaws that include studies that use randomized allocation of participants to training conditions. In addition, studies often rely on control conditions that consist of waiting groups only, i.e., a vibration training is compared to “doing no training”. If the control group includes another training condition, the training often differs from SR-WBV in many ways, not only stochastic vibration frequency but postures efforts, etc. Beside the methodological problem of confounded effects, i.e. the problem to verify stochastic vibration as the only causing the effect and no other feature of SR-WBV that differs from the control training, another problem arises: Participants cannot be blinded in most SR-WBV trials that rely on waiting groups or other trainings, because they easily notice. Therefore, in order to increase the internal validity of RCT, this study includes a control group with “nonfunctional” sham SR-WBV to include the principle of blinding to participants. In this study, following the ACOEM criteria for methodical evaluation of RCTs[8], participants were blinded with respect to training groups and the study therefore fulfilled a rarely reached qualitative point in evaluation of SR-WBV. The current study included training of healthy young participants without a back pain problem and found reduced musculoskeletal pain in the “functional” 5 Hz training condition but not in the “non-functional” control condition with 1.5 Hz SR-WBV. Noteworthy, the test of SR-WBV showed the difference in training effect using a low frequency of 5 Hz that already is on the lowest level of what training experts expect to be functional[9]. Thus, SR-WBV was proven effective in a healthy young sample with lowest training effort that was considered potentially valuable before. SR-WBV is also potentially efficient considering the low effort of training (approx. 24 min a week).

To the knowledge of the authors, it was the first study examining SR-WBV in a healthy sample using a fully comparable control group including blinded participants. This study indicates that SR-WBV may help to reduce musculoskeletal pain even in healthy young adults. SR-WBV was shown to be a very economic exercise which requires very little effort in terms of infrastructure, time and effort from participants. Promoting SR-WBV might be a way to address people who are not susceptible to conventional exercise.

There is need for research on short, economic, and effective training intervention. In this RCT author(s) showed a short SR-WBV to reduce musculoskeletal pain.

The RCT showed benefits were specifically related to frequency of stochastic resonance.

SR-WBV at work is a promising tool in prevention of occupational musculoskeletal problems.

It is interesting and important. A solution of stochastic resonance whole-body vibration that reduces musculoskeletal pain in young healthy individuals is an important point in daily orthopedic practice.