Autologous nerve grafting remains the gold standard for the management of nerve gaps following peripheral nerve injury. Use of autologous nerve grafts is bounded by the limited amount of available tissue and the increased donor site morbidity. Several surgical alternatives have been reported with various success. These include the combination of nerve grafts and silicon tubes[1], the use of synthetic or biologic nerve conduits[2], tubes containing blood vessels[3],the application of cultured Schwann cells[4] and end-to-side neurorrhaphy.

It was not until 1992, when Viterbo et al[5] reintroduced end-to-side neurorrhaphy, an almost forgotten technique of nerve coaptation. End-to-side neurorrhaphy involves coaptation of the distal stump of a transected nerve to the trunk of an adjacent donor nerve. It has been proposed as an alternative technique in cases of peripheral nerve injury, when the proximal stump of an injured nerve is unavailable or obliterated or the nerve gap is too long to be bridged by a nerve graft[6-8].

End-to-side neurorrhaphy was first described by Letievant in 1873 as a reconstructive strategy of peripheral nerves in cases of large substance loss[9]. The pioneer’s idea was abandoned due to poor results that can be attributed to the use of conventional surgical instruments and non-microsurgical techniques without the use of a microscope. Almost nine decades later, many investigators have again experimented using this interesting technique[5,10-15]. The results this time were very promising and since then, many studies have been performed resulting in improvement of functional results and further understanding of nerve regeneration after end-to-side neurorrhaphy.

The mechanism causing collateral sprouting after end-to-side neurorrhaphy may result from switching signals and/or switching factors, presumably neurotrophic[19]. Zhang et al[19] suggested that factors released from the Schwann cells, which have migrated to the epineurium, are transferred into the perineurium by diffusion and promote collateral sprouting from the closest to the injury site to Ranvier’s nodes of the donor nerve.

It is well known that Neurotrophine-3 (NT-3) plays a distinct role in the processes of nerve regeneration and muscle reinnervation[25]. NT-3 and its receptor Trk C are expressed in the coaptation site following end-to-side neurorrhaphy[31]. Growth-associated protein-43 (GAP-43), a marker of growth cone formation, brain-derived neurotrophic factor (BDNF) and Trk B (BDNF receptor) are also detected in the coaptation site in lower concentrations and after NT-3 expression[31]. In an end-to-side neurorrhaphy model using anti-GAP-43 antibody, growth cone direction was recorded from the donor nerve to the peripheral nerve segment of the injured nerve.

Many investigators have also shown the distinct role of nerve growth factor (NGF) during collateral sprouting[32-37]. NGF is produced in end-organs following nerve injury. The secreted NGF is taken up by the axon terminals and transported retrogradely to the nerve cell body stimulating a secondary response. It has been shown that the combination of NGF and ciliary neurotrophic factor (CNTF) promotes axonal regeneration after end-to-side neurorrhaphy[38].

Biological responses of the donor neuron to factors emanating from the transected nerve have been implicated in the initiation of collateral sprouting for both sensory and motor axons. According to previous studies, significant motor functional recovery after end-to-side neurorrhaphy can be achieved without donor nerve axotomy[39,40]. However, more recent studies suggest that donor nerve injury, such as axotomy or suturing, is required for motor reinnervation of the recipient nerve[41,42].

Bontioti et al[41] revealed increased expression of activating transcription factor 3 (ATF3), a marker of cell activation induced in sensory and motor neurons following peripheral nerve injury, after the creation of an epineurial window and/or suturing. According to these findings, an operative injury to the donor nerve during end-to-side neurorrhaphy is the main prerequisite for axonal sprouting.

Viterbo et al[13] first described double end-to-side neurorrhaphy. In this technique, both proximal and distal stumps of the recipient nerve are coapted in an end-to-side fashion to the trunk of an adjacent donor nerve (Figure 1). The regenerated axons use the epineurium of the donor nerve as a bridge to find the distal stump. It has been suggested that this technique stimulates axonal growth by a supercharged effect compared with end-to-end repair. Interestingly, when double end-to-side neurorrhaphy was compared with the conventional end-to-side technique, the recipient nerve following the double terminolateral technique was found to contain a significantly larger number of myelinated nerve fibers distal to the neurorrhaphy site[44]. Two sources of axons may contribute to the increased number of regenerating nerve fibers, axons sprouted collaterally from myelinated nerve fibers at the node of Ranvier of the donor nerve, and axons that arise from the proximally coapted nerve segment. 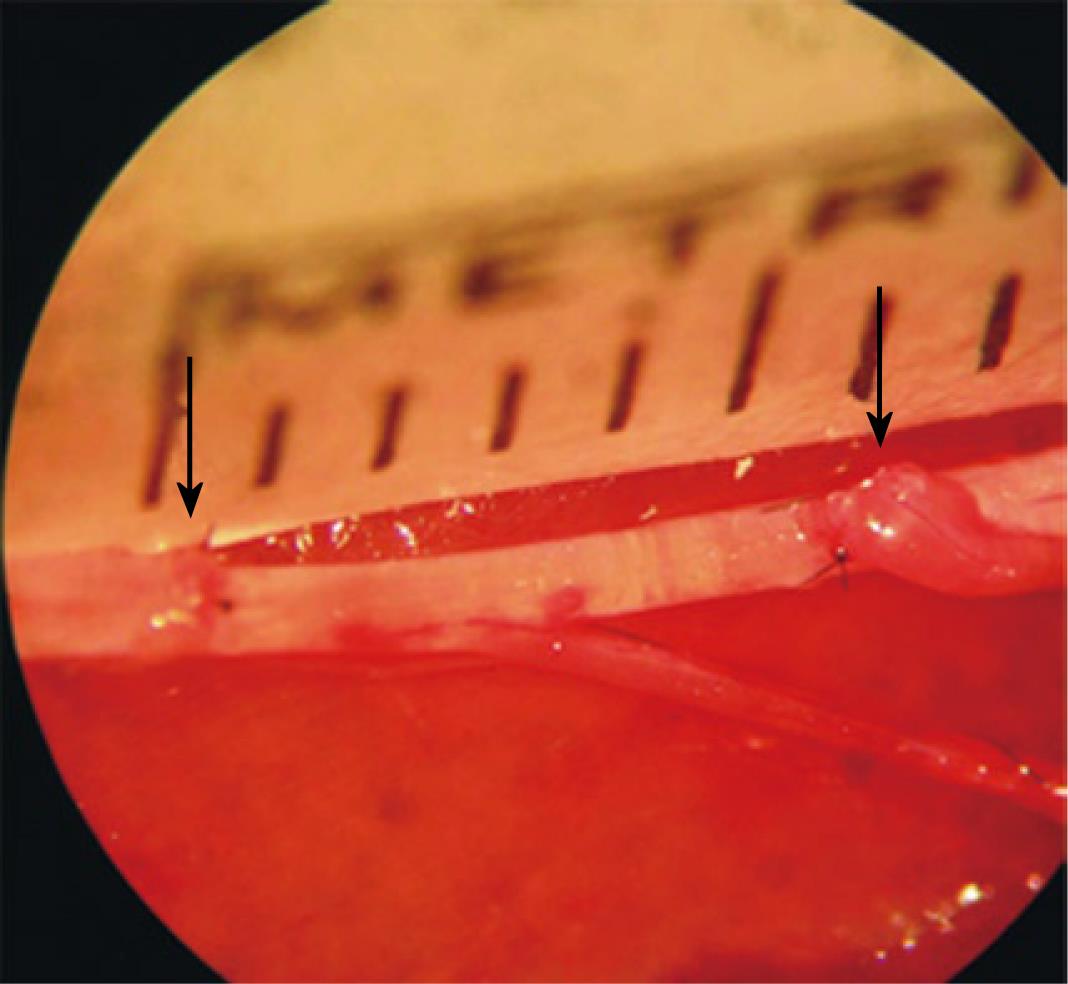 Figure 1 Double end-to-side neurorrhaphy with 0. 6-cm regeneration distance between the proximal and distal stump of the recipient nerve (black arrows). In both neurorrhaphies, coaptation was performed with 3 interrupted 9-0 nylon sutures placed at 120°.

Our experimental knowledge of double end-to-side neurorrhaphy, leads us to the belief that double end-to-side coaptation may be a valuable tool when the classic end-to-end technique is not possible. In our previous studies in rats, functional evaluation and axonal counting data demonstrated that nerve regeneration can be supported using the intact nerve bridge technique for a distance of 1.2 cm in a rat sciatic model[44].

According to some investigators, histologic results were better when a perineurial window was opened[19,20]. This can be attributed to the greater degree of axonal damage to the donor nerve and subsequently the enhanced axonal regeneration after perineurotomy. When fibrin glue is used as an alternative to end-to-side neurorrhaphy, no damage to the donor nerve trunk is produced. This may explain the absence of muscle reinnervation after end-to-side coaptation with fibrin glue, without removing the epineurium[46]. According to our studies, resection of a small part of the epineurium and placement of epineurial sutures without damaging the underlying perineurium improves the functional outcomes following terminolateral nerve repair without compromising the function of the donor nerve (Figure 2)[44]. 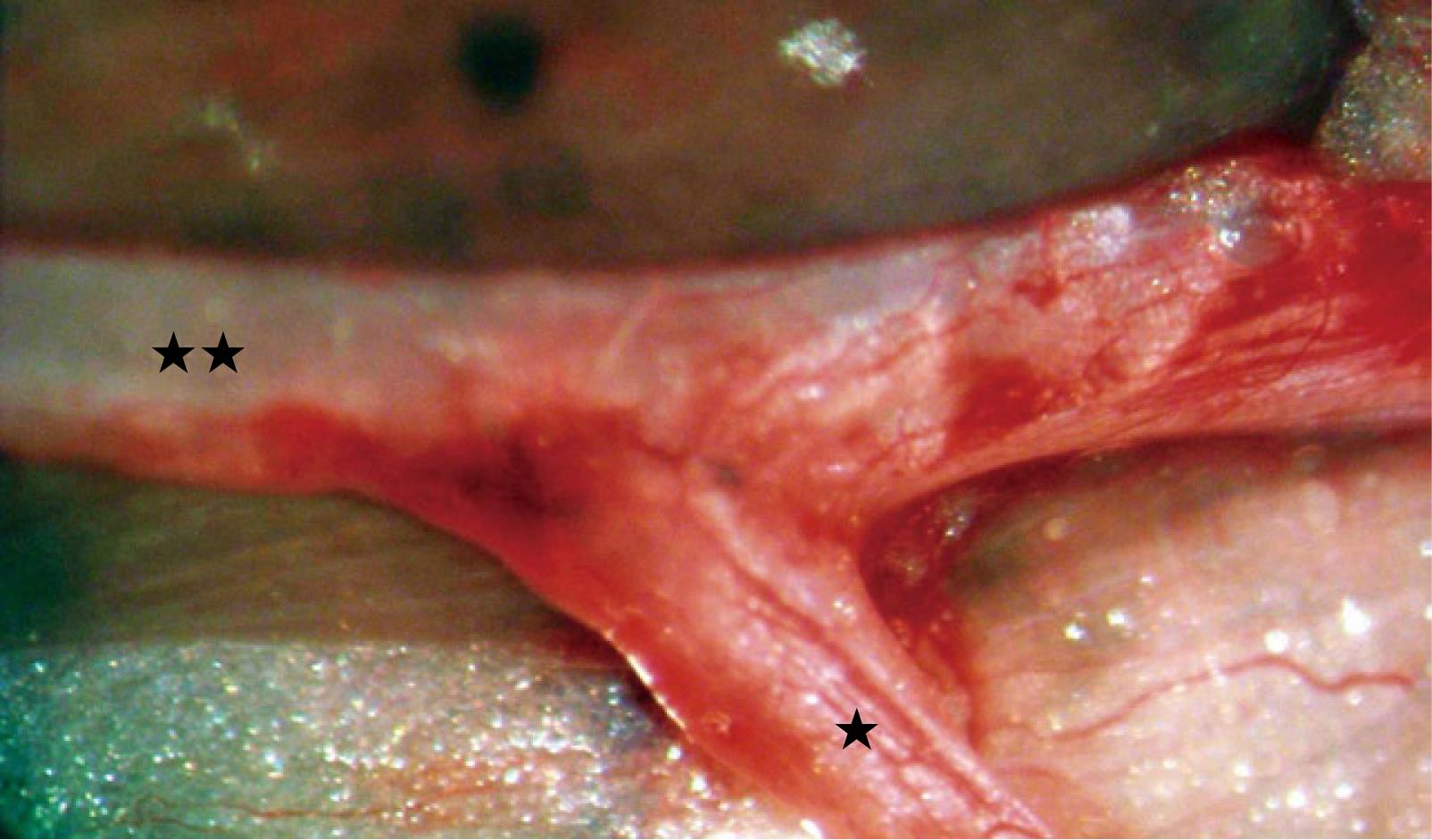 Amr et al[49] reported satisfactory results in 11 cases of brachial palsy injury treated with end-to-side and side-to-side grafting neurorrhaphy. Deterioration in donor muscle motor power was observed in one case, which improved a year later. Santamaria et al[50] sutured the lateral antebrachial cutaneous nerve in an end-to-side fashion to the cervical plexus, posterior auricular, or hypoglossal nerve where it was not possible to preserve the proximal stump of the lingual nerve in twenty-eight patients with tongue cancer who underwent hemiglossectomy and primary reconstruction with innervated radial forearm flaps. Sensory tests were significantly diminished when end-to-side nerve repair was used.

In digital nerve reconstruction, of 5 patients who underwent end-to-side neurorrhaphy four had sensitivity near to completely normal and one patient had a poor result[51]. Satisfactory results in all patients were also obtained in a series of ten nerve defects at the palm or digit level treated by end-to-side neurorrhaphy. Donor nerve injury was recorded in one case[52].