In this single case report study, we describe an anatomical variance of a brachioradialis muscle with two muscle bellies and two tendons with their common insertion on the suprastyloid crest of a distal radius.

After a self-mutilating forearm injury of a borderline personality patient, we observed the anatomical variation of brachioradialis tendon. After tendon repair and aftercare the muscle function recovered completely. Five months after surgery the forearm magnetic resonance imaging was done revealing a supernumerary brachioradialis muscle.

Anatomical variations of forearm muscles and tendons are not rare. The treating surgeons should be aware of their existence and anatomical relationships.

Core Tip: This is a single case report study of an anatomical variation of brachioradialis muscle and its tendons in an injured patient. The postoperative magnetic resonance imaging findings reveal the relationship of the supernumerary and proprius brachioradialis tendons.

A 17 year old female patient cut herself intentionally with textile scissors on her left non-dominant forearm.

At the initial wound examination in emergency department, we found a 8 cm long, deep cut through the skin, subcutaneous tissue and volar forearm fascia 9 cm proximal to the flexion crease with several divided tendons. There were no signs of arterial injury at that time. We didn’t suspect any bone injury either. Due to the clinical examination with loss of sensibility distal to the wound up to the thumb base dorsally, we presumed a superficial sensory nerve injury.

Immobilisation of the wrist was applied, intravenous antibiotics were administrated, tetanus vaccination refreshed and the indication for wound exploration in operation theatre under anaesthesia was determined.

The operation was done with medical loupes with 3.5 magnification. Intraoperatively, we found an 8 cm long oblique wound on the volar distal forearm. It expanded from ulnar proximal to radial distal. We diagnosed a clean cut with retraction of palmaris longus tendon (PL) and flexor carpi radialis tendon (FCR) as well as sharp disruption of a white fibrous anatomical structure radial to the FCR that was also retracted beyond the wound edges (Figure 1). Additionally, we recognized radial to this structure in a very close relationship and running parallel to it what was presumed to be a superficial branch of the radial nerve (SBRN), which was also disrupted. Radial to the nerve we identified the bright tendon of the proprius brachioradialis muscle (BR) that was not injured. Deep dissection revealed no other injuries with intact flexor pollicis longus tendon and normal appearing median nerve. 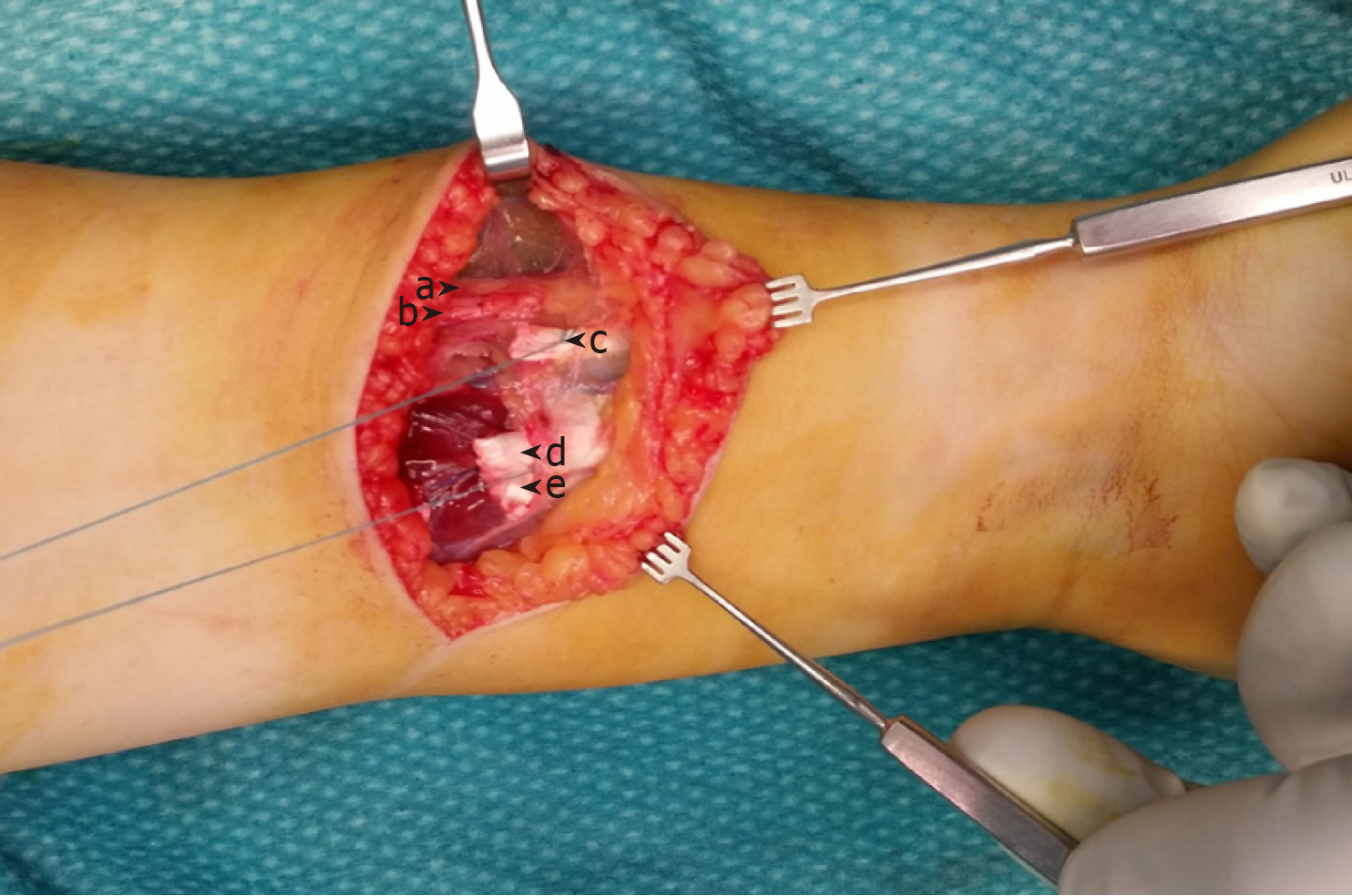 Our attention was attracted to the not identified disrupted white anatomical structure that according to the macroscopic characteristics was assumed to be a tendon. This tendon was in its diameter and shape of the cross section similar to the PL (2 mm × 5 mm). Passive wrist motion did not show any influence on the tension of this structure. Once preparing the distal tendon loop sutures and testing it by pulling on the suspected tendon proximally, we could palpate it subcutaneously and distally almost to the radius styloid. By pulling distally on its proximal end, this structure could be followed by palpating it subcutaneously on its course towards the proximal radial forearm. It was not palpable at the proximal ulnar third of the forearm. End to end suturing of this tendon was practically impossible to achieve with extended elbow due to the distraction of its ends. By flexing the elbow tension was released and we had no problems adapting the tendon in an end-to-end fashion. The dynamic examinations, course as well as the anatomical relationship to BR and presumed SBRN brought us to the conclusion that we might have found an additional aberrant brachioradialis tendon. Further dissection was not necessary for the reconstruction of the injured structures and was not performed.

After finishing all tendon repairs of FCR, PL and supernumerary BR, the epineural adaptation of the presumed SBRN was performed. The surgery was completed with thorough irrigation and wound closure. Postoperatively, we applied a protective dorsal wrist splint. In order to prevent stiffness we did not immobilize the elbow, but advised the patient to wear a dorsal forearm cast with the wrist in neutral position. We recommended avoiding wrist extension, forceful elbow flexion as well as full pronation and supination. Free finger range of motion was encouraged. From week 7-12 postoperatively there was no strict immobilization, but we gave the patient a protective wrist brace for comfort allowing daily mobilisation of the wrist with free ROM with limited strength. Three months postoperatively free mobilisation and strengthening was encouraged.

The follow up at 6, 12 wk and 5 mo postoperatively showed good wound healing without signs of infection (Figure 2A) and good function of the reconstructed tendons. There was still a loss of sensibility as shown in the Figure 2B with a positive Hofmann-Tinel sign over the scar.

Figure 2 Clinical presentation at 5 mo postoperatively. A: Scarification and distance of the scar to the flexion crease; B: The area of loss of sensibility. 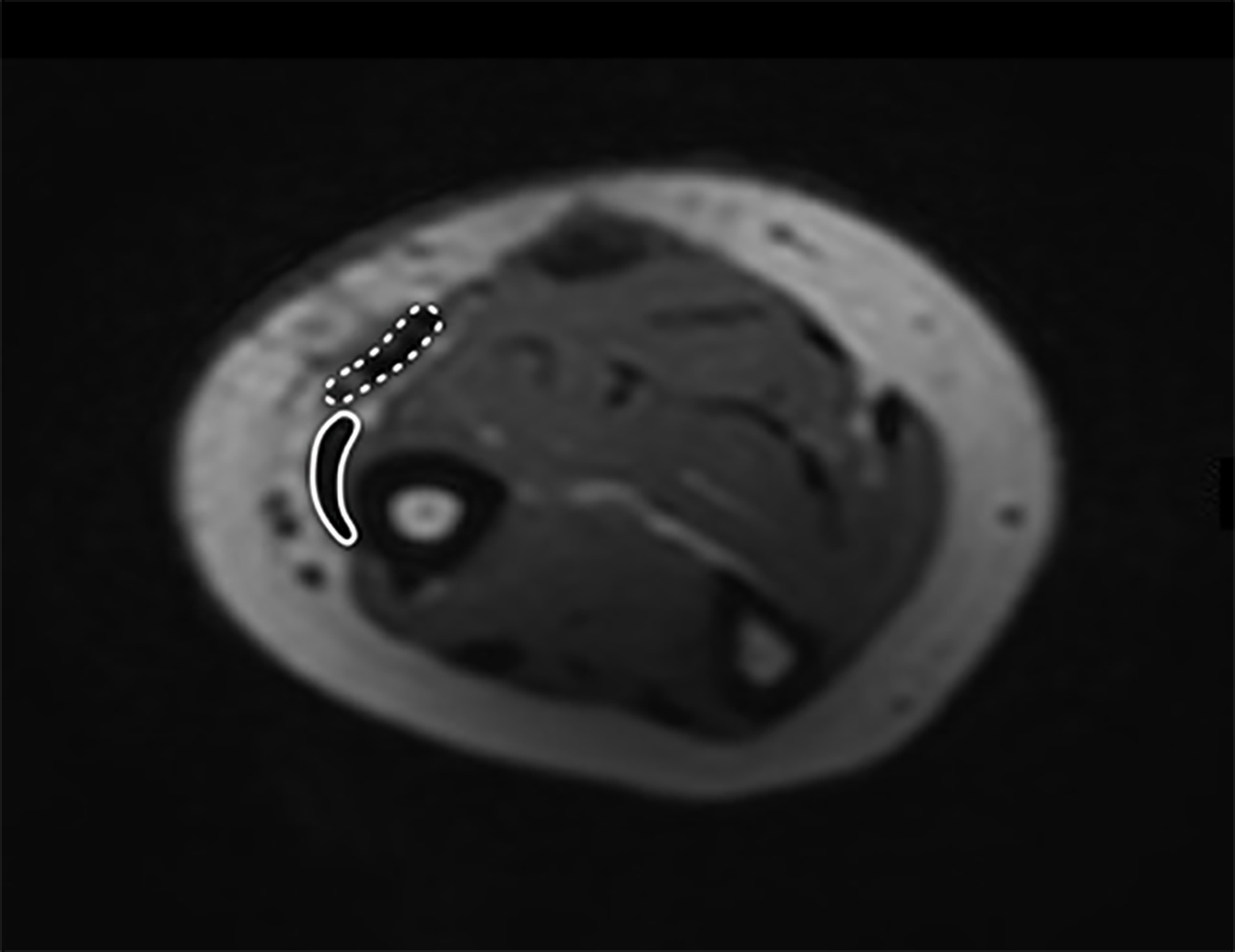 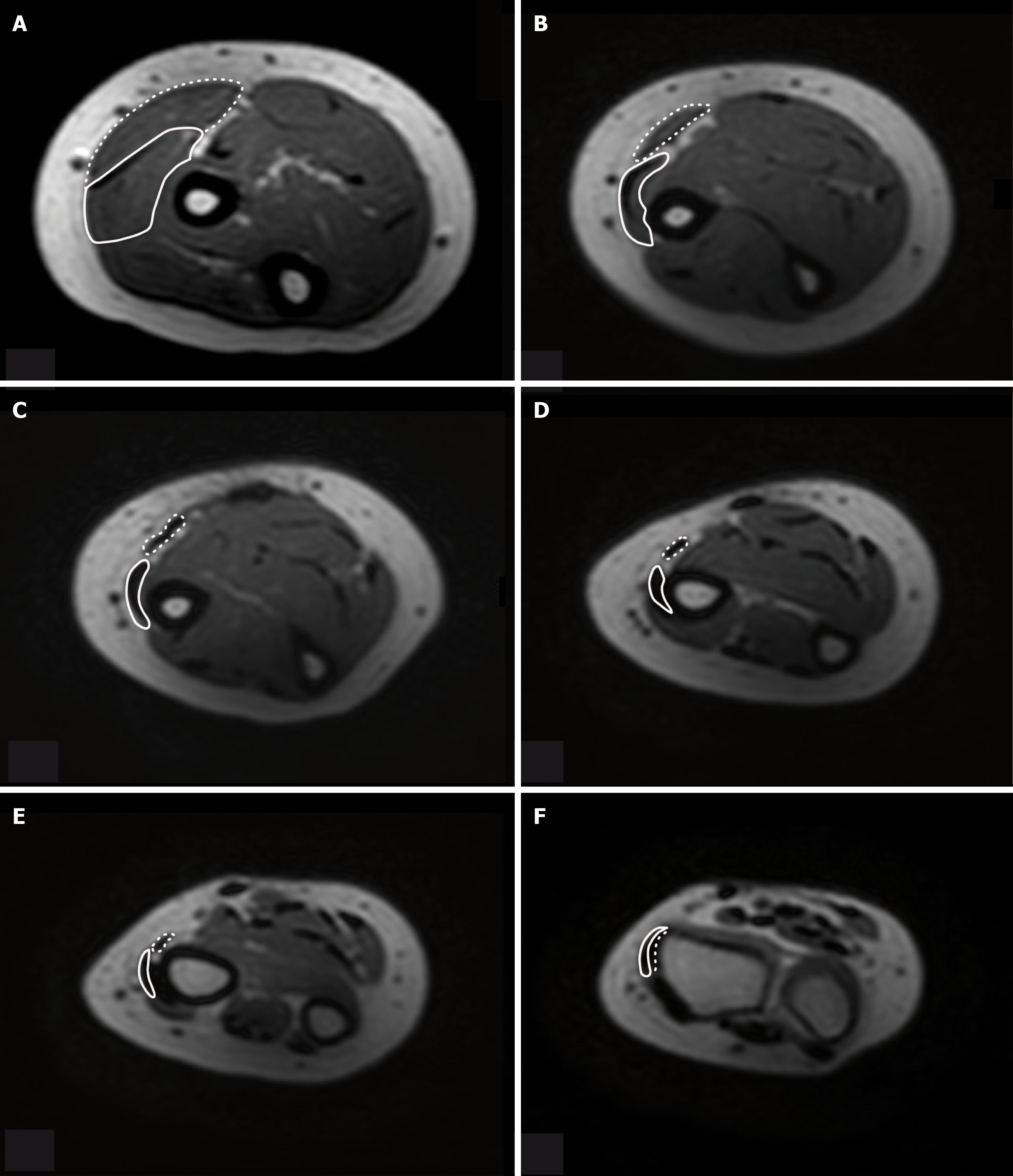 Brachioradialis muscle forms together with extensor carpi radialis brevis and longus muscles the so-called mobile wad of three. This group of muscles lies in the radial respectively lateral compartment of the forearm. Brachioradialis is the only muscle in the human body that has its origin on a distal end of one long bone and inserts on a distal end of another long bone. Its origin is on the distal two thirds of the lateral supracondylar ridge of the humerus and on the lateral brachial intermuscular septum. It inserts on the suprastyloid crest of a distal radius. It is innervated by a branch of radial nerve (C5-7) branching just proximal to the radial nerve division. The main function of the BR is to flex the elbow. The second function depends on a wrist position: BR is a pronator if the wrist is supinated and a supinator if the wrist is pronated[1,2].

Usually BR is a one-headed muscle that extends radial from the distal humerus to the distal radius. Due to its embryonal origin from the extensor mass there are several reported variations of the BR and its relationship with the local structures such as a publication showing a BR variation which origin extends throughout the whole lateral humeral ridge and intermuscular septum merging with the insertion of the deltoid muscle on a proximal humeral shaft[3]. A BR accessorius muscle in the lateral cubital region was observed in 5 of 176 (2.8%) limbs of dissected cadavers. Its origin was described to be proximal to BR origin reaching to the deltoid muscle. Its insertion was described to be on the tuberosity of the radius or just distal to it[4]. Various authors report about this variance under different names such as long supinateur accessoire (Lauth, 1930) or brachioradialis brevis seu minor (Gruber, 1868; Rolleston, 1887).

A double-bellied BR was observed in the distal third of a radius during dissection of a radial forearm free flap (RFFF) in an ORL tumor patient[5].

Another two-bellied BR was found in a male cadaver during a routine student dissection course, but this BR is different from ours, as it has a common insertional tendon[6].

An incidentally diagnosed BR with its insertion on metacarpal 3 after passing through the second extensor compartment was identified in another anatomic specimen[7].

Also SBRN showed inconstant characteristics of its course and branching pattern. The distances of its emerging point from underneath the forearm fascia to become subcutaneous and of its bifurcation were inconstant. The nerve’s division showed in 91.7% two branches and in 8.3% three branches. In the same study there is as well evidence of distal anastomosis between SBRN and lateral antebrachial cutaneous nerve (LABCN) in 10 of 48 investigated specimens (20.8%). In contrast other studies report up to 70% of anastomosis between LABCN and SBRN resulting in atypical distribution of the local sensitive branches that makes it prone to iatrogenic injury[10].

Brachioradialis muscle exhibits some clinical relevance. Firstly its function in elbow motion can be affected when injured. Secondary BR tends to displace the distal radial fragment in distal radius fractures. BR tendon is described as donor in tendon transfers and reconstructive surgery.

Orthopaedic and trauma surgeons not knowing about supernumerary BR variance and dealing with forearm fractures through a volar Henry approach to the radius in patients with the here described variance could choose a false plane during surgery which could lead to iatrogenic injury. Furthermore in a patient like the one mentioned with a laceration of soft tissue and complete disruption of several tendons and retraction, the supernumerary BR tendon could be easily misjudged and sutured with a wrong tendon resulting in dysfunction of the forearm and hand.

A radial forearm free flap is commonly used[11]. An existing supernumerary BR without surgeon being aware of this variance could be confusing and misleading during the dissection and harvesting of the flap.

Furthermore there are some clinical features such as a condition called cheiralgia paresthetica better known as Wartenberg’s syndrome described in 1932[12]. In this entity the patients suffer pain and dysesthesia due to entrapment of the SBRN between the BR and ECRL tendons that sometimes requires surgical release.