Tibial shaft fractures are common injuries among the pediatric and adolescent population. Conservative treatment remains the preferred treatment. However, over the last two decades, there has been an increasing trend of operative fixation in pediatric tibia fractures, commonly with intramedullary nail fixation (IMN). Elastic stable intramedullary nails (ESIN) are heavily used especially in skeletally immature patients as they are physeal respecting and the technique for insertion is familiar. Alternatively, reamed locked intramedullary nails (RIMN) have gained traction in adolescents and skeletally immature pre-adolescents. When identifying publications germane to intramedullary fixation of pediatric tibia fractures, the majority investigated clinical and radiographic outcomes associated with ESIN. We were able to identify only one study specifically examining RIMN in this population, albeit other studies included patients treated with RIMN. In parallel, there has been considerable progress in the field of skeletal maturity estimation with criteria based on different anatomic regions. However, little data exists for trauma purposes as no gold standard system had been accepted and proven to be precise for determination of potential growth remaining around the knee or for quantifying the risk of damage to the proximal tibial physis. Systems devised have been either unvalidated or unnecessarily complex or both. In order to achieve more informed treatment choices and optimal patient outcomes when using IMN fixation in pediatrics, simple to use, validated plain film-based methodology is needed to define skeletal maturity for the proximal tibia. Additionally, further examination of outcomes and the role of RIMN in this population are warranted.

Core tip: Little data exists to support the use of reamed intramedullary nails (RIMN) in adolescents and skeletally immature pre-adolescents. However, RIMN is used as the cornerstone of fixation for skeletally mature patients and older skeletally immature patients. Although we are not aware of any papers or case reports of RIMN use which resulted in growth arrest or recurvatum deformity in the pediatric population, surgeons are reluctant to use this nail design in younger patients. Clinical data regarding RIMN and a reliable and easy to apply skeletal maturity measure for the proximal tibia are needed for better decision making in such cases.

Tibial shaft fractures are the third most common pediatric fracture[1,2]. They represent the second most common reason for orthopedic inpatient admission to children’s hospitals[3-6].

Conservative treatment with closed reduction and cast immobilization remains the treatment modality of choice in children and adolescents with tibial shaft fractures[2,7-14]. In cases were the fracture pattern is assumed to be length unstable, open, or with soft tissue not amenable to casting, operative fixation may be chosen as the preferred treatment strategy[6,15].

Over the last two decades, there has been an increasing trend toward operative fixation in pediatric tibia fractures. Currently, tibia fractures account for 12% of all surgically managed pediatric fractures[1,2]. An intramedullary strategy is a commonly employed technique for tibial fracture fixation in children as it confers a bridge fixation with a long working length and encourages callus formation[4,5,9]. In the early 1980s, Ligier et al[16] reported that of placement of two curved rods in a straight bone would produce forces which opposed one another and obtain and maintain reduction of that bone. Their work in Nancy region of France and their publications[17,18] had popularized the usage of their elastic nails “Nancy nails” all around the world. Even today, elastic nails are an attractive option as they avoid physeal violation and offer a familiar technique to pediatric orthopedists that can be performed quickly and safely[2,4,6,11,19]. However, elastic stable intramedullary nails (ESIN) are theorized to provide a non-optimal solution for length unstable fracture patterns[19]. Additionally, as children become larger and more “adult-like” elastic nails may provide less reliable results. The transition in the age where this occurs is currently unclear. As such, many clinicians transition to more adult style fixation as the child ages, and tibia fractures are no different.

A rigid, locked nail (Figure 1) also termed reamed intramedullary nail (RIMN) confers rotational stability and adds the ability to treat more proximal and distal fractures via the usage of blocking screws and other advanced nailing strategies (Figure 2). Additionally, weight bearing may be allowed sooner than with ESIN, and hardware may need to be removed less often[5,6,9,11,19-22]. The insertion technique of RIMN however, adds risk for growth arrest at the proximal tibial physis and thus theoretically the risk of late recurvatum deformity in the sagittal plane[2,9,15,19,22]. 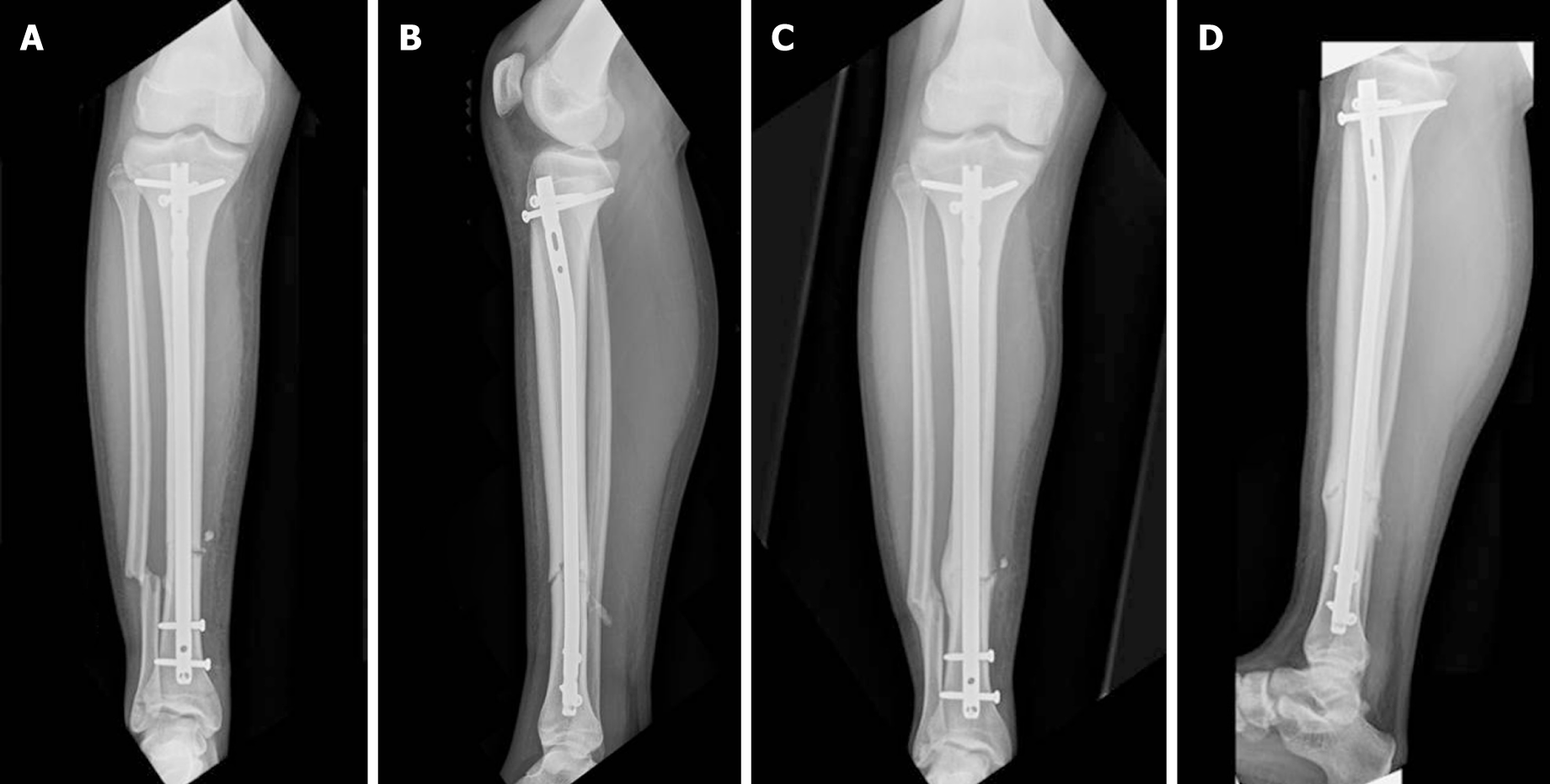 Figure 2 The usage of blocking screws and other advanced nailing strategies. A and B: Proximal tibia views; C and D: Distal tibia views.

Many studies have already evaluated the indications, techniques, and outcomes regarding the usage of elastic nails to treat these fractures. Perhaps surprisingly, a single study was identified examining the results of RIMN in pediatric patients. This study from the United Kingdom included 53 patients aged 13-16 years, treated with RIMN for tibial shaft fractures. Among these patients, thirty-six of these adolescent patients had open tibial physes at the time of intramedullary nailing. All 36 patients were re-imaged between 2 and 12 years after treatment to examine the effect of intramedullary nailing on tibial growth. The researchers reported excellent results with 100% union rates and no evidence of tibial shortening or partial growth arrest of the proximal tibial physis[23]. Although a low level of evidence, the study is at least suggestive that this approach is safe at short term follow up. The treatment of choice for the intramedullary strategy in many children, particularly in patients in the midst of the adolescent growth phase remains unclear. This lone article suggests that no appreciable growth arrest will occur, but we currently cannot say with confidence that there is no risk. Additionally, no reliable method exists to estimate skeletal maturity based on a tibia film, which renders retrospective study of this question difficult if not impossible.

There has been considerable progress in the field of skeletal maturity, and many methods exist to estimate growth remaining. Sanders published many studies on the subject, particularly as it relates to the estimation of scoliosis progression as it relates to growth centers in the shoulder and hand[24,25]. Similar data are not available in an accessible form for the knee to assess growth or growth arrest. Systems for estimating growth around the knee are either MRI based[26], non-validated, or too complex to be accessible to the average orthopedist[27,28]. As such, no gold standard system had been adopted to be precise for determination of potential growth remaining around the knee or for quantifying the risk of damaging the proximal physis. Currently orthopedists may use the fluoroscopy found in the OR to screen their patient’s hand for a gross assessment of general skeletal maturity. However even with this screening tool, no clinical data exists to guide the decision of “when is too young” to perform RIMN.

It is in our belief that the use of plain-film X-ray specifically around the knee joint, with new and improved skeletal maturity prediction methods (most probably based on the proximal tibia changes during maturation), would result in a more accurate estimation of skeletal maturity in this area. This in turn, could lead to a better understanding of the potential for harm in violation of the proximal tibial physis, at various stages of development. Creating such classification may also allow a common language when studying the question or consulting a colleague in a clinical scenario. Using this method, tibias treated with RIMN could be assessed retrospectively and assessed for growth arrest by the age estimated by the X-ray. In this fashion, a clearer picture could be obtained regarding which nail design to employ at a given development level of the child. The evidence-based clarifications and comparison between the type of nails would help us view the broader picture of using IMN fixation in pediatrics and will allow better treatment choices and more optimal patient outcomes.