To describe the incidence and surgical management of patients with syndactyly using an America's population-based database.

We conducted a retrospective study using the New York State Statewide Planning and Research Cooperative System. All patients with a diagnosis of syndactyly at birth were identified and followed longitudinally to determine yearly incidence as well as demographic and surgical factors. Descriptive statistics and univariate analyses were used.

Syndactyly occurs in approximately 7 per 10000 live births, and the majority of patients undergo surgical correction before age two. There may be several barriers to care including the availability of specialized hand surgeons, access to teaching hospitals, and insurance status.

Core tip: There is paucity of literature focusing on the incidence and surgical management of syndactyly. In our study, we found the incidence of syndactyly to be 7 cases per 10000 live births in New York State, and the majority of patients underwent surgical correction before age two. Most patients did not receive surgical care in New York State, indicating there may be barriers to care such as the availability of specialized hand surgeons, access to teaching hospitals, and insurance status. Additional study is needed to better understand outcomes after surgical management of syndactyly.

Syndactyly is a congenital anomaly characterized by an abnormal connection between adjacent digits[1]. Syndactyly is considered to be one of the most common hand malformations[2]; however, there is limited epidemiologic data in the literature[3]. The incidence of syndactyly is most commonly reported to be as low as 2 per 10000 live births, but it has also been reported to be as high as 1 per 2000 to 3000 live births[4-9]. However, the majority of these studies have been hospital-based or extrapolated from clinic visits[10]. A study using Swedish national registries found the incidence of differentiation anomalies to be 10.5 per 1000010, and a study from Western Australia reported the incidence of all upper extremity anomalies to be 1 in 506 with failure of differentiation being the most common anomaly[11]. However, syndactyly was not specifically identified as a subgroup in either study. A recent study found the prevalence of syndactyly to be 1.3 per 10000 in New York State; however, this study focused on disease prevalence and used a congenital malformations registry that is susceptible to underreporting[12].

Surgical management for syndactyly may be performed as early as 6 mo of age, but it is frequently performed between 12 to 18 mo of age[13]. Surgery is not recommended in children under the age of 6 mo due to the inherent anesthetic risk, but it should not be performed too late due to the potential risk of abnormal development of cerebral cortex patterns and the effect on adjacent digits[2,13,14]. While acceptable results have been reported with delaying surgery until age 4 or 5[13], surgical management is typically recommended between 2 and 3 years of age for optimal outcomes[2]. Outcomes are satisfactory in the majority of cases[15,16]. However, an increase in complications and re-operation rates has been previously associated with age, other ipsilateral hand anomalies, and split-thickness skin grafting[2,4,15]. Given the importance of timely surgical management, issues relating to access of care such as insurance status, geographic factors, and availability of specialized hand surgeons may influence patient outcomes, but these factors have not been previously studied. Several barriers to care for congenital conditions have been described in other specialties including patient education level, accessibility, and socioeconomic factors[17]. In addition, insurance status and distance to care are known to be important barriers to care in pediatric surgical care[18-20].

As a whole, there is a paucity of epidemiologic studies using modern, population-based databases. Furthermore, it is not known when these children are undergoing operative management and whether social or demographic factors limit access to care. In this study, we use a state database to describe the incidence of syndactyly in the state of New York. We also describe the age at which children are undergoing surgery, and whether insurance status or access to care is associated with operative management. We hypothesize that the disease incidence will be low and the majority of children will have surgery before age two. In addition, we hypothesize that insurance status and access to care are potential barriers to care in patients with syndactyly.

Newborn admissions from 1997 to 2014 with an International Classification of Diseases, Ninth Revision, Clinical Modification (ICD-9-CM) diagnosis code for syndactyly (755.1X) were identified. We included patients with simple and complicated syndactyly, and excluded patients with unknown sex or non-NY residence. Data regarding patient sex and insurance status were obtained from the newborn admission record. Annual incidence for the overall study period and each year individually was calculated by dividing the number of newborns with syndactyly by the total number of live births in New York State each year. Annual live birth counts for 1997 to 2014 were obtained from the New York State Department of Health Vital Statistics website.

Current pocedural terminology (CPT) codes (26560, 26561, 26562, 28280, 28345) and ICD-9-CM procedure codes (86.85) were used to determine whether the identified newborns had a subsequent syndactyly-related procedure. Variables obtained from the surgery visit were age at time of surgery, additional procedures performed, surgeon license number, and hospital identifier. We used CPT codes (14301, 15120, 15200, 15240, 15241, 15760) and ICD-9-CM procedure codes (86.61, 86.62, 86.63, 86.69, 86.70, 86.72, 86.73, 86.89) to determine whether patients having syndactyly surgery had concomitant skin grafting procedures. In addition, surgeon license number was used to obtain surgeon specialty information by querying state and public databases or the professional and personal websites for the surgeon. Hospital identifier was used to obtain information on residency accreditation for the institution from the American Hospital Association Annual Survey database. Hospitals with residency accreditation were classified as teaching hospitals. 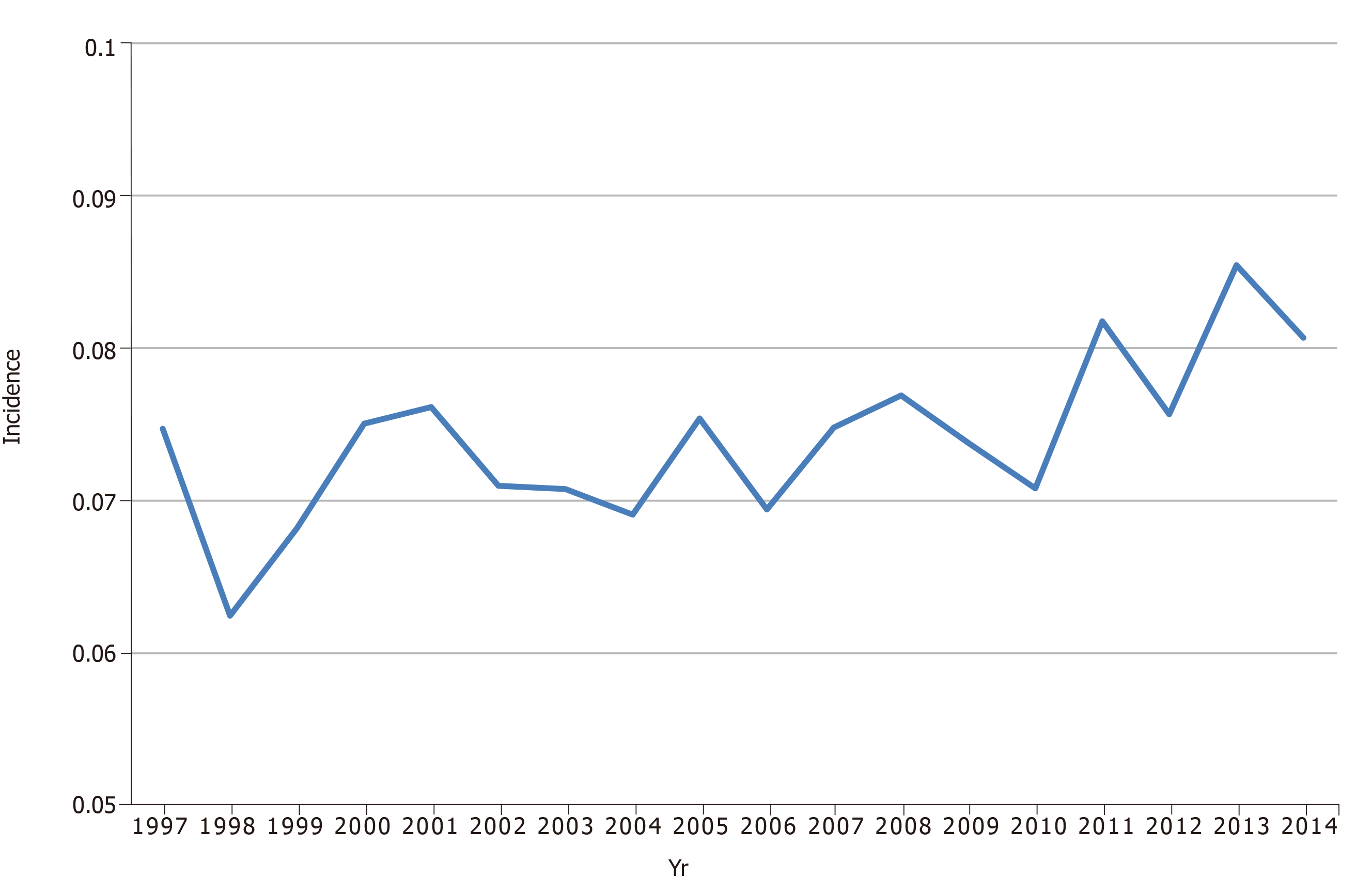 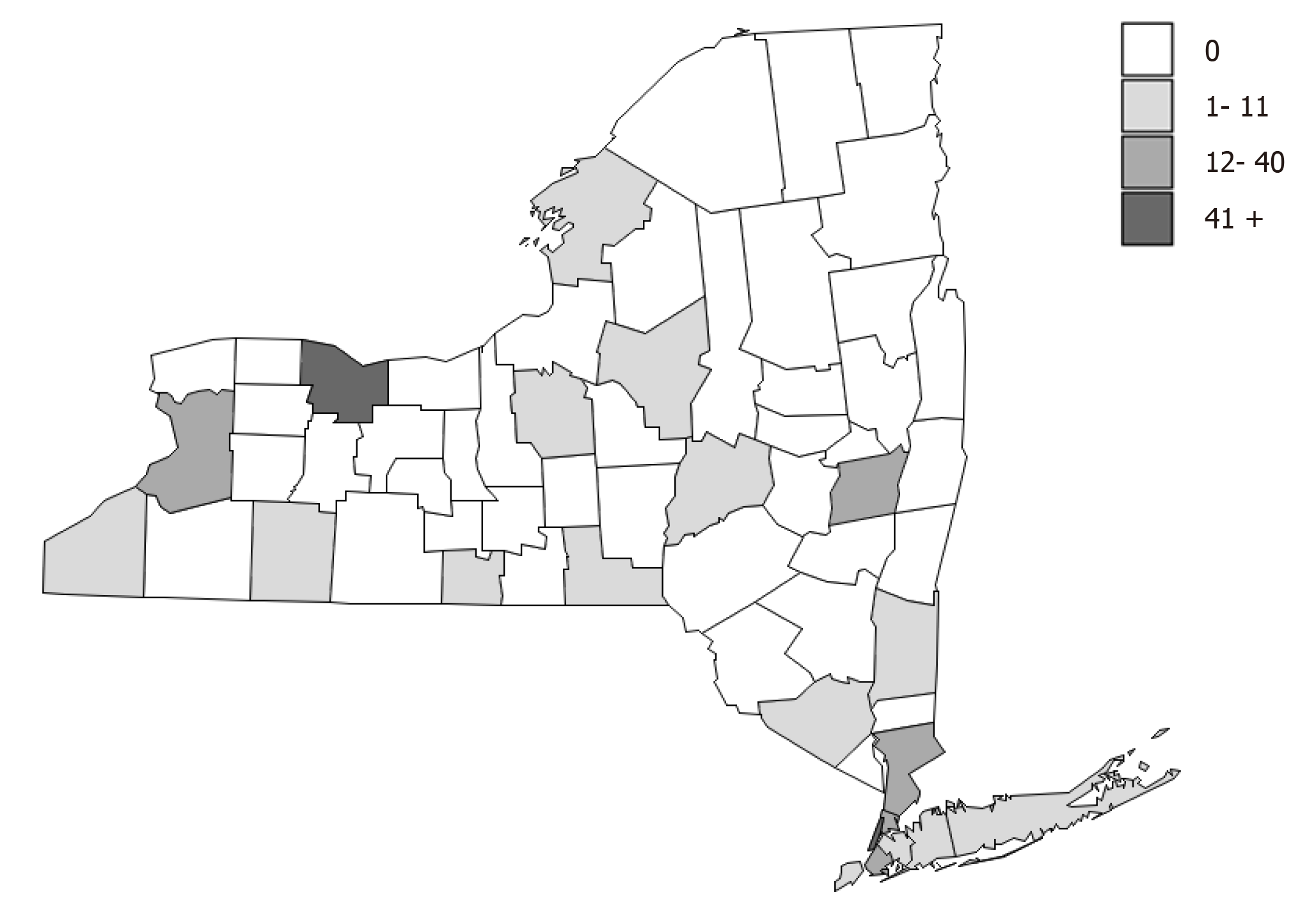 Only 5.4% of patients had syndactyly surgery in New York State. Among the surgical patients, most of the operations were performed before the age of two, and a minority of patients needed skin grafting. While surgical release is the recommended treatment for syndactyly and re-operation rates are well-published[21-24], there is limited data on the rates of surgery. Due to the paucity of studies on rates of surgery, we are unable to compare our surgical rates to other populations.

The vast majority of patients with a diagnosis of syndactyly in New York State did not have surgery in the state. This finding suggests that patients are either not undergoing surgical repair or, more likely, they are traveling out of state for care. There are several factors that may affect access to care, including the availability of specialized hand surgeons; proximity to urban medical centers and teaching hospitals; as well as socioeconomic factors and insurance coverage. More specifically, the majority of syndactyly surgeries in New York State are performed by plastic surgeons in urban, teaching hospitals.

Furthermore, payer data shows that patients having surgery in New York State were more likely to have Medicaid insurance compared to patients not having surgery. One possible reason for this might be that patients with private insurance and possibly higher socioeconomic status may be leaving the state to receive care at specialized centers. This finding underscores the need for greater availability of surgical care for the treatment of congenital hand differences in New York State.

This study has several strengths. Firstly, it is a large study that includes all patients in New York State with a diagnosis of syndactyly at birth. This data provides an epidemiologic assessment of incidence and surgical management, and to our knowledge, this is the first study focusing specifically on the incidence of syndactyly in an American population. Recently, Goldfarb et al[12] reported the prevalence of congenital hand anomalies using the New York Congenital Malformations Registry, however, their study focused solely on disease prevalence; used a database that does not require confirmation of diagnosis; and they specifically note the potential for underreporting of syndactyly in their database. Furthermore, we are able to describe the surgical management for patients with syndactyly in our study, as well as explore factors that may affect management. Several of these factors have not been previously investigated, and our findings can be used to generate additional studies focusing on surgical management and access to care.

However, this study has several weaknesses as well. First of all, our study is limited by the limitations of any study utilizing an administrative database. For example, our results are susceptible to errors in reporting and coding, and the available data is less granular in nature and limited to care provided in New York State. Similarly, we used syndactyly-specific CPT codes and ICD-9-CM procedure codes to identify surgical treatment, and it is possible that we did not capture all procedures for syndactyly if they were performed in conjunction with other procedures or having more procedures than are retained in the record. In addition, we do not have access to any clinical or patient-reported outcome measures to determine outcomes after surgery. However, several previous studies have investigated re-operation rates and complications associated with surgical management[22-24]. Lastly, these results are specific to patients residing in New York State and it is unclear whether these results are generalizable to other populations. However, our study provides useful information on the cohort of patients with syndactyly that were managed with surgery in New York State.

There is paucity of literature focusing on the incidence and surgical management of syndactyly. In addition, very few epidemiologic studies have used modern, statewide databases to understand the incidence of disease in the United States.

We conducted a retrospective study using the New York State Statewide Planning and Research Cooperative System database. We identified newborn records with a diagnosis of syndactyly to determine annual incidence, and searched subsequent records to determine rates of surgical management. Descriptive statistics and univariate analyses were performed on demographic and surgical information contained in the database.

Syndactyly occurs in approximately 7 per 10000 live births, and the majority of patients undergoing surgical correction are treated before age two. There may be several barriers to care including the availability of specialized hand surgeons, access to teaching hospitals, and insurance status.

Additional research is needed to determine the incidence of syndactyly in other populations, understand the low rates of surgical management in New York State, and describe the outcomes of surgery in this population. Statewide databases are well-suited for these types of studies.