The gastrointestinal tract is frequently challenged by pathogens/antigens contained in food and water and the intestinal epithelium must be capable of rapid regeneration in the event of tissue damage. Disruption of the intestinal barrier leads to a number of immune-mediated diseases, including inflammatory bowel disease, food allergy, and celiac disease. The intestinal mucosa is composed of different types of epithelial cells in specific barrier functions. Epithelial cells control surface-associated bacterial populations without disrupting the intestinal microflora that is crucial for host health. They are also capable of modulating mucosal immune system, and are thus essential in maintaining homeostasis in the gut. Thus, the regulation of intestinal epithelial homeostasis is crucial for the maintenance of the structure of the mucosa and the defensive barrier functions. Recent studies have demonstrated that multiple molecular pathways are involved in the regulation of intestinal epithelial cell polarity. These include the Wnt, Notch, Hippo, transforming growth factor-β (TGF-β)/bone morphogenetic protein (BMP) and Hedgehog pathways, most of which were identified in lower organisms where they play important roles during embryogenesis. These pathways are also used in adult organisms to regulate multiple self-renewing organs. Understanding the interactions between these molecular mechanisms and intestinal barrier function will therefore provide important insight into the pathogenesis of intestinal-based immune-mediated diseases.

Core tip: The pathogenesis of gastrointestinal diseases is associated with important molecular pathways such as Wnt, Notch, Hippo, transforming growth factor-β/bone morphogenetic protein or Hedgehog in controlling cell-fate determination. Here, we discuss how they contribute to homeostasis of intestinal epithelium.

The intestinal epithelium is a single-cell layer that serves as a protective barrier against the external environment. It supports nutrients and water transport, while maintaining a defense against intraluminal toxins, bacteria, and antigens. The epithelial barrier is governed by the expression of adherens junctions (AJs) and tight junctions (TJs), including cadherins, claudins, occludin, and junctional adhesion molecules (JAM) proteins, which seal adjacent cells together[1]. Expression of AJ and TJ proteins is regulated by phosphorylation and it can either promote or destabilize TJ formation[2]. The AJ and TJ complexes also play a crucial role in the regulation of cellular polarization, proliferation, and differentiation[3].

The intestinal epithelium is populated by distinct types of cells derived from stem cells, such as the absorptive cells (enterocytes) and the secretory cells (mucus-secreting goblet cells, hormone-secreting enteroendocrine cells, Tuft cells, and antimicrobial peptides-secreting Paneth cells). All but the Paneth cells differentiate into mature forms from the crypts to replace cells extruded from the tips of the villi[4,5]. This continuous replenishment of intestinal epithelium takes generally 4-7 d and it is important for the maintenance of epithelial integrity. Several conserved signaling cascades, i.e., the Wnt, transforming growth factor-β (TGF-β)/bone morphogenetic protein (BMP), Notch, Hippo, and Hedgehog pathway are associated with the maintenance of the morphological and functional features of diverse epithelial cell types (Figure 1). 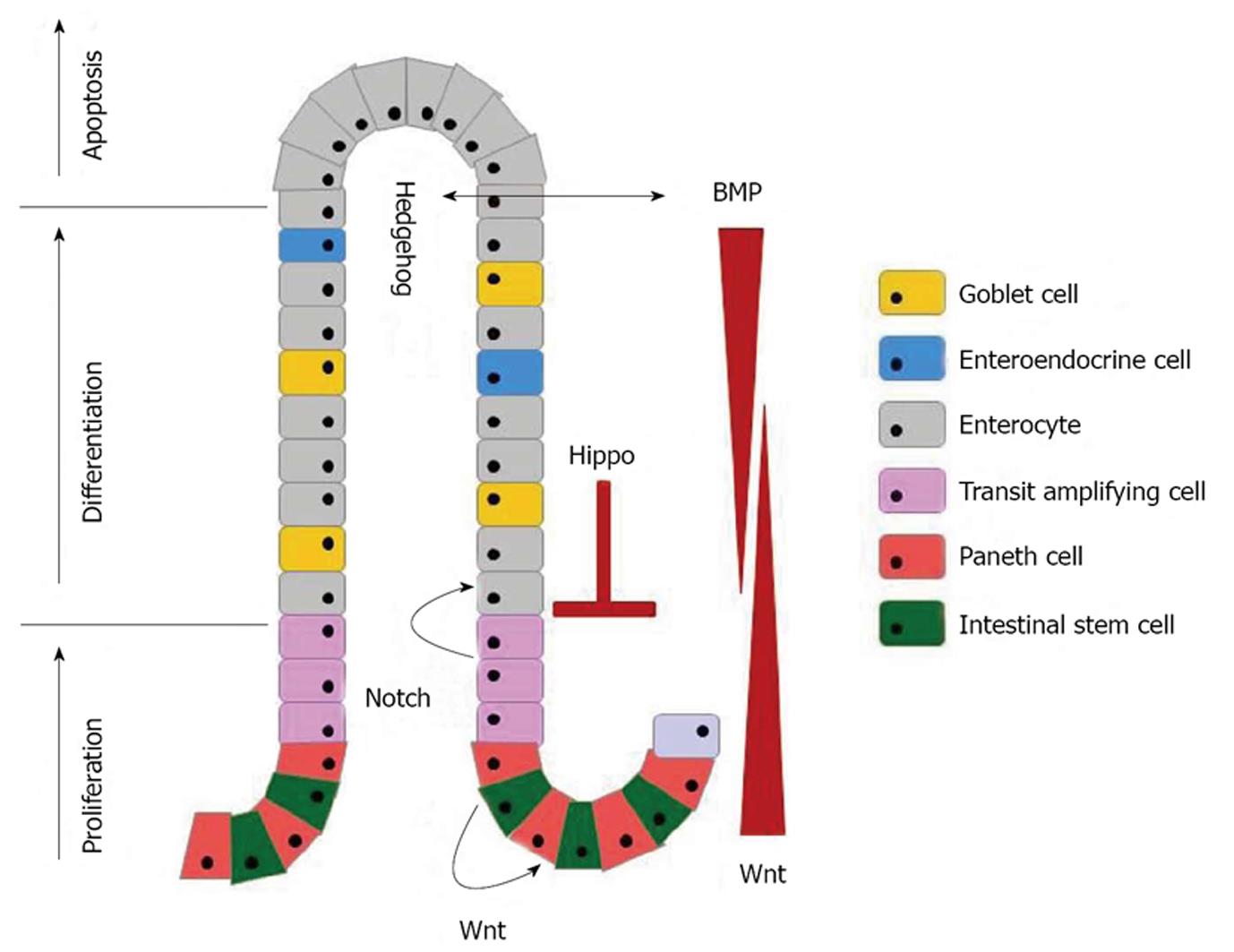 Wnt signaling plays multiple roles during intestinal homeostasis. It contains the canonical and non-canonical pathway. The central player in the canonical Wnt signaling cascade is β-catenin, a cytoplasmic protein the stability of which is regulated by the APC tumor suppressor. Complexes of frizzled seven transmembrane molecules and low-density lipoprotein receptor related proteins (LRP-5/-6) serve as receptors for secreted Wnts[12]. When Wnt receptor complexes are not engaged, caseine kinase-1 and GSK3-β, both residing in the APC complex, sequentially phosphorylate β-catenin at a series of highly conserved Ser/Thr residues near its N-terminus and are thereby tagged for ubiquitination and proteasomal degradation. In contrast, Wnt stimulation blocks the intrinsic kinase activity of the APC complex, leading to β-catenin accumulation. Unphosphorylated β-catenin translocates into the nucleus where it engages transcription factors of the TCF/LEF family, thereby translating the Wnt signal into the transcription of a TCF target gene[13].

The canonical Wnt pathway is essential for epithelial proliferation and crypt maintenance[14,15]. Mutations in the APC gene, a negative regulator of Wnt signaling, also results in hyperproliferation of the epithelium followed by the development of adenomas[16]. Moreover, β-catenin plays a role as an AJ component, thereby linking it to the cytoskeleton of epithelial cells. Wnt signaling is necessary for positioning and maturation of Paneth cells in the crypts, and for separating proliferating and differentiated cells. These processes are controlled by the Wnt-dependent expression of specific ephrin receptors in the intestine[17]. Non-canonical (β-catenin independent) Wnt signaling is termed the planar cell polarity pathway, which is activated by the GTPases Rho and Rac. These induce cytoskeletal rearrangements and help to form new crypts[18].

Notch signaling is active in intestinal crypt compartments and assists the Wnt pathway in promoting stem cell proliferation and negatively regulates differentiation into the secretory lineages[19]. Interaction of the Notch receptor (NOTCH 1-4) and ligand (Delta-like 1, 3, and 4; Jagged 1 and 2) between two adjacent cells results in proteolytic cleavages of the receptor by the γ-secretase enzyme complex, leading to the translocation of the Notch intracellular domain (NICD) into the nucleus. There, NICD binds to the transcription factor CSL (CBF1 in human, RBPjk in mice, Su (H) in Drosophila, Lag-1 in C. elegans) and activates target genes such as HES-1 (Hairy and enhancer of split 1), HES-3, and HES-5, which are important for the differentiation of absorptive cells. The transcription factor MATH-1 is a downstream target of HES-1 repression in the intestine and its activity leads to generation of the secretory cell lineages[20,21]. These results suggest that the absorptive versus secretory epithelial cell type fate decision is established through the HES/MATH1 axis. In addition, Gfi-1 and neurogenin-3 (Ngn-3), other transcription factors, compete for selection of enteroendocrine versus goblet or Paneth cell fates[22].

The dysregulation of Notch activity is related to the pathogenesis of IBDs, such as ulcerative colitis (UC) and Crohn’s disease (CD). A histological study in UC revealed that the depletion of goblet cells with loss of ATOH1 expression and CD is caused by dysregulation of secretory cell differentiation[23-25]. Additional evidence supporting such an important role for Notch in the intestine is derived from studies of γ-secretase inhibitors (GSIs). Treatment of mice with GSIs induced colitis due to inhibition of Notch signaling[26]. Notch activity may thus contribute to the regenerating epithelium and enhance the barrier function of the intestinal epithelium.

The Hippo pathway plays a crucial role in controlling organ size by inhibiting cell proliferation and apoptosis in response to cell-cell contact. This tumor suppressor pathway regulates intestinal regeneration and tumorigenesis[27,28]. When the Hippo pathway is active, the downstream effector of this pathway Yes-associated protein (YAP) is phosphorylated at S127 by the LAT1/2 kinases. Phosphorylated YAP remains in the cytoplasm and inhibits its proliferative and anti-apoptotic function in the nucleus, which is mediated by its binding to TEAD1-4 transcription factors. Cytoplasmic YAP has the Wnt antagonizing effects, thereby contributing to the prevention of proliferation and intestinal stem cell expansion[29]. In contrast, the deletion of Hippo pathway component Mst1/2 in mouse intestinal epithelial cells results in an expansion of undifferentiated stem cells and an absence of all secretory lineages[30].

In the small intestinal and the colonic epithelium of the normal mouse, YAP protein is found in the crypts and under normal conditions YAP makes no contribution to intestinal epithelial proliferation. However, it is required for tissue regeneration caused by injury. YAP protein is overexpressed in the crypts of the recovery phase from the DSS-treated mice[31]. Treatment of GSIs suppressed the intestinal dysplasia caused by YAP and this result suggests that YAP stimulates Notch signaling. YAP is commonly overexpressed in colorectal cancers[32]. Therefore, the activation of YAP for regulating intestinal stem cells regeneration indicates that a deficiency of Hippo signaling may contribute to tumorigenesis in the intestine.

The Hedgehog signaling is initiated through the binding of Hedgehog ligands to the patched homolog 1 (Ptch1) receptor. In the absence of ligands, Ptch1 inhibits the activity of smoothened (Smo). Hedgehog binding inactivates Ptch1 and in contrast, Smo inhibition is released and these mechanisms lead to the translocation of members of the GLI family (GLI-1, GLI-2, and GLI-3 in mammals) of Zn-finger transcription factors from the cytoplasm to the nucleus. Upon nuclear translocation, they activate the transcription of target genes, such as Ptch1, Gli-1, Bmp4, Hhip1[33]. Three Hedgehog homologs, such as sonic hedgehog (Shh), indian hedgehog (Ihh), and desert hedgehog (Dhh) are known to be highly conserved in mammals and of these, only Shh and Ihh are expressed in epithelium during development, but are redistributed after villus formation to be localized to the intervillus region[34]. Thus, Hedgehog signaling is required for the formation of villi. Shh has been localized to the region of the crypts and Shh plays a role in the regulation of epithelial proliferation[35]. Furthermore, Hedgehog ligands have been reported to be anti-inflammatory epithelial modulators in the intestine[36]. Hedgehog signaling pathway inhibitors induced hypoplasia of Paneth cells, thus this signaling pathway may influence intestinal epithelium repair partly through the regulation of Paneth cells[37]. Hedgehog signaling decreases during the injury phase and increases during the repair phase[38]. It confirms an important role of Hedgehog signaling in the repair of intestinal epithelium after injury.

TGF-β signaling regulates embryonic development, wound healing, proliferation, and cell differentiation[39,40]. The TGF-β family consists of cytokines including TGF-β isoform, BMPs, and activins. Signaling is induced by ligand binding to type II serine/threonine kinase receptors, which results in the phosphorylation of the type I receptor. Then, signaling of these activated receptors is transduced through three classes of SMAD proteins: receptor-regulated SMADs (R-SMADs: SMAD -1, -2, -3, -5, and -8), common SMAD (SMAD-4), and inhibitory SMADs (I-SMADs: SMAD-6 and -7). R-SMADs become phosphorylated by activated type I receptors and subsequent translocate to the nucleus. The SMAD complex interacts with transcription factors, thereby inducing target gene expression. TGF-β signaling components are expressed in the differentiated compartment of the intestine[41]. Inactivation of TGF-β signaling components has also been identified at the adenoma-to-carcinoma transition[42].

BMP signaling mediates the action of hedgehog, blocking the formation of ectopic crypts, and the expression of BMP antagonist noggin in the crypts prevents the activity of BMP, thereby enabling proliferation to continue[43]. TGF-β ligands signal through SMAD-2 and -3, whereas BMP signaling is mediated through SMAD-1, -5 and -8. Phosphorylated SMAD-1, -5, and -8 are observed in the villus epithelium and this modification prevents the villus epithelium from adopting a crypt-like proliferative character[44]. BMP signaling antagonizes the Wnt pathway within the differentiated compartment, thereby positioning transient amplifying cells in the crypts[45]. In addition, humans with germline mutations in SMAD-4 or BMP receptor type 1A (BMPR1A) are associated with up to 50% of JPS (Juvenile polyposis syndrome) cases[46,47].

Intestinal epithelial barrier dysfunction has been implicated as a critical role in the predisposition to a number of gastrointestinal diseases such as IBD, food allergy, and celiac disease. It could lead to defects in multiple aspects of microbial, epithelial, and immune interactions, and thus injury to the epithelial lining thought to be an important factor in the pathogenesis of intestinal-based immune-mediated diseases[48-50].

The homeostasis of the intestinal epithelium is maintained by a complex interplay of multiple regulatory mechanisms. Together, the Wnt, Hedgehog and TFG-β/BMP pathways maintain the crypt-villus architecture. The Wnt, Notch, and Hippo signaling pathways combine to control the cell fate choices from stem cells. Thus and understanding of critical signaling pathways for maintaining intestinal homeostasis is essential.

We would like to thank P Akens for her help in typing and proofreading the manuscript.