We conducted a retrospective study among 181 patients (143 men, mean age 71 years, range 50-94) referred to our centre for CTA EVAR planning or follow-up. HRCT and CTA were performed before or after 1 or 12 mo respectively to EVAR in all patients. All HRCT examinations were reviewed by two radiologists with 15 and 8 years’ experience in thoracic imaging. The results were compared with histology, bronchoscopy or follow-up HRCT in 12, 8 and 82 nodules respectively.

There were a total of 102 suspected nodules in 92 HRCT examinations, with a mean of 1.79 nodules per patient and an average diameter of 9.2 mm (range 4-56 mm). Eighty-nine out of 181 HRCTs resulted negative for the presence of suspected nodules with a mean smoking history of 10 pack-years (p-y, range 5-18 p-y). Eighty-two out of 102 (76.4%) of the nodules met criteria for computed tomography follow-up, to exclude the malignant evolution. Of the remaining 20 nodules, 10 out of 20 (50%) nodules, suspected for malignancy, underwent biopsy and then surgical intervention that confirmed the neoplastic nature: 4 (20%) adenocarcinomas, 4 (20%) squamous cell carcinomas, 1 (5%) small cell lung cancer and 1 (5%) breast cancer metastasis); 8 out of 20 (40%) underwent bronchoscopy (8 pneumonia) and 2 out of 20 (10%) underwent biopsy with the diagnosis of sarcoidosis.

Core tip: Nowadays the use of high resolution computed tomography in endovascular aortic aneurysm repair (EVAR) patients planning and follow up is not recommended yet. Our study demonstrates the possibility to early diagnose lung cancer during EVAR follow-up or planning in smoker patients, overcoming the concept of dose radiation induced neoplasms, especially in over 65 years old patients.

Vascular diseases cover an extended selection of pathologies comprising cardiovascular, thoracoabdominal, peripheral vascular and cerebrovascular disease[1]. Smoking is considered one of the main risk factors for the development of atherosclerosis and, in particular, oxidative stress and inflammation that constitute the physiological connection between smoking and vascular diseases. Polycyclic aromatic hydrocarbons (PAH) represent the main carcinogenic compound found in cigarettes, produced during the incomplete combustion of organic matter. Many articles demonstrate the double activity of PAH, both carcinogenic (lung and other tissues) and inflammatory, provoking endothelial dysfunction and several studies demonstrate that oxidants directly impair endothelial function, increasing nitric oxide scavenging by oxygen free radicals[2-6]. In the literature it is well known that cardiovascular diseases are often diagnosed on the basis of imaging findings, such as suspected atherosclerotic plaques of the chest in computed tomography (CT), also incidentally[7-9]. A similar approach should be used to identify extravascular findings, when the CT examination is required to explore vascular diseases. In particular, since cigarette smoking is the main risk factor for both vascular and neoplastic lung diseases, radiologists should examine the chest in evaluation of vascular patients with many risk factors suggesting possible synchronous pathologies. It has been reported that CTs requested for the exclusion of pulmonary embolism give a high yield of chest abnormalities, such as mediastinal adenopathy, paratracheal adenopathy, atelectasis, emphysema and pulmonary nodules or masses[10,11]. Although not the target of the investigation, lung abnormalities, especially lung cancer, could become the main finding with prognostic relevance in terms of life-long survivor risk in vascular patients. Furthermore, even if many articles over the last decade have reported the problem of unsuspected thoracic findings in CTs performed for suspected pulmonary embolism or thoracic aortic pathology, the possibility of finding chest pathology, and in particular lung cancer in smoker patients suffering from vascular disease, has been underestimated[12,13]. Moreover, several articles have reported a high cumulative radiation dose in patients treated with endovascular aneurysm repair (EVAR), both during the interventional procedure and CT follow-up, suggesting a possible role of radiation exposure in developing cancer in these patients[14-16]. On the contrary, there have been no articles to date about the discovery of lung cancer during EVAR planning or surveillance in smokers suggesting that smoking rather than the exposure of patients to radiation is the main risk factor for lung cancer. Considering the previous statements, the purpose of this study is to assess the prevalence of lung cancer in patients with a smoking attitude, who underwent computed tomography angiography (CTA) for planning or monitoring EVAR in our department.

Institutional review board approval was obtained for this retrospective study, as well as informed consent from all subjects. We reviewed the report results of 250 CTs of patients referred to our department for EVAR planning or follow-up between June 2014 and May 2016, searching for lung abnormalities in the patients who underwent high resolution computed tomography (HRCT) of the lung before contrast agent administration. Patients were identified throughout a digital radiological database (Picture Archive and Communication System, PACS) which registers all radiological studies performed by the Department of Radiology. The mean age of patients at the time of CT was 71 years, in a range from 50 to 94, and 38 (21%) were female. Sixty-nine (26.6%) patients were excluded for the following reasons: 30 (43.5%) because of the absence of synchronous chest HRCT, 21 (30.4%) because of lack of proven histological findings of lung cancer or HRCT follow-up examinations, and 18 (26.1%) because of non-smoking attitude. The CTA and HRCT were performed simultaneously in all selected cases to avoid interpretation bias. Seventy-four (40.8%) CTs were performed for EVAR planning and 107 for EVAR surveillance (67 at 1 mo and 40 at 12 mo after EVAR). All the selected patients had a documented history of smoking [number of pack-years (p-y)][17-19].

A total of 181 HRCTs were reviewed. The incidental lung findings reported on chest CT are shown in Table 5. There were a total of 102 (56%) nodules in 92 out of 181 (50.8%) HRCTs, with a mean of 1.79 nodules per patient and an average diameter of 9.2 mm, ranging from 4 to 56 mm. All the CT nodules characteristics are reported in Table 6. After radiologists’ review, 82 (76.4%) of the nodules met criteria for CT follow-up and were submitted to a second HRCT examination (performed between 6-12 mo), to exclude the possibility of malignant evolution. Of the remaining 20 nodules, 10 out of the 20 (50%) suspected for malignancy underwent biopsy and then surgical intervention which confirmed the following neoplastic nature: 4 (20%) adenocarcinomas (Figure 1), 4 (20%) squamous cell carcinomas, 1 (5%) small cell lung cancer and 1 (5%) breast cancer metastasis (Figure 2); 8 out of 20 (40%) underwent bronchoscopy (8 pneumonia) and 2 out of 20 (10%) underwent biopsy with the diagnosis of sarcoidosis. All the patients diagnosed with lung cancer (1 female and 8 males) had a smoking history with a mean quantity of 60 p-y (range 45-83 p-y). The remaining patients with non-neoplastic nodules had a smoking history with a mean quantity of 35 p-y (range 20-46 p-y) per patient. Eighty-nine out of 181 HRCTs resulted negative for the presence of suspected nodules with a mean smoking history of 10 p-y (range 5-18 p-y). 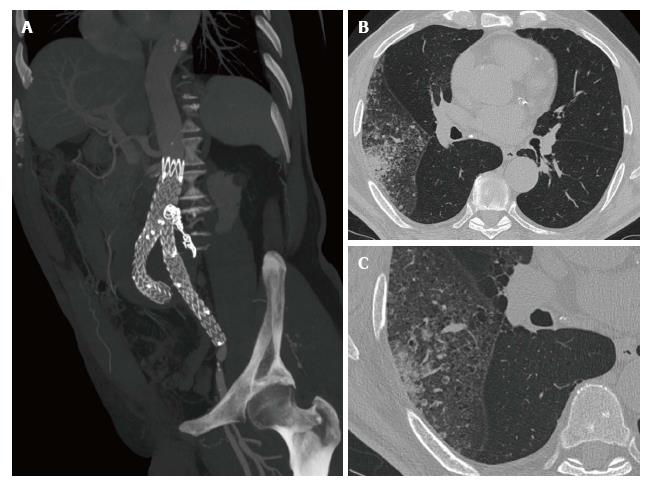 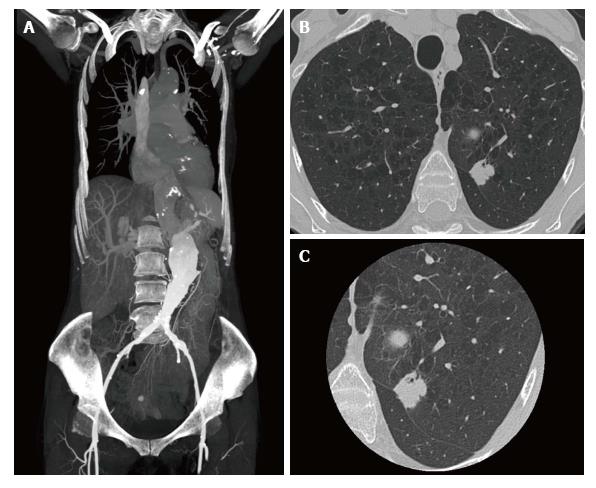 EVAR currently represents a safe and effective treatment for abdominal aortic aneurysms exclusion with an increase in the choice of this treatment over traditional open repair, especially in elderly patients[21,22]. In particular, EVAR is also becoming the method of choice for aneurysmal sac exclusion in vascular patients with difficult vascular anatomies due to its favourable outcomes, customised approach and easy technical execution[23-25]. Despite these advantages some articles debate the risk of long-term lifelong EVAR CT follow-up, with a remarkable amount of radiation exposure carrying the risk of developing cancers; moreover they report the need of dose optimisations using new targeted CT protocols, considering that the absorbed dose by the patient differs on the basis different scanners, patient body size and age[26-28]. However to our knowledge there are no articles discussing the prevalence of lung cancer, prior to EVAR treatment, in patients with a smoking attitude. Furthermore, lung cancer represents the most important cause of death in the world, and the majority of patients suffering from lung cancer present mild or no symptoms, with nodular lesions being the most common presentation of peripheral lung adenocarcinoma[12]. Moreover, a large number of patients with vascular disease have a smoking history and, in particular, smoking is one of the major risk factors for developing vascular diseases. At the same time, smoking also represents the main risk factor for lung cancer due to the activation of the same inflammatory pathway with continuous endothelial damage. In our study we assess the prevalence of lung nodules through HRCT in a cohort of smoker patients who underwent abdominal CTA for planning or follow-up EVAR; considering the mean advanced age of patients (71 years), stochastic radiation damage deriving from the extra dose of HRCT (respectively mean CTDI 12.6 mGy (range 9.4-15.2) for HRCT vs 22.3 mGy (19.8-24.3) for abdominal CTA) can be considered negligible, comparing to the benefit of early tumor detection; in fact 9 out of 102 nodules (8.8%) in 9 out of 181 (4.9%) patients were finally diagnosed as lung cancer with consequent surgery (6 patients), chemotherapeutic treatment (1 patient) or both (2 patients), with a free survivor rate of 100% at one years. All the other patients were correctly addressed to the appropriate treatment or follow-up. In this context, performing HRCT of the lung to optimise morphological evaluation of lung nodules and/or adding advanced imaging procedure such as CT perfusion or CT volumetric assessment of lung nodules during CTA for the evaluation of vascular aneurysm, offers radiologists the possibility of performing a differential diagnosis between benign or malignant nodules, choosing the correct management for each patient[29-33]. Moreover, CTA can be performed in the emergency setting to exclude or confirm the presence of aneurysmal sac or EVAR complications or to investigate an abdominal pain after a doubtful ultrasound examination; incidental findings can also occur in that setting[34-37].

In fact several articles in the literature have reported the possibility of discovering coexistent neoplasms such as gastrointestinal and gall bladder cancers during CT examination of vascular patients[38-40].

Our study had some limitations. First of all, it is a retrospective study with some possible bias in patient selection, although the database used to find the patients was complete in medical records. Secondly, not all the patients underwent a prior chest radiography that could exclude patients with negative reports from the study. Additionally, a prospective study is mandatory to test the real impact of incidental findings in smoker patients who underwent EVAR planning or follow-up, in order to support the introduction of HRCT of the lung in the CT protocol for smoker patients.

In conclusion, this study actually demonstrates the possibility of early diagnosis of lung cancers during CTA EVAR planning or follow-up, overcoming the concept of dose radiation induced neoplasms, especially in patients over the age of 65.

Nowadays the use of high resolution computed tomography (HRCT) in endovascular aortic aneurysm repair (EVAR) patients planning and follow up is not recommended yet but this study demonstrates the possibility to early diagnose lung cancers during EVAR planning or follow-up, overcoming the concept of dose radiation induced neoplasms, especially in over 65 years old patients.

To be known, this is the first study using HRCT for the evaluation of vascular patients during EVAR planning or follow-up.

HRCT could play a key role in the diagnosis of incidental lung findings during the evaluation of vascular patients (EVAR planning or follow-up) and surely in the management. In particular HRCT can discriminate patients with urgent lung surgical evaluation for the presence of malignancy, from patients in which a follow-up can be proposed, increasing lifelong patients expectancy.

HRCT (high resolution computed tomography of the lung) before contrast agent administration, can lead a better evaluation of lung abnormalities enhancing nodule morphology and shape; CTA allows a better evaluation of vascular lumen during surgical planning and a correct assessment in cases of EVAR follow-up complications.

The manuscript is well written.