Brachytherapy is a form of radiotherapy treatment technique that delivers a high dose of radiation inside or very close to the cancer tissues. The term brachytherapy was originally derived from the Greek words βραχύς (brachys) and θεραπεία (therapeía) which means “short” and “curing or healing” respectively. The history of brachytherapy dates back to the 1910s; soon after the discovery of radioactivity, Pierre Curie suggested the idea of using radioactive sources for brachytherapy, and it was first utilized in the treatment of lupus and gradually extended to other sites. Traditionally, brachytherapy involves the use of sealed radioactive sources. It is extensively used in the treatment of brain, eye, base of tongue, floor of mouth, tongue, oropharynx, lip, nasopharynx, trachea, esophagus, breast, cervix, endometrium, prostate, rectum, skin, sarcoma and many other treatment sites[1-6]. Brachytherapy can be used alone or in conjunction with conventional external beam radiotherapy.

The International Commission on Radiation Protection published a report in 2005 that reviewed all the radiotherapy accidents associated with high dose rate brachytherapy[9]. The report showed that radionuclide based brachytherapy resulted in 500 accidents including one death along the entire chain of procedures from radioactive source packaging to dose delivery. Some of the accidents were related to loss of sources, radiation leakage and inaccurate calibration of sources. Radiation accidents with radionuclide brachytherapy can also occur due to the use of the wrong isotope, leaking sources, and failure to remove temporary implants[10]. There are occasions when the source may not retract due to a power outage, a kink in the catheter or interlock failure. These conditions may lead to an excessive dose to the treating staff and unwanted doses to the patient while trying to retract the source. It is expected that the introduction of electronic brachytherapy would eliminate most of these accidents associated with radionuclide brachytherapy. Electronic brachytherapy systems do not emit radiation in the off state, which eliminates likely accidents with source packaging, transportation and mishandling of sources related to radionuclide brachytherapy. They can be operated in a standard treatment room with minimal shielding due to low energy and no radiation leakage in the off state. There is also no radioactive waste and hence no concerns with source transportation unlike radionuclides which require a special license for source transportation and radioactive waste disposal.

Currently, six different types of electronic brachytherapy systems (Figure 1) are available, which includes Intrabeam (Zeiss), Xoft (iCAD), Papillon (Ariane), Photoelectric Therapy (Xstrahl), Esteya (Elekta) and SRT 100 (Sensus Healthcare). Most of these systems operate between 50 and 100 kVp. Esteya delivers 69.5 kV X-ray beam at a dose rate of 2.7 Gy/min at 3 mm and is used to treat non-melanoma skin cancer, including basal cell carcinoma and squamous cell carcinoma[11]. Papillon from Ariane Medical Systems is used to treat breast, rectum, and skin cancers. This X-ray system operates at 30 and 50[12] kVp with a dose rate of > 8 Gy/min and > 20 Gy/min at 20 cm focus to surface distance. The SRT-100 system operates between 50 and 100 kVp and can be used to treat non-melanoma skin cancer including basal cell carcinoma skin and keloids[13]. Intrabeam and Xoft electronic brachytherapy have a wide variety of applicators to treat multiple sites[14-19]. The heart of the intrabeam system is an XS4 miniaturized linear accelerator with an inbuilt internal radiation monitor that monitors the dose delivered to the patients in real time. A mini accelerator section accelerates the electrons emitted by a cathode gun, and the existing electron beam is focussed onto a gold target to generate X-rays. The intrabeam system is employed in the treatment of breast, skin, GI and spinal metastases. This system uses X-rays produced by a gold target, and the Xoft Axxent uses a tungsten target to generate X-rays. The size of a conventional diagnostic/therapeutic X-ray tube typically varies between 30 and 50 cm along the long axis and 20 cm in diameter. As opposed to the standard X-ray tube, the Xoft Axxent brachytherapy X-ray tube is the only system currently available with a diameter of 2.25 mm with a full assembly diameter of 5.4 mm which incorporates an extra space outside the cathode-anode assembly of the X-ray tube for water circulation to extract the heat during X-ray emission. This system can be used to treat cancers of the skin, breast, and endometrium. When compared to other existing electronic brachytherapy systems, the Xoft source almost mimics a Ir-192 source in terms of dose rate. It is the only electronic brachytherapy system closer to a wired radionuclide source such as Ir-192/Co-60 currently available to treat cancer of the cervix. The nominal dose rate of the Axxent HDR X-ray source is 0.6 Gy/min at 3 cm in water. The maximum anode current, at 50 kVp is 300 μA. The Xoft Axxent brachytherapy is a comprehensive system with an inbuilt electrometer and a well-type chamber which enables Physicists to measure and verify the output just before treatment. 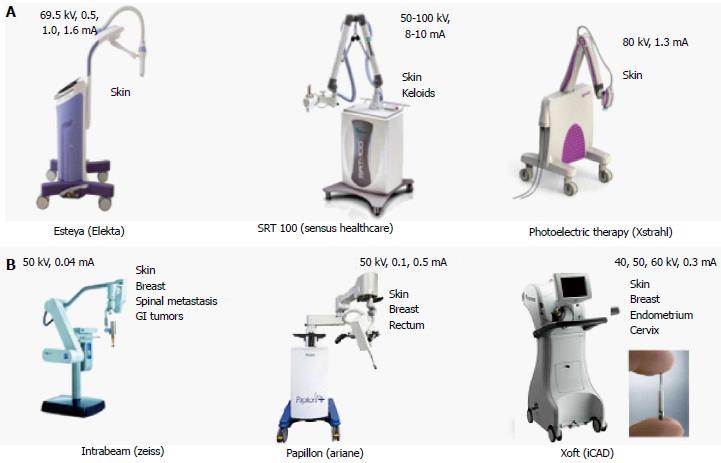 Figure 2 shows the energy spectra measured using an Amptek spectrometer placed close to a 3-4 cm spherical balloon applicator and it also indicates that the maximum energy of the Xoft X-ray source approaching 50 keV. The average energy of the Xoft Axxent X-ray source is between 26 and 35 keV which enables the systems to be used in a CT or diagnostic X-ray bunker for treatment. The dose fall-off with 50 kVp X-rays is quite rapid compared to the Ir-192 source which would help the treating physician to reduce the complications to adjacent normal tissues and may also contribute to dose escalation. Figure 3 shows that the Xoft Axxent X-ray source mimics the dose fall-off characteristics of low energy isotopes with an average energy lying between I-125 and Pd-103 radioactive sources and still maintains the high dose rate property of the Ir-192 source. Figure 4 compares the dose fall-off of the Xoft 50 kV source, 6 MV, 6 MV 60° wedge and 18 MV beams. The dose fall-off measurement was conducted for a bare Xoft X-ray source and the X-ray source placed inside a 3-4 cm balloon applicator in a Welhofer radiation field analyzer. It is evident from the figure that the dose fall-off with electronic brachytherapy is quite rapid compared to megavoltage beams. 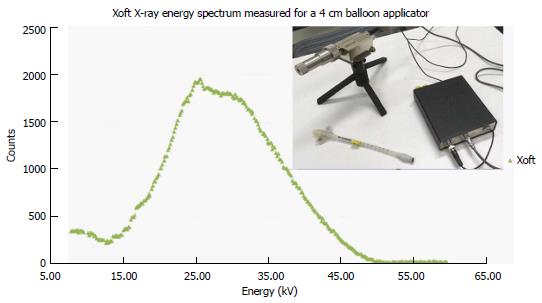 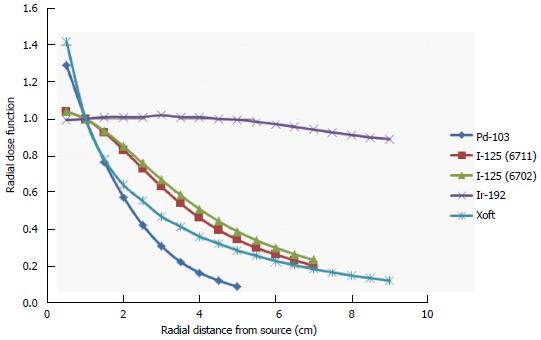 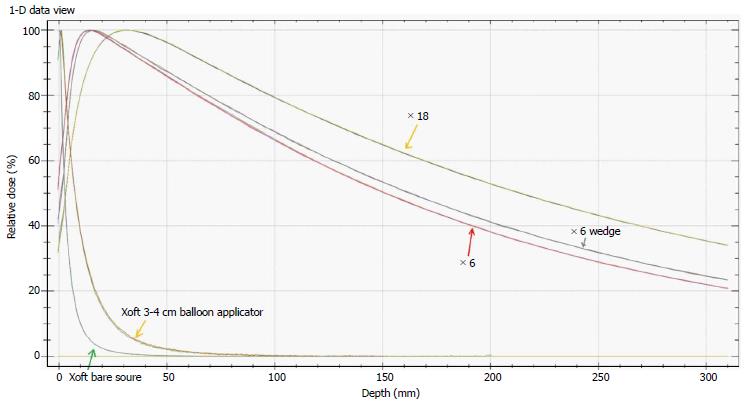 Electronic brachytherapy is currently used to treat cancers of breast, skin, keloids, spinal metastasis, GI, endometrium, cervix, and rectum. Some of the existing electronic brachytherapy systems such as Esteya and Photoelectric Therapy are limited to small skin cancers due to their specific design. The papillon+, intrabeam, Xoft and SRT-100 electronic brachytherapy systems are also used in the treatment of skin cancers. Most of these systems use a small flattening filter to flatten the beam for the treatment of skin cancers. Several studies have demonstrated that these systems result in lower toxicity and provides excellent cosmesis[18]. Intrabeam uses a special needle applicator with a diameter of 4.4 mm for the treatment of vertebral metastases. The papillon+, intrabeam, and xoft electronic brachytherapy systems produce an isotropic distribution which is highly desirable for breast intraoperative radiotherapy. The TARGIT trial is the largest IORT trial to date using electronic brachytherapy in conjunction with breast conservation surgery. This trial studied a total of 3451 patients wherein 1721 subjects were randomized to TARGIT and 1730 to external beam radiotherapy. The 5-year results of the local control and overall survival from the TARGIT-A randomized trial published in Lancet 2014 concluded that a risk-adapted approach should be considered for patients treated with electronic brachytherapy[20]. In 2010, the first multi-center study to evaluate the safety and device performance of Xoft Electonic Brachytherapy was published by Mehta et al[21]. This study enrolled a total of 65 patients between March 2007 and March 2008 and had completely resected invasive ductal carcinoma or ductal carcinoma insitu with N0, M0. The fractionated regimen of 34 Gy over 10 fractions prescribed 1 cm beyond the balloon surface show similar acute toxicities to other high dose rate approaches for accelerated partial breast irradiation.

According to the World Health Organization, cervical cancer is the second most common cancer in women worldwide and every year more than 270000 women die from cervical cancer[22]. Brachytherapy is one of the most common treatment modalities used in the treatment of cervical cancer. Traditionally, radionuclide-based brachytherapy has been administered alone or in combination with external beam radiotherapy for cervical cancer patients. The majority of the centers in developing countries have a remote afterloading treatment unit for delivering this modality. Most of the radiation accidents associated with these sorts of procedures could be eliminated with the use of electronic brachytherapy. The Xoft Axxent requires relatively fewer resources compared to the standard radionuclide based brachytherapy. Recent studies have shown that Ir-192, Co-60, and Xoft based cervical brachytherapy dosimetry are comparable and could result in reduced dose to the bladder and rectum[23]. Figure 5 shows a simulated intracavitary treatment plan planned using the Xoft X-ray source for a predefined dwell positions. The rapid dose fall-off of 50 kV compared to Ir-192 is one of the main reasons for this reduced dose to the bladder and rectum. Recently, Xoft introduced a Henschke type applicator that could enable the delivery of radiation to cervical cancers. The cervical Henschke type applicators are made of a titanium material with 0°, 15°, 30° and 45° tandem angles and 2.0, 2.5 and 3 cm ovoid diameters. The standard flexible source channel used for cancers other than cervical is 25 cm and exclusively for cervical brachytherapy the source channel is 50 cm (Figure 6). Xoft also provides a set of vaginal applicators for the treatment of endometrial cancers. The existing miniaturized X-ray tube has few limitations in its longevity and source size. With radionuclide-based brachytherapy, the specific activity of the source determines the size of the source. Radionuclide sources such as Iridium-192 have a high specific activity which enables the manufacturers to produce small sources with high activity. Due to this, conventional radionuclide-based brachytherapy has wider applications and can deliver interstitial brachytherapy to multiple treatment sites. Head and neck based interstitial brachytherapy such as the base of tongue and floor of mouth require a loop technique where the smaller size source would help to make the sharp bend. The diameter of the Axxent xoft brachytherapy source is 2.25 mm, and when housed inside a cooling tube it increases the effective source diameter to 5 mm. However, this limits its application to interstitial brachytherapy. With a rapid growth in the field of computer technology and biomedical engineering could one day lead to the design of a stable sub-millimetre X-ray tube. Such a miniaturized X-ray tube would enable the expansion of electronic brachytherapy to most sites currently treated by Ir-192 sources. 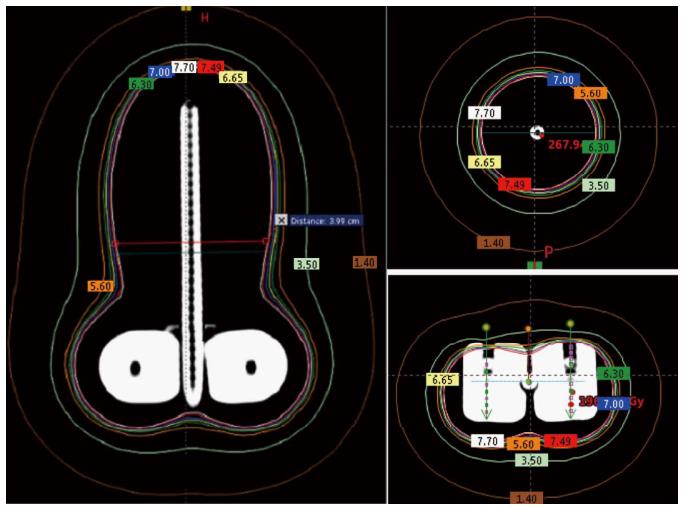 Figure 5 Simulation of a Tandem and Ovoid applicators planned in a Brachyvision software for a predefined Xoft X-ray source dwell positions. 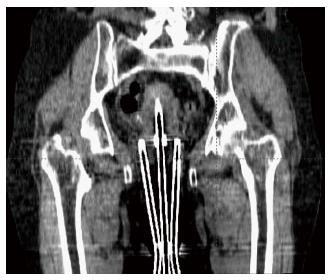