Hypoperfusion injury related to blood pressure decrease in acute hypertensive intracerebral hemorrhage continues to be a controversial topic. Aggressive treatment is provided with the intent to stop the ongoing bleeding. However, there may be additional factors, including autoregulation and increased intracranial pressure, that may limit this approach. We present here a case of acute hypertensive intracerebral hemorrhage, in which aggressive blood pressure management to levels within the normal range led to global cerebral ischemia within multiple border zones. Global cerebral ischemia may be of concern in the management of hypertensive hemorrhage in the presence of premorbid poorly controlled blood pressure and increased intracranial pressure.

Core tip: The current case report highlights the risk of aggressive management of acute hypertension in the setting of intracerebral hemorrhage causing global cerebral hypoperfusion, despite maintenance of cerebral perfusion pressure above the lower threshold of autoregulation. The authors suggest the use of accurate method to measure cerebral oxygenation, such as brain-tissue oxygen monitoring, which could help individualize aggressive blood pressure control in patients with acute hypertensive intracerebral hemorrhage.

Up to one-third of spontaneous intracerebral hemorrhages (ICHs) expand, typically, within the first 6 h after the ictus. This expansion contributes to clinical deterioration and worse outcome[1-3]. Persistent high blood pressure may promote recurrent early bleeding[4-6]. Despite several reports that supported aggressive blood pressure control, reducing the risk of bleeding and improving the outcome, recent randomized larger trials have failed to prove it[7-9]. The safety of this approach has been questioned, mainly based on the concern that the perihematoma region may already be ischemic, due to local tissue pressure and have impaired autoregulation. But it may also be because autoregulation may be globally impaired after the ictus, or autoregulation may be retained but shifted substantially toward higher perfusion pressures. Based on these concerns, aggressive blood pressure reduction might lead to local or global ischemia.

There is evidence suggesting that autoregulation is retained locally in the perihematoma region. Blood flow decreases in areas adjacent to the hematoma; although, there is an accompanying decrease in metabolism without evidence of ischemia[10]. Cerebral autoregulation has been shown to be preserved in small- and medium-sized hematomas; however, it is variably shifted to higher levels in patients with chronic hypertension[11,12]. Determining whether blood pressure management prevents hematoma growth after ICH and how blood pressure reduction can be safely performed are key research priorities[13].

We present herein a case of spontaneous ICH, for which aggressive treatment of hypertension did not lead to infarction around the hematoma but globally in multiple border zone areas.

A 52-year-old black woman suddenly developed slurred speech and mild right hemiparesis. Medical history included poorly controlled chronic hypertension, and no known history of atrial fibrillation. In the emergency department, the initial blood pressure reading was 264/218 mmHg. The patient had right hemiparesis and dysarthria, and it was also noted that she was confused. After an episode of emesis she became lethargic, requiring emergent endotracheal intubation. A computerized tomography (CT) scan of the head showed a left thalamic hemorrhage (volume 36 mL, A × B × C/2) with intraventricular extension and developing hydrocephalus. Treatment to control blood pressure included intravenous labetalol boluses and nitroprusside infusion. External ventricular drainage was placed to manage hydrocephalus, and intracranial pressure and cerebral perfusion pressure were then monitored (Figure 1). 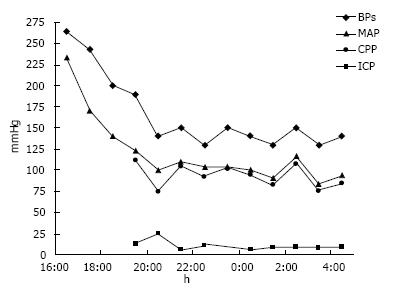 The patient underwent CT angiography of the head on arrival, which revealed no vessel occlusion. In addition, further work-up including continuous cardiac monitoring in telemetry unit in the intensive care unit (ICU) for several days, electrocardiogram and echocardiogram did not reveal any cardioembolic etiology, except for left ventricular hypertrophy. For the following days, the patient remained comatose, although examination was limited due to sedation. A follow-up CT of the head at 96 h post-admission showed a cerebellar hypodensity. Magnetic resonance imaging (MRI) of the brain showed areas of restricted diffusion consistent with acute ischemia in multiple internal border zone areas of bilateral cerebral and cerebellar hemispheres (Figure 2). No significant stenosis was found in the magnetic angiography of the neck or brain. Cerebral perfusion pressure was above 70 mmHg, except for two measurements (68 mmHg on day 2 and 62 mmHg on day 4). On day 2, intraventricular thrombolytics were administered and the ventriculostomy was clamped. On day 4, blood pressure was 110/55 (the lowest recorded) and the nitroprusside drip was reduced with rapid improvement. The patient survived, but was aphasic and right hemiparetic at the time of discharge to a nursing home. 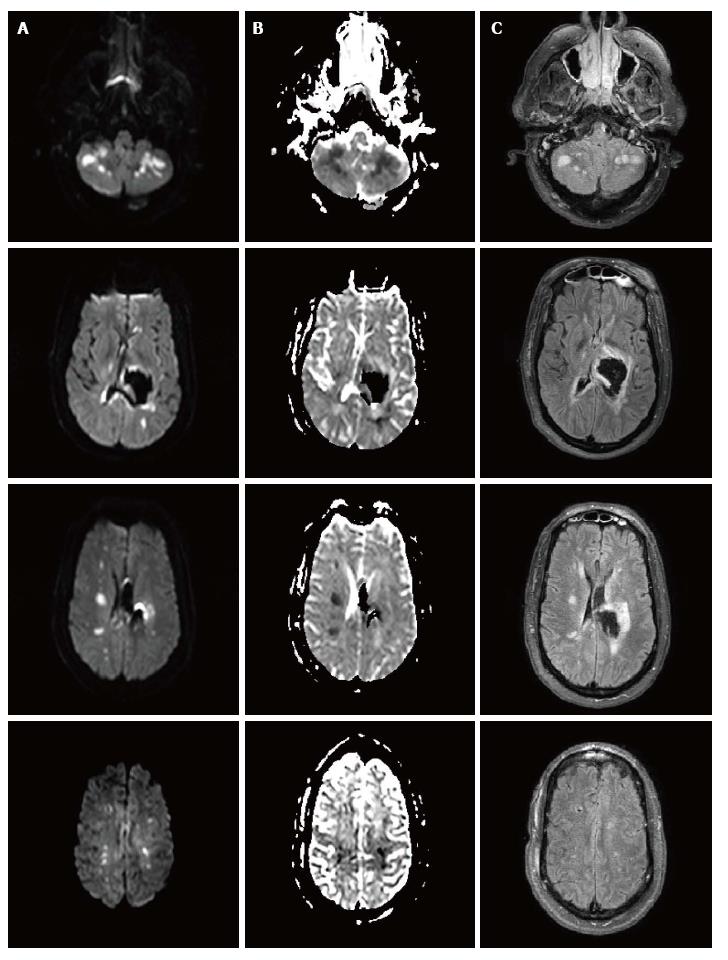 Two features in this case are to be discussed. First, global cerebral ischemia after aggressive blood pressure reduction seemed more a concern than the presence of ischemia around the hematoma; and, second, global ischemia developed despite maintenance of cerebral perfusion pressure above the lower threshold of autoregulation in normals.

The fact that the region around the hematoma was spared, with a mean arterial pressure reduction of about 50%, goes along with recent work by Powers et al[12] and Zazulia et al[14]. Although ischemia around the hematoma was initially thought to be present and to contribute to secondary brain injury based on experimental animal models[15-17], nowadays it is more controversial and it is becoming more evident about its absence, based on human studies. Using MRI, no markers of ischemia were associated with the perihematomal region in acute ICH[18,19]. Positron emission tomography (PET) studies also reported perihematomal cerebral blood flow reductions, without evidence of ischemia[20]. Reduced perihematomal cerebral blood flow was associated with a decreased metabolic rate of oxygen and oxygen extraction fraction, suggesting that flow changes represent hypoactive rather than ischemic tissue[14].

On the basis of evidence derived from laboratory and clinical studies, three phases have been identified[10]. The hibernation phase, an acute period of concomitant hypoperfusion and hypometabolism, predominantly involves the perihematoma region and occurs during the first 2 d. The reperfusion phase is observed between days 2 and 14, with a heterogeneous pattern of cerebral blood flow, consisting of areas of relatively normal flow, persistent hypoperfusion and hyperperfusion. And, the normalization phase is observed thereafter, with normal cerebral blood flow reestablished in all viable regions. In this case, hypometabolism in the area around the hematoma might have prevented the tissue from infarction.

The reduction of about 50% in the mean arterial pressure may seem unsafe; although, once the intracranial pressure was monitored, the cerebral perfusion pressure (CPP) could be calculated, and in fact it was kept above the lower range for normals. Nevertheless, strong evidence-based guidelines for the management of blood pressure in patients with spontaneous ICH with systolic blood pressure more than 220 mm Hg are not clearly established. The writing group of the stroke council for the American Heart Association encourages in their guidelines, aggressive treatment of high blood pressure to prevent ongoing bleeding with the caveat that aggressive treatment may decrease cerebral perfusion and worsen brain damage, especially[21-23]. Based on these two rationales, the recommendation is for patients presenting with a systolic blood pressure between 150 and 220 mmHg, acute lowering of systolic blood pressure to 140 mmHg is safe (ClassI; Level of Evidence A); however, if the systolic blood pressure at presentation is above 220 mmHg, the recommendation of aggressive reduction is less clear (Class IIb; Level of Evidence C). Intracranial pressure monitoring is also considered in patients with significant intraventricular hemorrhage or hydrocephalus, with a reasonable goal CPP between 50-70 mmHg (Class IIb; Level of Evidence C).

Cerebral autoregulation maintains cerebral blood flow by modifying the cerebrovascular resistance when cerebral perfusion pressure fluctuates, keeping cerebral blood flow constant in normal subjects at a CPP between 50-70 mmHg[24]. In chronic hypertension, cerebral autoregulation is shifted to higher levels and the degree correlates with the severity of hypertension. Thickening in the vascular wall increases the resistance, providing tissue protection if CPP is high; however, the ability to dilate when CPP lowers is lessened[25,26]. While perfusion pressure is calculable at bedside, quantitative tissue flow cannot be measured without employing a method such PET or a more invasive one using brain-tissue oxygen monitors[27]. Recently, it has been shown in traumatic brain injury that up to one-third of patients may demonstrate low brain tissue oxygen despite adequate CPP[28,29].

The patient presented herein developed multiple cerebral border zone infarcts after aggressive but carefully monitored treatment of blood pressure with labetalol and nitroprusside. Several modern imaging studies suggest that an internal watershed infarction is primarily caused by hypoperfusion as seen in our patient; this should not be confused with cortical watershed infarct, which is primarily caused by microembolism[30-33].

We hypothesize that the lower limit of autoregulation was shifted to higher levels secondary to chronic untreated hypertension. What is an adequate cerebral perfusion pressure in a normal subject was not so in her case, resulting in insufficient cerebral blood flow and ischemia. Alternatively, decreased cerebral perfusion pressure could have occurred during treatment of hypertension prior to intracranial pressure monitoring (Figure 2).

In conclusion, aggressive management of acute hypertension in ICH is controversial. Global but not perihematoma hypoperfusion may be of more concern in this approach, since cerebral autoregulation in chronic hypertensive patients is variably shifted to higher levels. An accurate method to measure cerebral oxygenation, such as brain-tissue oxygen monitoring, could help individualize aggressive blood pressure control in patients with acute hypertensive ICH.

No laboratory test was diagnostic; the patient, however, presented with very elevated blood pressure levels, and normal blood sugar levels.

Non-contrast computed tomography (CT) scan of the head showed left thalamic hemorrhage with intraventricular extension and developing hydrocephalus. Follow-up non-contrast CT scan of the head at 96 h showed a cerebellar hypodensity. Electrocardiogram revealed normal sinus rhythm. Echocardiogram did not reveal any cardioembolic etiology, except for left ventricular hypertrophy. Magnetic resonance imaging of the brain showed areas of restricted diffusion consistent with acute ischemia in multiple internal border zone areas of bilateral cerebral and cerebellar hemispheres; the location in the border zone areas makes embolic etiology of the ischemia unlikely. Magnetic resonance angiography of the brain and neck revealed no significant stenosis that could have contributed to the cerebral ischemia.

Blood pressure control with intravenous labetalol boluses and nitroprusside infusion. For the management of hydrocephalus and monitoring of intracranial and cerebral perfusion pressures, external ventricular drain was placed. Intraventricular thrombolytics were given to prevent clot formation in the ventricles and facilitate the cerebrospinal fluid drainage.

Caution should be advised when blood pressure reduction is considered in patients with intracerebral hemorrhage, especially if arriving with very elevated blood pressure and known to have untreated chronic hypertension. In addition, the presence of concomitant increased intracranial pressure due to the mass effect and/or hydrocephalus after intraventricular extension increases the intracranial pressure and thus decreases the cerebral perfusion pressure. Cerebral autoregulation shifts to the right in patients with chronic untreated hypertension and a reduction in blood pressure may not be tolerated leading to ischemia; therefore, such intervention in certain cases may be unsafe, as described in the article.