Today, the use of cardiovascular magnetic resonance (CMR) is widespread in clinical practice. The increased need to evaluate of subtle myocardial changes, coronary artery anatomy, and hemodynamic assessment has prompted the development of novel CMR techniques including T1 and T2 mapping, non-contrast angiography and four dimensional (4D) flow. T1 mapping is suitable for diagnosing pathologies affecting extracellular volume such as myocarditis, diffuse myocardial fibrosis and amyloidosis, and is a promising diagnostic tool for patients with iron overload and Fabry disease. T2 mapping is useful in depicting acute myocardial edema and estimating the amount of salvageable myocardium following an ischemic event. Novel angiography techniques, such as the self-navigated whole-heart or the quiescent-interval single-shot sequence, enable the visualization of the great vessels and coronary artery anatomy without the use of contrast material. The 4D flow technique overcomes the limitations of standard phase-contrast imaging and allows for the assessment of cardiovascular hemodynamics in the great arteries and flow patterns in the cardiac chambers. In conclusion, the future of CMR is heading toward a more reliable quantitative assessment of the myocardium, an improved non-contrast visualization of the coronary artery anatomy, and a more accurate evaluation of the cardiac hemodynamics.

Core tip: The increased need for the evaluation of subtle myocardial changes, coronary artery anatomy, and hemodynamic assessment has prompted the development of novel cardiovascular magnetic resonance (CMR) techniques including T1 and T2 mapping, non-contrast angiography and four dimensional flow. CMR is heading toward a more reliable quantitative assessment of the myocardium, an improved non-contrast visualization of the coronary artery anatomy, and a more accurate evaluation of the cardiac hemodynamics.

Cardiovascular magnetic resonance (CMR) has become a fundamental tool in the diagnostic and therapeutic pathways of several cardiac and vascular diseases. CMR allows for the fast and accurate assessment of cardiac anatomy and function, non-invasive tissue characterization, and blood flow quantification in a single examination. Standard pulse sequences such as T1-weighted and T2-weighted turbo spin echo (TSE) and late gadolinium enhancement (LGE) techniques are widely utilized for myocardial tissue characterization in clinical practice. T1 TSE sequences can depict fatty replacement in arrhythmogenic right ventricular cardiomyopathy, whereas T2-weighted imaging is essential for the evaluation of acute myocardial damage. LGE is important for the assessment of replacement fibrosis and pathologies characterized by myocardial interstitial space expansion.

Although the above techniques have been accepted for clinical application, the use of these sequences for myocardial tissue characterization has a number of limitations. For example, the myocardial signal intensity in T2-weighted images can be influenced by the proximity of the surface coils[1]. Qualitative evaluation of LGE images is operator-dependent and quantitative assessment is strongly influenced by the designated signal intensity threshold[2]. The value of the LGE technique may also be limited in cases with diffuse myocardial fibrosis[3]. Furthermore, it is important to note that LGE requires the administration of contrast agent and is, therefore, not suitable for patients with severe kidney dysfunction.

In order to overcome the aforementioned limitations, CMR sequences including T1 and T2 mapping have recently been developed.

T1 mapping was first introduced to detect diffuse myocardial fibrosis; however, this approach would also be beneficial in patients with congenital or acquired cardiac pathologies characterized by changes in myocardial extracellular space. In general, T1 mapping can be performed before and after contrast administration. By combining native and post-contrast T1 measurements, the myocardial partition coefficient can be derived, which allows for the calculation of the extracellular volume (ECV) after accounting for the patient’s hematocrit (Figure 1)[4]. Because native T1 correlates with ECV, this technique may allow for tissue characterization in patients with kidney dysfunction, presenting a distinct advantage over LGE imaging techniques. The variation in the range of normal native T1 values stems from the use of different T1 mapping pulse sequences (inversion recovery vs saturation recovery), pulse sequence schemes, magnetic field strengths, etc[5]. Despite this variation, native T1 mapping has the potential to play a major role in the diagnosis of a variety of cardiac cases. Sado et al[6] showed that T1 mapping improves the detection of mild iron overload. Fontana et al[7] and Banypersad et al[8] showed that native T1 values are significantly higher in patients with cardiac amyloidosis compared to healthy controls and changes in native T1 and ECV can be considered prognostic biomarkers. Additionally, native T1 mapping may be essential in the differential diagnosis of Fabry disease as well as other cardiac diseases characterized by a hypertrophic phenotype[9].

Over the past few years, magnetic resonance angiography (MRA) has been surpassed by CT angiography in the clinical arena, mostly due to its faster acquisition time and the concerns related to gadolinium administration-induced nephrogenic systemic sclerosis (NSF). However, recent MR pulse sequence developments show substantial improvement in several aspects. For example, self-navigated whole-heart MRA provides a 3D volume involving the entire heart and the great vessels with an acquisition time of less than 7 min. In addition, it depends less on patient cooperation and can be performed in a free-breathing fashion in a predictable time frame with 100% image acquisition efficiency[11]. Quiescent-interval single-shot (QISS) MRA (Figure 2), another novel development, is a robust MRA technique available for both 1.5T and 3T acquisitions. QISS MRA has shown high diagnostic accuracy for the detection of significant arterial stenosis in the lower extremities compared to contrast-enhanced MRA and invasive catheter angiography[12,13]. QISS MRA has also shown promising results for coronary artery imaging[14]. 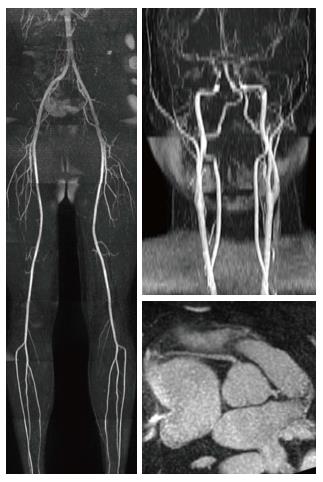 The hemodynamic evaluation of blood flow in the great arteries and blood flow patterns in the cardiac chambers also play an important role in patient prognosis, particularly in congenital heart disease assessment. Four dimensional (4D) flow is a promising new technique that proves superior to standard phase-contrast imaging by providing additional information regarding the flow dynamics in the great arteries and flow pathways in both cardiac chambers and great vessels[15]. This added information about flow pathways in cardiac chambers and great vessels has the potential to aid in identifying left ventricular dysfunction in patients with dilated cardiomyopathy[16]. In addition, 4D flow allows for wall shear stress evaluation, which helps to better understand the pathologies involving the great vessels[17].

Considering the variety of new pulse sequences and their potential clinical applications, what is the future of CMR?

T1 and T2 mapping is expected to play a crucial role in depicting subtle myocardial changes. Both techniques may help to eliminate subjectivity in image analysis. The identification of disease-specific T1 and T2 normal ranges would be a great achievement for the accurate quantification of ECV expansion and detection of myocardial involvement. Novel MRA pulse sequences have the potential to broaden the range of clinical indications, providing a valid alternative to CT angiography. Finally, the 4D flow technique may advance understanding of the pathophysiology of different vascular diseases and the hemodynamic impact of flow abnormalities, as well as help with preoperative planning. In addition, a combined T1 mapping and 4D flow approach may provide a better understanding of the relationship between hemodynamics and changes in myocardial tissue[18].

In conclusion, CMR is heading toward a more reliable quantitative assessment of the myocardium, an improved non-contrast visualization of the coronary artery anatomy, and a more accurate evaluation of cardiac hemodynamics.