Echinococcosis is a zoonotic disease. Liver is the most common site of involvement. Renal involvement is seen in 2% to 3% of patients. Computed tomography findings in renal hydatid typically include: a cyst with thick or calcified wall, unilocular cyst with detached membrane, a multiloculated cyst with mixed internal density and daughter cysts with lower density than maternal matrix. Rarely type IV hydatid cysts may mimic hypovascular renal cell carcinoma. We report a case of previously asymptomatic middle aged female who presented with mild intermittent pain and a complex renal lesion on imaging which was considered to be a hypovascular renal carcinoma or urothelial neoplasm. However, by serendipity, the patient had spontaneous hydatiduria and later was definitively diagnosed and stented. Hydatid disease should always be considered amongst the top differential diagnosis of an isolated “complex” renal lesion which remains indeterminate on imaging.

Core tip: Renal hydatid is generally secondary to disseminated hydatidoses or associated with hepatic involvement. Isolated renal involvement is far less common and reported in less than 5% of all hydatid cases. Without appropriate history a subset of renal hydatid, especially type 4 cyst may simulate cystic renal/urothelial neoplasm or other complex cystic lesions such as abscess. Radiologists must harbour a high index of suspicion and look for subtle imaging signs such as calcification and non enhancing “solid” component to include this diagnosis in the differential of complex renal lesion. Absence of relevant history or hepatic involvement should not prevent diagnosticians from entertaining this rare diagnosis.

Hydatid disease is mainly caused by Echinococcus granulosus[1]. It often manifests as a slow growing cystic lesion. We report a case of renal hydatid disease suspicious for complex cyst/urothelial neoplasm on computed tomography (CT) scan. The patient was extensively investigated and later presented with spontaneous hydatiduria.

A 42-year-old female patient, resident of central India presented with mild right lumbar pain over one month. There was no dysuria, vomiting or fever. Routine laboratory investigations were within normal range except for urinary pus cells (10-12/hpf). Ultrasonography (USG) revealed a complex hetero-echoic lesion in the right kidney (Figure 1). 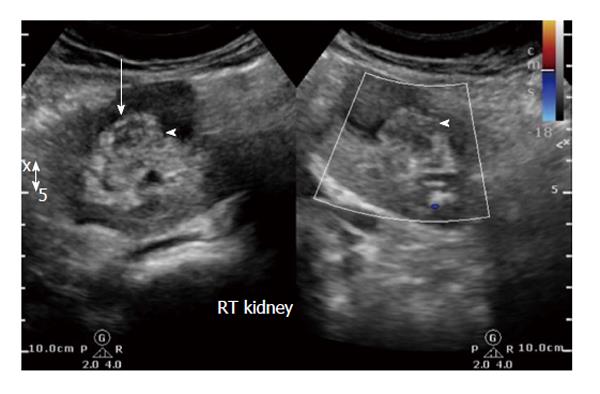 The right kidney revealed delayed contrast excretion. The previously noted cystic component did not opacify on the delayed scan. The left kidney was normal. The ureters and bladder were normal (Figure 3). 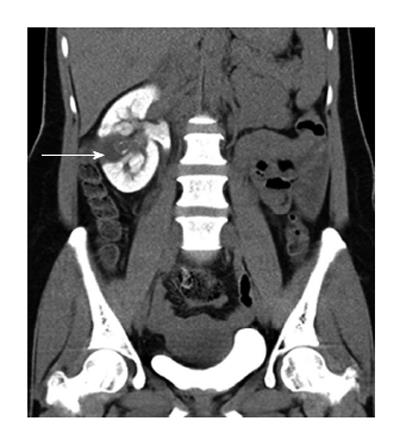 This was provisionally diagnosed as renal abscess possibly tubercular. The differential diagnosis of urothelial neoplasm was communicated to the referring general physician and urological consultation was strongly recommended.

A few days later she reported passage of fleshy/mucoid matter per urethra which she collected in a container. These were submitted for histopathological analysis. In view of high index of suspicion of a neoplastic lesion, the patient underwent ureteroscopy following which a double J stent was placed. Urine did not reveal any malignant cells. The patient improved clinically and was discharged on a course of antibiotics. 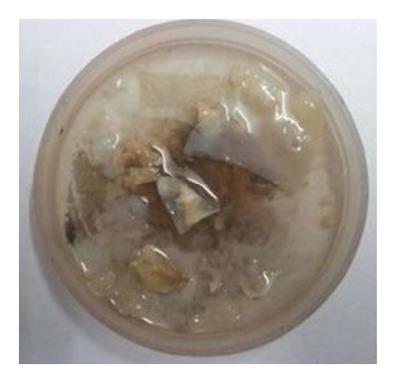 Figure 4 Photograph of the fleshy membranes passed spontaneously by the patient few days after ureteroscopy. 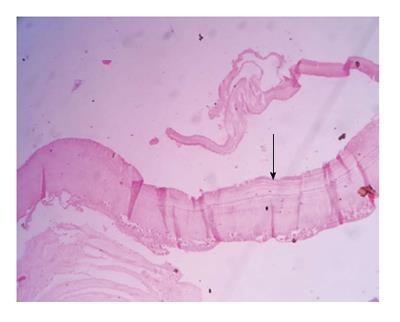 Serological test for Echinococcus antibody was done and reported as positive. The patient remained asymptomatic. Follow up USG a month later revealed resolution of the lesion. The right kidney appeared normal without hydronephrosis (Figure 6). The left kidney and bladder were normal. No lesions were detected in the liver or spleen. The chest radiograph was unremarkable. 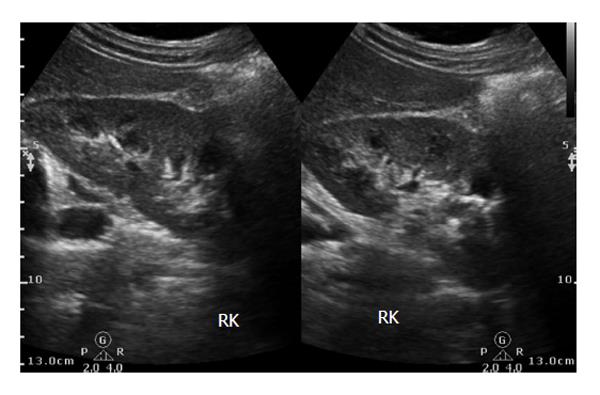 Echinococcosis is a zoonotic disease and is endemic in Mediterranean and other sheep rearing countries. However, due to increasing travel and tourism it may be found even in developed countries. In India, annual incidence of Hydatid disease per 100000 persons vary from 1 to 200[1]. The liver is most common site of involvement[2]. Renal involvement is seen in 2% to 3%[2,3].

Type 4 hydatid cysts have heterogeneous appearance similar to pseudotumor. CT scan is reportedly a problem solving modality in these cases especially as it is sensitive to calcifications and enhancement of the cyst wall[6].

Imaging spectrum of CT Renal hydatid varies and depends on stage of cyst. Typical CT findings for renal hydatidoses include a cyst with thick or calcified wall, a unilocular cyst with detached membrane, a multiloculated cyst with mixed internal density and daughter cysts with lower density than maternal matrix[4,6].

Despite multimodality imaging, in a subset of patients, no definitive diagnosis can be made and the differential diagnosis often includes infected renal cysts, abscess, pyonephrosis and neoplasms[7,8]. Rarely Type IV hydatid cysts may mimic hypo vascular renal cell carcinoma[9].

On the other hand, in endemic countries, unusual neoplasms such as mucinous cystadenoma/carcinoma may be misdiagnosed as renal hydatid[10].

Hydatiduria accompanies 10%-20% of cases of renal hydatidoses and is basically microscopic. Gross passage of hydatid cysts in urine though near diagnostic is rather uncommon and infrequently reported. We came across only two reports of gross hydatiduria in the Indian scenario - one with extensive liver and renal hydatid while the other revealed cystic renal lesion following investigation for hydatiduria. Both did not report any dilemma on imaging unlike our case[11,12].

Histologically, Hydatid cyst comprises of pericyst or fibrous layer, middle lamellated membrane and inner germinal layer which produces scolices. In patients with ruptured cysts and hydatiduria the membranes do not reveal pericyst[12].

Isolated renal hydatid involvement presents a further diagnostic challenge (as occurred in our patient). In our opinion, hydatid cyst should always be considered in the differential diagnosis of isolated complex cystic renal lesion. Absence of relevant history or hepatic involvement should not prevent diagnosticians from entertaining this rare diagnosis.

Renal hydatid may present with unusual imaging characteristics, resembling complex cyst or hypovascular solid-cystic neoplasm. This is particularly relevant in non-endemic countries wherein the Radiologists may not be aware of these unusual imaging features resulting in delayed and/or misdiagnosis.

Neither tenderness nor any mass felt.

This is an interesting case.