Congenital central nervous system tumors diagnosed during pregnancy are rare, and often have a poor prognosis. The most frequent type is the teratoma. Use of ultrasound and magnetic resonance image allows the suspicion of brain tumors during pregnancy. However, the definitive diagnosis is only confirmed after birth by histology. The purpose of this mini-review article is to describe the general clinical aspects of intracranial tumors and describe the main fetal brain tumors.

Congenital central nervous system (CNS) tumors are rare[1]. The incidence of brain tumors in newborns is 0.34 per million live births and they represent 0.5%-1.5% of all pediatric CNS tumors[2]. Many of the congenital brain tumors often result in intrauterine fetal demise, thus making the accurate assessment of the true incidence difficult[3]. The literature primarily includes single case reports[4].

In 1980 Hoff et al[5] were the first to describe a brain teratoma diagnosed by ultrasound (US) in a fetus with 28 wk of gestation. Since then, other cases of congenital brain tumors have been reported during pregnancy. Teratomas and gliomas are the most frequent of them[1].

Modern US machines and routine US scanning during pregnancy allows early diagnoses of these tumors during fetal period[6]. The association among US and magnetic resonance image (MRI) has permitted more precise diagnoses of the congenital CNS tumors during pregnancy[1]. However, the definitive diagnosis is only confirmed after birth by histology[4]. In majority of cases their prognosis is poor. Neonates generally die shortly after birth, being the survival rate about 28%[7,8]. Congenital brain tumors are usually sporadic and are not associated with other malformations[3]. The purpose of this mini-review article is to describe the general clinical aspects of intracranial tumors and describe the main fetal brain tumors.

The clinical aspects of congenital CNS tumors are entirely different from those found in older children or adults. Large studies on fetal intracranial tumors have provided data about the different histologic subtypes[3]. Congenital CNS tumors are divided into teratomas (most frequent described), and nonteratomatous tumors, including neuroepithelial tumors (choroid plexus papilloma, medulloblastoma, astrocytoma), mesenchymal tumors (such as craniopharyngioma), and others of different origin (such as lipoma of the corpus callosum and tuberous sclerosis, which may be found in cases of cardiac rhabdomyoma)[9].

The cause of malignancies that occur in early life are unknown. Fetal and/or maternal exposure to exogenous factors, including drugs, viruses, and ionizing irradiation, may initiate the biological mechanisms responsible for tumor formation[10]. Developmental errors during embryonic and fetal maturation may also result in congenital tumors[11].

US imaging is the main method used to establish a correct diagnosis during pregnancy, once a solid, cystic, or calcified lesion has been observed. It is also the best modality for evaluating fetal macrocrania[12]. The contribution of MRI is relatively limited, but it may help in determining the remaining brain structures and exact localization of the tumor, as well as in differentiating between tumors and hemorrhages[13]. The sequences performed in MRI in cases of congenital CNS tumors are: T2, T1 Fast Spin Echo, T1 and T2 gradient.

The main finding in prenatal diagnosis is an intracranial mass with solid, cystic or mixture pattern with or without visualization of hypervascularity by US and fetal MRI (Figure 1). The associated abnormalities include macrocrania or local skull swelling, secondary hydrocephalus, intracranial hemorrhage, epignathus, polyhydramnios, heart failure by high-cardiac output, and hydrops[14]. Hydrocephaly is caused by either compression of the ventricular system or intracranial hemorrhage from the tumor[3]. Unlike in older children, 70% of congenital fetal brain tumors are supratentorial and only 30% are infratentorial[14]. 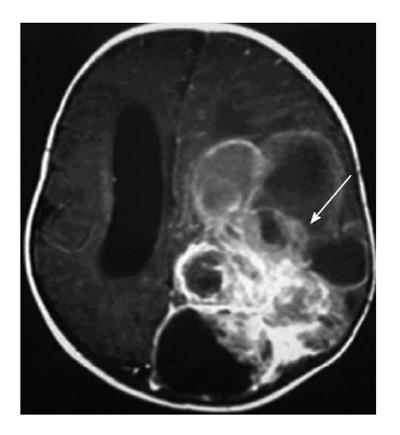 During fetal period the skull has the remarkable ability to expand, so some congenital CNS tumors can expand enormously in utero (Figure 2), probably leading to dystocia and stillbirths. Large tumors are responsible for fetal hydrops and may necessitate descompression of the cranium to permit vaginal delivery[15,16]. Cesarean section is necessary in approximately 60% of these cases[17]. 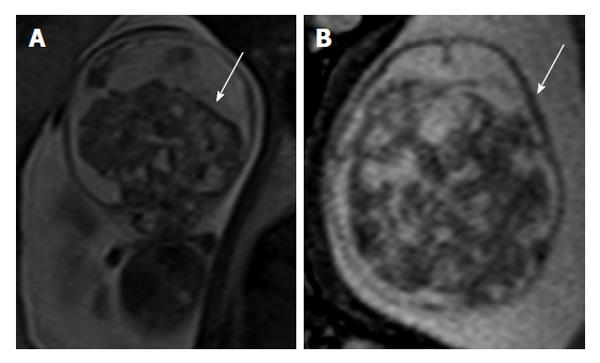 Some brain tumors are often large lesions, so it is important to assess tumoral extension by US or MRI. Precisely determining the extension of the tumor and the degree of involvement of adjacent structures is very important to determine the prognosis, the potential of the lesion for surgical resection, and the possible sequels of surgery[4]. Karyotyping is not necessary to be performed in all cases of congenital CNS tumors, however it should be discussed if other malformations are present[18]. Congenital brain tumors can mimic other brain pathologies, and main differential diagnoses are arachnoid cyst, vein of Galen aneurysm, porencephaly, schizencephaly, periventricular leukomalacia, and subdural hemorrhage[14].

Prognosis in neonates is generally poor, but depends on the timing of diagnosis and on the histological type of the tumor[14]. Teratomas are the most frequent brain tumor found in fetuses, but their prognosis is very poor[1]. Issacs et al[7,8] reviewing 250 cases of brain tumor diagnosed during perinatal period concluded that choroid plexus papillomas, gliomas, and astrocytomas of a low degree have a better prognosis. On the other hand, teratomas and primitive neuroectoderms tumors have a bad prognosis (survival rate about 28%).

When an intracranial tumor is suspected, the option for termination of pregnancy should be offered, if legally possible. If termination of pregnancy is not allowed, cesarean section may be considered. In patients with severe hydrocephaly and/or macrocephaly, the possibility of dystocia should be contemplated and cephalocentesis considered for maternal reasons. However, obstetric management should not be modified in patients with choroid plexus papilloma and lipomas[3]. Neurosurgical tumor resection and chemotherapy are possible treatments for neonatal tumors; instead, radiotherapy is not recommended in neonates[14].

Teratomas are the most frequent type of congenital CNS tumors. They represent approximately 62% of all types of brain tumors diagnosed during pregnancy[17]. The majority of fetal brain teratomas is histologically benign and generally contains both mature components from all three germ layers and immature neuroglial elements. Since the first US description by Hoff et al[5] in 1980, approximately 100 reports on the prenatal diagnosis of fetal intracranial teratomas have been published[3].

Their diagnoses are usually performed by US during the second or third trimester of gestation, being very rare the early diagnoses. The sonographic and MRI appearance of the intracranial teratoma is usually that of an irregular solid mass, in some cases with cystic and/or calcified components, distorting brain anatomy. MRI can help in determining the remaining brain structures and exact localization of the tumor (Figure 3). They appear as a heterogeneous mass with hyperechogenic and hypoechogenic features. Color Doppler imaging may be useful to show vascularization in the tumor and helps to confirm the diagnosis. Brain teratoma presents rapidly growing, and may be associated with progressive hydrocephalus and polyhydramnios. Hydrocephalus may be responsible for macrocephaly and secondary dystocia by cephalopelvic disproportion[19].

The prognosis for intracranial teratomas is generally poor, and the survival rate, which is dependent on the time of diagnosis and on the size of the teratoma, is low (under 10%)[17,19].

Choroid plexus papilloma (CPP) is a rare and benign tumor composed of epithelial cells that line the ventricular choroid plexus, and correspond to 0.4%-0.6% of fetal intracranial tumors. The incidence is inversely correlated with age, and 50% of patients in the pediatric age group are diagnosed during the first year of life[20].

CPP may develop in the lateral ventricle, third ventricle, and fourth ventricle. It is generally diagnosed during the third trimester and is always associated with unilateral or bilateral ventriculomegaly[3]. CPP has slow growth and noninvasive behavior; however, because of its specific location, CPP can block the drainage of cerebrospinal fluid and cause hydrocephalus.

An echogenic mass involving the choroid plexus is visualized on US and MRI. Color Doppler imaging may be useful to show vascularization in the lesion, facilitating the differential diagnosis of intraventricular hemorrhage[3]. MRI is also useful in differentiating between hemorrhage and CPP.

CPP may be associated with Aicardi syndrome, a dominant X-linked chromosome syndrome, defined by a triad: partial or complete agenesis of the corpus callosum, lacunar chorioretinitis, and spasms[21].

CPP has a good prognosis, but can become a carcinoma in 20% of cases, thus increasing the rate of mortality and morbidity.

Craniopharyngiomas are benign and represent 2%-5% of all congenital CNS tumors. They develop from remnants of squamous cells originating from Rathke’s pouch (ectodermal diverticulum originating from the upper limit of the oropharynx) and are most commonly found in the suprasellar region[22]. Although histologically benign, tumor expansion can cause significant destruction of the brain parenchyma and hydrocephalus.

An intracranial large echogenic mass (basically indistinguishable from teratomas) is diagnosed by US. MRI can help in determining the remaining brain structures and exact localization of the tumor (Figure 4). The head circumference may be increased because of the size of the tumor, and hydrocephalus may be present because of secondary obstruction of cerebrospinal fluid drainage[4,21]. Differential diagnoses include: teratomas, astrocytomas, and hamartomas[21].

In countries where termination of pregnancy is permitted, it may be suggested in cases of early diagnosis, especially with progressive hydrocephalus[23]. If the parents refuse to terminate the pregnancy or in countries where the law does not permit it, follow-up and elective delivery should be offered (according to the degree of macrocephaly and hydrocephalus)[24].

Fetal brain tumors are very rare and their diagnosis during the prenatal period is challenging. The suspicion of this kind of lesion arises when it is observed a space-occupying mass in the fetal brain. Modern US machines and routine US scanning during pregnancy permit early detection of these tumors during fetal period. However, definitive diagnosis is only confirmed after birth by histology. Progress in technology has contributed to early diagnosis of congenital CNS tumors, but the same is not observed with fetal surgery, perhaps because the prognosis of fetal brain tumors remains poor. Fetal medicine centers should be composed of a multidisciplinary team acting together to provide better assistance for fetuses with congenital CNS tumors and to develop new methods of treatment.